The game is about the human race in year 3102, there the whole human fleet is fighting a war in another sector of space and Earth is unprotected. At this moment the Kohlar, an old enemy, attack. It is up to you as a pilot of the M40 X pro A.C.E, or Asteroid class Explorer, to fight the Kohlar and to stop them from reaching Earth. In your fleet there are some other ship like the M50 X p.c.e and the com-ships also called "sloths".

Checkout the image page for pictures of the models you will see in the game/mod.

This is the first game, there is already a second game: "M40 X pro A.C.E game 2" and I am also working on a third: "M40 X pro A.C.E history", I will upload a little sneakpeek screenshot to the image page.
If you are interested, you can check out the second game here on ModDB.

Now you might wonder, why did he make a new game out of it and why did he change the name? I changed the name because "M40 X pro A.C.E game" is just a bit to long. I made a new game out of it to display that even though this is still that same story, it will be much more complicated. You will be able to enter and exit your ship, choose from a large variety of weapons, fly (or drive) other vehicles and aircraft, fight enemies in the air, space and on the ground, give commands to other members of your team and also to Earth soldiers of low rank.

This game will be as realistic as possible, which means that if you are bad at flight sims, this spacesim is probably nothing for you. There will offcourse be different difficulty levels which allows you to get accustomed to your ship.
There will be parts in the game where you take on the roll of a soldier to preform recon missions, if you die as a soldier nothing will happen to you as a character.

We will use the Unreal engine 3 (UDK 3) to bring our ideas to life, we can use anyone with experience in the UDK (see Employment).
This game will be a First Person Shooter but also a Spacesim so it will be difficult to make with the UDK. However since we are just fighting a large battle above Earth we can use Earth as a starting point.
Earth itself will have to be a beautiful Halo-like planet which give people the feeling that they are living on the best planet in the universe.

The story sofar, for you who haven't been following the M40 X pro A.C.E game:

We are looking for people with great skill in what they do (especially UDK3). Right now we need practically everything, modellers, coders, sound designers and concept artists.
If you have a skill commonly used in gamemaking and if you are interested in helping to make this game happen, sign up today!

I have now created a Wiki for the M40 X pro A.C.E. There you can read info about the ships and comment on the story.

It is nearly "release time" and unfortunatly I still have not found a way to make the game a complete standalone...

Finally a trailer for the first game! I was hoping that it would not take so long but now it is here.

Good news: the game is nearly finished! However there is still a minor problem. The game is based upon and engine created for another game called: STARWARS...

Basically, this is an update and improved version of the game. I have improved the models and various other things in the game. You still need the original...

This is the test version which you can play, only you will need the orignal game. You can download it for free from Bruno R. Marcos website. klick on...

This is a screensaver with pictures of the game, it also has an optional soundtrack for the screensaver. There is also an option for you to use your own...

:) funny that you should ask. yes and no, the game itself is no lego game, but the M40 X design is based upon a lego model I had build many years back so yes in a way it is a lego theme game.

Look in the image section. 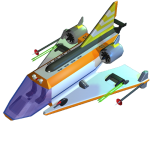