Lost Sol is a 2D strategy survival game inside a sandbox universe following the life of a spaceship's crew. As the player, you take the role of the captain, and you have to survive in the harshness of space. You must build, and take care of your ship, and crew with the resources you find.

Lost Sol follows the life of a spaceship's crew near the Earth. The crew needs to explore the remnants of humanity to improve their chances of survival. In order to achieve this, you need to research new technologies, scavenge, mine resources, manage your crew, and rescue other survivors, sometimes even dismantle parts of your own ship in an effort to keep your ship afloat.

Throughout the game, you need to make careful decisions how to build your ship, and manage your crew.

By year 2499, humanity has thriving colonies on Mars, and on the moon with lots of space stations clustered between the planets. Travel times between the planets are still long, and the journeys are dangerous. There are several stations between planets, each of them serving different goals. However, there is a new form of travel in the horizon, with two massive gates being constructed between the Earth, and Mars.

These gates were very experimental, and the plan was to create a stable wormhole between the systems for faster travel. Though the project could cut down the cost, and time, there were growing concerns about the instability of the technology. Smaller gates were created, and tested under controlled conditions, but under strain the wormholes collapsed, and created small gravitational waves. Despite all the concerns the project was continued in order to have it ready for the start of the new year, marking the beginning of the new century. The pressure was high to have the gateways operational on date.

However, on the eve of the New Year, disaster struck. The gates' power up was completed, and while the gates were activated, a massive gravitational wave started to resonate. The effects of the anomaly were unprecedented. All ships, and stations close to the anomaly were simply crushed. Those further away suffered less damages. The immense forces made the gates collapse on themselves, while the created anomaly still continued to wreak havoc. With the passing minutes, the effects of the anomaly started to tear up the Earth, the Moon, and even Mars.

After a while the anomaly became unstable, and collapsed in a violent explosion. The wave of destruction it left behind was unimaginable. The Earth, and Mars were no longer habitable, and the space around was filled with massive debris fields. The ships, which survived this apocalyptic event were now left stranded, and many of them did not have the facilities to survive more than a few hours.

However, a glimmer of hope remained. Important data from the event was shared throughout the Solar system. This valuable information might be used to develop new technological breakthroughs. There were still surviving smaller colonies like the Europa Science, and Mining Colony near Jupiter, and many smaller station colonies around the asteroid belts beyond Mars. Normally, the majority of these colonies relied on the central planets. Moreover, the communication network collapsed after the disaster. Only time will tell if the survivors are able to stay alive.

You need resources to build your ship, but your equipment need also specific resources to function. Some of these resources can be looted, refined from asteroids, or even fabricated from raw materials.

In Lost Sol, gathering resources can be accomplished in various ways. As long as your ship has enough storage, the collected resources will be stored in your ship, and they can be used to improve, and maintain the ship.

At its core, Lost Sol is a ship management game, and your crew is an essential part of this experience. Everything from building structures to exploring wrecks is done by commands given to your crew members.

While playing the game, depending on your preferences, some commands can be given automatically. You can also manually assign or manage tasks by opening the action menus. Your new orders take priority over automatically given ones, ensuring that the next available crew member will follow your orders. You can also give direct orders to crew members by having them selected while giving your order.

You have various options available, under different conditions, in your action menu.

Depending on the difficulty setting in the start of your story, the game will generate events like asteroid storms, in different magnitudes, numbers, and speeds, which will test the capabilities of your ship, and crew.

You will also face other ships, some of them will be wrecks, and might not have any active defenses, while the others will fight back. It's up to you to decide if you want to risk your ship for the rich spoils you may come across.

When I look at a typical battleship, I am amazed by the amount of crew each ship requires to function, because essentially it is the crew that keeps the ship running. I wanted to create a dynamic ship where the crew is kept busy doing important things, like keeping the ship in a good condition, repairing or operating equipment. This turns the game into a small strategy game on itself.

Lost Sol uses a special engine to assess each of your ships modules, checking information like how often they are maintained or how long they stayed damaged. It also makes calculations on how well the structure will continue to perform, if it is going to break down in a glorious explosion, or it will simply die down. It waits a handy crew member to tinker with it, because just like a neglected car is more likely to face serious problems sooner than a well maintained one, so is your ship.

This mechanism deepens the relationship between the importance of having a good crew to complement your ship, and the struggles you will be facing when designing such a large ship.

Lost Sol gameplay is divided into two different views, the ship view, and the space view. In the ship view, you will have a fixed view of your ship with building options enabled. You are able to plan new structures, control existing ones, manage your crew, and assign or control various tasks. In the space view, you will have an outside view of your ship, and you will be able to view objects all around, take direct control over weapons, and use special ship modules.

Both game views feature things like radar display (bottom right), and crew status (upper right), which can be toggled on/off. The ship status screen can be switch to full cargo view or both toggled off (upper left).

While designing the UI, I tried to avoid a text wall as much as possible. Consequently, I made most of the UI design from icons. 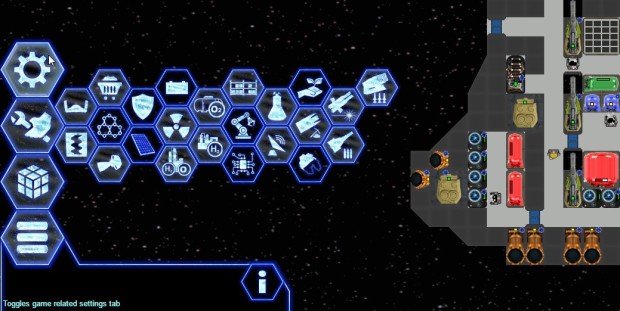 Some structures have unique panels for interacting with the structure controls. These can be anything from selecting what resources to refine, to picking new research projects. Every powered structure, which handles processes like research, refining, assembly etc. has an intuitive double hexagon design. This allows for quick overview of what's going on, how much of the progress is completed, and whether the structure is working, idle, or finished.

I think what makes a game great is also the power it gives to the players, who want to take it a step forward. Therefore, I made a powerful asset editor inside of the game for those, who want to have the core ship design experience. The in-game editor makes possible to build ships, wrecks, stations, and asteroids. For making file sharing easy for platforms like Steam workshop or forums, the editor has different options for importing, and exporting your designs in a single file format in JavaScript Object Notation. The players are able to present different starting challenges, and designs to show their skills, and techniques to the community.

When you die in the game, what is left of your ship is saved into the Relic Schematics Library as a wreck, so you have a chance of coming across your old ships in new games. 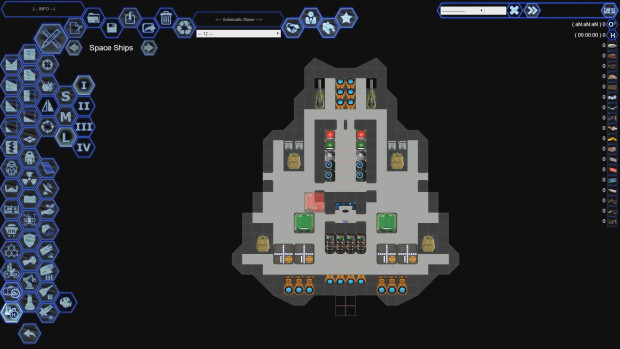 As the game continues to develop, I want to improve the game content, add new features, and improve user experience with better audio, and art.

But Wait, There is MORE

As the game continues to develop, I want to improve the game content, add new features, and improve user experience with better audio, and art.

These listed ideas below are subject to change as the project continues in Alpha stage, depending on the community response. The most demanded features will be prioritized.