Life Goes On: Done to Death

Life Goes On: Done to Death is a comically-morbid platformer where you guide heroic knights to their demise and use the dead bodies to solve puzzles. Wanting to live forever, a mighty king sends his army of knights to find the Cup of Life. On this quest, you will summon knight after knight to be brutally sacrificed.

Impale knights on spikes to create a safe path. Freeze them into blocks of ice to reach higher ground. Electrocute knights to open doors. Blast a knight out of a cannon to strategically land the body on a button. And even turn a knight into a slow-witted, violent zombie to use as your puzzle-solving friend.

As you journey through treacherous and trap-ridden worlds, you’ll show no mercy to solve each challenging puzzle.

In this game, death is not a setback—it is your only means to progress.

Life Goes On: Done to Death is Now Released!

We are excited to announce that Life Goes On: Done to Death, the game where you must die to progress, is now available on PS4 and Steam! We spent the last two years improving our original game, Life Goes On, to bring you this updated and expanded version that is bigger, better, and packed with tons of new features!

Get the game right now for 25% off the regular price on PSN or Steam! (If you own the original Life Goes On, the update is FREE!).

So What’s Life Goes On: Done to Death?

Life Goes On: Done to Death is a comically-morbid platformer where you guide heroic knights to their demise and use the dead bodies to solve puzzles. Wanting to live forever, a mighty king sends his army of knights to find the Cup of Life. On this quest, you will summon knight after knight to be brutally sacrificed.

Impale knights on spikes to create a safe path. Catch a knight on a saw blade to land the body on a button. Freeze knights into blocks of ice to reach higher ground.

You’ll also electrocute knights to open doors, blast knights out of cannons, and even zombify a knight to be your violent, slow-witted friend. As you journey through treacherous and trap-ridden worlds, you’ll show no mercy to solve each challenging puzzle.

What’s New in Done to Death?

Like the original, the fun in Life Goes On: Done to Death is figuring out how to kill knights in all kinds of morbid ways and solving puzzles with dead bodies. And now that experience is even more fun, laughable, and challenging with all the new features we’ve added.

There’s now over 65 levels (almost doubling the playtime of the original game!) within four vibrant, colorful worlds—this includes a fourth world called The Ruins that is set in the sky. 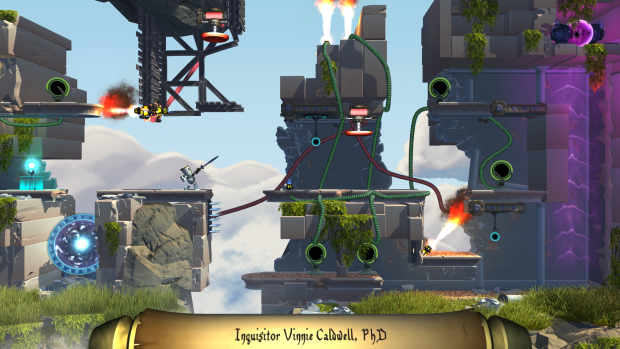 You’ll be killing so many knights, you might even feel remorse! We’ve added more ways to kill your brave knights, such as zombification and blasting knights through portals. And be careful, you never know when you might get crushed!

Unlockable hats and weapons. (Silly ones, of course!)

Can you find the Cup of Life wearing a horse head? On top of solving puzzles, you'll be able to unlock amusing hats and weapons. Your knights will spawn wearing silly hats, like beanies and berets, and wielding even sillier weapons, like dead fish and spatulas.

Did we mention that Life Goes On: Done to Death also includes a kick-ass boss fight, extra-difficult challenge levels, a map-integrated storyline, an armoury to check out all your hats and weapons, and other new features that make death even funnier and enjoyable than before?

Get Life Goes On: Done to Death for PS4 or PC now!

Buy it for PS4.
But it for Windows, Mac, or Linux.

Maybe we went insane, but for the past two years we've been updating and expanding Life Goes On. The new version, Life Goes On: Done to Death, is releasing...

Life Goes On launches today on Steam and the Humble Store!

Life Goes On had a release date!

Life Goes on will be released April 16th, with pre-orders available now at 25% off!

Sacrifice knights in new ways in the latest demo of Life Goes On, where you use bodies from previous lives to solve puzzles and make progress.

An unusual platformer that has a hint of Monty Python & The Holy Grail to it. Sacrifice yourself to aid the cause :)

The video didn't catch me at first, but when I realized the game mechanic you were implementing...
Well, that's just out of the ordinary!
I'll be watching this one :P.

This games is captvating!
Congratulations!

It's been awhile since a game on indiedb really woo-ed me, but Life Goes On really has blown me away. Nothing about the mechanics feel like gimmicks, but rather everything blends together to create a cohesive and unique experience. I honestly recommend anyone, whether on the fence or not, to download this and give it a try. If you need a little more convincing, I put together a video of the awesome experience I had with the game: Youtube.com

THE DEMO WAS SOOOOO MUCH FUN!!! This is such an innovative game!!! I can't wait until it's released! I would type more but I need to play the demo again O_O

Played this a while back and couldn't stop. It's just so unique. There is an old review over at Indieview.co.uk

Hi ! Really enjoyed the demo and can't wait for some updates, you got yourselves a real gem here :)

I talked about it in "Projets Indie", a french series about indie games which you can see here Youtube.com

Good luck for the game !

Life Goes On, a game where you may sacrifice your character, so that the next in line can use your dead body as an advantage.
Talk about, over my dead body...
Indiespotted.com

Twitter
Tags
Embed Buttons
Link to Life Goes On: Done to Death by selecting a button and using the embed code provided more...