Lethe is a first person adventure with survival horror elements. Explore an atmospheric and frightening world and uncover the dark secrets of your origins.

Each Episode is considered to be a stand-alone experience. Any future Episodes will expand upon Lethe's lore and backstory, but not necessarily the same protagonist's story.

Crushed under the debts of his recently deceased step-father, Robert Dawn, a journalist with an unremarkable career, decides to hunt down his origins. Everything points to a quiet mining settlement. Shortly after his arrival, Robert comes into contact with an unknown substance and develops psychokinetic abilities that feed on his life energy. As tension rises, he is faced with another, even darker threat, quickly turning the trip into a terrifying battle for survival.

Today we at Faber Interactive and KoukouStudios are very happy to celebrate the first year since the release of Lethe: Episode One and a 50% anniversary sale will be running on Steam as part of the week-long deals. If you didn’t have a chance to play the game yet, it’s a great time to try it out now. There have been several updates since day one, including Steam Achievements support and several optimizations and improvements.

And some exciting news: The announcement of Lethe 2: Origins. 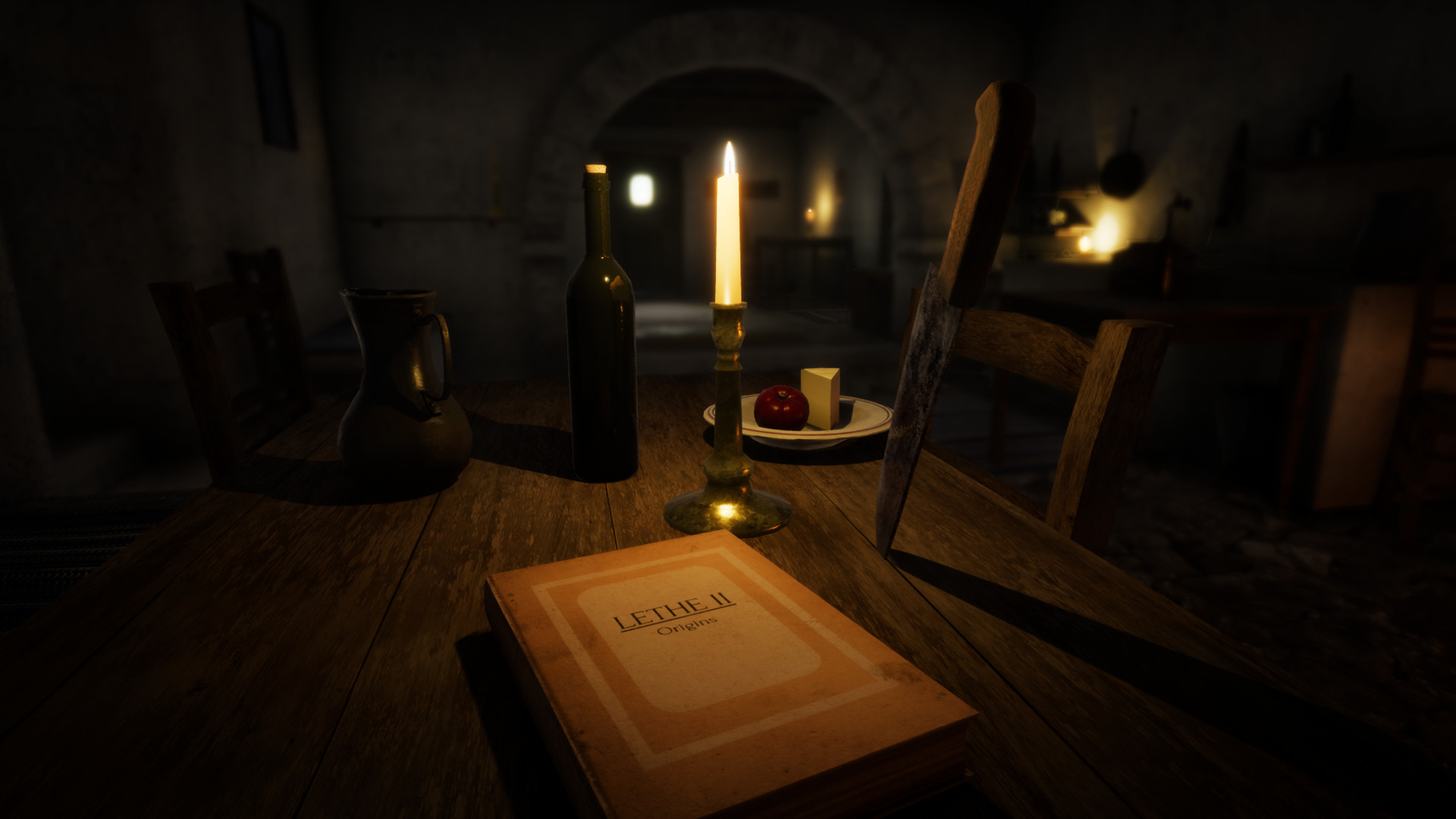 Lethe 2: Origins is our new title currently in development. The game takes place in a remote village on the same island as Lethe: Episode One but 30 years earlier.

If there’s one thing that we think we nailed in the first game, it is the atmosphere and that’s something we are passing over to Lethe 2. There’s a great difference between the two games though. Unlike its predecessor, in Lethe 2: Origins, storytelling is the place where everything else meets while gameplay is knitted around it. Another big difference (undoubtedly welcomed by many) is that the world is no longer limited to underground interior spaces.

As you might have already noticed, Lethe 2 doesn’t include the word episode. Yes, we have abandoned the episodic approach and there are two main reasons for it:

When we started with the development of Lethe: Episode One the story was screaming for further future expansions. That’s when the idea about the episodic approach came along. The plan was to make three standalone episodes that didn’t necessarily rely on each other but in the long run if put together, they would explain parts of the story that in some episodes would remain unclear. Unfortunately even though we were pretty clear about the standalone nature of each episode, people were scared away by it and the episodic part of the game’s title costed us a large number of sales. Knowing that even AAA developers have failed to deliver episodic games before, we don’t blame them.

Lethe: Episode One was developed on the Unreal Development Kit. Since Epic Games abandoned the project and moved to Unreal Engine 4, our best bet was to follow suit. Migrating the project to their new tech and developing new features took an extra amount of time, adding up to a new project already detached from Episode One that can no longer be considered an episode.

We can’t give away much just yet so let’s leave the topic here for now. There’s more to come in the near future as we push forward through development.

Let’s take a look at what happened since August 1st 2016.

With YouTube overflowing with search results after typing “Lethe: Episode One” in its search-bar and over 2,6 million views on a single gameplay video by Markiplier, we are more than happy to have invested in the project.

Unfortunately the popular press totally ignored the game and not a single of our attempts to contact them was ever replied (Episode One made it to Metacritic but got stuck with just two reviews and never got a rating because of it). Considering that we didn’t have any insiders or the power to fund a place on their pages that was to be expected. On the other hand the medium/small press guys gave us a very warm welcome in the industry and we’re still very thankful. User ratings have been very encouraging too, summing up to “very positive” rating.

With Lethe we aimed towards a specific audience interested in slow-paced atmospheric horror. A good number of them embraced our work and offered their valuable feedback for further improvements. Sales haven’t been as pleasing as we hoped for, but a small cult has formed around the title.

While the quality standards for Lethe: Episode One are far higher compared to several top indie game sellers for 2016, with 7500+ units sold on PC to date it isn’t exactly considered an indie financial success. Yet, given the size of our team at the time (2 core developers and 3 freelancers) it has done far better than the average median indie game, while in the meantime we are able to keep our small studio running solely on the gas our sales provide. Once again thank you for supporting us in this journey.

I believe that the low number of sales can be brought down to three reasons (I’m certainly not an analyst though and I’d be very interested in hearing your opinion on the topic).

Lethe: Episode One was never given a proper promotion campaign. We’re a very small studio and by the time we reached that point we had already invested all we had in the production. We went this far thanks to the word of mouth and your support, and we’re very grateful for that.

As already stated above, even though we were clear about the standalone nature of each episode a lot of potential buyers were scared away by the episodic title. Some even stated that they like the game but they won't bother buying until all episodes are released. Of course that’s a double edged knife for a small developer like us. Reduced sales usually mean that future releases are less likely to happen.

2010 introduced the second “survival horror apocalypse” in gaming. And alongside the “indie apocalypse” it spread so fast that by the time Lethe: Episode One came out the audience was already fed up with “run and hide simulators”. On top of that Steam is still flooding in extremely poor-quality horror projects. It’s not a wonder that people are cautious when it comes to products by new developers nobody knows. Going for a mainstream horror game by an already popular developer reduces the risk factor of wasting time with refund policies.

It’s sad but yes, piracy is a huge issue for us. By the end of 2016 we tracked down an approximated number of 25000 pirated copies of Lethe: Episode One. A number that is already more than three times greater than the current legit sales and rising twice as fast.

When considering that with the added income we could have hired a few people to help us with our next production, instead of working an average 10 to 12 (and sometimes even 16) hours a day… Well, it’s disappointing at the very least. Unfortunately there’s not much we can do, other than hope that those people are at least planning to buy the game in the future if they enjoyed it.

If we take in account that Lethe: Episode One came out of the blue, without any sort of a promotional campaign and from an unknown developer, we can safely say that it performed fairly well. Though in the long run the financial uncertainty spreads in the air more often than we hope for. It certainly doesn’t help with clearing out our worries and to focus on the development of our next big title, but as long as we manage to keep the number of sales stable until the release of our next installment we’re very positive that everything will end well. As a safety measure though, we're currently also examining possible alternatives when it comes to funding the project. Any suggestions from the veterans among you are most welcome.

-Fixed a crash that could happen when the Steam client is in offline mode or when disconnected from the internet.

We have collected the most commonly asked questions about Lethe: Episode One and compiled them into this FAQ.

By ignoring their current community rating, we decided to create a top ten of what we believe to be the best user screenshots to date.

Looks cool! Thanks for the giveaway!

Awesome game so far! Already can't wait for episode 2 which they recently announced that it's in the works

I'm interested in showcase it. I'll communicate soon with you guys.
Looks amazing so far :]

this looks so damn beautiful

Twitter
Tags
Embed Buttons
Link to Lethe - Episode One by selecting a button and using the embed code provided more...

Lurking In The Dungeon Adventure