Posted by RocketJumpTechnology on Nov 18th, 2018

Welcome to the monthly King under the Mountain update for November! This month marks the start of dedicating myself full-time to game development thanks to the funding brought in from the Kickstarter campaign, so thank you so much to those of you who pledged (or have pre-ordered the game), it really is a dream come true! First up, the headline feature currently in development is that your settlers now need to eat food, so here's a video showing how a cauldron of soup is shared among the population:

This marks the start of really needing to care for the well-being of your settlers - although they currently sleep, they don't get unhappy from sleeping rough (that's coming very soon). While they can't quite die yet (that's coming soon too!) I think this will mark the beginning of King under the Mountain switching from something of a tech demo to an actual playable game.

In other updates this month, there's now an options menu in the game(!). It really shouldn't have taken so long, but now you can set the game's starting resolution and if it should be windowed or not on launch, as well as some other settings. The main one is that we've added automatic crash reporting to the game, so any time the game crashes for a player who has opted in to it, we'll receive a report on what went wrong and be able to track it down and fix the problem. Due to privacy laws, this needs to be opted into rather than on by default, so the first time you start the game now you'll be presented with this message: 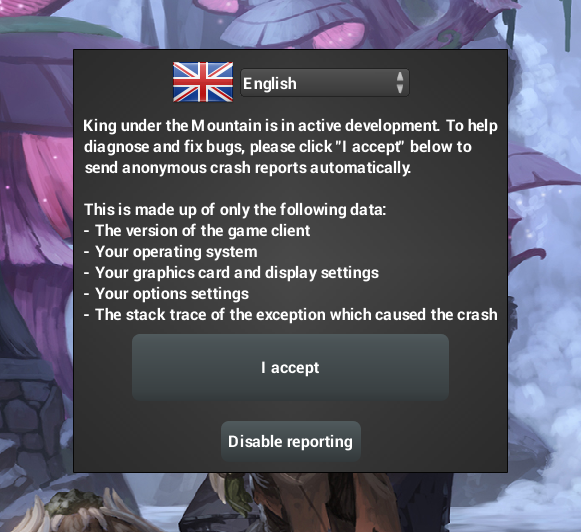 Also until now, your settlers have only a single profession assigned at a time, i.e. they're always just a miner, a farmer, a carpenter, etc. The interface has received something of an upgrade to both display the current needs of the settler as well as an option to add or change professions:

Those buttons showing the profession can be clicked to bring up the change profession window: 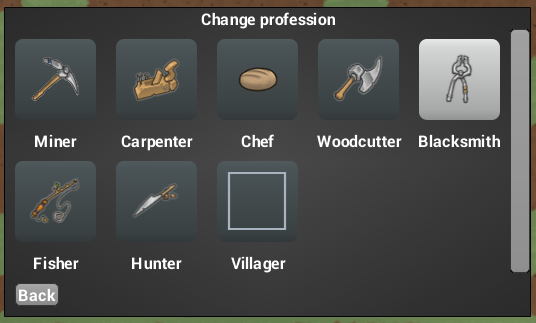 All of the implemented professions (technically fishing and hunting isn't really implemented yet) can currently be freely switched between, but in the future it will depend on the background of the settler and other unlocks based on progression in the game. Also, having experience in a profession (different skill levels) will be very important, but this is coming later in the early alphas roadmap.

Trygve is now a blacksmith!

The eagle-eyed among you will have noticed there's "30 rockbread rations" among this settlers' possessions. Your starting population bring their own rations to start out with, but it'll be up to you to plant enough crops to keep them fed through the winter and the following year!

Finally there's been several bugs tidied up with the help of the community (get involved on our Discord server) and something of a bugbear for players has been fixed - Until now if you queued up the construction of some walls they would all share available resources equally, leading to usually none of them being completed and it being a pain to sort out. Now, they much more sensibly assign resources so as many as possible are completed and the remaining constructions wait until more resources are available before deciding what they should be built out of. Here's a video to explain:

The rest of the month will see me finishing off adding the need to eat food, including the option of baking bread instead of having to cook soup all the time. Looking a little further ahead, I'll be finishing off the other key features to mean you really do need to look after your settlers now - they'll need to drink as well as eat, be kept happy, or else they'll die!

That's all for this month - despite now working full time on King under the Mountain it's only been a single week, so I hope to have much more progress to share next month. See you then!