IsoChronous is a strategy action game with a mechanic based on time layering. In a battle 2 players play against each other with an army of a king plus 4 units. Each battle has 4 time layers. In each time layer a new unit is added to the battle and it’s controlled by the player. When the time layer finishes after 30 seconds everything rewinds and the battle starts again. The movements that the players did are recorded so with each new time layer, their previous units repeat exactly the same they did when they were controlled. The 4th time layer is the decisive so the player which ends having a king with more life is the winner.

Thanks for voting and helping IsoChronous on it's quest to become the 2021 Indie of the Year. You are now in with a chance to score some free games. Help this game secure more votes by embedding the widget (or link) we have included below on your favorite sites.

If you watch people playing your game you can observe some common behaviours These have been developed in our minds due to several years of experience with games and human-interaction which have led us to well established gaming and interaction concepts/behaviours. One of these well established concepts is death: if you die, you start again. But what happens if that doesn’t apply to your game? Well, you are in trouble if you don’t communicate them properly to your players. In IsoChronous we introduced some mechanics that broke with well established concepts in games. Bellow there is a list of these mechanics and how we tried to deal with them in order to make them enjoyable and understandable.

The ghost mechanic or explaining the player that even dead he can continue moving and attacking but not being able to interact with the rest of the units in battle (you can read more about the ghost mechanic here). In most of the games, when you die you have to wait to start again, but not in our time-traveling game IsoChronous. To amend this problem we decided to use the obvious metaphor of it: being a ghost, that is also what other games have used (World of warcraft, Dark Souls, Soul Reaver). The problem we encounter is that most of the mentioned games also modify the look and feel of the environment giving like some sort of implication of “ghost view”. This visual reinforcement sure helped them but it was not suitable for us since both players are sharing the same screen (it could be applied for an online mode, but we prefer the “offline” mode, where the 2 players are together and can see, yell and smash each other).Right now we decided just continuing with the individual ghost metaphor by doing an explosion followed by a grave that comes out and converting the player into a ghost:

The problem is that we have experienced that some of the new players either don’t realize that they are dead or they stop moving when the character dies. We introduced even more details apart from the mentioned ghost appearance, to reinforce the idea: we disable the gamepad vibration that happens when you are alive and you deal damage to another unit, the thrown projectiles don’t collide with the environment as they do when you are alive…

Finally, to address the problem of people that stop playing when they are dead we make a message pop out and blink when the dead player keeps his unit immobile. 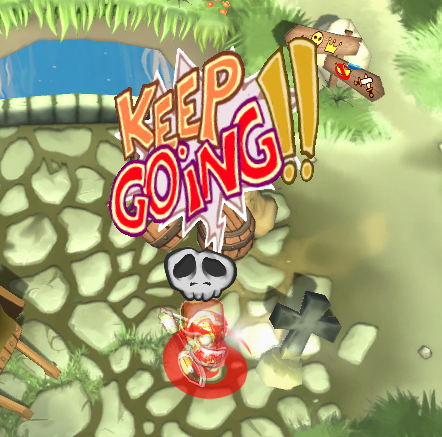 Time rewinds at the end of each round. In most of round based games when one round finishes the next one is completely new but in IsoChronous when a new round starts the previous actions already have effect in the world. We represent this fact with the time travelling but we could have used any other metaphor like saying that each unit was some sort of robot that recorded what it did and repeated it again and again. We chose the time travelling explanation because is easier to represent graphically, and we wanted the player to discover the mechanic by himself without many textual help. To make more clear this metaphor, we added a rewind effect similar to Braid (either visual and with the music) with some visual reinforcements (clouds on the ground of the island and the mid river which go backwards when time goes back in order to help the player understand that time is rewinding).


Now the problem was letting the players know that the previous units would repeat what they did and that they were not controllable any more, since in most of the games where you have several units playing you can change between them (either just having one of them at the same time in the battleground like in Tatsunoko vs Capcom or having all them like in LEGOs or RTS in general). What we did was to lower the contrast of the previous units as well as putting a marker on top of the current unit. Also we kept the previous units in front of the tower and when the new round starts you can see how to new unit comes to the battlefield while the others are still there. All this to emphasize that the current units and the previous ones are not the same. Other things we tried were some footsteps that appeared in front of the previous units advancing its nexts movements and giving the feeling of being following a path (the one recorded when you controlled it), but we had to remove this as it was more chaotic and confusing than helpful.

Rounds vs time layers or wining a round doesn’t makes you win anything. One of the things that we wanted to change in IsoChronous is one of “problems” in having rounds: imagine that you are battling to the best of 5 rounds and you have lost the first 2. This situation, depending on the person, can provide a feeling of despair since you have to beat all the next 3 rounds without failing. As stated, depending on the person this can be seen as an extra motivation to do your best but we wanted to experiment and see what happened if we tried to change this by making only the last round the decisive one, removing all feeling of despair (if you lose firsts rounds it doesn’t matter because you can change the results in last round and also if your unit is defeated in the current round you can continue using it so you are never useless). The first problem we saw is that if you use the term “round” players directly imply that the one of them who wins more rounds is the final winner. To prevent this we had to come up with a different word when we wanted to refer to rounds, so we decided to use “time layer” instead as this was a new concept that attracts the player’s attention and helps them understand the game. Also it helps to explain the time-travelling thing: you add a new layer to the existing battle so all rounds happen at the same time-lapse (that’s where the name Iso (same)+Chronous (time) comes from)) 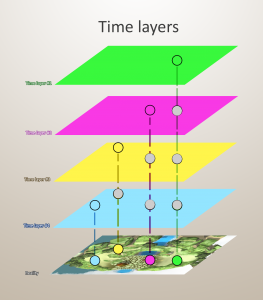 There are plenty of well established concepts and interaction methods in players minds and dealing with ones that break with them or provide new ones can bring some extra design problems, but at the end this is worth it, either for the developers which will have to think and deal with problems that help them improve, but also for the player which will be thankful to see something that defies and presents new concepts. Because at the end is by dealing with new concepts that we learn the most and experience a richer and more stimulating interaction. Good examples that experimenting and trying to break classic mechanics is beneficial include interesting games like: Braid (different interactions with the space-time), Journey (non verbal communication between players), The marriage (games as art), Miegakure (exploration and understanding of 4D spaces), Bara Bari Ball (8 jumps instead of the typical double jump), Storyteller (storytelling as a game mechanic), Johann Sebastian Joust (no-graphics game), SpyParty (detection of human behaviour) and Antichamber (exploration of non-Euclidean spaces) to mention some of them.

“What if you could change your fate not by changing your actions, but with the actions of others” The state above shows our positioning in how we...