Build a village, create an Empire! 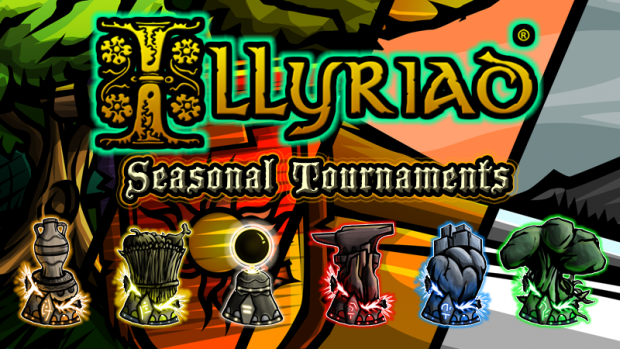 In honour of Illyriad's 10-year anniversary (the game launched in Public Beta on Feb 22nd, 2010 - I had to look it up on google!)... we're extremely excited to introduce regular King of the Hill-style tournaments to Illyriad with a truly worthy reward - REGIONAL TOTEMS. These totems introduce further potential for long-term, alliance-level, inter-regional, military- and production-based strategies.

The Seasonal Tournament runs 4 times a year, every year, covering the entire months of:

The tournament squares will randomly move within each region at around 10 minutes after midnight (Server Time - UTC) on:

These are our signature king-of-the-hill tournaments, one tournament square per region - but with a major addition: totems.

The following rules are the same as they've always been for dev-run tournaments, and you can skip down to the REWARDS section if you're fully aware of how our king-of-the-hill tournaments traditionally run.

Credit is based on the length of occupation of each square. Time occupied by an alliance on each square counts towards the Alliance total.

This credit is on an alliance basis - individual players cannot receive rewards from participating in these tournaments.

You are not allowed to leave your alliance, or be kicked from your alliance while you have any armies present on one of the Tournament Squares.

The alliance that holds each individual regional square for the longest period of time during the tournament month is declared the Regional Winning Alliance for the tournament.

All activity on these tournament squares in each region will also be aggregated, so the top 3 alliances that overall have the most amount of possession across all squares will be the Global Winning Alliances, ranked First, Second and Third.

All tournament activity will be summarised on the tournament pages ingame, as usual.

The First, Second and Third Global Winning Alliances will receive a medal customised for their level of victory (Gold, Silver and Bronze respectively), as well as the Season and Year of victory embedded into the medal design.

However, the really serious reward here is for each Regional Winning Alliance.

Each Regional Winning Alliance will get to choose a REGIONAL TOTEM - an incredibly powerful and valuable landmark that will operate until a later winner chooses to change it.

Once chosen, each region's totem provides an effect on ALL CITIES located in the entire region, until replaced.

Please note that - once chosen - the totem CANNOT BE CHANGED UNDER ANY CIRCUMSTANCES until the next regional winner of the next tournament chooses to change it.

So, to summarize... as the Regional Winner of any one of these tournaments, you can set (or remove) an additional bonus that applies to all cities in the entire region you won. That's pretty powerful!

There will also be a new satellite button off the World Map icon on the top of your screen, which will take you to the Regional Summary page.

This page will summarise (once the first Regional Tournament is completed) the current Regional Winning Alliance, the totem they've chosen, who precisely (in the Regional Winning Alliance) chose the totem, and when it was chosen. There will also be a link to a Regional Detail page, which will summarise the entire totem history for each region. This satellite button and link are not yet live.

Q. If our alliance wins a region, do we have to make the choice of totem within a certain time period?
A. No, you don't. If you don't make a choice, then whatever the existing totem is will continue to run for that region until a choice is made, or until the next tournament - where a different alliance might win the region, and wins the right to choose a new totem.

Q. If our alliance wins a region, who in the alliance gets to make the choice of totem for that region?
Any of the Regional Winning Alliance's SuperUser player accounts will be able to choose the totem for the region after the region has been won.

Q. Alliance SuperUser X made a mistake in choosing our totem! Can we choose again?
A. No. This is VERY important; the first Regional Winning Alliance SuperUser who chooses the totem has cast the die for the whole alliance - and for the whole region - until the next tournament, where they can choose again if they win, or some other winner can choose the totem differently. There's a big "ARE YOU SURE?" popup to confirm the selection. You can't come back to the dev team and say "But we really wanted X totem, this person messed it up!". That's tough luck; and perhaps that person shouldn't be an alliance SuperUser :) Choosing the totem and bonus for all player cities in the entire region is a great responsibility, and shouldn't be taken lightly.

Q. I don't participate in tournaments, why should another alliance have a say in what bonus I get?
A. This is why the totems are either neutral or positive bonuses, rather than penalties. They have to be this way, because they apply to ALL cities within the region. We don't want to penalise players who, for whatever reason, choose not to participate in a tournament. In the end, everyone either stays resource neutral (if the "Inactive Totem" is chosen)... or they get something distinctly useful, chosen by the Regional Winning Alliance. As a neutral/non-tournament-participant you get status quo - or upside, but no penalty.

Q. Why is the February tournament called Spring as that seems more like Winter to me, same with the August tournament for Fall?
A. This is because the tournaments run for a month before the next Illy season and environmental bonuses kick in. So the change of totem matches the Illy seasons.

The Illy Seasons are:

Q. Does this mean that the tournament squares are going to rotate reliably every 3 months?
A. Yes. We think this is a great idea, as sometimes alliances organise their own mini-tournaments or battle practices on the tournament squares, and we've had player-run tournaments in the past. So, having a reliable tournament schedule is important for players to know, so that they can be confident that we won't just rotate the squares in the middle of something they've organised themselves, be that battle practice, or a war.

Q. These totem bonuses are great and all, but they're pretty generic resource-driven ones. Will there be more interesting totem bonuses available in the future?
A. Yep. We're just starting with these ones as proof of concept; but we have plans to introduce different totems with radically different regional effects in the future.

We hope you all enjoy this new feature of Illyriad, and thank you for your continuing support!

Research and discover up to 125 new pieces of equipment, completely changing the face of warfare across Illyriad.

Illyriad is now on Steam Greenlight!

I came to this game with the demise of LoU. I think it is a fantastic game! The slower pace can take some getting used to, but it is well worth it. The community is simply top-shelf.

great game but needs more players and more pvp action, needs to clear out inactive players quicker and give more reasons to play the game after reaching max cities

totally awesome. get into an alliance, grow and prosper and get to 10 cities. that is the most highest honor as a single player. then there are more than 5 ways to play.... and each and every one of them are needed in an alliance. you are home and part of a special family.

one of the best games of all of the games that I have played on the computer in the last 10 years. The staff should all be proud for the time they put into the game and working out all the problem. This is a game I plan on playing for a long time

There is not another browser game like this. As a matter of fact, it is hard to believe it is a browser game at all. The depth is incredible. It also has the best community of gamers that I have ever seen. I did a lot of research on games before I tried this one, and I have not regretted it one bit. And it is definitely not pay to win.

Best broswer MMO game there is period. I have tried many games and could not find anything quite like this one.

This isn't the same kingdom from Twelfth Night is it?

Nope, but we are working on a second title called Age of Ascent, a space MMO that is also browser-based.

I'm not convinced to try it out just yet... I've seen and played a lot of other browser-based games and did not like them one bit.

How heavily-based will this game be on Pay-to-Win? I have always found that having the limit on how many times you can do things until you "recharge energy" was frustrating, especially when the game constants hints that you can always just go buy special coins that you can use to purchase more energy immediately....

As outlined in our principles: Illyriad.co.uk

Pay-To-Win
Yes, the dev team has bills to pay and mouths to feed but so, actually, do the players.

Games that allow "Pay-To-Win" are short-term and self-defeating for everyone.

I'm glad to see that the you have the right mindset about microtransactions, but I've seen many other devs also say the same thing where they promise that their microtransaction strategies will not unbalance the game for those who don't pay and yet it ultimately does either because it is not balanced properly or anything.

I am not saying that this game will be like that, I am hoping for the latter because if there is a method to make a great F2P game with microtransactions without unbalancing the game, it would be awesome for both devs and players like stated in your principles. But at the same time, doing so is going to be a hard task, which is why I am highly skeptical.

This is a promising looking game overall and I would never try and discourage anyone with such talent and passion to design a game and put their heart into it. I wish you the best and I will check up on the status of this game and try it out every now and then. :)

I can tell you as a player that the bonuses gained by paying are small, and largely cosmetic. They will make a noticeable difference in your growth and expansion, but by far the most important factor is how you plan out your cities, and the quality of your alliance.

I thought the game was very heavy on Pay-to-Win.

A wonder game, where older players keep guiding, sending free resources, and support with whatever it takes!
A real passtime, without wanting to waste real money.
enjoy... it gets addictive

Battle for the Galaxy Grand Strategy