History of the Demon Girl

You are Roku, the Demon Girl. A mysterious oni named Sam releases you from your icy bondage in the lowest level of Hell and helps you to escape by telling you were to go next and how to break through barriers to the upper levels. There are 9 Circles in Hell and therefore 9 distinct areas which Roku must race through to rise from the Underworld and once again walk the Earth. Each area will contain 4 stages, amounting to 36 levels of high speed action. Race against the clock, running down demons and monsters in your path, grabbing powerful, speed-increasing tokens, and avoiding all of the traps the Dark Lord and his minions put in your way. It is within your power to feel the warmth of the living world once again, but you must go NOW.

For more information visit the Silhouette Games Devblog, and for further details about History of the Demon Girl, including how it began its development process, head over to the article on ORCZ!

Kickstarter Alert!!! Only 4 Days Left to Back!!!

Kickstarter Alert!
FOUR DAYS TO BACK!

There are only FOUR DAYS LEFT of the Kickstarter campaign and right now it will take every possible backer I can find to make this game become a reality. If you're a watcher and you can help, take a moment and become a backer using the widget below! Thank you for your role in making this game come to life!

If the campaign doesn't meet the goal then it pretty much means that the release will be delayed indefinitely. There's no telling when I'll have time to finish the game without the proper funding. It's sad but true. This project NEEDS your support. Thank you for helping, if you can!

If you can't support the game financially, but you have a twitter account, then today is the day to Tweet @Kickstarter for the project. Just tweet "Hey, @Kickstarter! Feature History of the Demon Girl! Kck.st" If we can get that going around enough it might help the project get featured and with more attention we might make it in these final days. $5000 is a long way to go, but campaigns have done it. It is possible!

In other news, I've been working on more art for the game. You may have noticed a couple of images popping up, but I haven't explained them. Here's the WIP background art for the new ending to the 9th Circle: 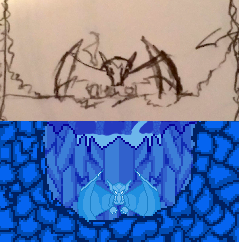 You can see the original sketch as well as the current version. I think it's coming along nicely. This background will have a bit of animation when it's finished. Here's an older version done as an animatic:

I think the game is going to look really beautiful when it's done. I've also been working on some of the character animation for the 8th Circle. Here's the walk cycle for the hypocrites:

These little guys will just sort of saunter towards Roku, but if she bumps into them, they'll stop her cold by turning completely to lead:

The game still has a lot of work left to be done, but I'm doing my best to work on it every single day. I think that when it's done it will be one of those games that you really remember for having a complete style unique to itself. I really hope that you agree and that the game can find its funding.

Thanks for supporting the project in whatever way you can!

The title says it all! Only 10 days left in the Kickstarter campaign and the game needs backers now more than ever! Check out some of the new art, the...

We have a little less than half the campaign left, but we're going strong at 21%! Statistically we're in a good place now! I'm still working on the game...

The Kickstarter campaign is halfway over, but I'm still devoting every waking minute to working on the game. This update includes all new screenshots...

The game has been receiving some really great press from people lately! Meanwhile the Kickstarter campaign has really lost steam... Speaking of Steam...

The 2.0 Demo will likely be the last demo before the full-release. This version includes the ability to skip the intro and stat screen, adds the Boost...

The 2.0 Demo will likely be the last demo before the full-release. This version includes the ability to skip the intro and stat screen, adds the Boost...

The 1.2 Demo update changes the game from a projector file to Adobe AIR release. This removes the ability to use "Next Step" and also presents the game...

The 1.2 Demo update changes the game from a projector file to Adobe AIR release. This removes the ability to use "Next Step" and also presents the game...

The day has arrived. Please enjoy the first release of the History of the Demon Girl Demo! This is the Mac version of the game. Please let me know if...

The day has arrived. Please enjoy the first release of the History of the Demon Girl Demo! This is the Windows version of the game. Please let me know...

Twitter
Tags
Embed Buttons
Link to History of the Demon Girl by selecting a button and using the embed code provided more...

Lust from Beyond: M Edition Adventure