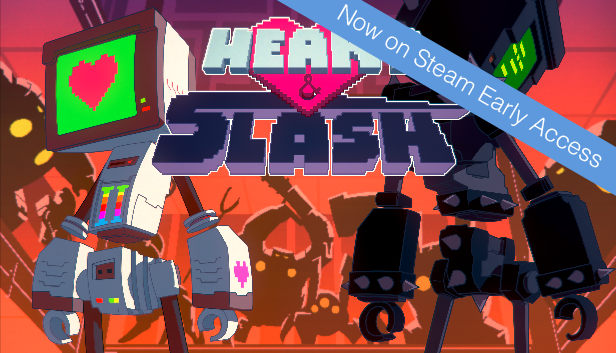 Humans are long gone and all that remains are machines, working through the motions set-up by their masters many ages ago. Their sole priority is to ensure everything complies with the obscure standardization protocol, under the supervision of the all-seeing robot leader Quality Assurance System (QuAsSy).

But not all robots are the same. Maybe a result of faulty wiring, there are some willing to stand for themselves, to resist conformity and find their identity.

This bleak lifeless world doesn't cut it. You are Heart and you want MORE.You want to become so unique and dashing that nobody will dare look away from you.

HEART&SLASH; is a fast paced brawler with roguelike elements, inspired in equal parts by Bayonetta, Megaman and ADOM. It is also a throwback to our earlier years as gamers, when playing games was all joy...

Started as a personal part-time project (you can follow the development process here), Heart&Slash; has grown into something bigger than initially intended. From a one-man project, it soon became clear that a bigger team is required to make it the game it deserves to be.

Today, Heart&Slash has been released out of Early Access.

In the last weeks we've worked hard to fix the final issues the game had. We have re-done the third level, added a lock-on option to all heads, balanced weapons, enemies and bosses...

After now, finally, Heart&Slash is ready to rock!

For the first week it will have a 10% discount, so take this chance to buy it.

We messed up. We listened. Heart&Slash gets camera fixes (and other fixes too)

Heart&Slash releases significant fixes to it's console and Early Access versions following constructive criticism on launch! Including the most requested...

Heart&Slash launched on PS4 and XboxOne

Today, Heart&Slash has been finally launched for consoles!

We finally have a release date. Heart&Slash will release June 24th on PS4 and XboxONE and early August 2016 for PC!

Heart&Slash First demo out. Try it!!!

It's been some time coming, but finally we have a new PUBLIC demo to show all progress we've done to the game since Early Access!

Demo for Heart&Slash, the 3D roguelike brawler, showcasing the first level and the tutorial.

Demo for Heart&Slash, the 3D roguelike brawler, showcasing the first level and the tutorial.

Demo for Heart&Slash, the 3D roguelike brawler, showcasing the tutorial and the first level.

Congrats on the Switch release

Interested in getting this on PS4 but waiting for a price drop.

I want to post your game in my blog. Is a latin blog of games. I can?

I can't access the level up menu for some reason, Is it not implemented yet or am I doing something wrong?

Hi. There were some problems related to frame rate issues. These builds are a little old now, but we plan on releasing new public builds in the next month. They will be limited to the first level and lack lots of content, but will serve as our demos and technichal benchmarks.

My Let´s Play :D Youtu.be This game is Amazing ^^

pls make it multiplayer it would be awsome!