Hangeki is an arcade style shooter game that emphasizes the strategic use of multiple spectacular weapons. Customize your ship’s weapons and take on the alien invasion.

Weapons play a major role in Hangeki, and using weapons efficiently requires the strategic management of the combo meter. In this brief article, I will cover a few key aspects of the combo meter as well as a few strategies to consider when trying to pull off weapon combos.

1) Not all meter levels are the same.

You probably noticed this while playing but may have not been able to put words to it. The combo meter in Hangeki has 3 levels ( 1, 2, and 3 ). Collecting coins charges the meter. Weapons use up a certain level of meter when fired. The trick here is that each level of combo meter is not the same as the level before it, that is, a level 2 meter is not equal to two level 1 meters.

So what does this mean? While you can quickly charge a Lv 1 meter using only the standard blaster, charging a Lv 2 won't be quite as easy. Not only that, if you ever stop hitting enemies, your meter will begin to decay, making it even harder to get to that elusive Lv 2 meter. And blastering to a Lv 3 meter? Forget it. That's like trying to charge 7 Lv 1 meters.

This brings up the question: how do I get to Lv 3 meter? Use weapons. It's really that simple. More specifically, use Lv 1 weapons to get your combo rolling. Weapons in Hangeki have a stat called "combo multiplier" that increases the number of coins enemies drop when destroyed by the weapon. This means destroying an enemy with a weapon will give you more coins than destroying an enemy with your blaster. 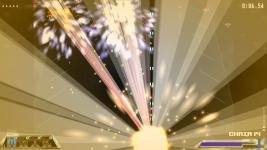 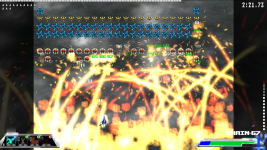 2) Weapon costs are based on meter level, not meter amount.

This is a far more subtle thing that not all players will notice. Each weapon has a level, and this level determines how many meters it uses to fire. The key thing to know is that weapon costs are constant. This probably doesn't make sense, so let's look at it with some examples.

> Using the Triple Seeker when you have Lv 1 meter uses one Lv 1 meter. No surprise here.

> Using the Triple Seeker when you have Lv 2 meter uses one Lv 2 meter. So after firing you have Lv 1 meter left. Makes sense right? Well...think about how the meter system works. Not all meters are the same right? When you fire your Triple Seeker with Lv 2 meter, you basically use 3.5 meters instead of 1. Sound like a rip off? It is. This is why you want to avoid using Lv 1 weapons when you have higher levels of meter. There is an exception though...

> Using the Triple Seeker when you have full Lv 3 meter uses one Lv 1 meter. Huh? Yep. When you are maxed out on meter, Lv 1 weapons will still use only a Lv 1 meter worth of meter.
These same rules apply to Lv 2 weapons as well. 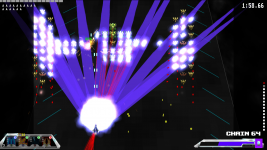 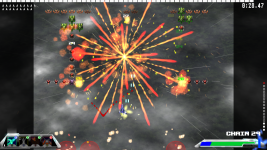 The basic take-away from all this is to use your weapons when you can. "Saving" weapons for later usually hurts you in the long run. Most weapons don't have that long of cooldowns, especially Lv 1 weapons. Use them when you can. Of course, you want to use them when they are actually going to be effective. Spamming Pulse Laser is probably going to use more meter than you will get back.

Hope you learned a little more about how Hangeki works and have begun to think of some new strategies to take to the battlefield.Good luck out there!

Check out upcoming updates to Hangeki! Click for more info

Update to Hangeki. Things get a little sharper with a more detailed player ship and sharper weapon icons. Read on to find out more.

I picked up this game when it was free but I have to say its certainly would be worth the cash.
I've paid for indie shmups with far less polish than this one sadly.

I wanna gripe about the d-pad implementation though. Works in the menus but not in the game.
The analog sticks on my 360 pad have deadzone issues so would love to turn those off.
Could always use a program like Glovepie or JoytoKey to reprogram digital only controls if I really want to though but still a minor annoyance.

The game's content is also pretty satisfactory though I'd love to see an expansion or "super" version in the future.
More levels, more challanges, more weapons, more background varations per level and some pre recorded higher quality music would be nice. Little more of everything.
Also maybe one of those fancy arcade intro cinematics for good measure?
Just some suggestions if an expansion can be done in the future.

Either way a new favorite indie shmup for me. Thanks for the free copy on release day btw.

Hey everyone, I ended up doing a Let's look at for this game. If you guys are curious about Hangeki but want more of an idea of what type of gameplay is it or how it progresses and flows you can check it out here Youtube.com
I still highly recommend that everyone downloads this game since its really well done and keeps the action going at a comfortable pace with beautiful graphics and entertaining music for each level.
~Destroyer Of Toast

This is a great free game! I haven't played a shooter in awhile, and this brings me back in!

When I start the game I just get a scrambled mess of graphics and can't see anything. The best I can describe it is back in the day when NES carts would get dirty. Anyone else have this problem?

Hmm... We've never had that problem before, what's your OS and graphics card? I'll add some options to disable custom resolutions (Gave us problems on an older computer running XP), and a few texture sampling effects. We're planning on putting up an update sometime this week, so hopefully you won't be stuck too long.

Alright, I've set up a support forum and made a post on this there, nothing new to say at the moment, but I've changed around a bunch of rendering things already which may help.
Indiedb.com

Yeah, I get the same problem! Here's a few screenshots I took. Imgur.com
Are you running Windows 8?

Yes, this is exactly how it looks for me too! I tried blowing into the cartridge but it didn't help :)