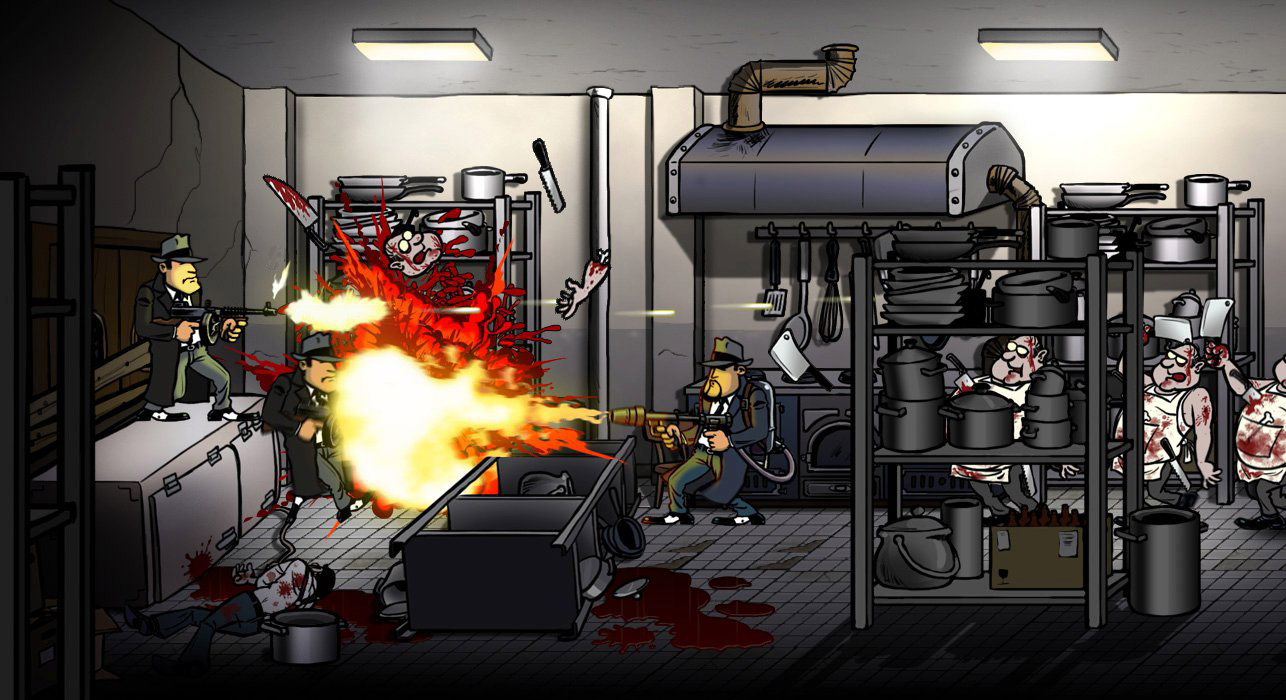 Action-Packed Gameplay: Prepare yourself for a non-stop, action-packed, over-the-top, platform game where you have to fight, shoot, blast and kick your way through a deeply engrossing story. Not only will you have to take on the undead, but also rivaling gangsters and government officials.

Epic Gangster Story: Beneath a city overrun by zombies, there's a dark story of conspiracy and betrayal. Unravel the sneaky mafia ways and government conspiracy while you try to look for your lost pal and answers about the zombie-outbreak.

Immersive World and Setting: Despite Prohibition and the imminent Depression, people are ready to drink themselves to (un)dead. Every inch of the game is like a picture straight from the Prohibition era. The cars, the furniture, the Speakeasy clubs, the music and the weaponry reflect the turbulent days of the roaring twenties.

After months of hard work we are happy to announce that we have hit the final stage of completion. Our team is polishing up the final details and making sure all zombies look great for the release. Be sure to check steam on the 30th of April and be the first to buy our greatest creation.

Not long after the release on Steam you can expect the game to be released on PS4, Xbox One and Wii U.

It's been a few months since our Steam Greenlight and the first demo. Find out what we've been doing!

Are you ready to experience our fast-paced action platformer for the first time?

Belgian game studio Crazy Monkey Studios and Claeysbrothers popped a bottle of champagne as their upcoming game was greenlit within 1 week by Steam!

pistol gangster with Paulie's suit like the beta version

(This is a joke mod, and this was not meant to attack the community of Wadanohara and the Great Blue Sea) In an alternate universe, Syakesan managed to...

I'm a gnome, and you've been GNOMED" like the Hero from Helltaker mod for the sequel, I have been planning to do this since both characters had similarities...

originally, Paulie was supposed to have the look from HBFW, but they decided to change the design because it can make the gameplay very hard since Vinnie...

Frankie as Sonny and mag reskin

"Welcome to the party" this mod like the Mixelmolly mod that I've made for Guns, Gore & Cannoli 2, it's a joke mod that i made for J3d1d1ah97

A very good 2D platformer that more than lived up to the promise of its demo. And speaking of the demo, why has it been removed? Seems strange that they would do that, definitely not a smart marketing decision.

I now own the full game and my Steam review can be found here:
Steamcommunity.com

Tags
Embed Buttons
Link to Guns Gore and Cannoli by selecting a button and using the embed code provided more...

The Adventures of Thong Girl Arcade