Groovy Invaders is a 2D Arcade Space shooter inspired by retro classics such as Galaga and Space Invaders. And is available on PC and Mac computers.

Aliens From Groovy Gamma IV are trying to take over Earth. They've captured all of the sheep and are threatening to eat them if the people of Earth don't surrender. You play as Funky Mike, a lone space pilot who will take on waves of alien invaders, eat space snacks and rescue the poor sheep!

Game comes with 10 Levels, a hard difficulty, 5 ships to pilot and plenty of other extras to unlock!

Groovy Invaders is now remade in the Unity game engine. and Now has
smoother control scheme, full screen and a story to go with the game!

I plan to keep on updating Groovy Invaders, and getting rid of any bugs I hear about. Any reviews or messages about the game would go a long way to helping improve upon it. And would be greatly appreciated.

And check it the official youtube channel for Groovy Invaders
Youtube.com

Hey, it's been a while since my last update. I'm currently working on making mobile games. Starting off with a much needed update for Fart Man. It'll have new updates to the gameplay to make it easier, along with updates to the gift shop with new content to buy. With hopefully new content being added regularly.

New enemies will be added to, such as blimps and the insta-kill grim reapers:

Fart Man will be out on android, as well as iOS very soon.

This is the official page for our game, Chronosaur! We will be posting info on our project/game here, as well as other places. stay tuned for more updates...

We plan to be making new games monthly, we made Groovy Invaders Demo for android in January, Killer Kubes in February. And we've got a new game planned...

the demo to Groovy Invaders, version 2.0, is out now. With several updates and added features to the gameplay.

Fight off the evil Killer Kubes in the first 3D game by Groovy Video Games. Use the left buttons to move, and the right buttons to turn and jump, and...

The new Demo for Groovy Invaders, with new mechanics, updates and features to the gameplay. Such as Turbo Fire and Level Variation! This is the Windows...

A new demo for Groovy Invaders with updated gameplay and several new features. Such as Turbo Fire and Level Variations!

In this latest update, we've not only added an additional level to the game. But we've also tweaked the first and second playable ships. making them more...

In this latest update, we've not only added an additional level to the game. But we've also tweaked the first and second playable ships. making them more...

This will be the fifth update made to Groovy Invaders. This version has more bugs with the Ack Man fixed. And also there are two secret levels in the...

Thanks man, I appreciate it.

I had way to much fun with this game :D Youtube.com

Thanks dude! It's awesome to see other people enjoy this game :) 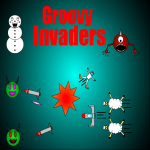 Vampires: Guide Them to Safety! Arcade

Think of the Children Arcade