WREAK HAVOC
As you race on 36 tracks in fully destructible environments.

SUPE IT UP!
Choose among 16 different upgradeable cars that take realistic damage, affecting their appearance and drivability.

TAKE ON YOUR RIVALS!
Race online with up to 8 players

Bugbear working on new derby\racing game, want to be a alpha tester?

Bugbear ( from Flatout 1 and 2 fame ) going to self-publish their next new game. Bugbear been taking in input since February and now has announce a pre-order for the " Next Car Game ". If you do the pre-order, you will get to test out alpha version when it ready and a pre-alpha when there 10,000 pre-orders.

If your a Flatout fan, you are going to want to checkout what Bugbear up to this time around: 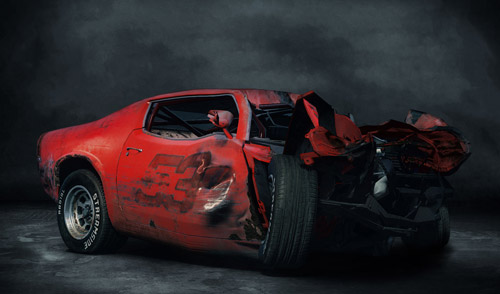 First and foremost, we’re building a FUN racing game with PERSONALITY. It’s all about the stuff that really matters: varied tracks, cool cars, and the defining once-in-the-lifetime moments that can be achieved only with true-to-life physics simulation.

If you’re familiar with the original FlatOut experience, you already know what we’re aiming at: exhilarating racing action with sophisticated physics and damage modeling, only this time we’re upping the ante on almost every front. This is the game we envisioned way back in the early 2000s, only re-imagined for today’s technology and gaming standards.

Oh, and we’ve got full-blown, straight-up demolition derbies, too, to go with your full contact racing.

The cars are old, cheap, banged up, patched together, rusty… just awesome! In short, our cars ooze with STYLE! You won’t find anything like them in other racing games.

We’ve got variety: everyone loves the old American heavy-hitters from the muscle car era, but we’re not neglecting the fun little European and Asian cars from the long-gone decades either. The best part is that you’ll be taking them apart and building them back up again in your garage. Need more horsepower on a budget? No problem, scour the classifieds for a bargain supercharger – just remember that a cheap bargain find might not withstand too much punishment!

The career is as much about your garage and your project cars as it is about racing.

Our in-house ROMU engine is a beast. A hell-bent beast that’s precision-engineered for high-speed, breakneck racing. You could not create this experience with just any engine. The ROMU engine is all about heavy metal going way too fast and crashing into stuff.

At Bugbear we’re all about putting you in the driver’s seat. That’s why our engine is simulating everything, to give you great feedback on what your car is doing. You’ll feel the little bumps on the track, the weight of your car when you go over them – and most certainly you’ll feel it when you’re being dealt some damage, only that getting HURT has never before felt so good!

We can’t wait to show you what we can do with today’s hardware. Now we have fully dynamic visual car damage (no predefined damage models!), and the environments are more destructible than ever before.

Essentially, we can now put a ton of flying metal and dirt in the air at any given time, and we certainly will!

It’s a motorsport with attitude.

And those of you that are interested in modding, here some good news from Bugbear:


Joonas wrote: We are well aware of the modding popularity of our earlier games and fully intend to replicate that with NCG. How it's going to work, exactly, is still being discussed.

Will the new Flatout that Team6 is making for the Wii, come to the PC? Maybe, but we need your help to make it happen. Edit: We did it, Team6 got the...

This is mod for Flatout, that add some cars from bugbear retro game, 1 car from flatoutjoint community. And i try restore car(number 17 on original game...

The Steam version of FlatOut is the v1.0 version. This is the v1.1 patch for FlatOut that works with the Steam release.

You can now download a prototype that we created over 10 years ago that has never been shown publicly.

You needing some custom cars for the FOv3 Community mod for Flatout 1, here ya go. Heddly put together a carpack of 17 custom cars and the Figure 8 and...

If you got a problem installing the FOV3 Mod, the following download will help most if not all the problems experienced when installing the mod. Please...