Bugbear Retro Flatout Demo from 2002 has been release!

Hey Flatout fans, Bugbear been working on their new derby/racing game, working title "Next Car Game", for now. Bugbear is self-publishing this time around, since publishers don't think there a market for a "Flatout" style, no rules racing game, Bugbear wants to prove them wrong and make a game Bugbear and Flatout fanatics can be proud of!

To that end, Bugbear started a Kickstarter page November 1:

Next Car Game: A Motorsport With Attitude!

Thursday, Nov 7, Bugbear posted an update at the Kickstarter page and shocked the Flatout community:

"Hey, everyone!
Since we’re currently running a Kickstarter campaign for our Next Car
Game, we thought it would be a great time to share something very
special with you.

You can now download a prototype that we created over 10 years ago that has never been shown publicly. The prototype is a little rough around the edges, but it served as an initial actualization of our vision for a reckless racing game, and despite the humble beginnings, it later grew into a game franchise loved by millions of fans."

Here pic of the Beetle of Flatout lore that been talk about in many a Flatout forum over the years: 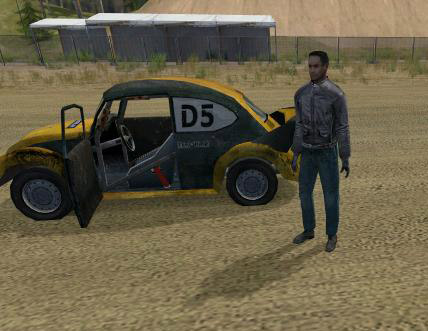 Also Bugbear looking to be friendly to modders this go around according to Bugbear Dev, Joonas Laakso:

"We have decided to support modding as we recognize it’s a large part of why FlatOut is still known and played today. How exactly that’s going to work we don’t know yet, but the goal is to have user-created tracks and cars available, though Steam Workshop or otherwise. We’re likely not going to ship actual editors, but rather tools you can use to export models into
the game."

And if you got the modding itch right now, go to Bugbear Kickstarter page and
download Bugbear Retro Demo 2002, now for free. The Retro Demo is unpack.
Have some fun tweaking the game files in the \data folder. :)

EDIT: Demo link don't work any more, so use this one:

So I did some testing, retro demo run under Win7 and Win10 with my tweaked game.ini file. So I packed up the whole demo this time with 7-zip and uploaded it to my mediafire: Mediafire.com

the game will be released even if the Kickstarter campaign is not
succesful. It's just that a successful campaign would enlarge our player
base and give us means to make the game even better and larger in
scope.

Bugbear working on new derby\racing game, want to be a alpha tester?

Bugbear working on new derby\racing game, working title " Next Car Game ". Bugbear ( from Flatout 1 and 2 fame ) going to self-publish their next new...

These are the files that you need. Detailed instructions on how to install them can be found in the READ ME file.