Ealdorlight is a single player RPG set in a medieval kingdom where magic is rare and mysterious. You discover at the beginning of the game that you were found lost as a small child, and the identity of your real family is unknown.

Soon after, you meet the Ealdorlight, a legendary supernatural being not seen for centuries, who tells of darkness in the kingdom and invites you to take the King's place.

You must leave your adopted home and travel the land, gaining connections, title and influence in order to discover your real family, and to win the throne: through honour, intrigue, or force.

The game has turn-based combat with a realistic damage system that models bones, muscles and organs. It also procedurally generates an new kingdom history, society and people every game. Each time you play you'll meet different characters with different backstories.

You start by travelling between villages and towns on the edge of a randomised kingdom map.

You might craft simple items and farm crops, selling them at the market, all the time asking for information about your family from tinkers and travellers passing through.

You can take on quests from the townsfolk, and be rewarded with reputation, gold, and ancient items. Alternatively, you can steal money or items from them.

Work for someone with the right contacts, and you might also gain introductions to more powerful characters.

Impress the right people, and be granted lands and titles as you get ever closer to the King.

You can recruit characters with different skills, abilities and contacts to aid you in your struggle.

Along the way you may discover who you are and where you came from, and why you cannot remember your past.

In the end-game, you’ll earn access to the court of the current King, and work out how to take his place.

You might win over the ruling nobles through tales of your great deeds and your strength of character.

You might cause a scandal which causes the court to lose faith in the the King - he might have one or two skeletons in the closet which you could discover and expose.

If he refuses to step down, you can hatch a plot to arrange the King's untimely death, with you lined up to take his place.

If all else fails, you can storm the castle and take the throne through force in a bloody military coup.

You might use a combination of these methods to take the throne: but how do you stay true to your character in the process? 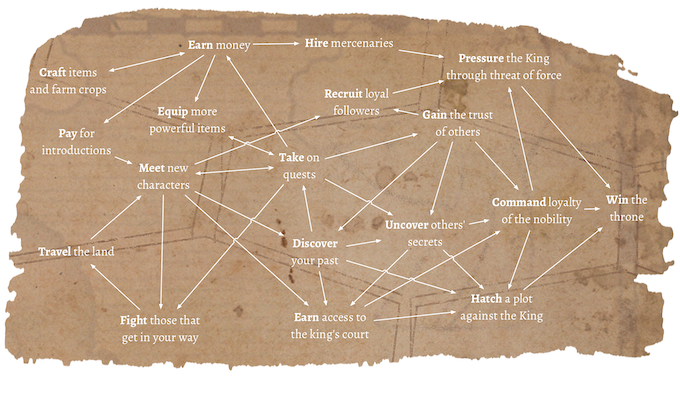 Some of the proposed core gameplay loops

Ealdorlight's Kickstarter has been launched!

Check out the Kickstarter campaign here!

Over the last year, I’ve been keeping busy doing two things. One is to support my first game Sol Trader as much as I can with countless updates and patches. I’ve also been very busy working on a new game, Ealdorlight, a medieval RPG-style take on Sol Trader’s mechanics, with turn-based combat, realistic damage and great graphics. I announced Ealdorlight in March and demonstrated it at Rezzed, strengthening my hope that the idea was a good one.

I decided fairly early on that I wanted to take Ealdorlight to Kickstarter. Sol Trader’s successful Kickstarter was a brilliant experience. The Kickstarter community is one of the kindest, most positive on the Internet. I also needed funding for this game: Sol Trader was self-funded through many long evenings and contracting work, and for Ealdorlight I need a bigger team to realise the vision. It’s built in Unreal Engine 4, which simultaneously saves me loads of development time and means I need a bigger team to pull off the realistic art style I’ve gone for.

I'd love to know what you think of the game! Please do spread the word, and let's hit some of those social goals!