DuoVoxel is the “social shmup” for the Facebook generation. This 2-player arcade shoot-em-up is played in turns, with your buddy, on Facebook!

In DuoVoxel, you build and shape a world with your friend, voxel by voxel. Every enemy you blow away reveals part of an ever-changing landscape. As you progress together, the world changes and reflect your choices, spawning new challenges and backdrops. Duos that you form on Facebook are unique, persistent narratives, so each friend you tag along brings something new to the experience!

You target enemies, disable them and loot their blocky colored remains. By skillfully alternating between Attack Mode and Steal Mode, you get more powerful and can survive longer!

DuoVoxel revolves around cooperation and reciprocation with your buddy. Every time you gain a power up, your friend gets one too! The more you give away, the better your duo survives! When you bite the dust, your friend takes over. One shared timeline means you can see each other in-game and you won't miss a thing. Play together, but at your own pace.

Welcome to DuoVoxel. Grab a friend, give a little, shoot a whole lot.

Thanks for voting and helping DuoVoxel on it's quest to become the 2022 Indie of the Year. You are now in with a chance to score some free games. Help this game secure more votes by embedding the widget (or link) we have included below on your favorite sites.

DuoVoxel gameplay footage is up!


Ok and now for some explanations. Lots of things look a bit ugly and that's to be expected. You're looking at the equivalent of "programmer art" applied to game footage!

The first clip shows the presence of the buddy's "ghost". You fight the same fight with your friend even though you play turn-based. So you will see all his moves until he bites the dust. This is crucial so you can coordinate attacks with him on the enemy.

The second thing I shouldn't need to point out, but will anyways since I'm the one writing, are the voxel graphics. They're still quite a bit rough around the corners, but that's normal because they're cubes! EVERYTHING in the game is composed of voxels, and can be taken apart as voxels.

And what does that do exactly? Taking enemies apart voxel-by-voxel ? Well, it gives you mojo. Power. Fame. Money. It changes your shape. It makes you more attractive to the opposite sex. It gives you new weapons. It gives you new colors. It basically reflects how good you are. So you want to stock up on colors. A fact I illustrate pretty easily by making the player start out as greyscaled.

There are two clips in there that show a slightly different setup in which you align colored voxels and grab them. That's the part about stealing voxels from the enemy and growing stronger. So you basically alternate between these two modes of play while your buddy does the same on his end.

So to sum up quickly:
- you can see the ghost of your buddy doing stuff
- you can shoot enemies and disable them
- you can steal voxels from them when they are disabled, and then return more powerful (and colored). 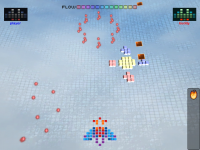 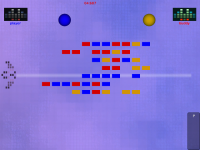 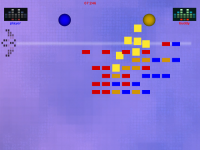 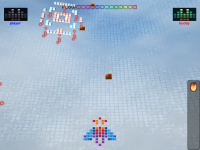 That's it for now, gotta go. Questions ? By all means, fire them below!

Hello everyone! First post! Don't mind the mess, still getting used to IndieDB's interface. Here's a little something about DuoVoxel's logo.

Looks weird, but in a really nice way! Definitely tracking.