The Matrix Unplugged is the only Matrix-themed, text-based MMORPG of its kind in existence. You control a redpill as they awaken from the Matrix, fight agents and exiles, run complex training programs and, ultimately, walk the path of the one. While the game has been released, it is still in an early-alpha stage and is undergoing active development. Click here to sign up today!

We are working on supporting:

I've been working on the game like crazy over the past week or so. I've implemented a number of cool and relatively major features, and made loads of smaller, more subtle changes to the game as a whole.
Also, not that it's anything to do with the game's development - we now have over 100 player signups, which is pretty cool considering the fact that we're still in Alpha.
Anyway, here're a few things which I've added recently:

Firstly, I almost completely rewrote the Code Segment system. Code Segments are designed to be the main in-game currency (aside from actual money), and therefore in the newly re-implemented system, I've made it as easy as possible to acquire them, use them and sell them on. I'm still examining what the effects on the game's economy have been because of this, but here's the new Source system, where you can use your Code Segments for various in-game rewards: 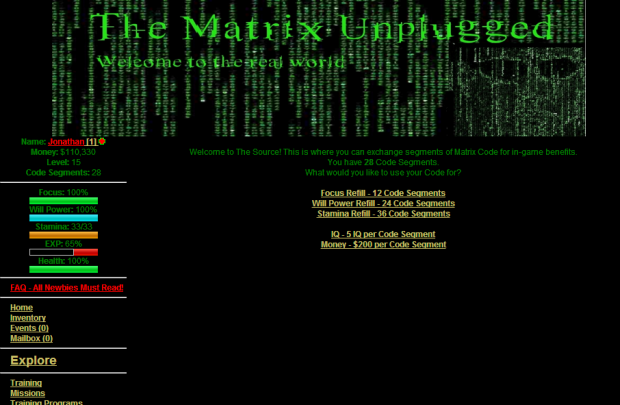 The Source is a new mod which allows players to use Code Segments to refill their core stats, earn money and gain IQ points.

I also made it possible for users to buy and sell Code Segments from each other in a public market situation, known as The Chateau. The system is still a little unoptimized and in early testing stages, but here's what it looks like at the moment: 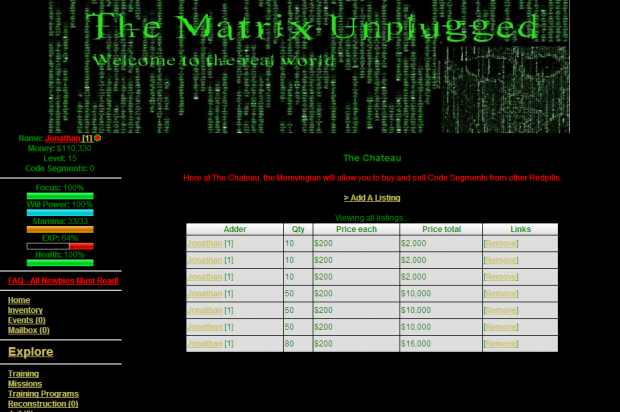 In The Chateau system, users can view Code Segment sale listings posted by other users, purchase Code Segments, add their own listings and choose their own prices. I think it leads to a much more organic game economy than rigidly coding the buying/selling prices.

The largest single feature I've added so far (being over 1,100 lines of code just in itself, it's by far the largest gameplay mod currently in the game) is the Hovercraft Crew system. It's the Matrix Unplugged equivalent of a clan/gang system in most other MMOs of this type. Basically, if you own a Hovercraft, you can found a Hovercraft Crew for a small fee. You're then made Captain, and you can recruit more members to your crew (and give them other positions such as Operator or Driver), donate money in order to increase the size, capacity and power of your crew, declare war on other crews, earn respect for your crew, chat with other crew members, etc.
Not very much of this is actually in the game yet, since around 80% of this system is still being tested by us admins, but here's what the selection interface looks like thus far (don't worry, there are way more crews in the game at the moment - this snapshot was taken about 2 minutes after I put the feature live on the site :P ): 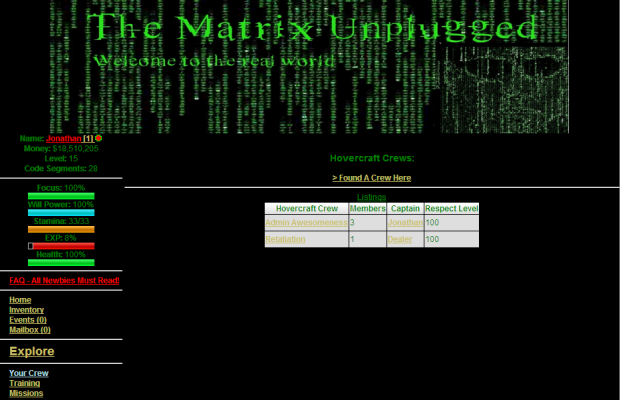 Our sad Crew listings page :P This is just a small fraction of what this large mod encompasses.

Finally, a feature which I essentially just added in for fun, but also because I'd had a couple of requests from players who wanted it, was a Hall of Fame system, where you can view the top 20 players in relation to various criteria, including Level, Money, Stats, Crew Respect etc., in order to get a better general view of how well you're doing in the game in relation to other members. Here's what the system looks like at present: 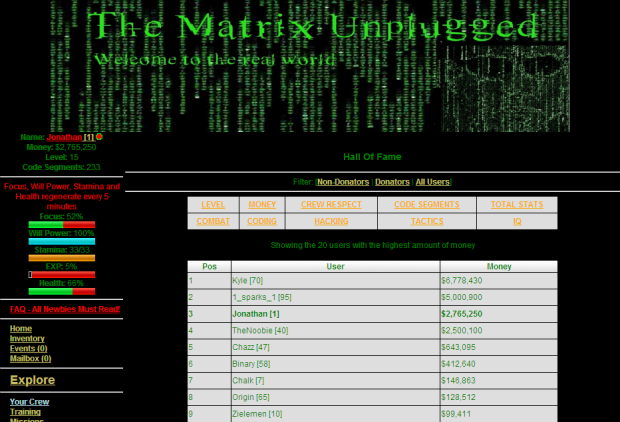 I'm not a great fan of this colour scheme, though, so I'm probably going to be changing that at some point. Still, the core functionality is there, and it didn't actually take too long to implement in the end.

Something else (which you may well have noticed) is the dramatically updated design and user interface, in comparison to the last screenshots which we released.
With all this added functionality and a pretty decent playerbase, I feel that with just a few more additions and minor updates, the Matrix Unplugged could well be ready for a public beta version very shortly!

If you're interested in playing our current alpha version, you can find us at Matrixunplugged.co.uk !

Over the past week or so, I've implemented quite a few new features into The Matrix Unplugged, and just today, I transferred the game over to a .co.uk...

The Matrix Unplugged officially went live yesterday. Here are a few code changes I've made since then.

Tags
Embed Buttons
Link to The Matrix Unplugged by selecting a button and using the embed code provided more...