Way of the Pigeon | TBD

Thought I'd use this post to describle the platform and progress for how I'm currently creating character animation sprites in Poser 10 (Points to newer version, one of our Patreon milestones guys!) for DodgeOrb; the orb dodging arena arcade physics-based awesomeness in development at The Pigeon. 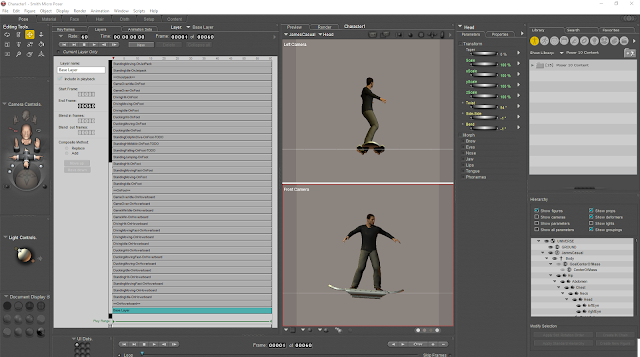 I intend the final release of DodgeOrb to have 3 stances (or modes of transport); Hoverboard (which aside from polish / cleanup is mostly done), on foot and jetpack!

This will (in theory) allow for a variety of gameplay arcs and challenge in the many various different arena's, with the player having to balance gravity and movement in different ways depending on the choice (if given) or method of movement in play.

Animation is recorded in Poser at 60 frames per second (its the standard I guess and looks pretty smooth in Unity and on my tested android devices) at a dimension of 128x128. This results in one animation occupying about 1.2mb-2mb in disk space.

There 4 stances for each transport type; standing, ducking (crouched), diving (proned) and othere / special including things like Game Over, Win etc (these may end up not being used or used as much, we'll see). In total each animation set will occupy around 20-25mb. I have to take all this into consideration for any potential mobile / web versions (although less of an issue for high-end gaming target / modern tech). It takes quite a while for Unity to run a test run first-time around likely due to all the animation it has to sort and spritesheet but it does a great job on mobile with the apk size running at less than 25mb. I think with everyhing completed it should be at worst around 100-200mb for on mobile not including background assets etc which is livable at the moment.

Many of the on foot animation is complete but much of the jetpack animation is yet to be done. I'm considering releasing a hoverboard-only version to start with (DodgeOrb Prototype for example) just to have something released sooner and get a feel for how you guys find it and what changes / improvements may need to be made and mainly if the project is something people are excited about playing.

Overall, the animation process in Poser is the easiest at all times but it is the easiest option I have with the ratio of sexy results. I'm hoping that if we can reach our Patreon milestone I'll be able to upgrade to the latest Poser which I hope makes the process even more easy, sexy less quirky.

Thanks for reading and more progress / development stuff to come! Don't forget to share, like, hate, discuss as well as join the coop!

Way of the Pigeon