Claustrophobia: The Downward Struggle is an indie RPG roguelike, with a retro graphic style and a terrible sense of humour. The game takes place in a series of ever descending randomly generated dungeon floors, packed full of monsters to slaughter and loot to pillage. The game plays like a traditional roguelike, but with a clean UI, a slick, action orientated combat system, and a massive range of enemy types, skills, gear and room designs. With features like crafting, skill trees, characters development, and just-one-more-room style gameplay, Claustrophobia is a love letter to traditional RPG rougelikes. Create your ideal hero, build your own custom class, then set out on your quest for glory, slaughter, and anything shiny!

Featuring a talk about the new statistic system, how they will effect classes, and pretty tooltips.

Hello to you all! Welcome to Development Log #2 (version 2, since I kind of accidentally deleted the finished post, and had to write it again... :( ). Over the last week I've been working on a number of things, from making unit movement as smooth and responsive as possible, to designing hair styles and armour. As you may have noticed by now, I tend to hop about between various different things during development. While I have been working on being slightly more organised, I tend to find swapping about keeps me refreshed, and I always seem to have ideas on how to improve things that I'm not currently working on.

Anyway. Today I'm going to be talking about statistics, the changes I'm going to be making this time around, and how they effect gameplay. One of the major issues I always found with the first iteration of Claustrophobia was that the three main stats (Strength, Agility, and Intelligence) never really had much effect on your character. Also, by their very nature, players were forced to build the single stat that corresponded with their class, to the point where there was just no variation in the gear that you chose to wear. The only thing that effected that choice was which piece had the higher number.

Of course, in a game primarily designed around glorious loot, I feel like that system could have been designed much better. So, this time around, I'll be doing things a little differently. For a start, the three main stats have been split into five, and the player will recieve a number of points each level to place into these five areas. The five main stats in turn will effect minor stats, such as hit chance, critical strike chance, and spell power. These minor stats will also be effected directly by pieces of gear, which will also feature hit chances, such as chance to knockback, chance to burn, or cooler things like chance to summon a demon or an increase in sight range.

These changes will mean that classes will have both multiple stats to build into, and individual gear pieces will actually effect your play style. Hybrid classes will also be possible, with stats split three or more ways. The five major stats will effect minor stats as followed:

This is subject to change, and anybody who has opinions on stats that could be switched about, I will be pleased to hear from you. The idea behind this design was that each class would be encouraged to split their points into at least two stats, and that those stats could be shared so that they don't only benefit one class. For example, if you are a melee fighter who simply requires more mana, you could build Wisdom without wasting points on Intelligence.

I haven't quite yet decided on how exactly classes will work this time around. I love the idea of allowing the player to create their own skill set as they go along, but I think that having some sort of starting point in any RPG is useful. I'm toying with the idea of having something akin to a job system, where you start as a base class and then specialise further into the game. Or something similar to the old system, but instead of allowing every class to be built at once, maybe splitting them into parts and then allowing the player to choose a number of those parts to build a skill tree. If you have any preferences, leave them in the comments below.

Right, with all that done (twice now, I've learnt an important lesson about saving things), I think it's time for a coffee. I leave you with an ingame shot of the new tooltip system, which I personally think is quite pretty, as far as tooltips go. 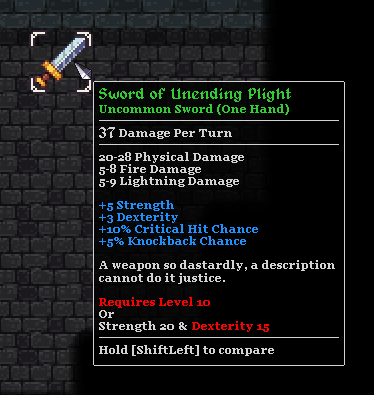 The item database hasn't actually been written yet, so the content of the tooltip is purely placeholder, but the layout and design is pretty much finished. Damage Per Turn is an average from the combination of damage types shown below, while the blue stats are changes to both minor and major stats. Gear will also require either a level or a certain amount of base stats.

Keep it up man. I love what you have done with the game so far. I invested shortly after you started the game and have found what you have been doing to be very Kick ***. Keep it up

Sounds awesome! Can you make the compare button re-bind-able? My left shift is broken... again.

I really like where you're going with the game now. Character and loot stats were way too simple, especially loot where you'd only have around 1-2 damage increase on a better weapon each time, or a 1-2 armor increase on body slots. The new stats system for loot seems pretty awesome and will definitely make us think harder about which weapon/body gear to use.

I also can't wait to see more screenshots of the game. I know I complained last time saying that you shouldn't change graphics because they looked great but damn.. after seing this little screenshot I already changed my mind. New graphics look amazing and I'm really wondering how will characters and monsters look.

As for class system that's pretty hard decision. I personally like the way it works in DoD. You select all the skillsets you want at the start and then once in game you build your character as you see fit. If you're having problems with enemies you can focus on defensive skillsets you picked, if not you can focus on offensive ones and you also level the supportive ones in between. That gives you a huge choice of builds and even when you pick the exactly same skillsets you can still go around and build it differently every time by focusing on different skillsets first.

This is looking good. I thought the original game was a very enjoyable time-waster; this could be even worse!

Can you make it playable only by keys like it is for example in Hack, Slash, Loot? Also more diverse crafting and alchemy and ability to Dip things in potions like in Powder especially arrows and swords and a pet please :) Good Luck!

i hope something will be done about the RNG hitting system, like HackSlashLoot its very luck bases when it always misses so many times you always die at one point, also there is no difference between having permadeath ticked or not