Introducing the remaining cards and the combo system!

I know you've been waiting for a while - here are the last two cards of Cardheart!

The fastest ability in the game, but also the hardest to master. By holding down the attack button on the ground, you can charge up your speed, and by pressing the attack button right after an attack you can keep your previous charge. Critical Dive will deal great damage to any enemy it hits, but if it misses it'll automatically convert into a Charge Dash.

And now the slowest ability in the game, but each attack packs a big punch (literally)! Ancient Impact is a powerful combo finisher, while Palm Claw is a nice combo starter because of its launching properties. Watch out about throwing these out recklessly, though - they are pretty sluggish.

Some changes were also made to the other two cards:

Fireballs will now start slow and speed up as they travel further. You can also aim them upwards for combo extensions.

The grounded water attack was changed to be more offensive, seeing as how Thunder fills the movement niche quite well. It's now a great enemy-trapping tool, useful for bigger groups.

Here's an example of a combo using them all together:

Of course, you won't be able to just juggle the enemy using one attack - a combo break system is in place that favors variety of card use, so you'll have to get creative. 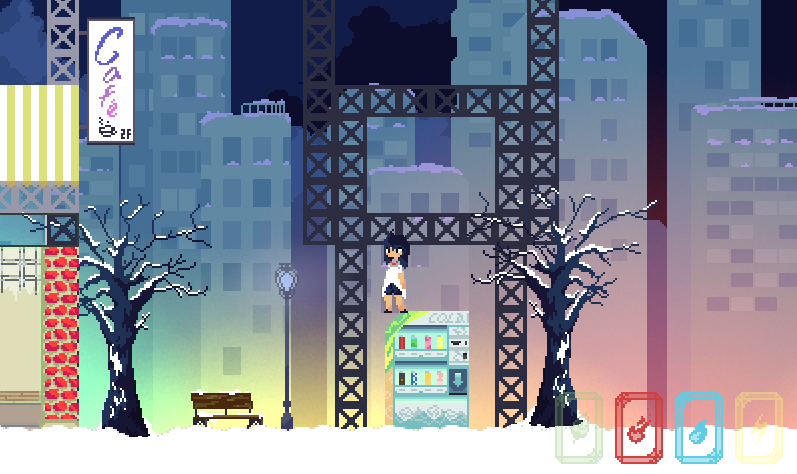 An introduction - Attacks, enemies, and NPCs!

This looks lovely so far! I love the art style and the smooth animation. (Small suggestion: maybe make the text boxes slightly transparent? I don't know about anyone else but it bothers me how so much of the screen, including parts of the characters, completely disappears. Just an idea!)
The elemental cards and their combination sounds interesting as well, I'm curious how that'll work. Will the player be able to combine only 2 at a time, or maybe even all of them?
Keep up the good work! :)

Thanks! Yea, I agree with you on the transparency - the textboxes are definitely temporary.
You'll only be able to combine 2 at once, though how that works is yet to be revealed.