A light hearted 2d platforming adventure game. Janice's quest to get a decent cup of tea continues, as she unravels the mysteries that lie Beyond Teatime. Beyond Teatime will feature mechanics inspired by classic platformers, and elements of exploration and character improvement inspired by games like Zelda and Metroid. Beyond Teatime is active development, and will eventually be available for PC, Linux, Mac and hopefully Android.

Since the last update I've added a whole bunch more improvements to Beyond Teatime. It's finally starting to come together as a game, and it's a great feeling.

First up, was the switchover to tilemaps for the base of all the levels. Construct 2 added support for tile maps somewhat recently, which made the choice to add them to Beyond Teatime possible. Previously, the game was using a combination of single sprites and tiling background textures to make up the levels. This worked, but it was messy, and in order to make the levels look decent you, end up with a mess of objects in the Construct layout view. 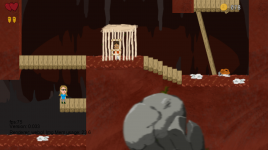 Not the best approach.

Tilemaps however, take a bit more work up front during their creation, but make it much quicker to put levels together. The new tile maps have been turning out pretty well and should speed up implementing levels in the future. 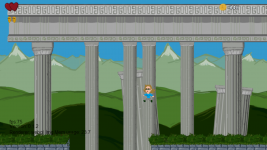 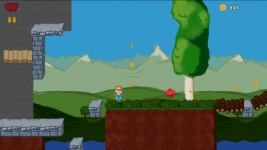 Examples of areas with the new tilemaps.

Next up, powerups. I've made some tweaks to the planned upgrades that you will find as you explore the world in Beyond Teatime. For the wall jump upgrade, you will now be able to cling to the wall to slow your descent before jumping. This makes it easier to wall-jump precisely and effectively.
We also have a skill that lets you smash upwards, damaging enemies and clearing rubble. To gain this ability, you need to find yourself a nice cup of Might Tea. It also serves as type of double-jump, and when you combine it with wall-jumping, it gives many more options for navigating the levels. 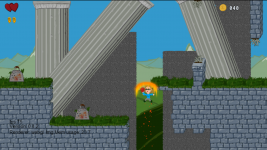 A peek at an early version of the upwards smash.

A couple stylish new effects have been added, in order to display the majesty of the Celestial Teapot, and to show of the mysterious portal. Things like this are always fun to create, and they always seem to turn out better than expected. Also completed, but not pictured, a whole bunch more particle effects that add little touches to the levels. 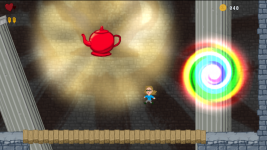 The last improvement that I'll mention is the new indicator for off-screen hazards. One complaint I received for my first game Tea Quest was that being killed by off-screen dangers felt unfair. Which was very true, it's much more fun to have a chance to move before being destroyed. So I set out to add warning indicators for hazards in Beyond Teatime.
An indicator will pop-up when the hazard is close to the screen, to give you a chance to get out of the way. It increases in size as it approaches, so you have some idea that something is coming for you. 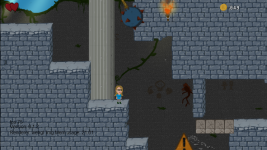 Not the clearest picture, but that little warning on the bottom indicates that
something is going to be entering the screen and attempting to ruin your day.

That's it for this update. Thanks for reading. And if anyone out there would be interested in taking part in some alpha tests send me a message. Beyond Teatime should hopefully be ready for some form of broader testing soon.

November 11 2013 Development update for Beyond Teatime. New boss has been added, along with the systems need for that to work. A couple of video previews...

A quick look at the new menu and savegame system in Beyond Teatime. And an update on the status of development.

Beyond Teatime Platformer
Twitter
Tags
Embed Buttons
Link to Beyond Teatime by selecting a button and using the embed code provided more...