Another Castle combines classic platforming gameplay with the randomness of a rouguelike. You play as Andy, a kid who's looking for a random item, whether it be a kick ass magical sword, a wizard hat, or royalty. To find the item you must run, jump, and fight your way through a randomly generated castle. When you beat the game, you sadly won't get the item, as it's always in another castle. Instead, the item is now unlocked and can be found in future playthroughs of the game.

You can play the current prototype at AnotherCastleTheGame.com

Thanks for voting and helping Another Castle on it's quest to become the 2022 Indie of the Year. You are now in with a chance to score some free games. Help this game secure more votes by embedding the widget (or link) we have included below on your favorite sites.

Prince of Persia 2: The Shadow and the Flame
Post article RSS Articles

The alpha for Another Castle is out now!

Version 0.3 is out now, and is also the first publicly available version of the alpha. You can buy it, as well as try out a free web version at AnotherCastleTheGame.com

I’m excited about this release because I now have the basic skeleton of the game in place, and with future updates I can focus primarily on making the game fun, adding crazy stuff, and just generally fleshing out the game. From this point on I should also be able to make more frequent updates, ideally every 2 - 4 weeks as opposed to every few months.

Since this is a random game, I’ve decided it would be fun to have a few different composers contribute tracks to create a more varied sound throughout the game.

I’m excited to announce that the first composer for the soundtrack is Magnus “Souleye” Pålsson. Magnus made the music for VVVVVV, which is quite honestly my favorite video game soundtrack of all time, so I’m really happy to have him on board. He’s created four tracks for the game which are all in version 0.3, and I especially love the funky titular track “Another Castle”.

This update adds a basic overworld to the game. Right now the overworld is the same every time you play, but in the future I’ll be making it random. You can walk around levels in the overworld which probably doesn’t make a lot of sense right now, but in future updates I’ll be adding random encounters and other things to encourage you not to skip levels. I want going off the path to become a high risk / high reward, as well as quite surreal, strategy.

0.3 also adds castle levels to the game. With the Castle levels I now have all three basic level types added to the game, Outside, Cave, and Castle. While Outside and Cave levels can be found anywhere in the overworld, Castle levels are only found right now at the last two levels of the game. 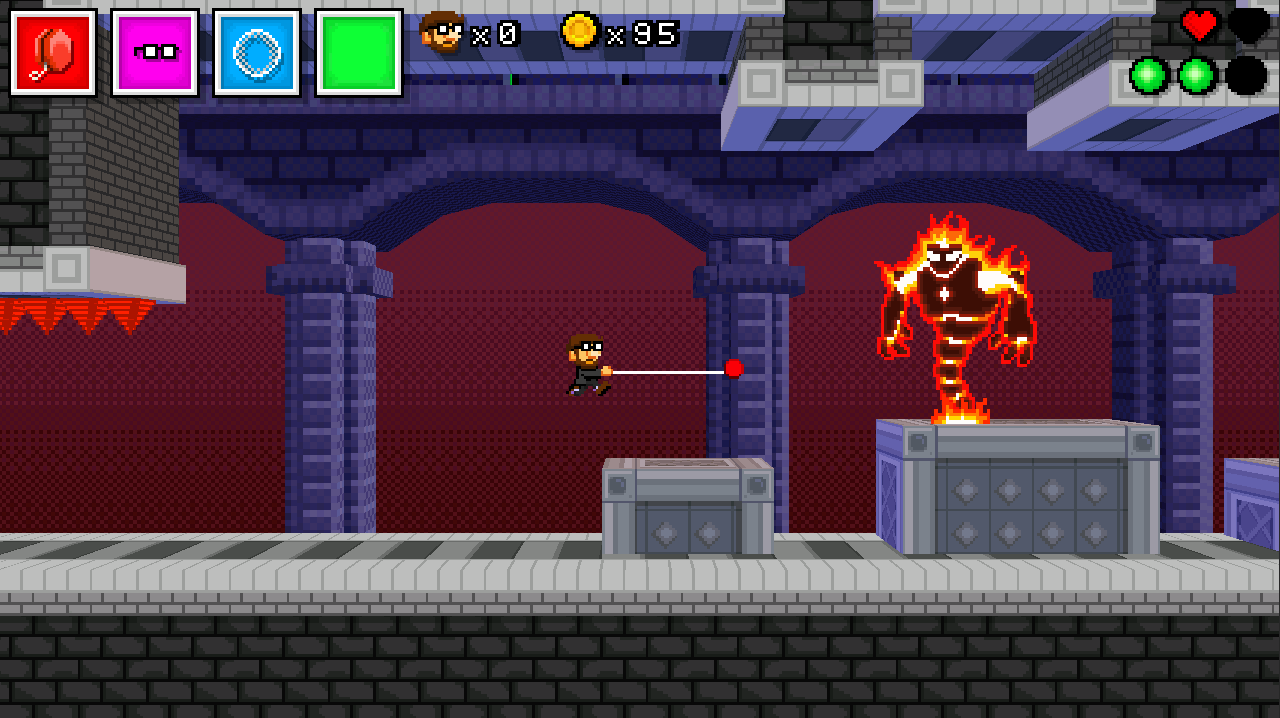 We take an early look at Another Castle, a Kickstarter funded platformer with randomly generated levels and a great sense of humor!

Another Castle is now on Steam Greenlight!

Another Castle is now on Steam Greenlight! I love Steam, and I think it would be great if Another Castle could get on the platform.

Another Castle is coming to the Wii U, Kickstarter launched!

Another Castle is coming to the Wii U, in addition to Windows, Mac, Linux, iOS, Android & OUYA! I also just launched a Kickstarter for the game.

This version adds a jetpack, flamethrower, spinning platforms, bouncy mushrooms, lava, and a fire golem to the game.

This version adds a jetpack, flamethrower, spinning platforms, bouncy mushrooms, lava, and a fire golem to the game.

It works very good for me but I feel like the jump height needs to be bigger, it's hard to make big jumps and reach higher platforms. But overall, very good game! I like the pixel art!

Thanks! I think I'm going to try and make the jumping a bit more forgiving in the next update.

The jumps are just right! No need for that.
+ If you get your hands on a jetpack you are suited to go everywhere.

8.also will there be a minj map or map

also will thwre be bosses?

Also will there be ltos of bosses?

1.Are oytu thinkign of adding side quests to the game?

2.How many enviroemtns are you going to have in the final release?

3.Is there going to be a hige number of iteams and enyes to ciollect and battle agaist?

4.How will the overworld work?

Your voice is awsome

it's hard to answer your questions, as the scale of the game will largely depend on how successful the Kickstarter I'm going to run relatively soon is. I'll give it a shot:

1 - There will definitely be mini games, as well as secret paths in the game.

2 - No idea at this point, minimum 5 different climates

5 - a level map is a definite possibility, not sure yet

6 - there will be bosses, not sure how many yet

Played your game, I enjoyed it very much :) here is the link, it might still be uploading, but it will be up eventually!

Just to let you know, the end text is just a placeholder for the prototype. You won't be able to unlock items by beating the game until I've implemented the overworld :)

Indie
Tags
Embed Buttons
Link to Another Castle by selecting a button and using the embed code provided more...

Prince of Persia 2: The Shadow and the Flame Platformer