Alt Space is more than just a game it's going to give the gamer the ability to choose their own destiny.

Set in a distant future where mankind is in the final battle for earth, a science ship receives damage to their hyper drive, jumping them too close to a black hole.

The crew of the science vessel emerges in a yet unexplored region of space. Do you have the skills, to find allies, fend off enemies and ultimately reach earth in time to save mankind with your new found allies?

Full back story to follow in the coming weeks.

Alt Space Update 1:
We have been hard at work over the past week. Unfortunately it is mostly back-end and idea generation. However we feel it is important to update you, even if it is just in words for now.

Our current Goal for February is to:
1. Complete the Main Menu UI
2. Design two 3d models of space ships
3. Record a basic ship to ship battle.

Over the last week we focused a lot of effort on identifying the best way forward to ensure Alt Space sees it’s self on Desura and Steam Greenlight in the future.Over the past week we have been able to [after much discussion] select two ship models, we will release more appealing images in another update.

Gameplay Mechanics were a hot topic as well, primarily around handling ship and crew leveling. One Concept was a basic talent tree similar to MMORPG’s where you would select a specific tree.

Here is a mock-up of the engine talent tree: 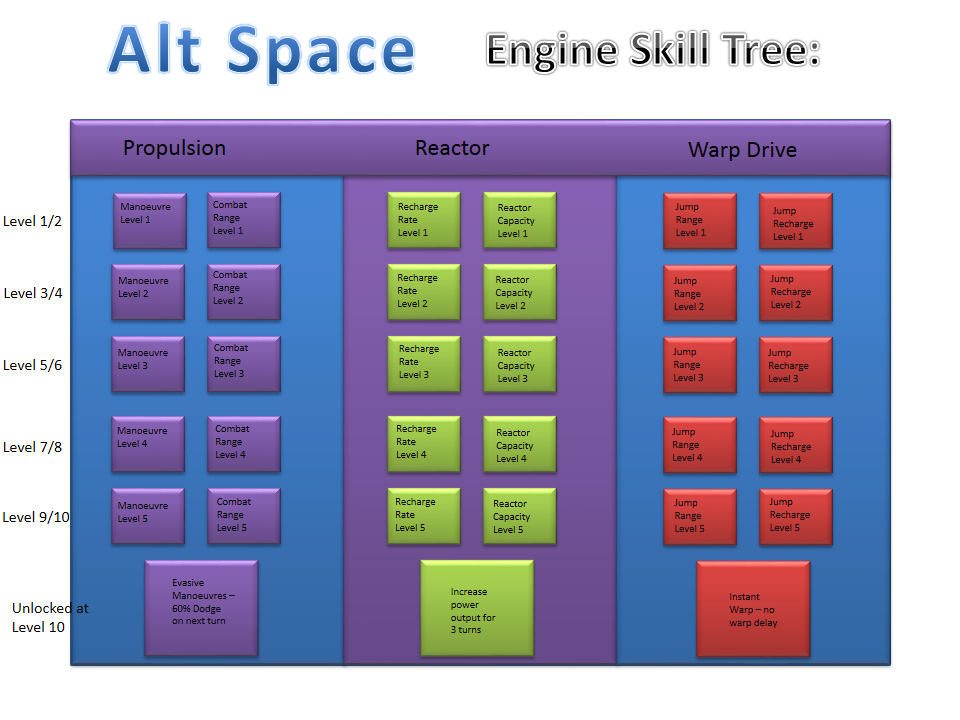 Here is a mock-up of the engineer talent tree:

However we believe that they are too disjointed and we are busy merging the two together in a more traditional technology tree.This will enable the player to easily see what is needed to unlock new technology and at the same time provide a place to spend all those talent points.

We will release another update on Friday, which should show case the first enemy ship and the final Tech Tree and with any luck the Main Menu!

We have been working on a few ideas on how best to handle ship to ship movement during combat and ultimately ended up with this design.

First of many ships!

In this post we will expand on how you will be able to build a ship and the final outcome.

Check out our thought process for crew leveling and ship equipment!

how much will the game cost?

And one more thing, I would love to help with some art. If you need just contact me here on DB or via my hotmail
hallajs@hotmail.no
I have not done any work previus except some silly cartoons on youtube and i made 2 texturepacks for minecraft. Making textures is in other words a hobby of mine

I can't wait for the update!

Looks cool!
Will you be able to add your own types of weapons and stuff?

The current design will allow you to place weapons that are part of the game on specific hard points on the various components.

You would be able add your own selection of missiles from the in game selection, assuming you have leveled up your ships missile tree.

We are looking at how best to make Alt Space mod friendly so that the community can include their own ship components and possibly weapons in the future.

Our Devlopers website will be up this weekend along with a forum :)

Codex of Victory Turn Based Strategy