Back Story
In the year 2015, a meteoroid shower pounded Earth, devastating nations worldwide, and tearing apart infrastructure. The world was ill prepared for what happened next. In the depths of the meteoroids were bacteria infected with what can only be called a hyper-virus. It spread, unstoppable. Animals, plants, fungi, bacteria... it infected everything. Nothing was left untouched. It mutated too quickly. But mutations were not limited to the virus.

As the virus spliced into the host's DNA, it carried with it DNA it had taken from previous hosts, and spliced that DNA into its new host as well. As the host cells reproduced, they did so with the new DNA chains altered by the virus. Mutations were rampant, and the world fell apart.

It is now the year 2045. We have lost our world to mutation, plague, and war. Corrupted versions of humanity now vie for power. Monsters rage in our plains, deserts, forests, and oceans. Our best minds have been taken from us by death and destruction. We do what we can to survive, and cry out, that we will not be silenced! We will live. We will survive the AfterMath.

Manatee Studios plods on with the development of AfterMath!

Recruitment
There's been a flurry of activity at Manatee Studios. Since our volunteer job advertisements were posted on IndieDB.com, we've gotten a number of great team members! Thanks IndieDB community!

If you would like to apply for one of these volunteer positions, please visit:
Manateestudios.com

Foothold Demo Development
Things are plodding along, and we're beginning to see some development taking place.

The main male demo character model is finished, and is awaiting rigging so he can be animated. The face that is painted on him is actually the face of the developer who painted him. Take a number ladies! 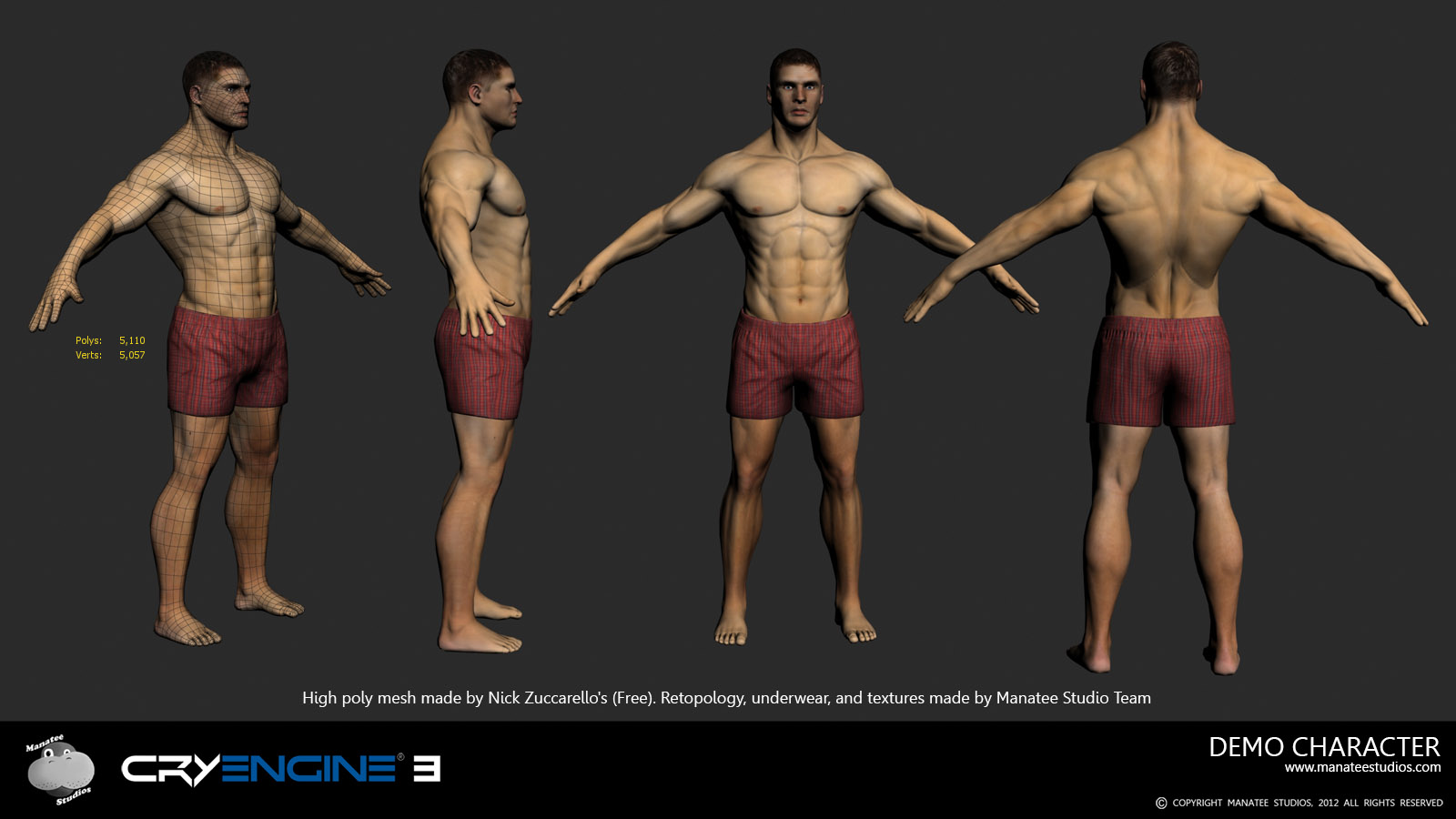 Vegetation is slowly being developed, and will soon be implemented into the map. We're playing with different ideas for grass and foliage. 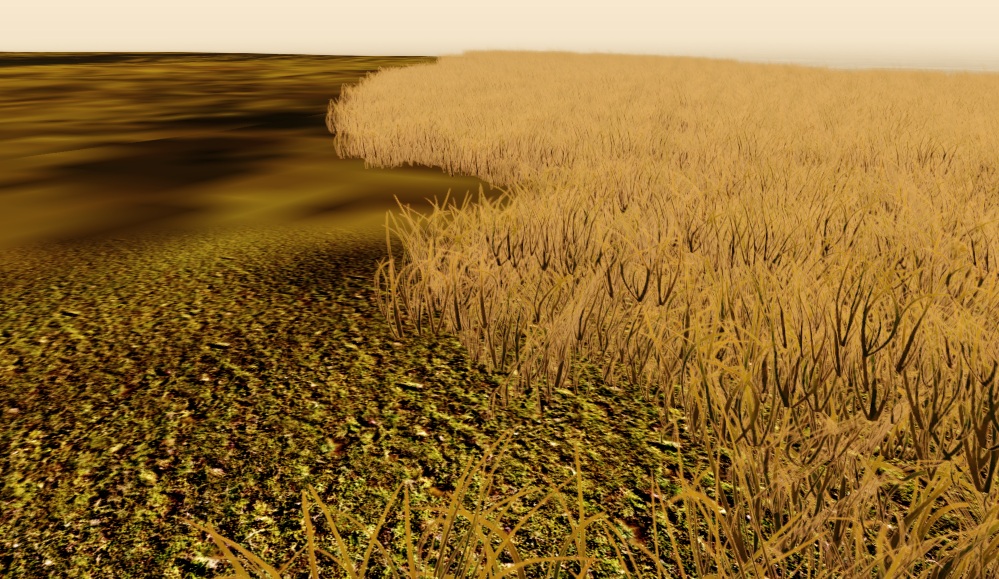 The log walls are almost done. Their developer is working on the last bits and pieces of the stairway for the walls, and then they should be ready to be placed in the map. 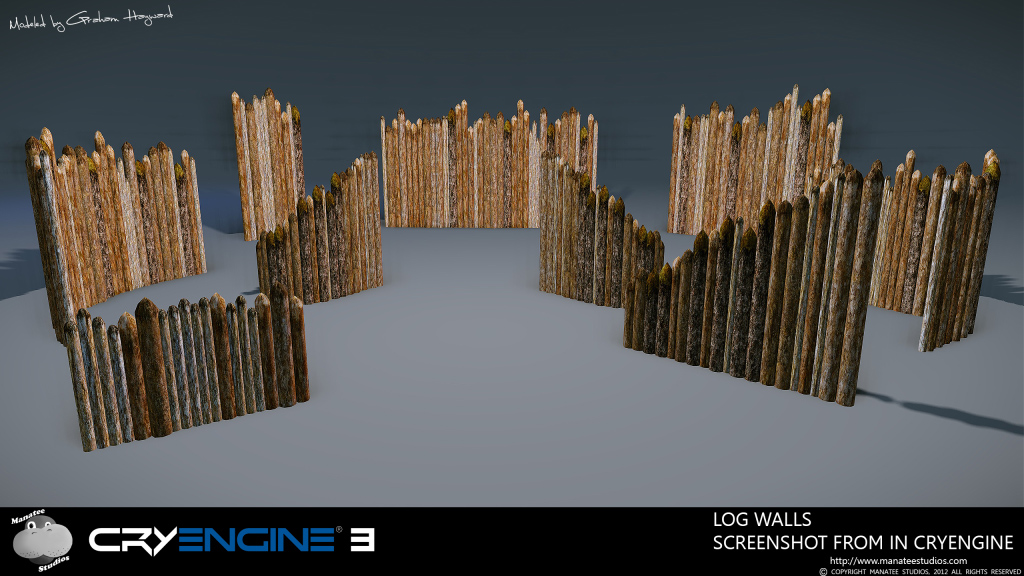 We've released the AfterMath Foothold Demo GDD to the public. Download it here, and see where we're headed!

What's Next?
Our prop team is concentrating on designing buildings for the Foothold Demo map. We'll be building models for the map itself, like vegetation, ruins, and player owned buildings.

Our character team is busy working on new equipment, weapons, clothing, and armor for the main male demo character.

Once we have something of some real substance to show you, we'll post another irregular update that will include a video of development footage. We'll have the walls, a couple buildings, and an equipped demo character moving around in game to show you. =)

So until then... Go eat some briskets and be a fat, happy Manatee!

With the discovery of The Grimlands ( Grimlands.gamigo.com ) Manatee Studios is shutting down development of AfterMath. As an indie developer, we need to bring something new to the table to establish ourselves as a competitor in the gaming industry. Unfortunately, we were beaten to the punch. The Grimlands is already in beta.

It's been fun, but it's back to the drawing board.

So u guys just gave up just because a game exists similar to yours?

Not just similar. It included what we were considering new and innovative: the skill system. It's the same game.

But, I'm working on another game now, with just one friend of mine, the guy who was doing the music for AfterMath. We just want to get something built, and say, "We finished something." So we're staying with a simple project, and then we'll up our game over time. AfterMath wont ever come back under development, but we have some other projects that we're hoping to work on after this one. We're in Unity now, for this small project. After this, we'll reassess the situation, and contact some former members about project ideas.

I was tracking game developers to make sure my game concept isn't already taken – and it isn't :D – but this game actually looks interesting! Props for the eye-catching intro ;)

Manatee Studios will be changing development of AfterMath from the CryENGINE 3 SDK to the Hero Engine.

Why?
Because we are blown away by the ease, usability, and learning curve of the Hero Engine. The repository services are outstanding. The real time editing is absolutely FANTASTIC. And most of all... The engine is production ready!

Don't like Unity. Their free version doesn't have much in the way of toolset to build an MMO, and I'm not paying $1500 per client for the pro version. Just not happening.

Hero Engine is the best engine for what we're doing, bar none. We're actively seeking a good programmer, so if you have any friends that want to play around with Hero Script, let them know we're looking.

do you still need a coder

Yes. Please understand the massive scale of this project before you sign up. So many join and turn around and disappear once they really see what we're doing. This is a LOT of work, and not to be undertaken by the faint of heart!

I got a few questions, do you need coders for the engine code(c++) or for scripting(LUA). Also you state that a lot of people disappear from the project, is it because you are demanding a lot of work in a short period of time? Also how many people are on your team now?

We need both. We have about 20 folks so far (2 of which are programmers), but the programmers remain completely silent, unfortunately. I don't know enough about programming to know what they need, and I cannot seem to get something from them to help them get started. Essentially, we have 0 (zero) active programmers right now.

I have not set up any type of work schedule yet, since I can't say what they'll need. I have no reference for their work yet. I have very basic C++ knowledge, but busy with so many other things, that I haven't been able to look into programming at all.

Ok I'll get back to you. I really dont want to be a coder for this project if I am unable to do what you tell me to do So i really need to know if the other coders will be able to help out for guidance and referecning or I will have to do the work and try to figure stuff on my own. Also it depends on the complexity of the stuff you want coded. I have already practiced coding cryengine3 but its so damn hard. the hardest thing I have ever used. You should have gone ahead with unity bro.

Everything's got pros and cons. Unity also wants $1500 for the pro version, and we're not an established studio yet, so I don't have money like that to give out to each new team member. We were looking at Hero Engine, but decided against it.

I want more than one programmer, that's for sure. So I don't want just 1 programmer with tons of work piled on their shoulders. That wouldn't be right. But what I would like, is a programmer that can help me out by telling me what all they need, so I can go find it for them. ;) Somebody that can take the bull by the horns, and tell it where it needs to go.

okay are you guys using dropbox or what, I really dont understand how the coding process will work with the visual studio solution file and if there is a way to determine which parts of the code were added/removed since theres a lot of classes in the file.

We are using Dropbox for temporary storage, and an SVN server for permanent storage and development. The engine, and all game files (not master files) are on the SVN server. Programmers should be able to just code into the engine, and commit it to the SVN files. We keep lots of redundant backups, in case it gets messed up.

Twitter
Tags
Embed Buttons
Link to After Math by selecting a button and using the embed code provided more...