You enter the room. Squinting your eyes under the dim light, you can make up the improbable form of a pig with wings. It is glorious. “We are Pigasus. Mighty game developers”, asserts the airborne swine, “And this here is Adventurezator”.

“Adventurezator is an adventure game. Well, sort of. You see, we all love adventure games (as all sentient beings in their right minds should) but you must admit that even the best of them lack something very special: good old YOU.”

“In Adventurezator, you not only play an ever-renewed pile of brilliantly designed point-and-click adventures: you actually get to design your own, and publish them too! The best part? You can do that without all that boring programming, or math. It’s all very technical, but (if we had to put it in layman’s terms) it works like a very fancy cable connected directly to your brilliance.”

You stare at the flying mammal for a while, barely containing your happiness. But still, you could use a little more detailed information. Something like a feature list. Maybe with bullet points. Pigasus opens its inventory and gladly gives it to you.

“Of course, all of this is a glimpse into THE FUTURE, since Adventurezator is still under development. Expect an Alpha in the comming months, and the release by Q1 2014“. Before you can ask anything else, Pigasus Games shouts “look behind you, a three-headed monkey!” and vanishes.

Behind the scenes: a closer look at the development process

In this update, I'm going to give you a peek into the development process of both the Adventurezator (the platform), and When Pigs Fly (the game), and how they both help each other.

We are using the campaign When Pigs Fly as a guide to what content we need to add to the game in order to give the players enough content to be able to create almost everything they'd need in a given setting. We have enumerated what settings we'd want to see in a fantasy world (such as rural, village, castle, dungeon, etc), and have at least one level in the campaign use that setting.

So unlike the normal development of an adventure game, where the story drives what content and assets needs to be developed, in the Adventurezator it works the other way around - the content we have decided needs to be in a fantasy setting helped us shape the story of the campaign. Then we pick that story and go into the design of each of the levels, which in turn will point to us what content needs to be available in a given setting, in a feedback loop that helps us keep everything neatly set up.

Let's take a quick look into the design of the Fancy Castle content set (Adventurezator) / Castle Crashers level (When Pigs Fly) to see how that goes.

First, our Game Designer draws a diagram with a bunch of rooms, where they connect to each other, and where important objects for the level will be. It's as ugly as they come, so I won't paste it here.

Then, our art director takes that and draws what a real nice looking version of it would look like. In a sense, she's also doing a bit of level design. This is also different from the usual game development process, because the level design is not the most important thing at this stage - the content and how it looks in any level design is, since it will also be used by the players in their level designs.

This is what that concept for the Castle Crashers level looked like: 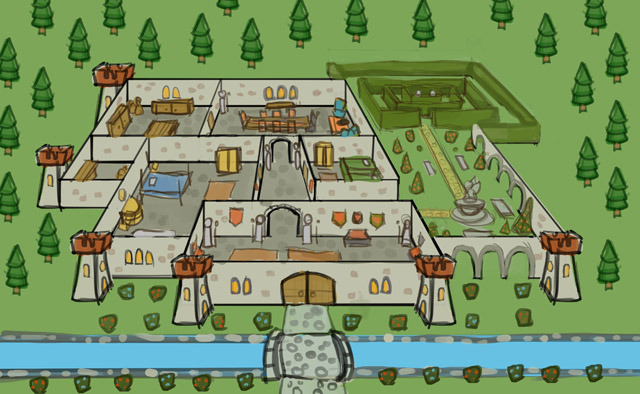 That concept will then help us add and remove objects to the list of content we need in the Fancy Castle set. We then get concept art done for each and every one of them, as well as decide if additional behaviours will need to be implemented for any of them: 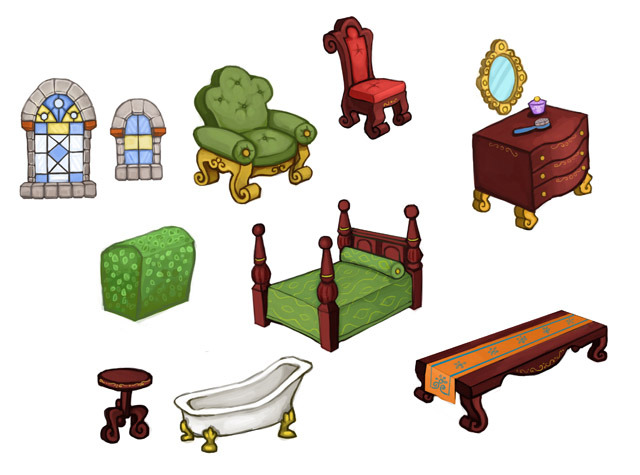 Then it gets modeled: 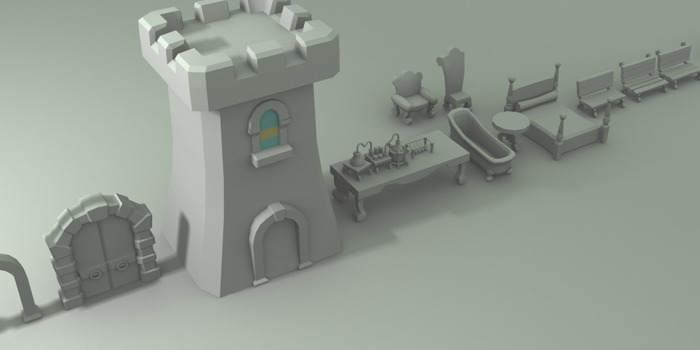 Then textures, material set up, and all of the tech stuff needed to put the assets into the game ( I wont bother you with that boring stuff! =] ) 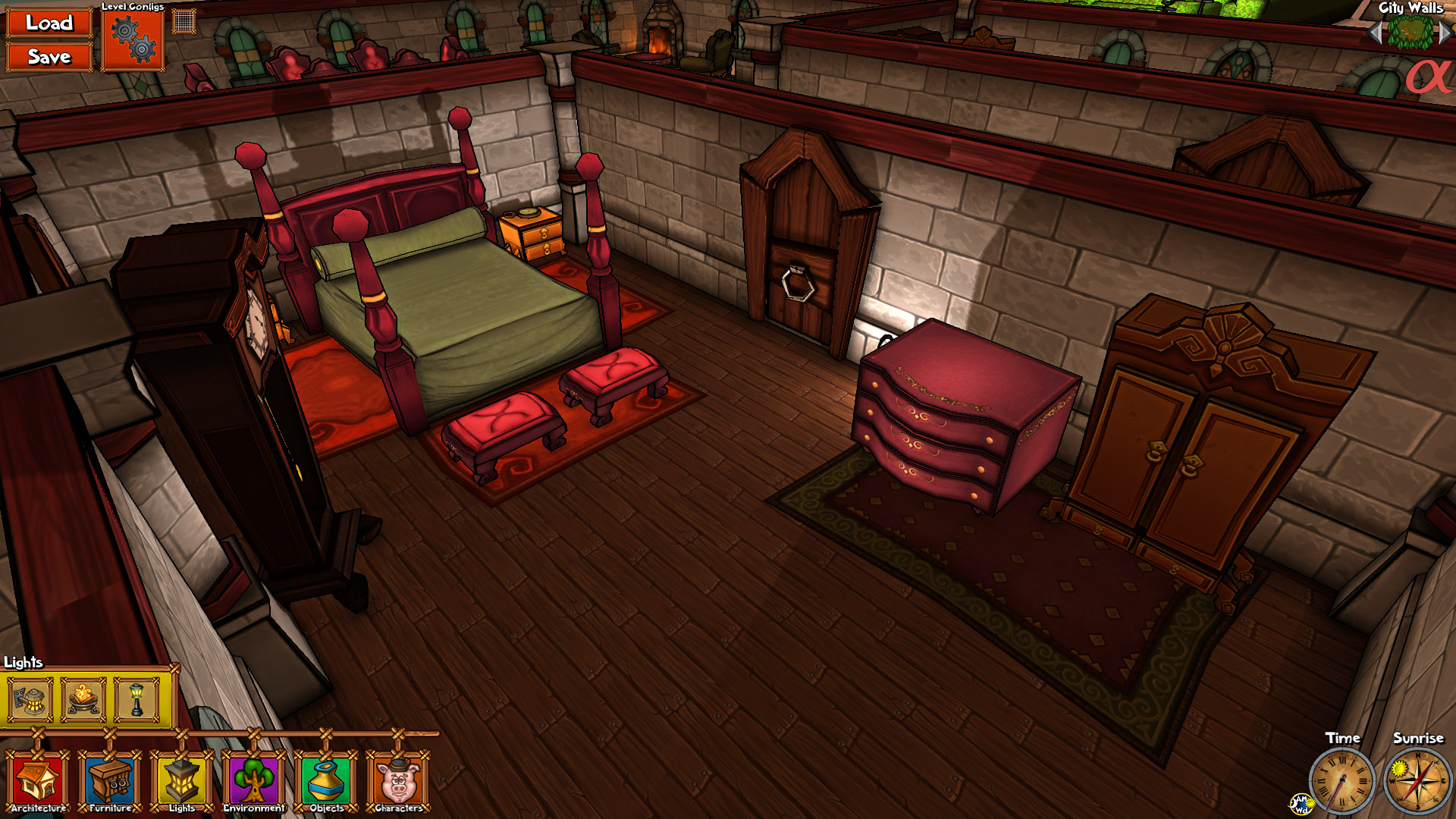 When making this level we also realized we are going to need a fountain, which will end up as a cute peeing pigasus:

And we also added the weeping angels. In this case I have to confess we cheated a bit, and let the story guide the assets. We have an awesome twist in the story involving the weeping angels, specially if you are a doctor who fan, but we won't give out too many spoilers now - you'll have to wait for the release to see the real thing. 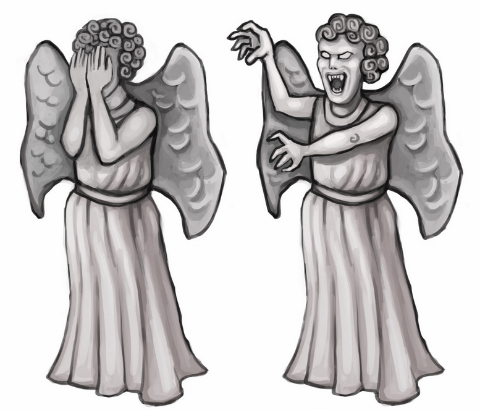 That's it for this week update, thanks for reading!
Seeya!

In this weekly update, we are going to show you a NPC feature called the schedule list. You will be able to set a list of tasks for your npcs and watch...

A quick post to show some of the features that we´ve been working on latetly.

Kickstarter for the Adventurezator is running now!

Pledged $50 for the Alpha access and shared on Facebook :) I really hope you'll manage to fund the game. Can't wait for trying out the level editor! :)

Tags
Embed Buttons
Link to Adventurezator: When Pigs Fly by selecting a button and using the embed code provided more...

Teresa Moontyners - In the lair of the beast Point and Click