A Druid's Duel is a fast paced turn-based strategy game set in a world of Celtic lore where players can create and destroy the board by harnessing the power of nature. Whether it's the single player story told across more than 130 levels, local play or online play for up to 4 players, there's enough variety for new and experienced strategy gamers alike. 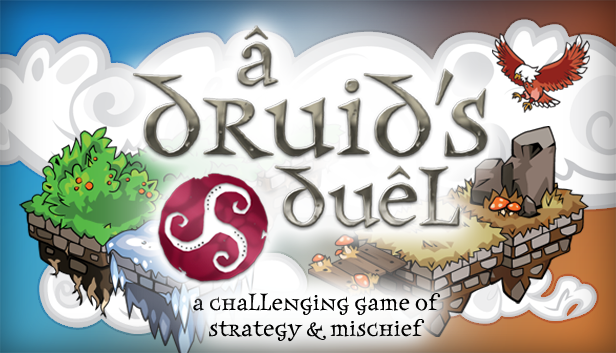 It is with an enormous bundle of excitement, gratitude, anxiety, and pride that I offer to you the finished game of A Druid's Duel. Available now on Steam, Humble Store, and a host of other digital stores across the world wide web! Go get your copy for Mac, Windows, or Linux!

Don't Take My Word For It

A number of previews and reviews have gone up. You can get a list of them on our Press page. 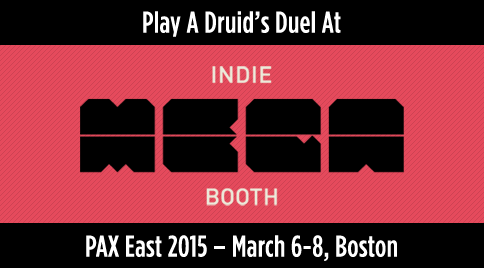 I am extremely honored to have A Druid's Duel selected to be a part of the wildly popular Indie MEGABOOTH!

I will be on hand showing off the game next week at PAX East in Boston. As you know, I showed 'Druids' at PAX East last year, having been a PAX attendee for years and years. I have the opportunity to reach more people than ever by being a part of this amazing collection of top-notch games.

I am so humbled and grateful to be among such a great group of successful developers. Two years ago I attended PAX and spent a lot of time among the MEGABOOTH and could only think, "Someday I could be standing here..." It was one of my goals when I started out on this crazy adventure and now, to have achieved it, I could not be more happy or excited. If you attend the show, please stop by and say "hi."

You can, of course, continue to follow the development and chatter on Twitter and Facebook! The online gameplay is just beginning and will be seeing updates and improvements over the coming months.

A Druid's Duel will still be making its way to iOS in the near future, so if mobile gaming is more your thing, keep an eye out for more news on that front.

A Druid's Duel will hit online stores across the globe on February 25th. The game contains more than 130 levels against the AI, local multieplayer gameplay...

I've been quietly working my tail off on the last mile of development for A Druid's Duel. Namely, the online multiplayer features. I'm happy to report...

The Single Player Campaign is complete and in the hands of Early Access Backers and trusted play testers! The Six Seasons Alpha contains 133 carefully...

Huge update on Wintermourne and Deepwinter milestones as well as big changes to the gameplay of A Drud's Duel. Read about the completion of the Winter...

Indie
Tags
Embed Buttons
Link to A Druid's Duel by selecting a button and using the embed code provided more...