A look at weapon classes, customization and how they work in Killing, My Friend.

Posted by Hard-BoiledSoftware on Jun 6th, 2015

This is Dwayne Douglass, lead designer on Killing, My Friend and I wanted to talk about our weapon system in KMF and its similarities and unique differences to the current crop of FPS shooters. And also a compare and contrast to Action Half-Life for any of the fans of or mod who are interested.

In AHL the design goal was to have all the weapons balanced with every other weapon leaving the player to decide which load-out of weapons and gear fits their gameplay style best instead of which weapon is best. In Killing, My Friend we’ve taken that a step further. All the weapons available in Killing, My Friend are archetypes or in our case, classes. The classes cover many of the most popular weapon classes like most games and include Assault Rifles, Shotguns, Sub Machine Guns, a variety of Pistols like 9mm semi-autos or Magnum revolvers and the like. All have specific gameplay differences with range, ammo count, ROF, etc. But, rather than specific weapons that you’d find in other shooters, each class has one set of stats with a wide variety of makes and models. They function the same no matter how they look. On an action movie set, the weapons just have to look cool, not function to their specific real-world specs. This also allows us to make the weapon models as customizable as the characters. 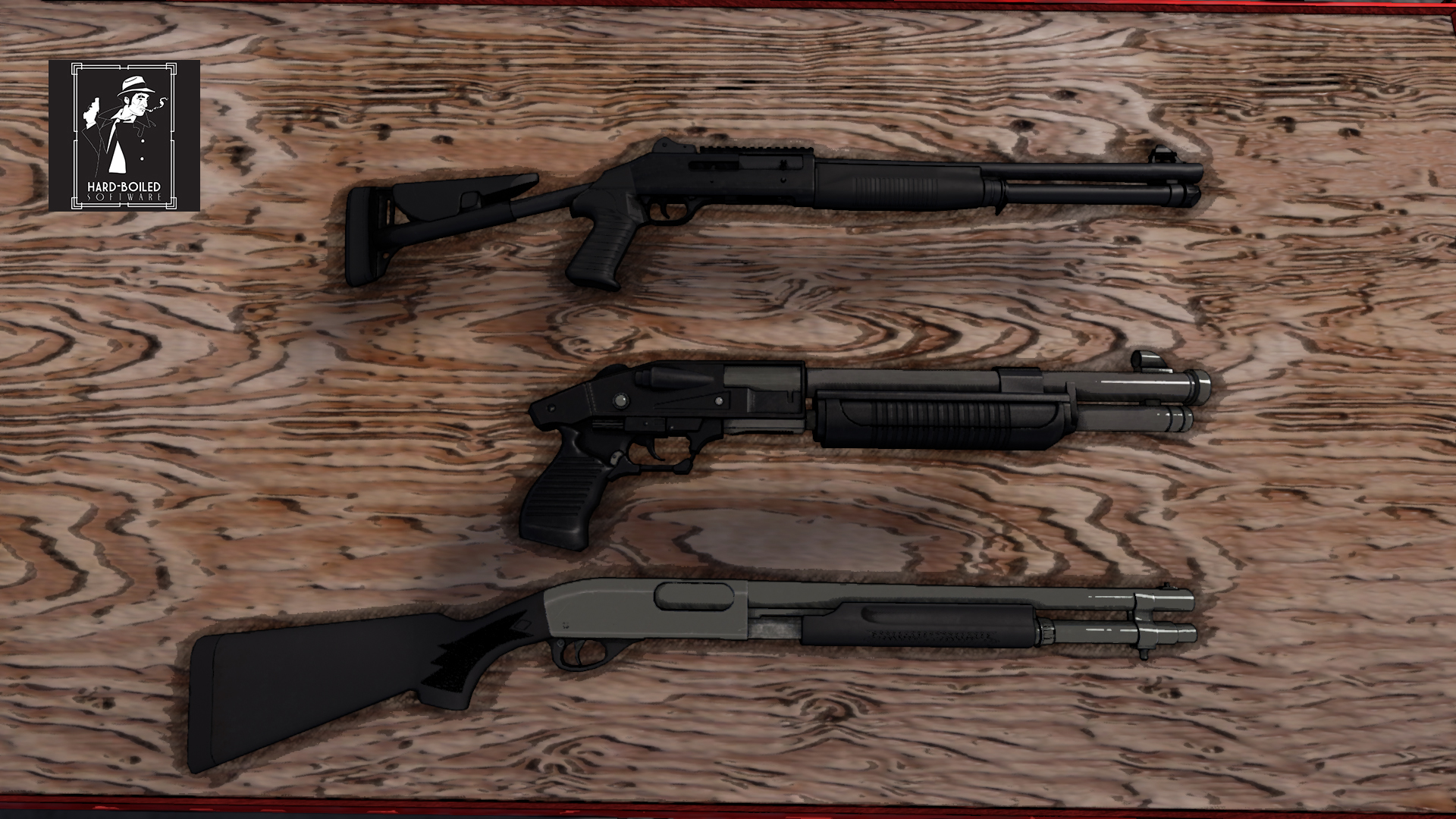 An example of the choices available for the Shotguns class. Despite how they differ in the real world (the semi-auto Benelli M4 vs the pump-action Remington 870 and a generic starter pump shotgun) they will function exactly the same in KMF.

There are five sidearm classes, six primary weapon classes which includes the ability to dual wield sidearms as a primary weapon choice. The standard load out consists of one primary weapon in the Primary Weapon slot (if you choose to dual-wield pistols then that’s a total of 3 pistols you are carrying mister), one sidearm in the Sidearm slot, a single knife (which can be thrown in a pinch) and one piece of special equipment in the Equipment slot. The full list of weapon classes looks like this: 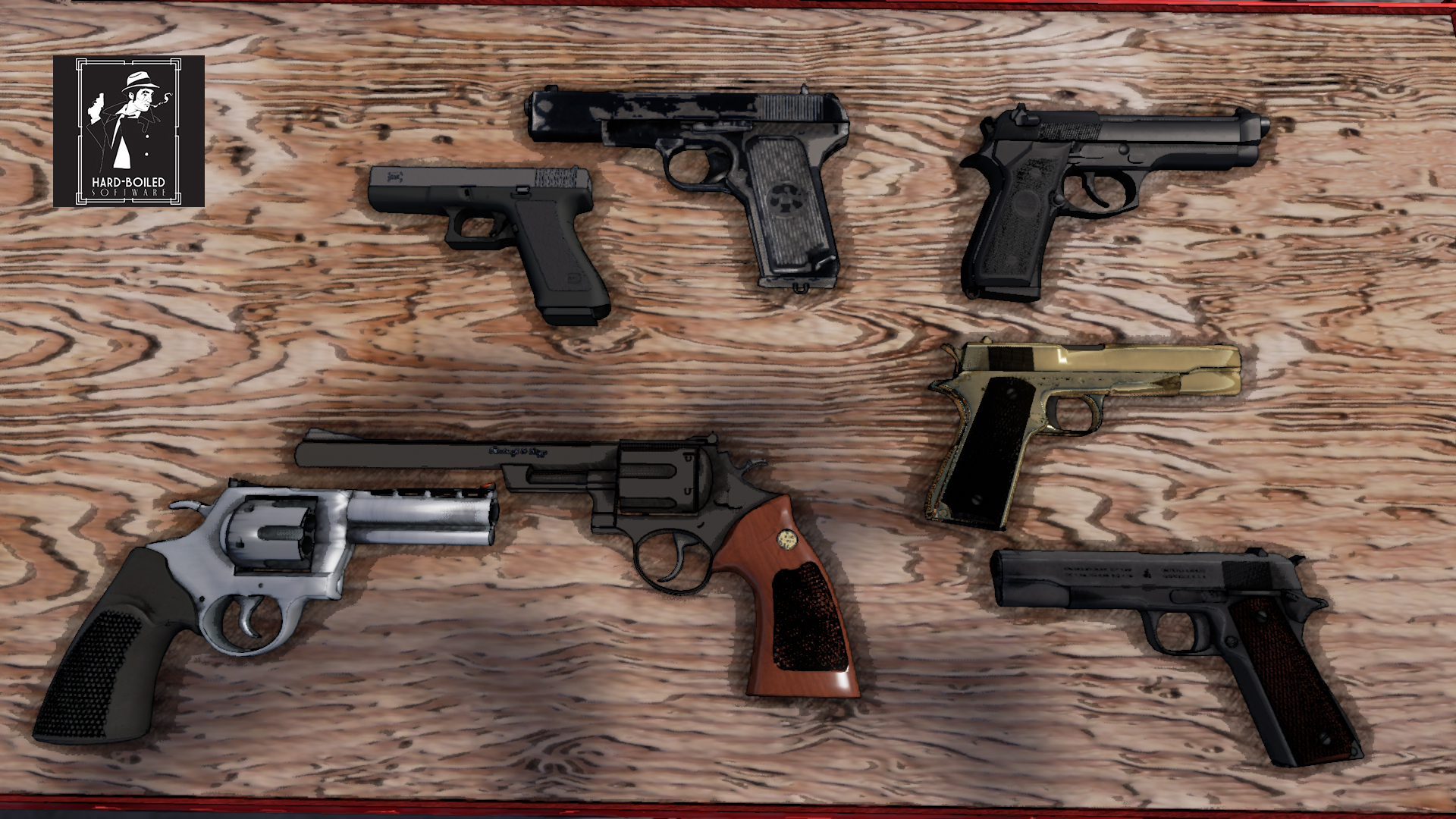 A variety of pistol choices with special emphasis on iconic action movie choices. The Die Hard Beretta, the Hard-Boiled Takarovs and Dirty Harry Model 29 .44 magnum we like to call the Murtaugh & Riggs M29. Also shown are choices that are simple texture based variations on the classic 1911’s as seen in movies like Last Man Standing or Face/Off with a standard or gold textures. 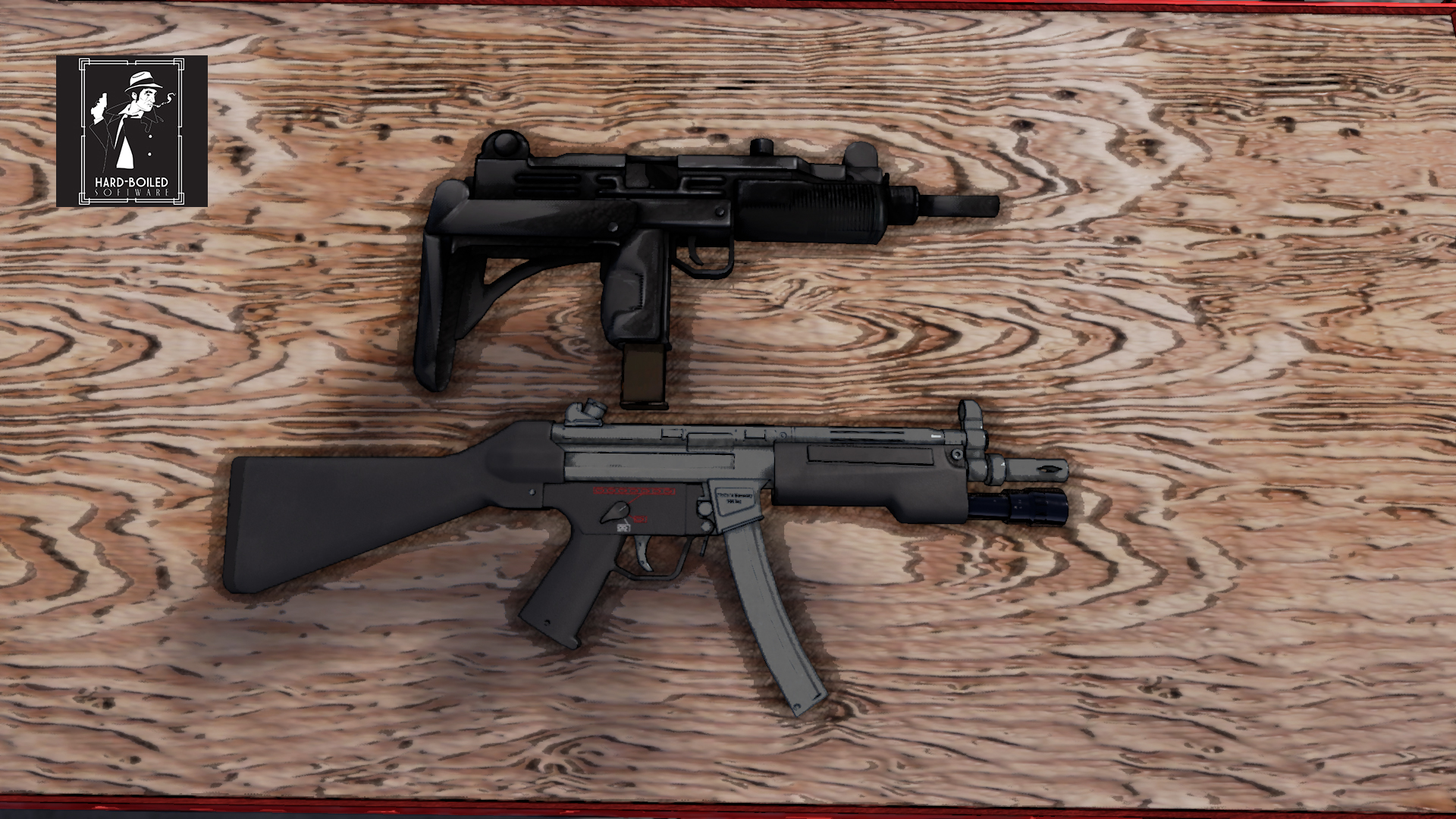 Another example of the choices available, this time for the Sub Machinegun class. A classic Uzi because nothing says 80’s action movie like an Uzi, and a more 90’s MP5. 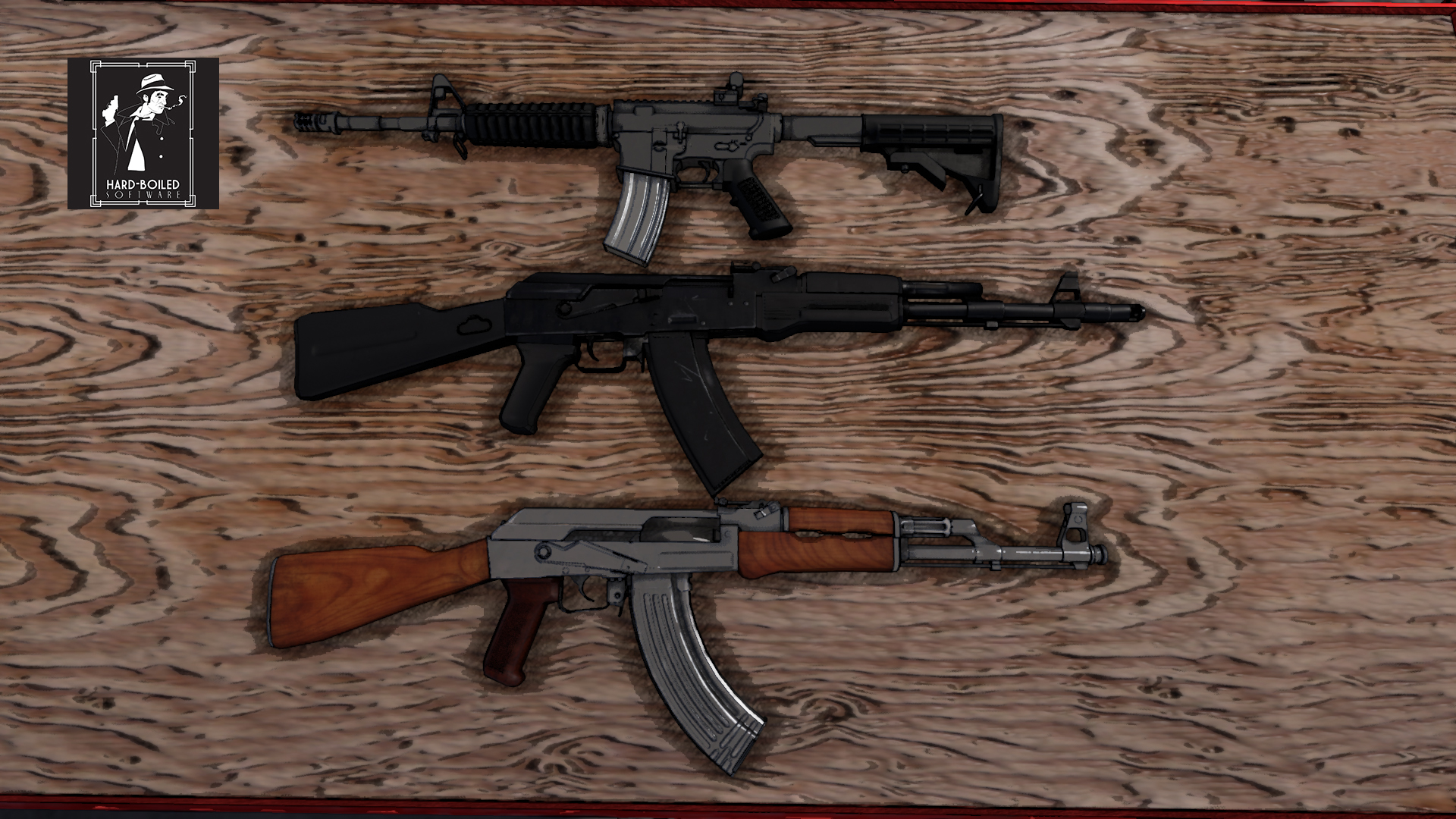 The Assault Rifle class can be represented by different makes such as an M4 or different models of essentially the same gun with the two different AK-47’s pictured.

For AHL fans, there is one major difference in weapon classes between KMF and AHL and that’s the DMR and lack of a proper Sniper Rifle class. The DMR will basically function like the old semi-auto sniper rifle with some other stat changes keeping the action a little more close up and action-y. This was a design choice based on the style of game we are making vs. what AHL and the Action franchise in general is as a multiplayer game. However, there will be a way to unlock a classic sniper rifle if that’s your thing that I’ll get into in our next feature update! 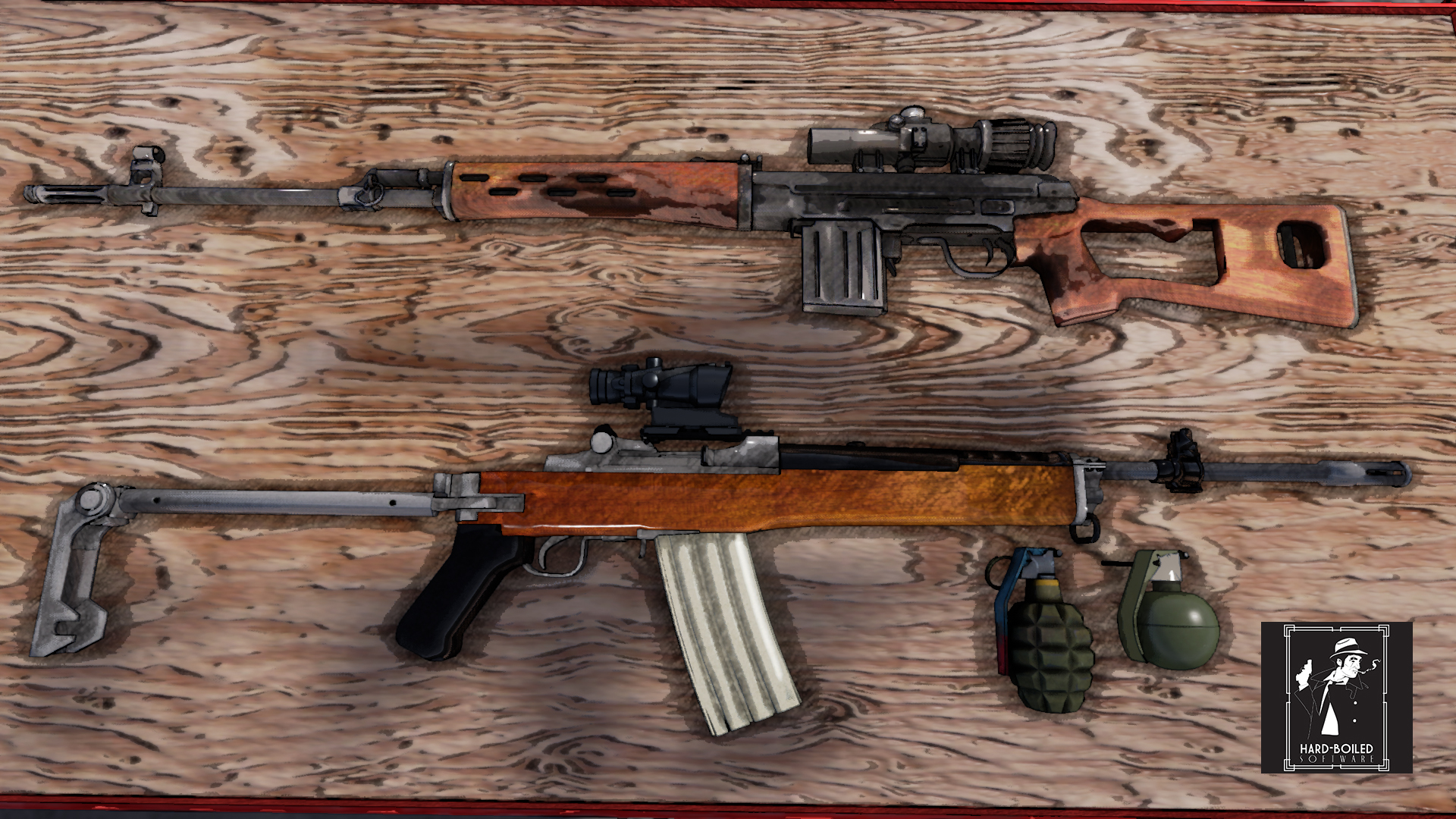 The DMR class can have a wide range of makes and models and still fall into the class. In this case the classic Russian DMR, Dragunov and an homage to a weapon made famous by the A-Team something we like to call the Murdock BA14. Also note that even the grenades can look how you want…

this looks great so far - is this expected to be released on steam in the near future? if so what kind of payment model are you planning on using?

We are looking to release on Steam in fall of 2016 with a standard, one-time payment.

I like the system! also, I just watched Hard Boiled yesterday... and now I'm totally exited for this!

Oops, there is a small mistake, sir
It's not Druganov, but Dragunov

Fixed it! Thanks for the head's up!