A key element to any role play game, player customization of upgrades for your character.

No role play game goes without it and it is an area we desperately needed to improve on from Glyph Quest: the upgrades.

GQ had very limited upgrades. Players could buy (using in game gold) improvements lengthening spells, allowing combo spells and summons, increased bag space and two sets of robes to boost defense. Damage dealt by spells was upgraded by raising your 'attunement' to an element by casting spells. It was all very basic - RPG lite if you will.

In Super Glyph Quest we really wanted to get everything we missed in GQ into the sequel, so to this end we needed to re-do the entire upgrade system.

To Much, To Fast.

This game uses a lot of typical RPG tropes so we knew the upgrade system would involve making improvements to the characters attack, their defense and adding new utilities and abilities. We also knew we wanted to avoid presenting this as the old World of Warcraft or League of Legends three tier tree upgrade system. It's obvious and feels a little stale tho familiar to RPG fans so our first design was an elaborate upgrade map, similar in a way to the sphere grid from Final Fantasy 8. 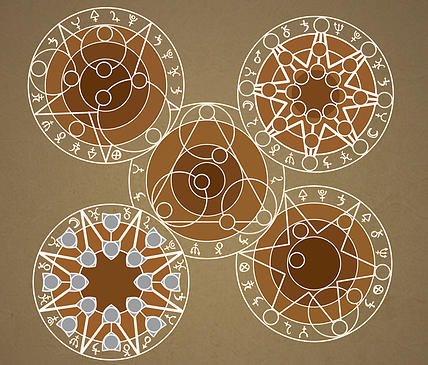 We've been using the 'spell map' as a motif since GQ and so our first upgrade system looked a bit like this.

The maps were for defense, attack, utility, elemental attack and elemental defense. Each small ring on this image represented an upgrade. The player would be awarded 'tokens' on leveling up that they could spend acquiring an upgrade. Some of them needed tokens to be spent in other upgrades before becoming available and each map had areas locked by level (the colored circles).

We really liked this. It was a huge leap forward from GQ which gave the player plenty of choice and freedom to evolve how they wanted. The problem was it was too big, there was too much freedom.

We have a tendency to design games that we want to play, for ourselves, and as seasoned gamers we take a lot for granted and dive straight into the deep end (also Alex has a history of making games too hard). As such we sometimes have to remind ourselves that we are not the only people playing this game.

If Super was coming to PC this leveling system would probably still be in, but as a mobile title it's just too much for the casual gamer. We don't want to make our game inaccessible to the majority of gamers on mobile, but we also don't want to limit the upgrades system. 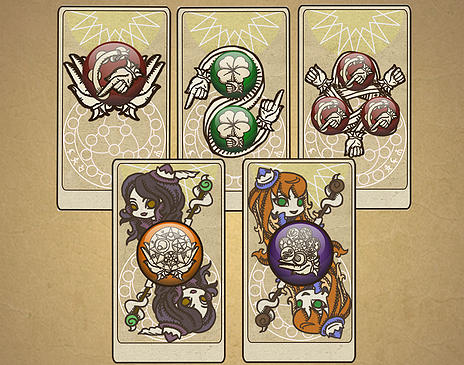 After a lot of post-it notes and heated debate we settled on the card system. Behind the scenes the system is pretty much the same, but on the surface the player is presented with a much more manageable concept.

Every time the player levels up they will have three upgrades to pick from, presented as a card. The upgrades are chosen at random from what is currently available to the player based on previous upgrades chosen and the players level. Some upgrades are now given to the player as story events, such as spell length and board size and elemental attack and defense have been moved out of upgrades and into the craft-able gear.

The player still has the freedom to evolve their character as they like, but the presentation is far less overwhelming. Once a player has chosen their upgrade it can be seen on a single upgrade map in their 'room' so they can track how they are progressing. 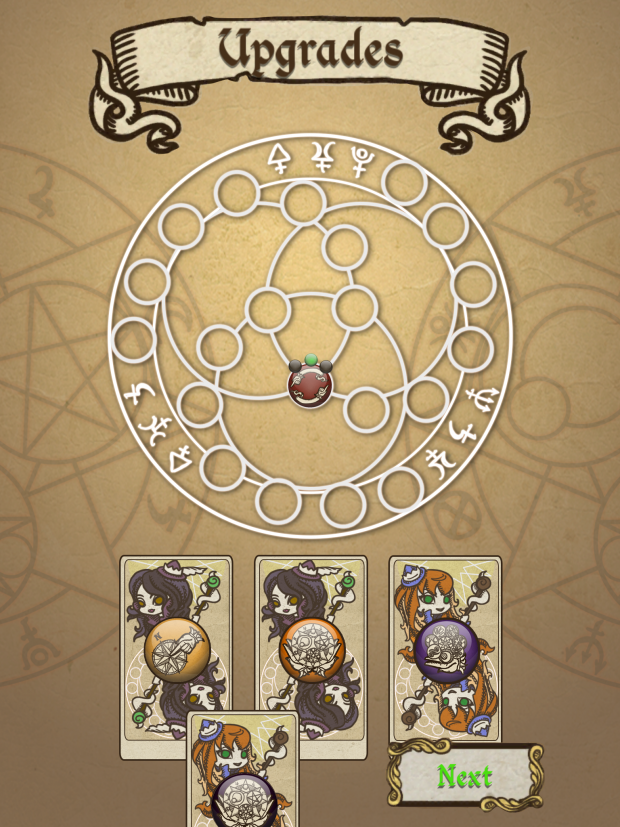 As players select their upgrades the spirals will fill up. One for Attack, one for Defense and the third Utility. All the upgrades that the player is given through story events appear under the upgrade map.

It's an elegant compromise which works and more importantly we're happy to play!