A list and explanation of the changes to the mod this time around.

The Seven Kingdoms: An Age of Petty Kings

With the release of build 6 tomorrow this article will explain many of the new features of the mod.

First off here is the official changelog: (Photos can be found below)

~ Fixed the Dun Tower building.
~ Fixed dueling ambition missing bracket. May have not been functioning correctly due to this issue.
~ Fixed missing bracket in the Charlemagne event chain relating to a meddling mother.
~ Cultural buildings added: Cornlander, Copperlander, & Goldman (all located in the Westerlands)
~ Hartenn wildlings added in the new Kingdom of the Hartshore, with the Men of the Frozen Shore as vassals.
~ Saliosi & Thenn wildlings added in the new Kingdom of Northern Highlands, with the Thenns holding the title.
~ Iron Islands united under a single title.
~ Reynelands and the Rock colours switched around, making the rock the more crimson of the two.
~ Evenstar Kingdom renamed to Straights of Tarth.
~ House Mudd tweaked somewhat. Primary heir is now a viable ruler, even if not preferred over the hammer.
~ House Mormont is now a loyal house within the court of the Starks - Bear island now falls under the control of the ironborn.
~ Fixed the Crake Queen title.
~ Edited the Mountain of The Moon, and Gate of the Moon province layout to make it more strategic.
~ Corrected the title flag for the Empire of The Dusklands, with tweaks to a number of existing flags.
~ Gulltown is now under Mountains and Moon instead of Runestone, to reflect that house Grafton had invaded and taken the county.
~ Tweaks to selectable bookmark characters appearances.
~ Many character trait and appearance edits.
~ Edits to the Pick Era bookmark icon.
~ Added localisation for the new Consolidate Realm decision.
~ Tweaked the title flag for The Kingdom of The God's Eye.
~ Corrected Durran 'Half-Blood's nickname.
~ Changed house Shett's religion to the Seven.
~ Tweaked house Royce.
~ Changed house Tollett's religion to the Seven.
~ Changed the Kingdom of the Deep Hill's religion to the Seven.
~ Changed the name of the Kingdom of The Deep Hills to the Kingdom of The Golden Hills.
~ No one now holds the Kingdom of the Eastmarch.
~ Corrected the capitals for most of the Petty Kingdoms.
~ Expanded the Kingdom of The Marches into the Stormlands.
~ Ursula Upcliff is now the head of house Upcliff.
~ The High Lordship of Plancard/Upcliff is now underneath the Kingdom of Runestone.
~ A few province names have changed.

~ AI will prioritise many titles over less prestigious titles now, due to dignity being set for just about every Kingdom and up.
~ Braavos as a nation will now be completely undeveloped at the game start, due to a development nerf.
~ Casus belli tweaks and edits.
! AI, under certain traits (ambitious, greedy, matrial and high intrigue) will now also use them.
! Kingdom subjugate will now subjugate an entire King-tier realm, instead of stripping away one Kingdom at a time.
! You can also now use the Kingdom subjugate if you have either Ambitious (as before), Socipath or Brilliant Strategist (war-minded).
~ Fixed the broke (minor) River in the White Knife region.
~ Hospital buildings offer tech related bonuses have been modified, giving either prestige or extra disease defence.
~ Iron Islands now has a heavily decentralised government, with a fully empowered council and elective succession.
~ Maimed, wounded and killed are more likely to fire in combat. Combat traits also generally decrease the chance of death, but do however increase the chance of injury.
~ Major rebalance of buildings, including minor edits to most uniques as well as some more significant edits to the following:
- Braavosi Titan nerfed heavily.
- Castles and temples produce high quality levies, whilst cities regain levy faster but produce worse men morale-wise and number wise.
- Castles and their core levels no longer grant light cavalry units, and give half the number of (base) levy, creating greater emphasis on other buildings, such as stables and recruitment posts.
- Eyrie now has the highest fort level of any holding when built, but takes a big hit to garrison size.
- Levy reinforcement reduced in castles, making levy reinforcement buildings more important.
- Many unique buildings reduce overall tax income by a percentage, rather than by a fixed value, to make their impact on economy more significant.
- Pirate and wildling buildings are now destroyed when conquered by a foreign culture.
- Pirate and wildling buildings nerfed (for castles and tribal) and higher levels are now also less common.
- Shipyard buildings, in general, have been modified somewhat to create a greater difference between the uniques.
- Static modifier values for castles/cities/temples edited.
- Temples provide a small number of knights.
- Viceroy's Palace nerfed, no longer needs to be so strong and avoids player-driven exploits for the holding.
~ Mountain and Hills terrain distributed to a number of areas where it would make sense.
- Hill Clansmen region in the North has been downgraded from Mountains terrain to Hills.
~ Mountains of the Moon, Bloody Gate and the Mountain Clans region are among them.
~ Night's Watch is no longer de jure North.
~ Restored Strong & Weak to their former vanilla function. Once again congenital traits, due to the presence of Zeus Brawny and frail. Effect is lower than vanilla, and offers no fertility bonus.
~ Strong / Weak Physique renamed to Strong/Weak Constitution, with a bigger impact on health and a boost to fertility.
~ The 'Pope' (High Septon) is no longer landed as a baron in oldtown, but landless.
~ Trait edits.
- Gregarious grants a single point into intrigue, as social characters may decieve others more easily or learn things they otherwise would not.
- Heartless now correctly conflicts with cruel.
- Slothful now grants a small learning boost, since lazy characters may be more inclined to read.
- Sociopath now conflicts with content, humble, shy and trusting to better reflect more common traits associated with it.
~ Valyria will now face independence revolts if ruled by a foreign house, be it Valyrian or not to prevent exploiting of mechanics.
~ You are no longer able to convert to spouse religion when you already share their religion (thanks for multiple community reports!).
~ You should now be able to swear fealty to the AI (King-to-King), so long as they like you (have at least 30 opinion).

+ A number of new rivers and streams in the North and the Vale.
+ Consolidation of Realms decision. Can be repeated for each of the Seven Kingdoms, destroying all Kingdoms in favour of a single Kingdom. Also grants 2k prestige.
+ Mostly unqiue unit modifiers for most of the cultures.
+ Restored settlement decisions. You can now change the capital barony in provinces again.
~ Cancer is somewhat less common now
~ Higher chance of an event, in general, firing during combat.
~ Skagosi Shipyard fixed. Now they are properly tiered.

~ Thanks to blackninja9939 for a couple of fixes.

Yes, the changes are quite extensive.

Here are some photos of the updated map:

King Titus Peake of The Marches 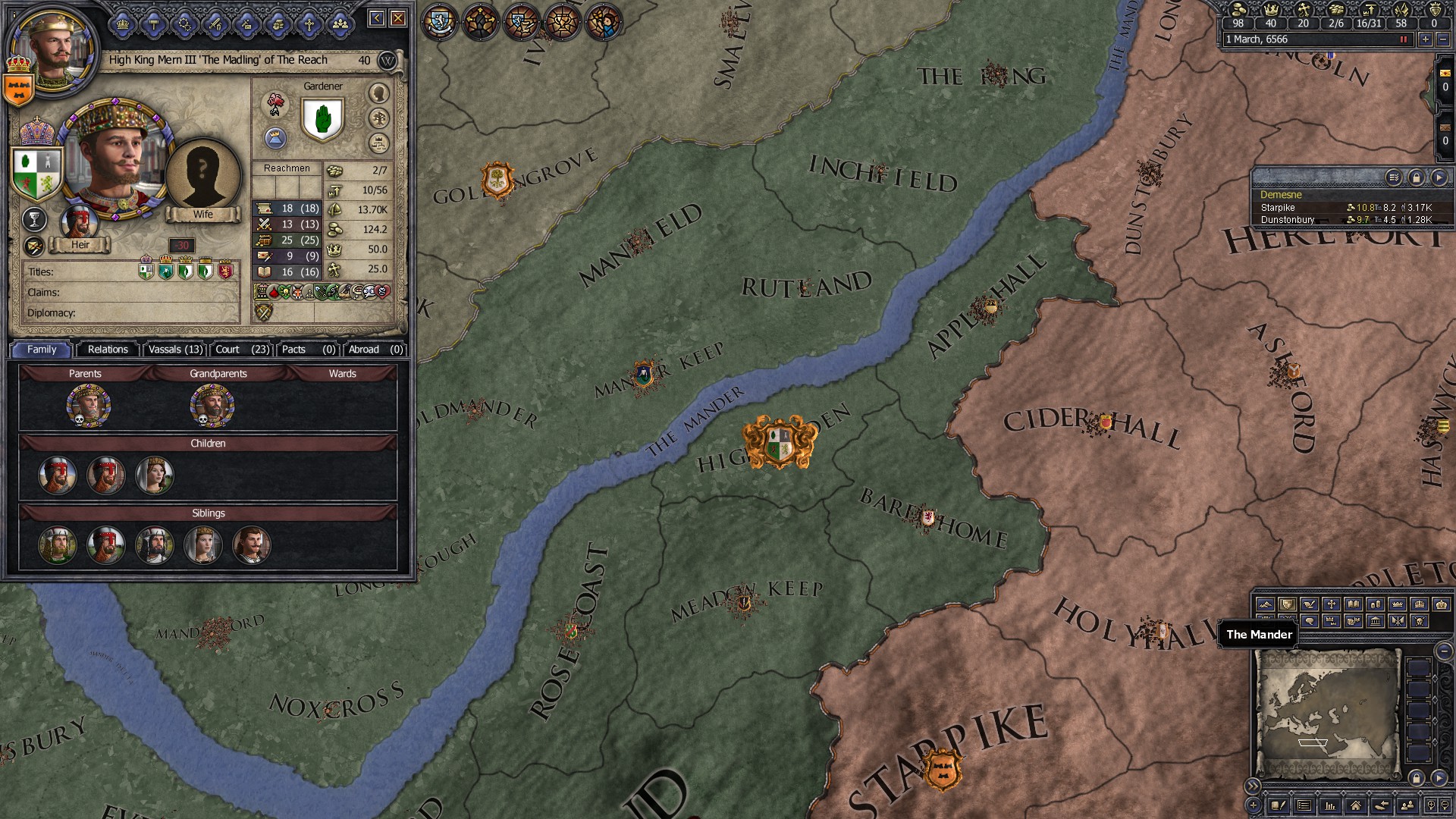 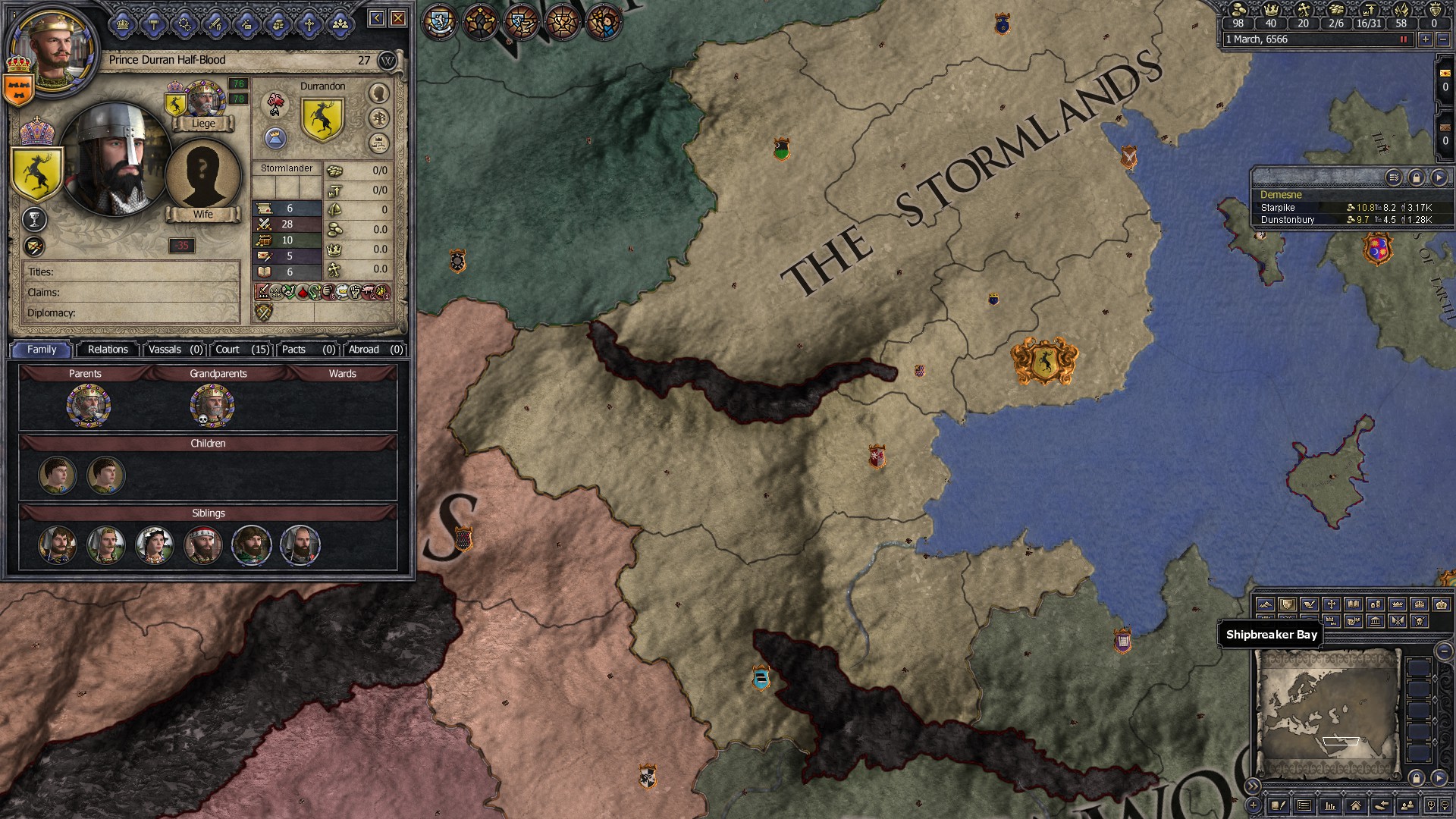 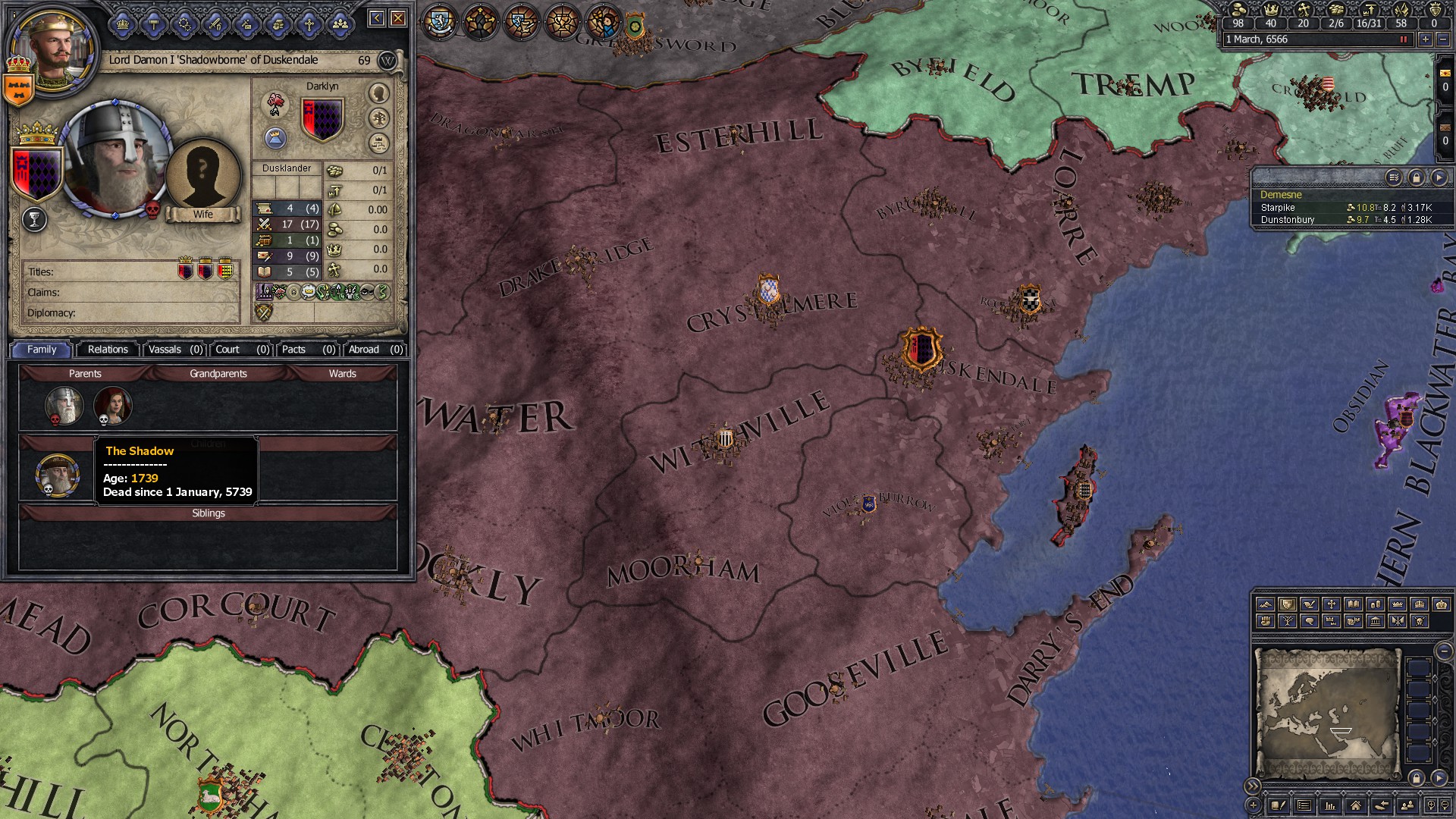 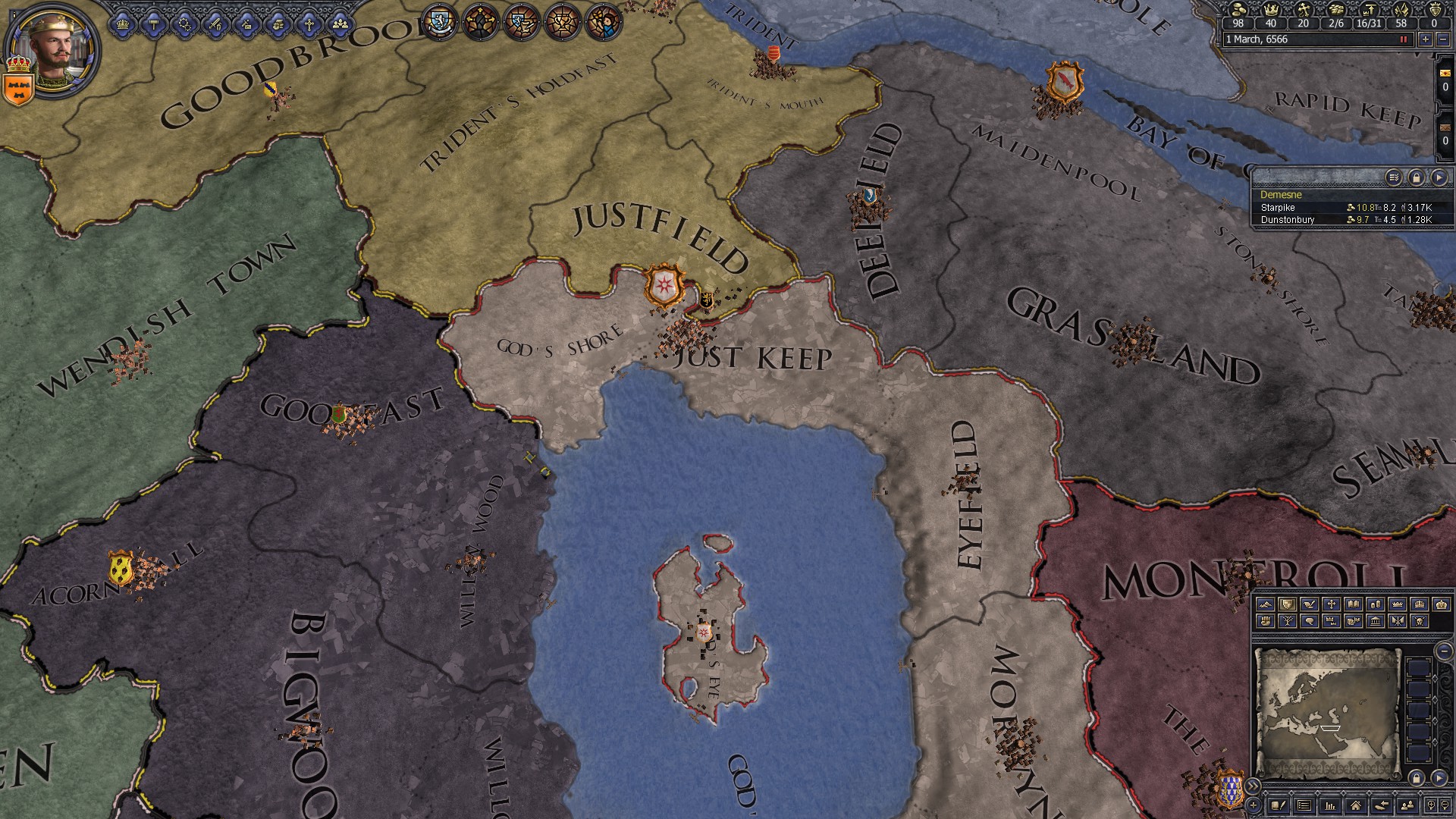 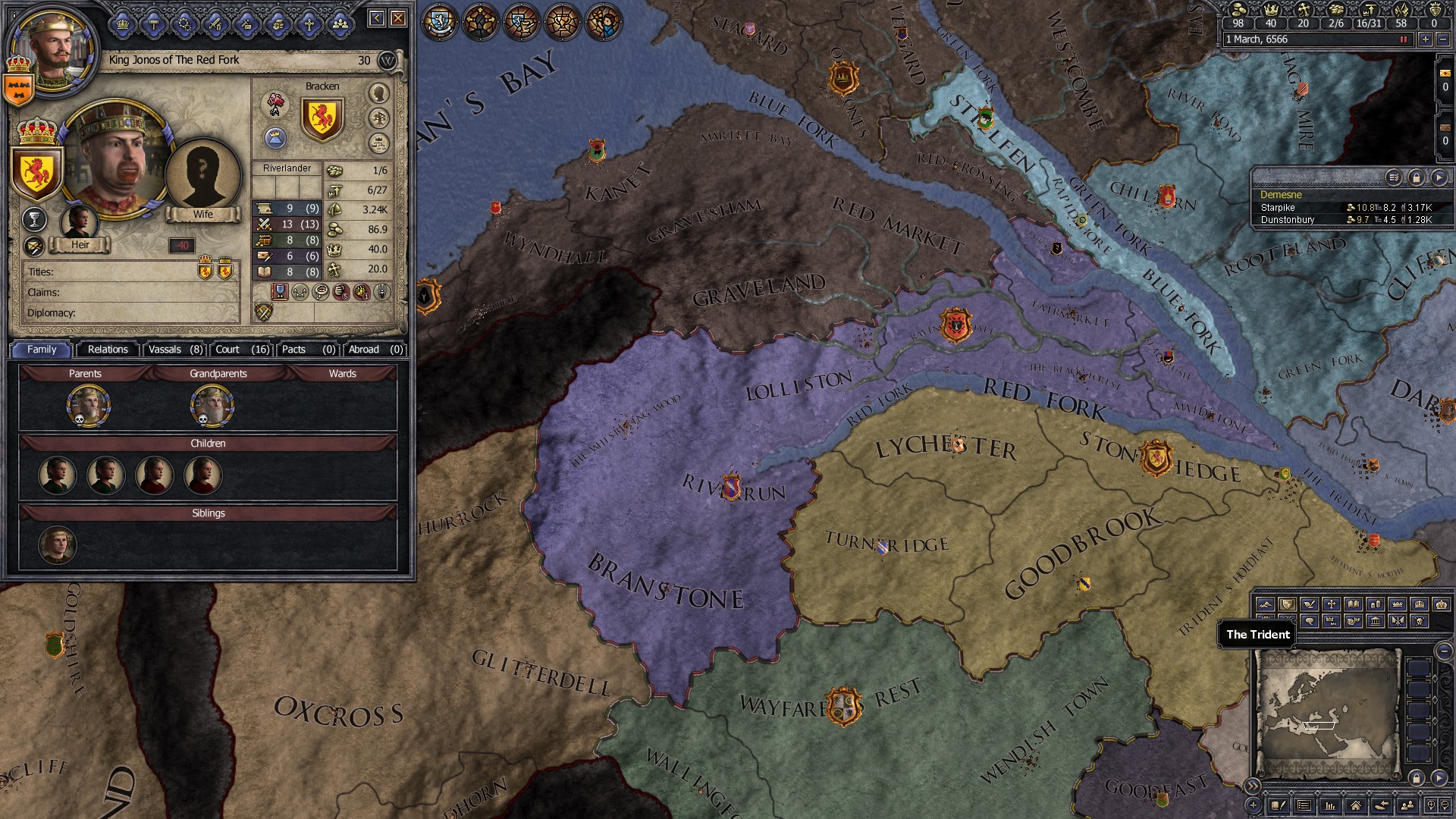 The Kingdom of The Red Fork 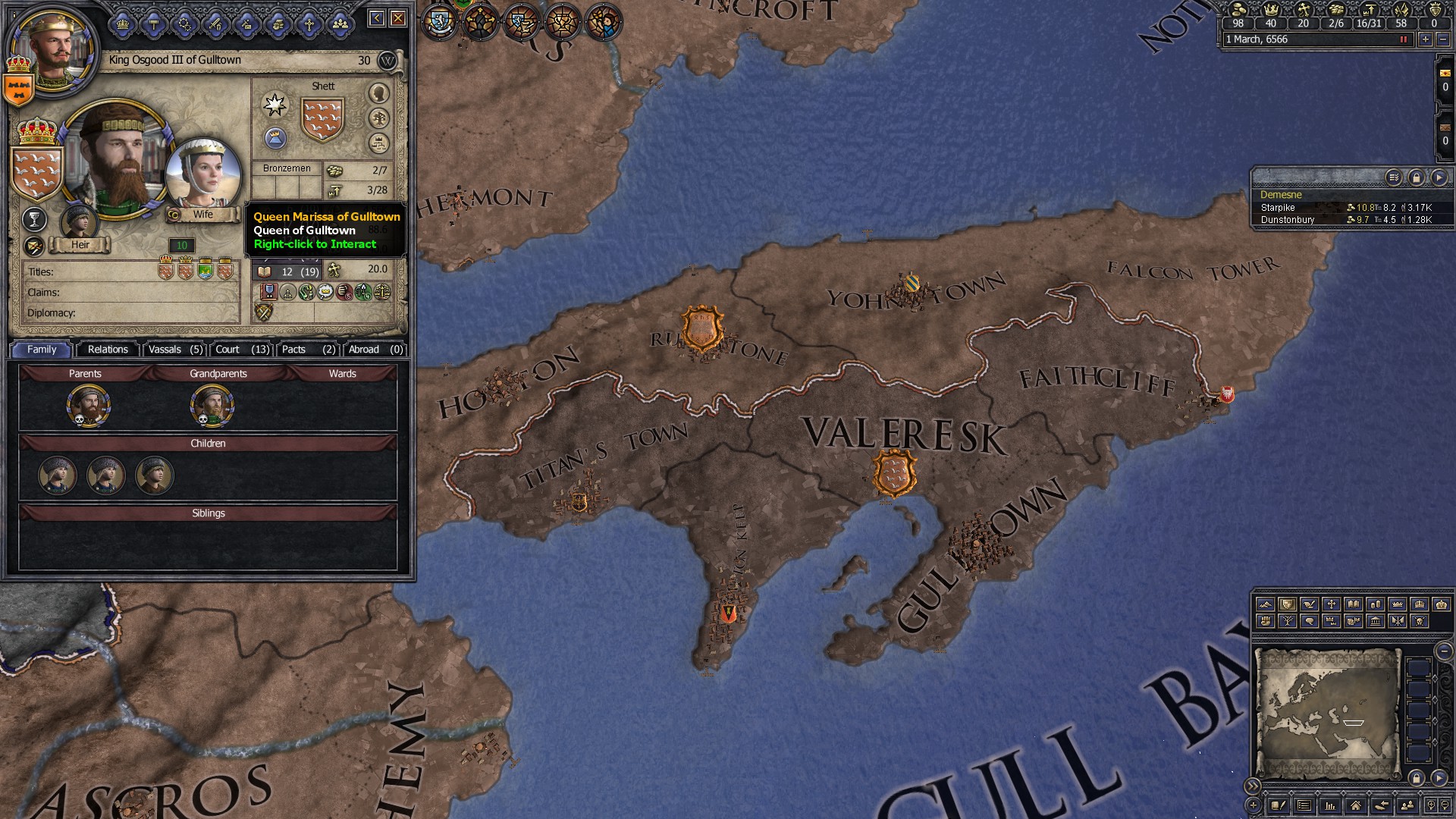 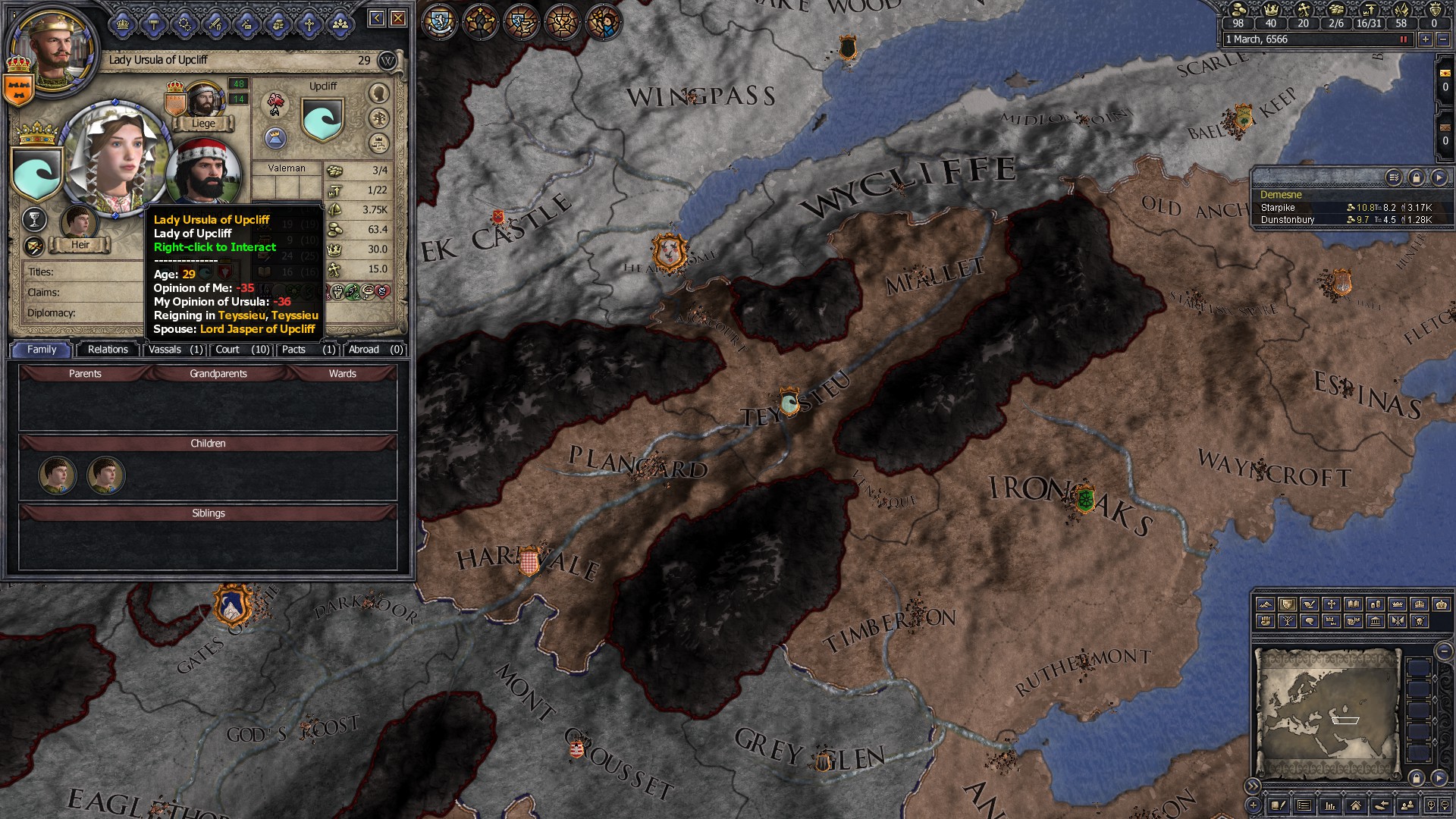 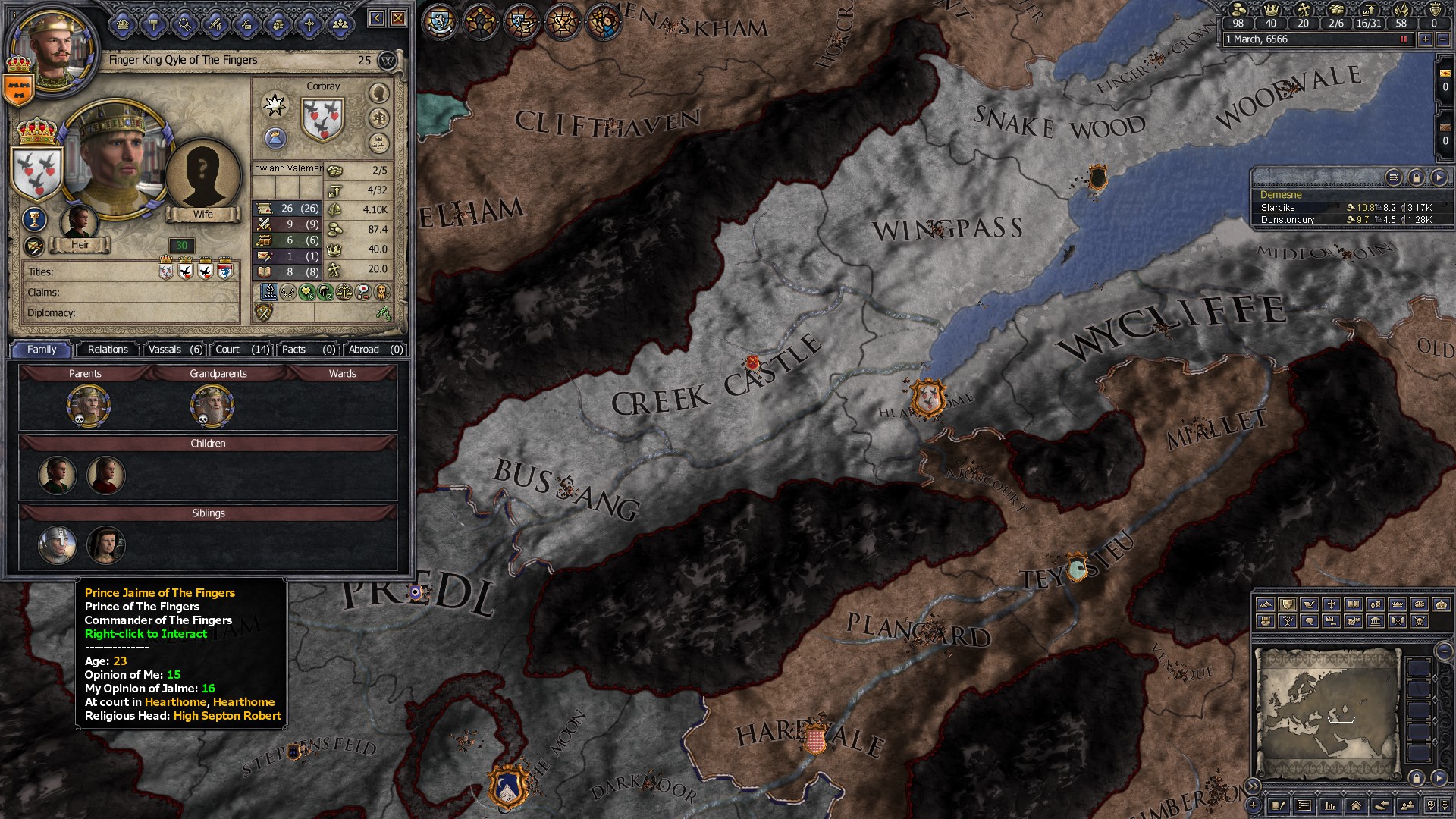 King Qyle Corbray of The Fingers 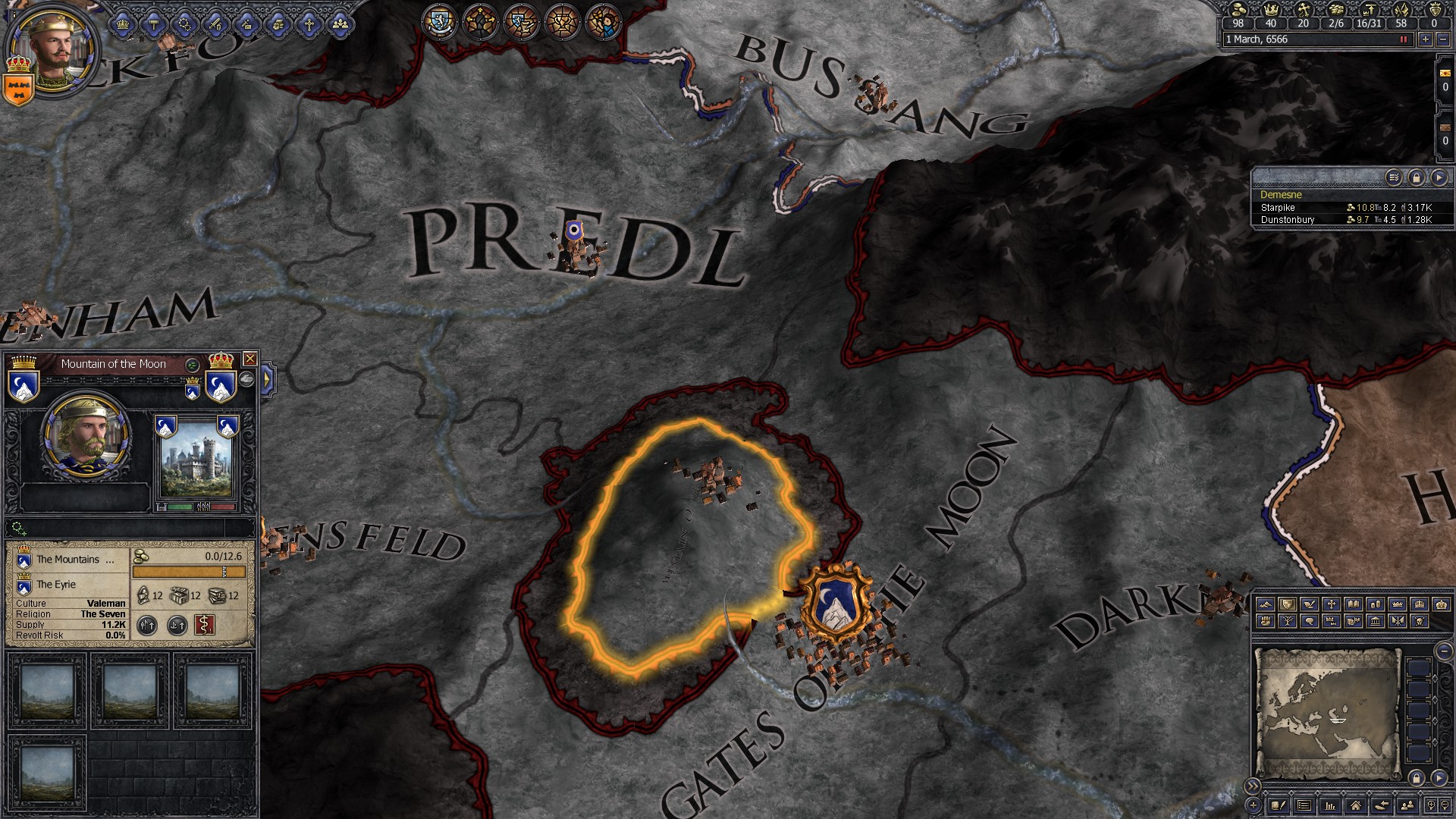 New Mountain of The Moon Layout 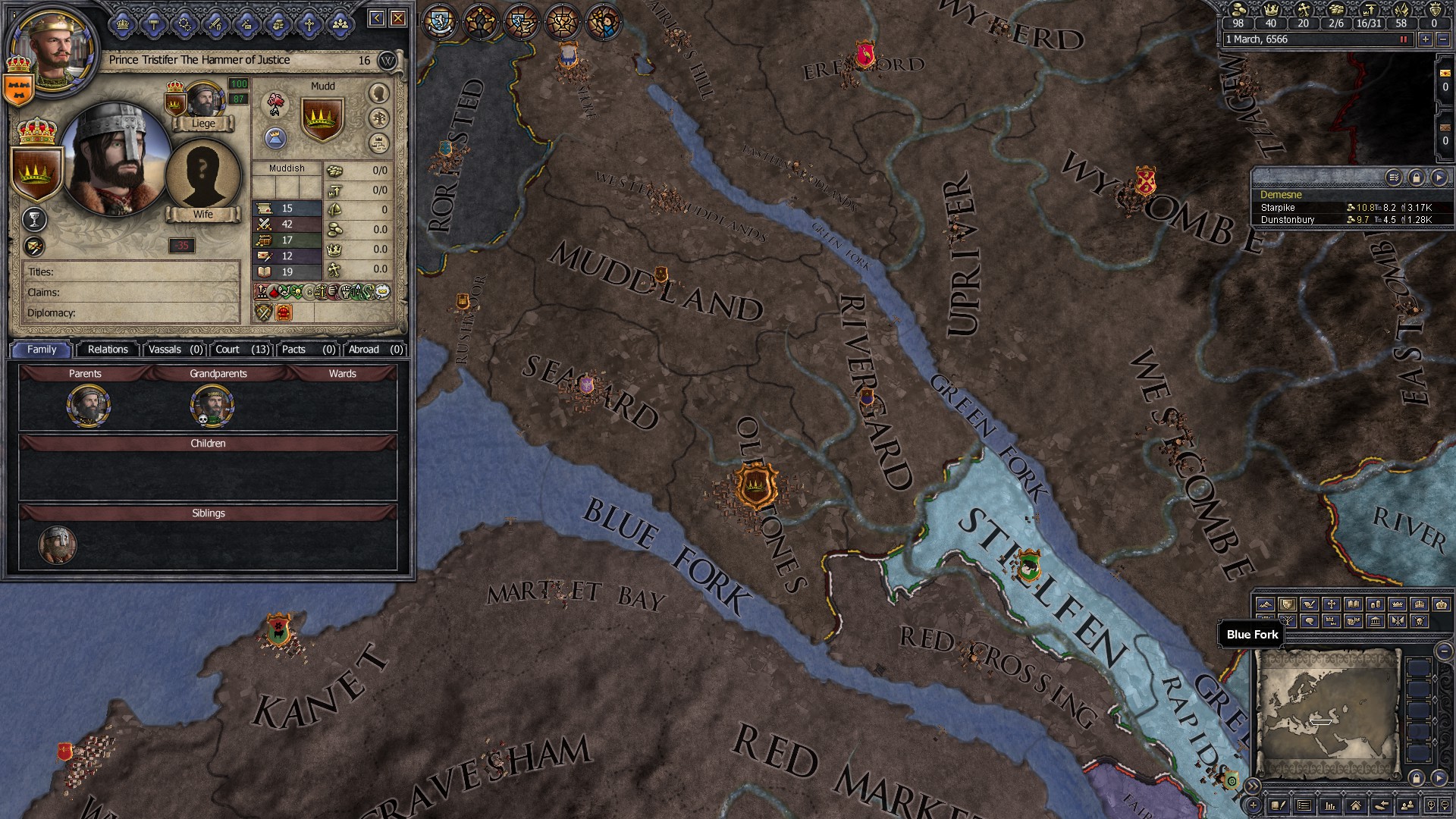 New Portrait for 'The Hammer' 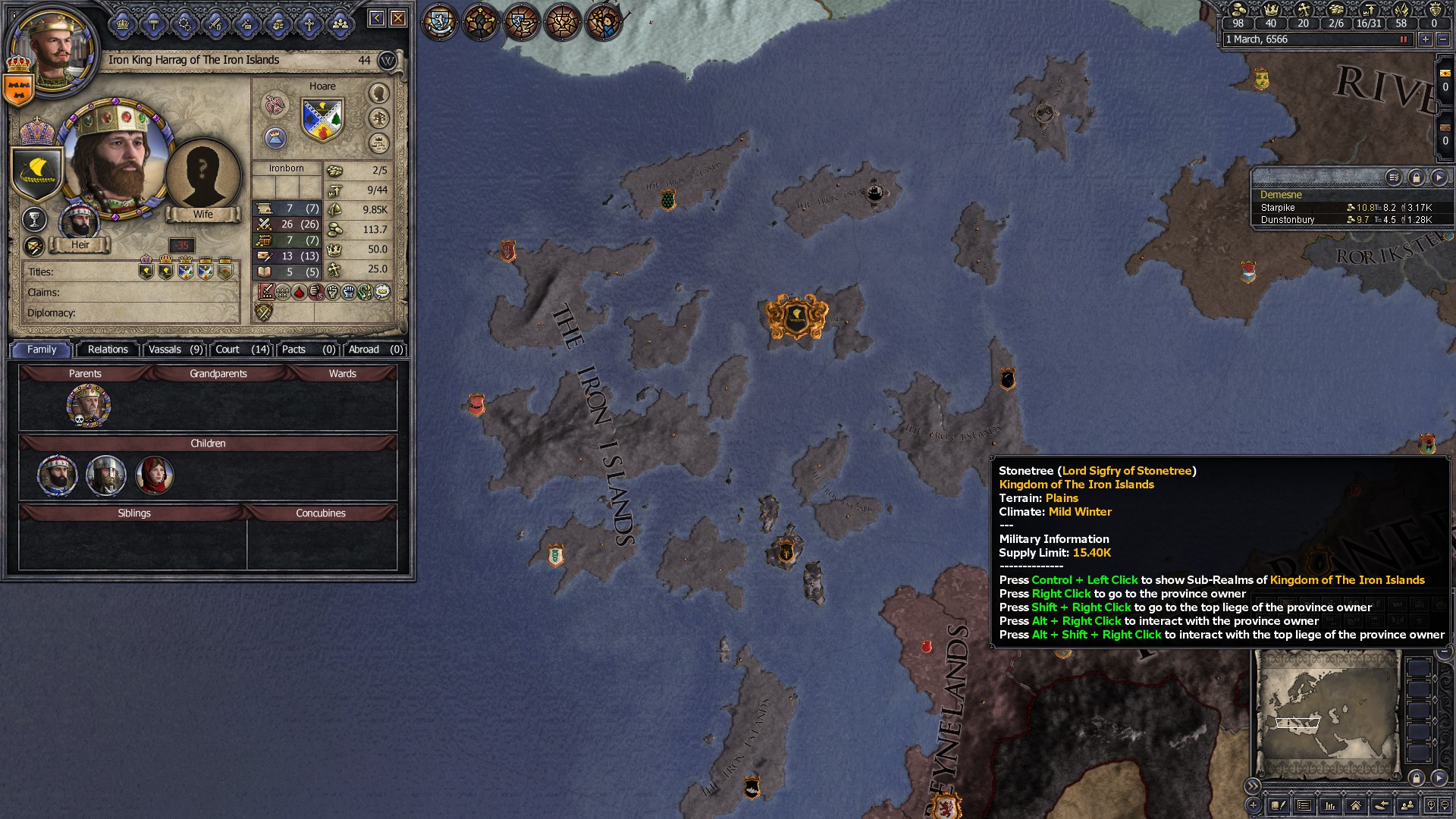 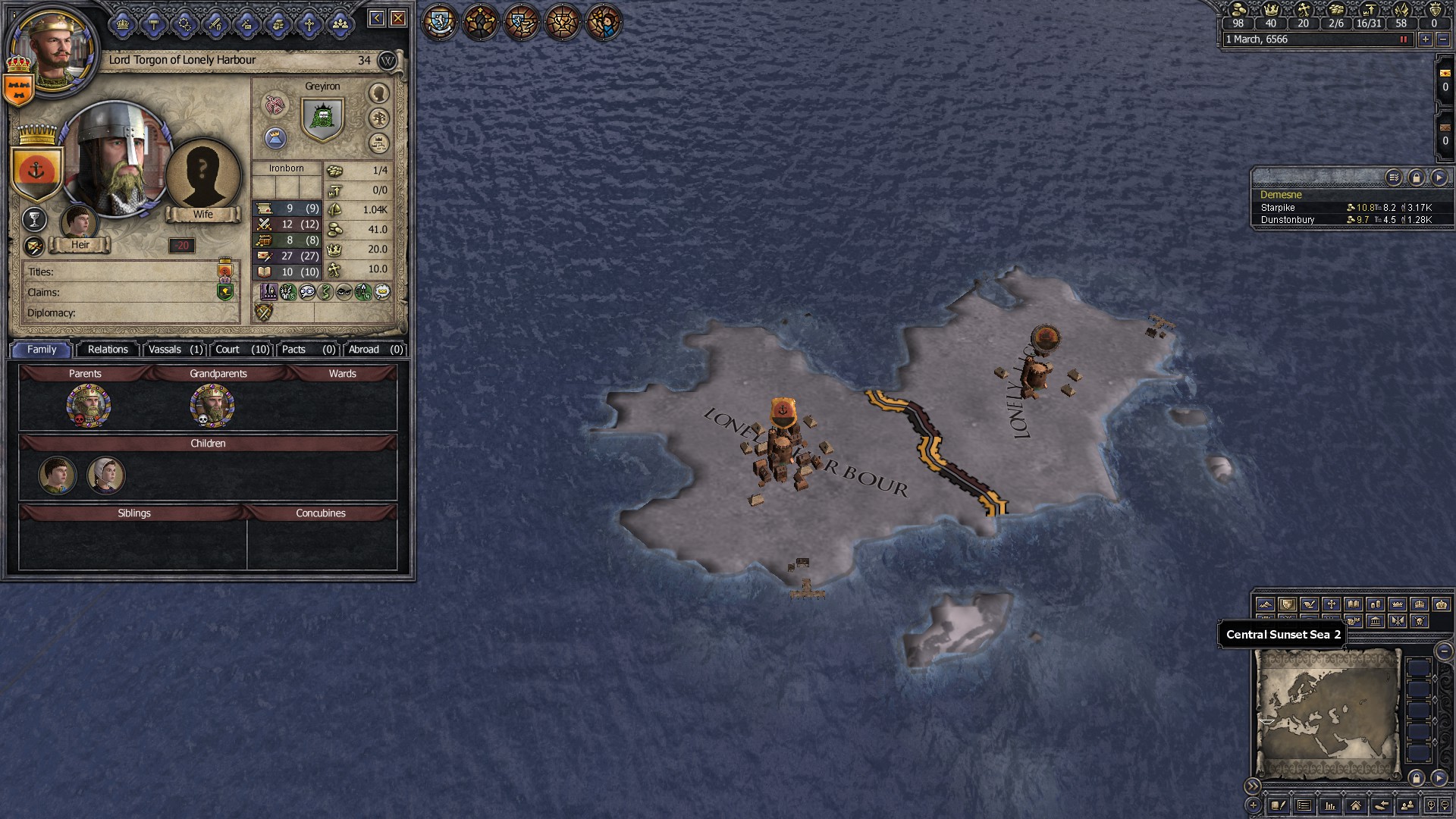 Yes, you can play as the Greyirons 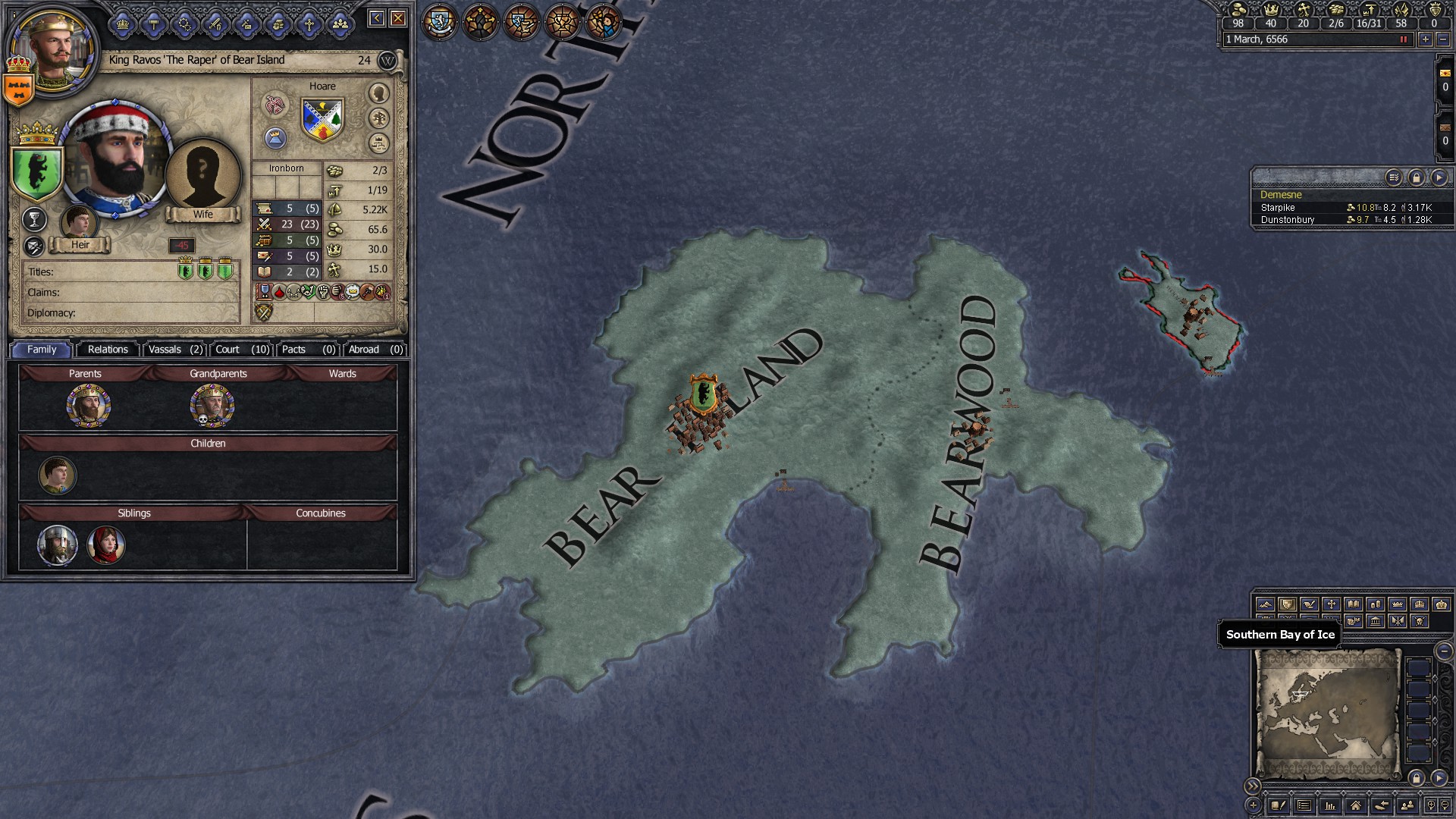 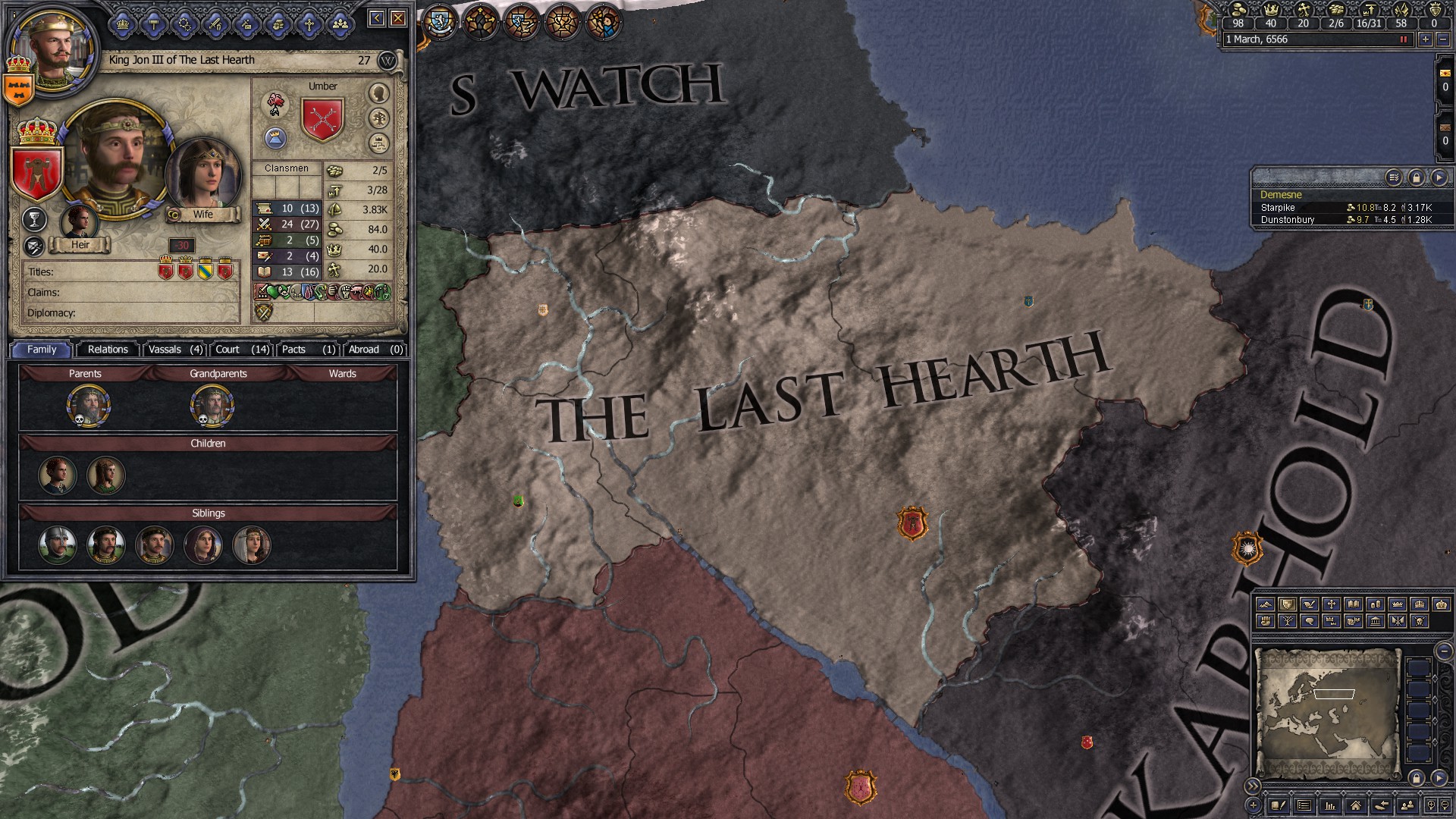 The Kingdom of The Last Hearth 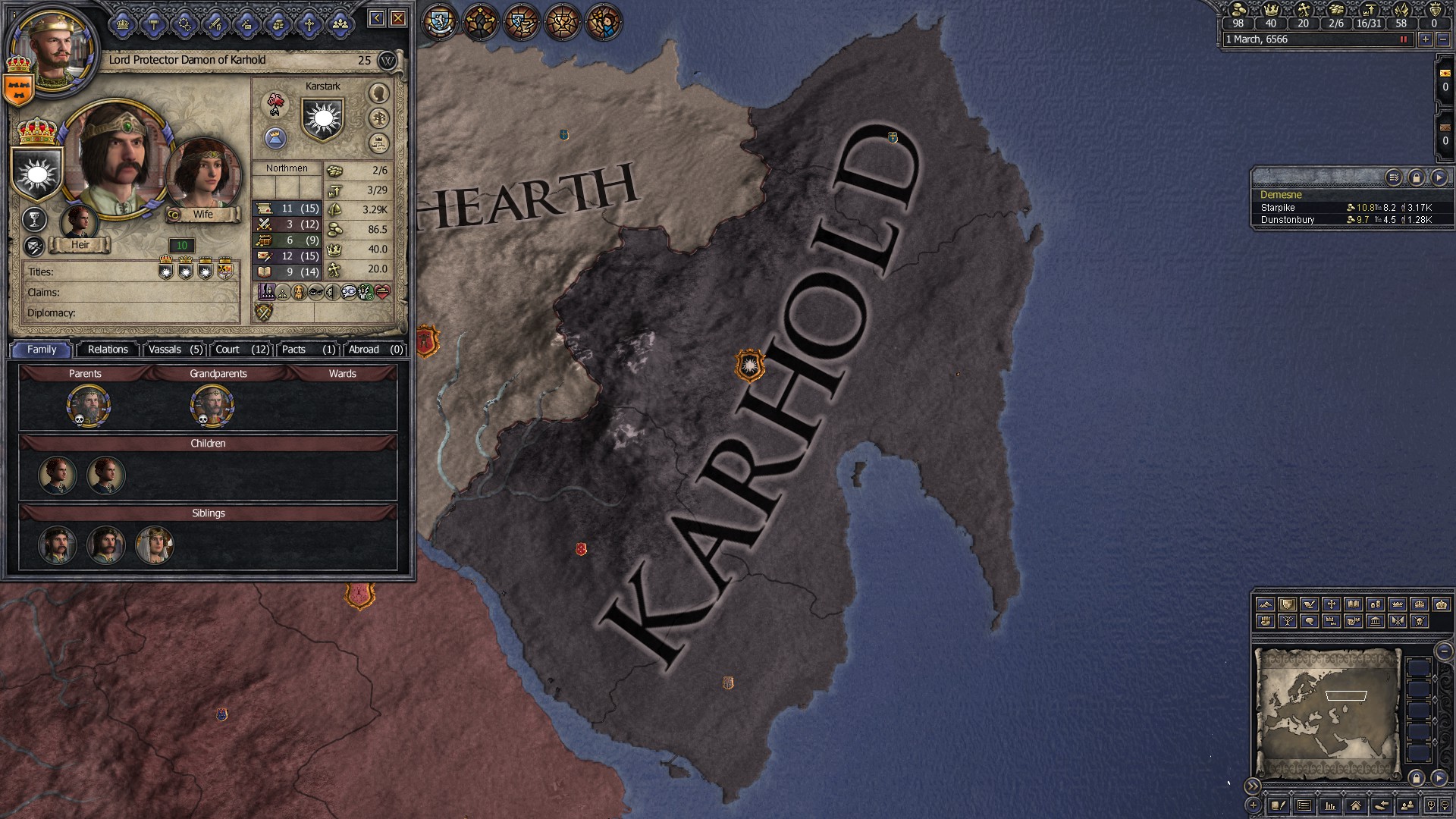 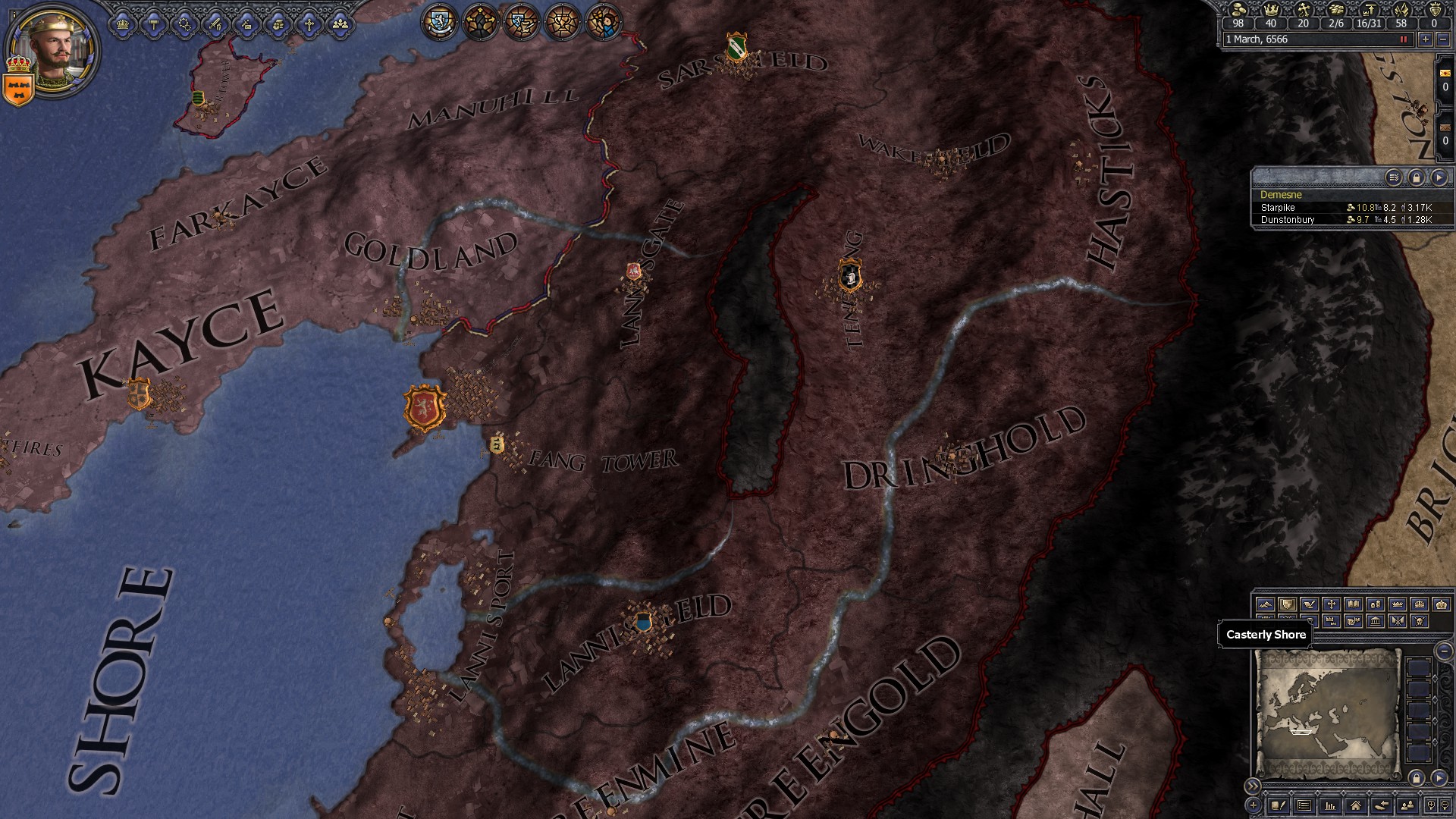 Crimson red for the Rock

This is only a taste of what we have added.

As always if you have any questions, please feel free to ask.