details the events of the original game so audiences know where they are tuning in from. 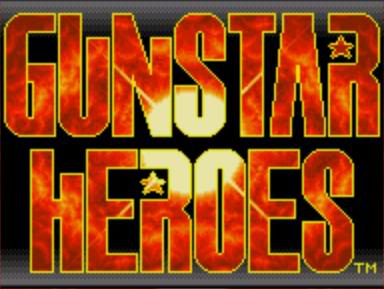 Gunstar Heroes was a sidescrolling platform shooter released by Treasure for the Sega MegaDrive in 1993, the game itself was one of the last games to be released for its consol, and thus didnt get the fanbase it so desperatley deserved. The game pushed what was believed the Sega Megadrives limit to all new hights, the amount of sprites on the screen moving exploding shooting throwing etc had not been witnessed before, and is still in a league of its own as far as platforming sprite action gameplay goes.

The game encompased a very minimal story which is as follows.

All the Main Characters good or bad are codenamed after colours

The Protagonists are; Red, Blue, Yellow, Green, and Brown/White as the leader

There are 4 gems each infused with 1 power

The Triangle gem is Chaser (power that can track things down)

The Diamond gem is Lightning (electricity and laser)

The Sphere gem is Fire, (Fire)

The Weapon system
for me the weapon system is what made the game such an unstoppable monster.

much like the power gems, there are 4 weapon types,

Damage: low
All other weapons combined with this weapon base, will gain an automatic ability to home in on enemies. This weapon only has a form when it is alone, and normally takes and enhances the form of the coupled weapon.

Damage : medium - low
all weapons combined with this weapon type will gain a massive boost in rate-of-fire.

Damage - Medium - High
All weapons coupled with this weapon type will gain a great boost in speed and the ability to travel through objects and enemies regardless size and shape.

Damage - very high
all weapons coupled with fire gain a huge boost in damage potential, however this normally comes at the cost of range.

probably the best thing about the game, figuring out wich weapon you prefer to play with is simply a matter of choice, Fire + Lightning extreme damage at a cost of range? meaning you have to get in close to do damage, or Chaser + Lightning letting your gun do all the hard work if you just fancy watching everything explode around you, be warned on harder dificulty levels there are s many enemies that this is no longer such a good idea.

there are a total of 14 combinations to chose from, all completely different and make it that much more fun to play!

in the original game Green is being mind controlled by the empire, he is really like Yellow, Red and Blue’s uncle, not there blood uncle but as close as one. he is being made to serve the empire… he has command of a Large Robot Artefact called the Seven Force, which he controls from within.

After a series of long battles Red and Blue succeed in recovering all the power gems, when they return to base however, Professor White has been tied up and Yellow was kidnapped by the Empire.

They set out immediately to rescue their sister, and are forced to give up all the power gems to the Empire leader General Grey in exchange for Yellows Saftey.

He then ascends into space on his giant space mothership to awaken Golden Silver in an atempt to rule the universe.

Professor White makes a small spacecraft and Red and Blue set straight back out into space after General Grey,

useing the guns on the spaceship they fight off the endless hordes of the empire and defeat their uncle Green insde the Giant 7-Force Artefact, land on the spaceship, and continue fight in order to reach the General.

They confront General Grey and the Power Gems he obtained suddenly turn on him, they almost kill him before they float into the containment room where Goldensilver has been stored.

With all 4 Gems in close proximity to the containment chamber the seal is released and Goldensilver awakens, after a fierce battle with Red and Blue, Goldensilver blasts off into space and Red and Blue follow in their spaceship.

Goldensilver makes his way towards earth to suck it of all its energy, General Grey regrets his actions and tries to stop Goldensilver, but the machine simply blows him and his men away leaving them adrift in space, with no other way to stop the God of Ruin, Green, no longer under the emperors control, felt so bad for all the trouble he had caused his family, that he sacrifices himself, ramming the 7-Force into Goldensilver and self destructing, killing them both and saving the universe from destruction.

(Another Idea) - It would be appreciated if you can also include the other Gunstar Heroes game's storyline (not really sure whats the other title though, I've played it on the NDS) :P

the GameBoy Advanced title isnt related to the original, its set far into the future, hence the name "Gunstar Future Heroes" :)

this mod is only based on the 1993 title, so not to confuse matters I wont archive that here.

Thanx a bunch for the info, appreciate alot. :D