Ok, so let's have a look at the game play of Interstellar Marines, what sets this game apart from all the other great games out there? 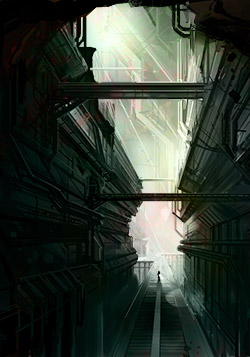 Well, Interstellar Marines is at the core a Sci-fi First Person Shooter (FPS).

Now that's not really anything special to say the least, however there is a bit more to it than that. When we as developers (and not to forget gamers) began to create a new FPS game, a main motivation was that even though lots of great games came out, we always seemed to miss something.

One game would have a great open ended world while another featured a cool skill system, one game offered intense combat while in yet another you got the chance to play cooperatively. However we wanted to bring all the features we as gamers enjoyed the most together in one great FPS game.

Ambitious? - hell yeah, but on the other hand you could also just look at it as evolution of the genre. Not really any point in (re-) creating what has already been successfully made by others, and as mentioned, we saw an empty space in the selection of available games still waiting to be filled.

So off we went starting filling that gap with what will eventually become Interstellar Marines, and here are some of the key features we have focused on:

Playing a pre-made character in a game can be great fun, but when designing Interstellar Marines it was pretty clear that we wanted more than that, we wanted to give players the freedom to shape and mold their character themselves.

In the game the characters will enter the solar system as rookies, but during the progression of the game all gradually become more and more experienced as the story unfolds. With experience comes new skills and abilities as well as access to new and better weaponry, and it is now all up to each player how they want to build and equip their Marine.

Create a stealthy medic with hacking skills, a heavy armored sniper with explosives or maybe an officer with excellent strategic abilities and a minigun?

It is all up to the player to decide.

Just like the character is growing and taking shape by gaining skills during the course of the game, so are the weapons of the marine. In a somewhat similar way to traditional RPG character progression we also wanted the players to be able to "personalize" their weaponry and equipment.

As an Interstellar Marine moves up in rank, he gets to choose more and more weapons and weapon utilities from the vast armory of the IM corps and is now able to freely customize his guns and items. If you pick an assault rifle you could choose to improve it with the shotgun extension and hollow point bullets or perhaps a silencer, piercing rounds and a scope?

The options are plentiful and it is all up to each player to freely make the decisions that suit his or hers preferred play style.

What is more fun than playing through a stunning adrenaline-filled game that completely blows you away? Doing so with your friends!

In Interstellar Marines you will have the option of teaming up with up to three of your friends and play through the game in co-operative mode (co-op). From the very beginning of designing this game, we knew we wanted co-op to be a core element and because of that we have shaped all of the other features to enhance the co-operative game play.

The skill system will give players a vast number of options for all kinds of team play and all of the levels of IM has been designed with the clear focus of supporting co-op game play. Even the story line is written with multiple protagonists in focus so that all players in a group will have their unique place and doing in the upcoming epic saga.

Of course there is always the option of playing on your own, but should you choose to invite some friends to a game (or find some new ones on-line) a whole new challenge awaits you and your band of elite soldiers

When we were to create the world of the Interstellar Marines, plenty of ideas came up for great locations and places for the players to explore. However no matter where the story would take the marines, we were pretty sure about one thing; the places should all be open ended and not in any way force the players to just take a pre-chosen path through.

So we constructed the game in such a way that there are always several ways to achieve the main objectives/complete the levels and players will have the option of using brute force, stealth tactics and/or make use of the various skills as a mean to successfully clear a mission.

However not only should players be able to explore the areas of the game freely, we also wished for the levels to be as dynamic as possible, so that the game would stay fresh and exciting even when you came back for the fifth or sixth time. The cool thing about a dynamic environment is that it allows for tactical choices, and the player should consider the effects of shutting down the lights, turning on the sprinklers and how the enemy AI will react to such changes in the environment.

To add to the re-playability all levels are non-scripted and the various “inhabitants” of a location will have a life of their own (guards patrolling, scientists working, crew personnel cleaning, etc) until the players intervene one way or the other, so there are no monsters jumping out of the closet when players step on that exact trigger on the floor.

That sounds very nice, and I mean everything! I would have loved to see some trailers for that though....

Sounds fantastic. Continue the great job and i'm happy you guys decided to follow my advice. ;)

Good to see your guys faces around here. Happy that you guys are spreading the word around so keep up the great work and keep working on that multiplayer 'slice' of goodness :)