We go through all the Republic soldiers you`ll get to play as in : Valley of Ruins.

-- >> NOTE: This article is outdated. Some units have undergone many changes since the creation of this article and therefore some of the information in here is no longer accurate << -- 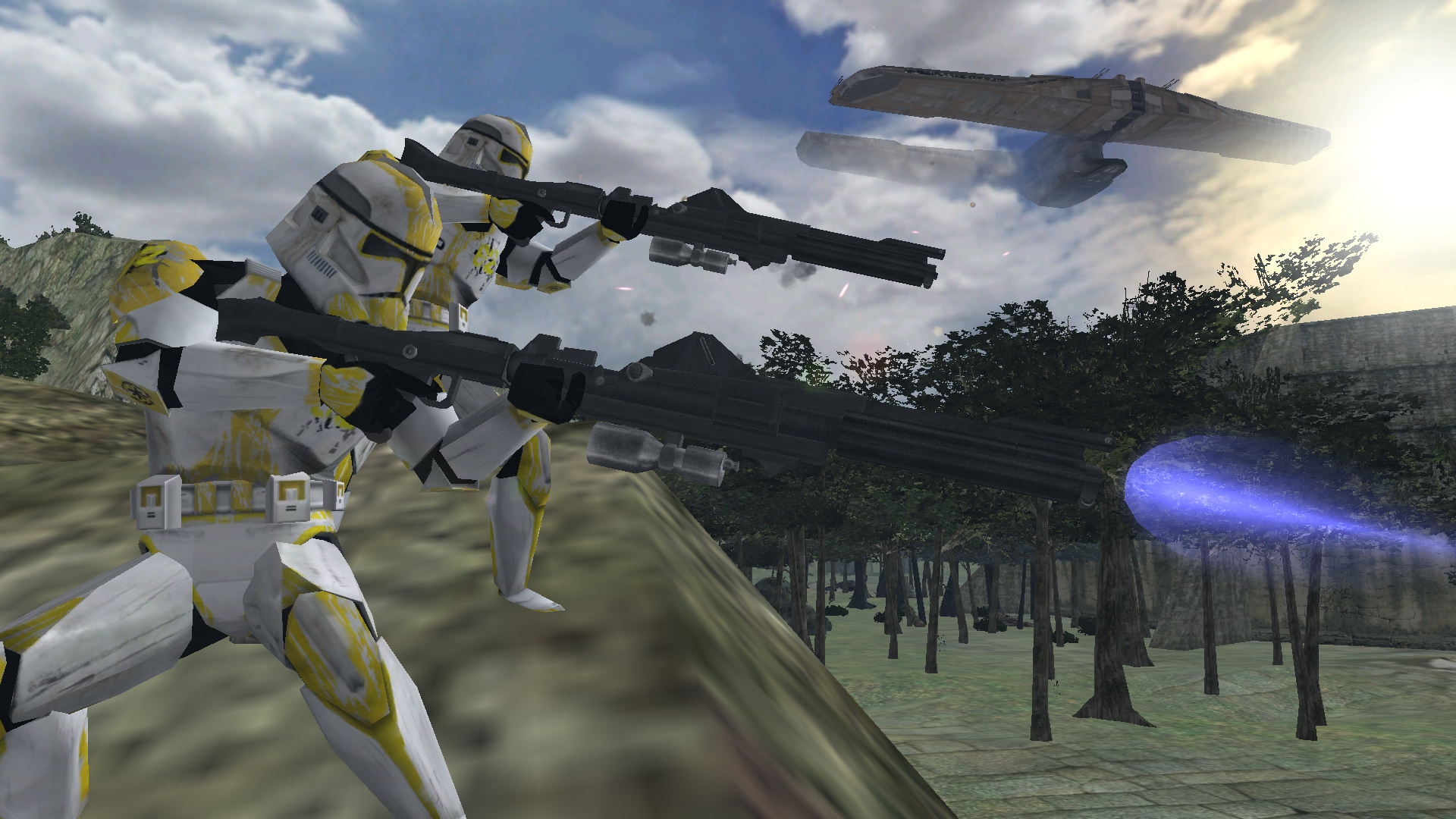 The 62nd Clone troopers make up most of the 62nd forces and won`t go down easily without a fight. They`re equipped with a DC-15 Blaster Rifle, DC-15 Blaster Pistol as well as 4 thermal detonators and 2 Sonic grenades. 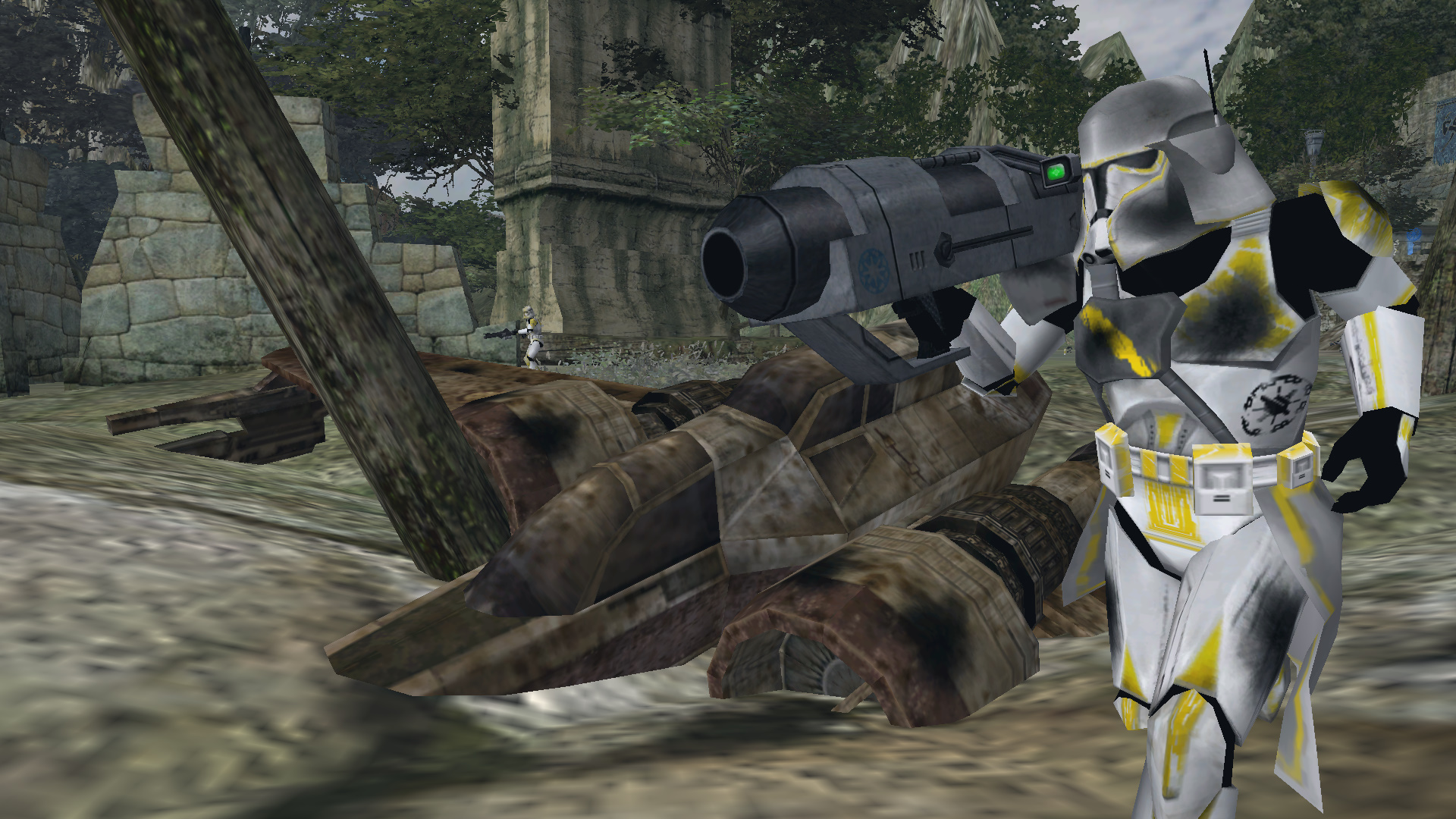 The 62nd Demolitions Expert is the guy who deals with all your problems, in the most explosive way possible. They focus on dealing with taking out vehicles and do so with extreme prejudice. They`re equipped with a standard issue Republic Rocket Launcher, DC-15 Blaster Pistol, 2 thermal detonators, 2 mines, 2 detpacks and 1 Heavy time bomb. These guys will take care of any vehicles problems you might have. 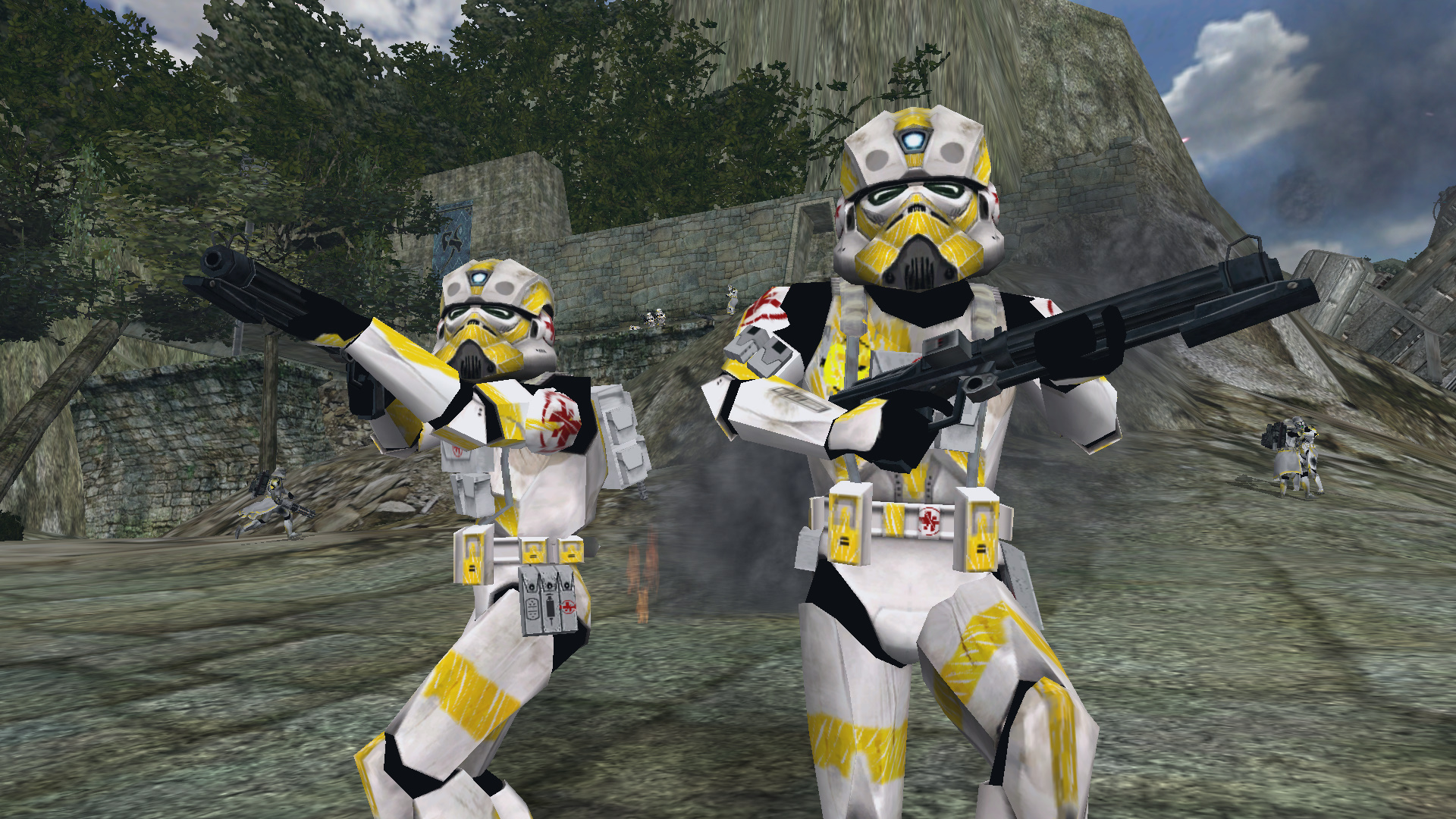 The 62nd Clone Medic is a life saver on the battlefield. Just when you think its the end of the road for you, there he`ll be, like an angel, armed with a medkit just for you. He keeps the 62nd fighting. They`re equipped with a DC-15 Blaster Carbine, DC-15 Blaster Pistol, Fusion Cutter, 2 thermal detonators, defence buff power up and 5 med kits. 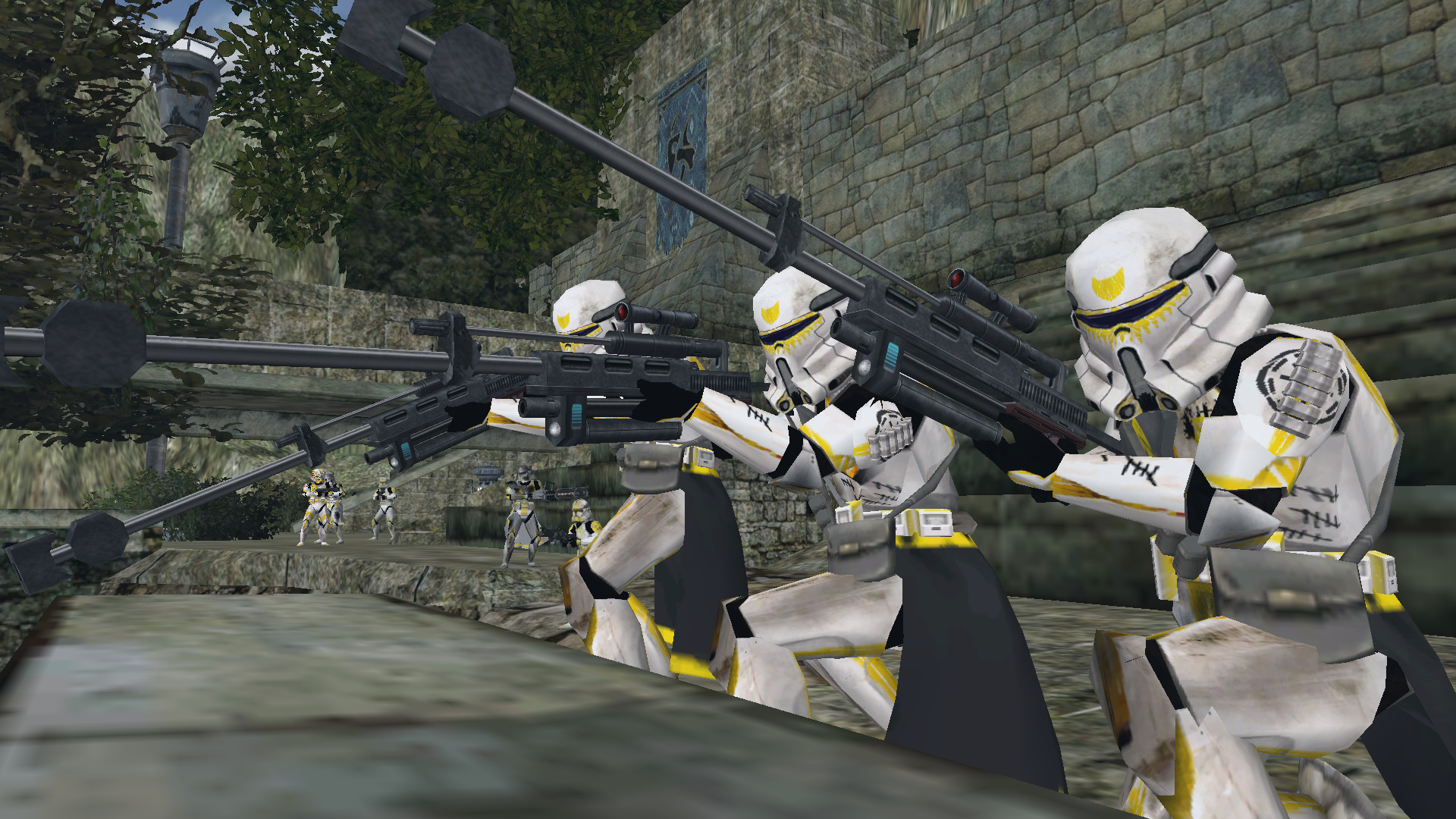 The 62nd Clone Recon Trooper is the marksman of the 62nd Legion. Most can`t find a needle in a haystack but these guys will not only find it, but call in to HQ and report it`s location, stalk it for a while and then shoot it`s head clean off. All 62nd Clones feel 10 times safer when they know one of these guys is looking out for them. Thy`re equipped with an advanced "Hyper Sniper" as they`ve come to be called, a DC-15 Blaster Pistol, 2 thermal detonators and a remote droid. 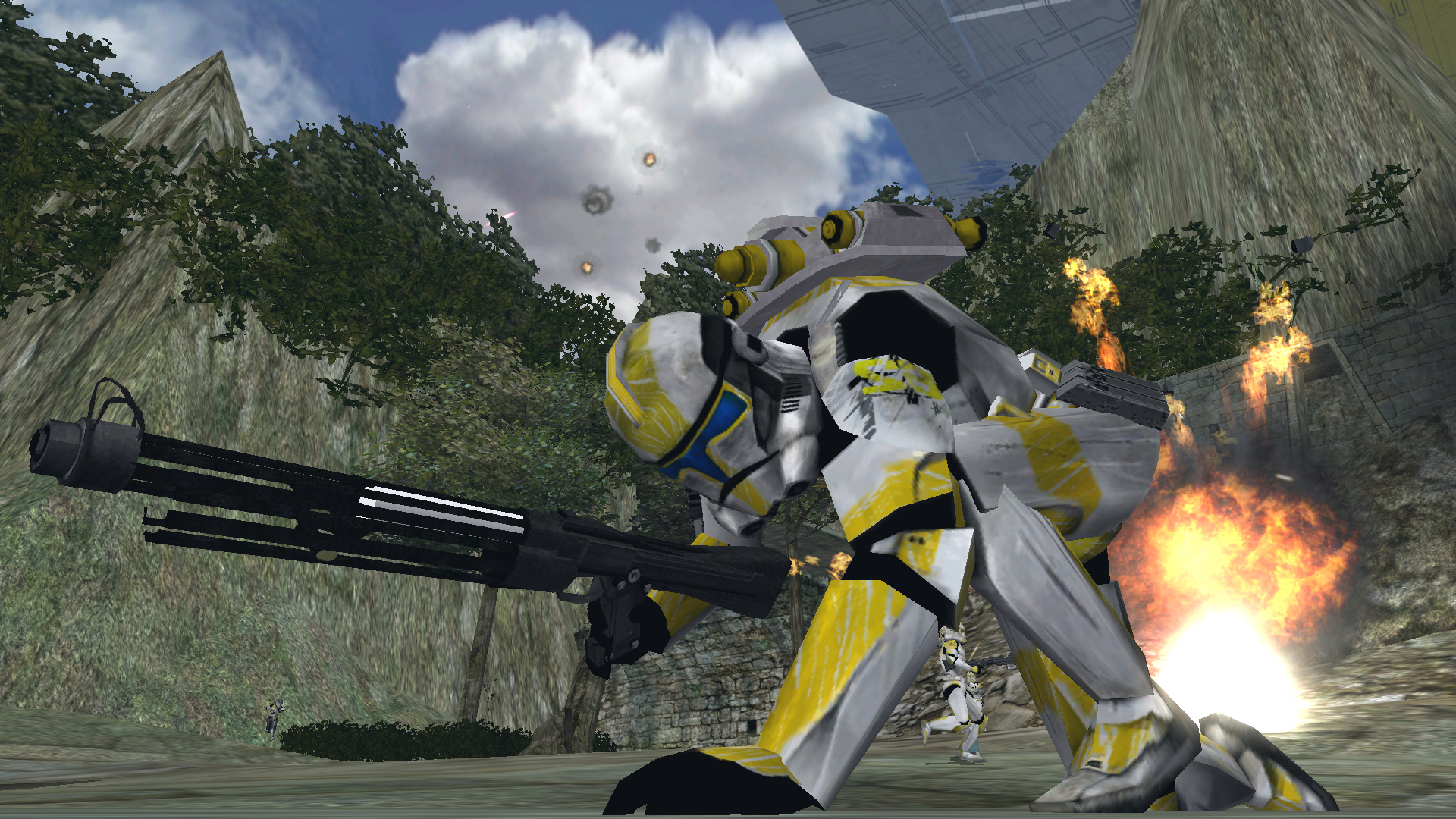 The 62nd Clone Infiltrator is mainly used to infiltrate enemy bases and excels in close quarters combat. They`re equipped with a modified DC-15 Shotgun, Commando Pistol, 2 thermal detonators, 2 det packs, 1 auto turret which the 62nd like to call all auto turrets "BOB" as well as a modified recon droid rigged with explosives and will detonate upon impact. They are also equipped with a jet pack for quickly breaking into buildings and then using their shotgun to take out all enemy forces. They`ll get the job done. 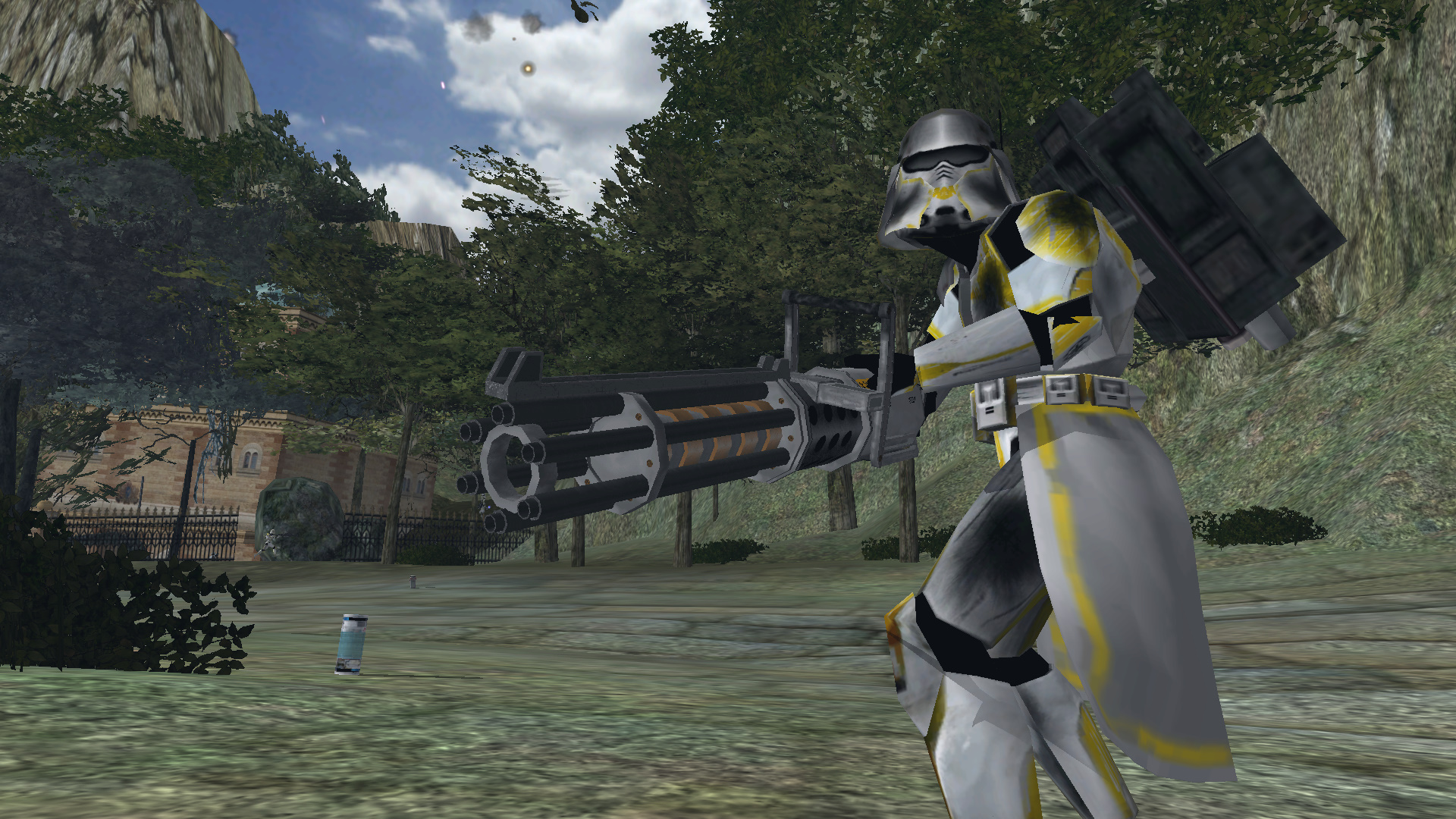 The 62nd Heavy Weapon Specialist is the bulky, badass clone trooper of the 62nd Legion. These guys will absolutely decimate anything and everything in their path. Equipped with a Z6-Heavy Chaingun, 3 thermal detonators, 3 detpacks, 2 heavy time bombs, a deployable turret and some strong as reinforced armour, these guys can certainly take a beating and not care less. 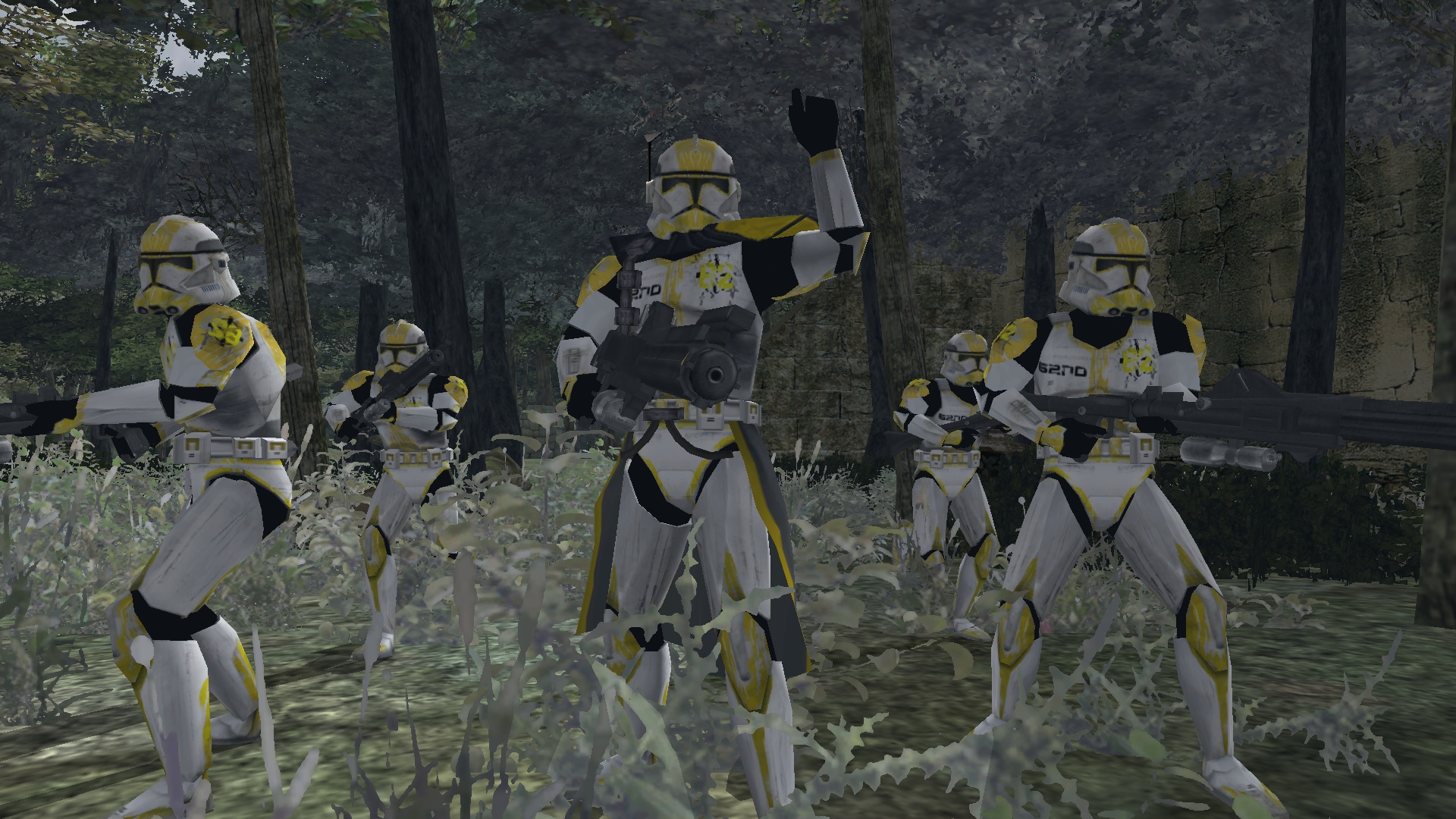 Otherwise known as the 62nd Squad Captain, the 62nd Captain is the rank given to clones of the 62nd Legion who have proved they have efficient leadership and combat skills on the field. They are placed on the battlefront to help command the soldiers on the ground and give orders. The antenna on their helmet is used to receive orders from Commander Needo from any distance, which they then notify all troops around them. 62nd Captains are equipped with a standard issue DC-15 Blaster Rifle, DC-15 Blaster Pistol, 5 Thermal Detonators, 3 Haywire detonators (EMP grenades), 2 MedKits and a damage buff to give to their squads of around 4 and/or any troops around them. They are noticeable on the field by their yellow pauldron and 62nd themed cape. If you want to stay alive out there, you better listen to whatever they say. 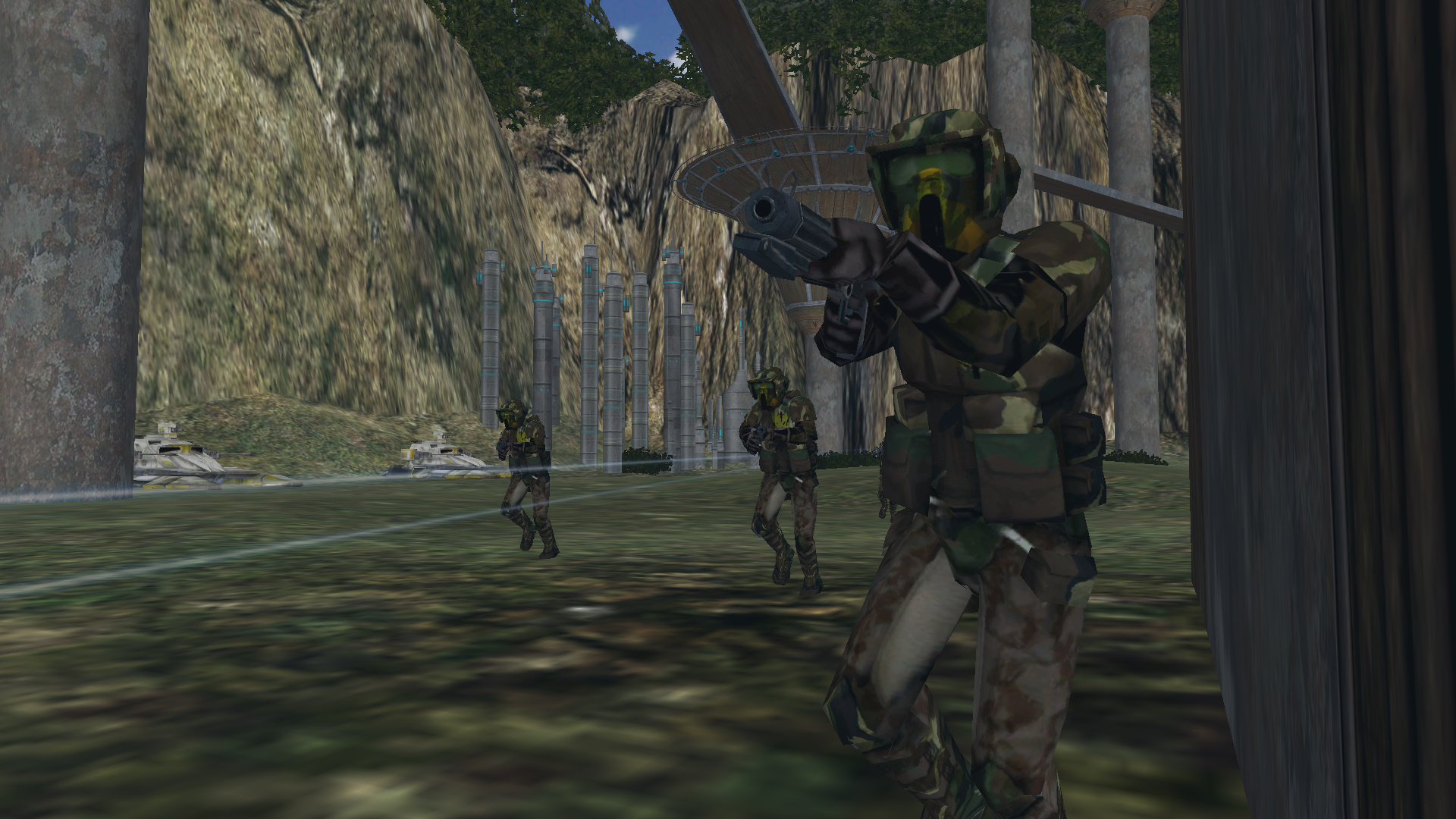 Part of the 62nd Scout Regiment led by Captain Moss, 62nd Scouts are trained in almost all areas of combat. Equipped with a DC-15 Blaster Carbine, "Hyper Sniper", 4 thermal detonators and 2 med kits, these guys are well equipped to take on any challenge. 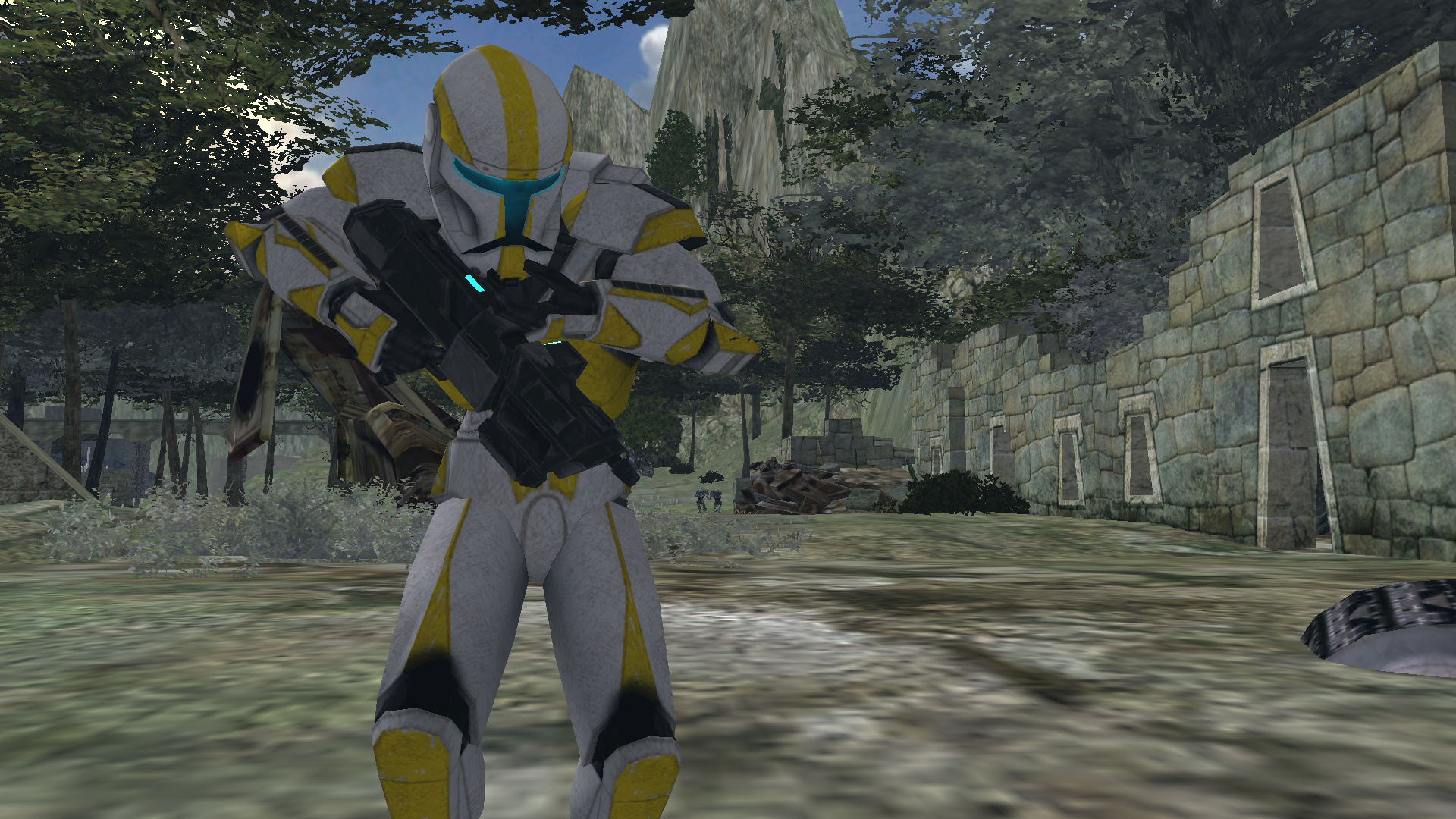 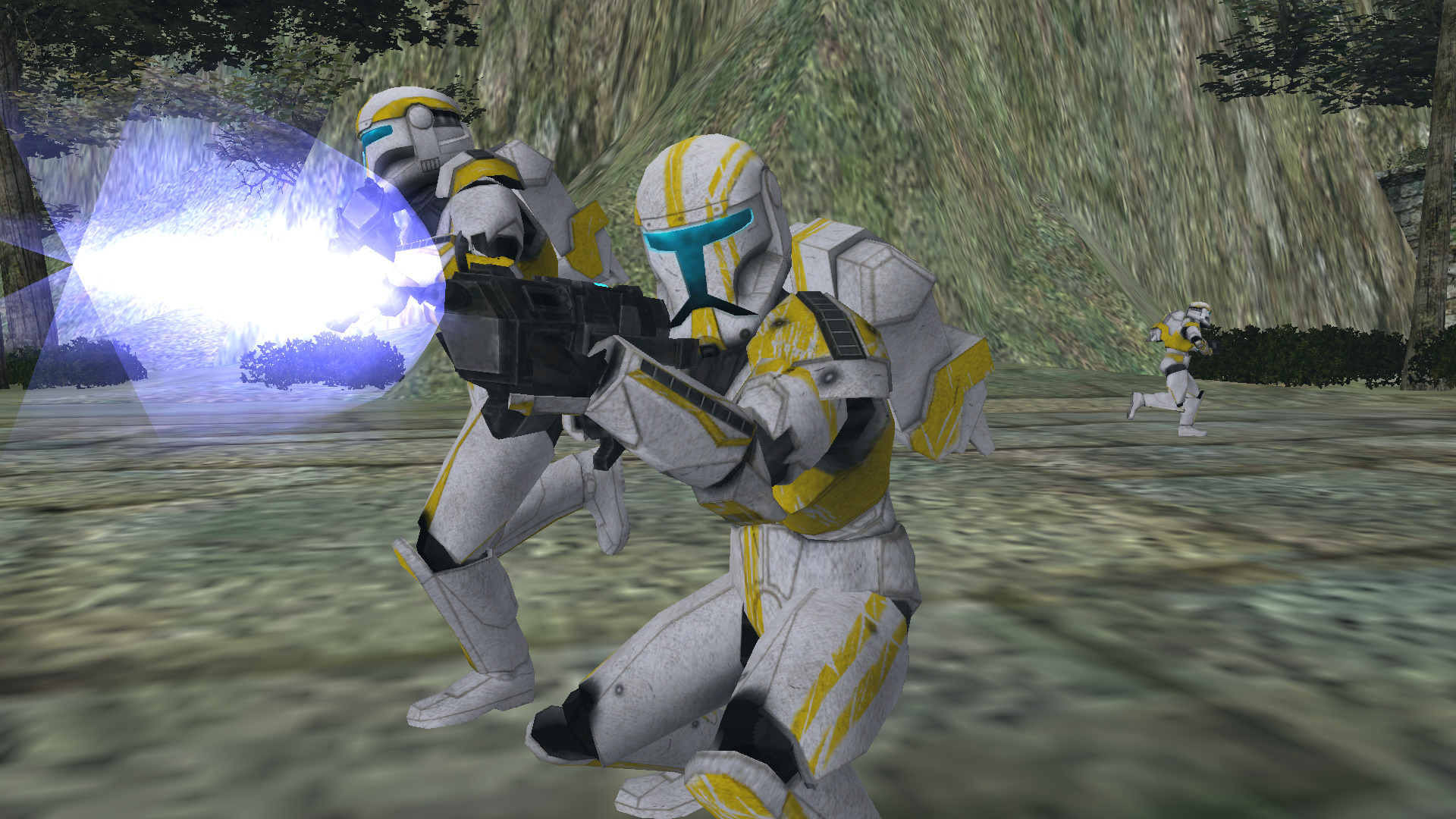 62nd Republic Commando`s are only sent when nothing else will do. They are equipped with a standard issue DC-17 Blaster Rifle, DC-15 Blaster Pistol, 4 thermal detonators, 4 Sonic grenades and 4 haywire detonators (EMP grenades), they are well equipped to deal with all your problems. They are the favoured guard/badass that Commander Needo takes with him on dangerous missions. They consist of 2 main ranks: Private and Captain. The Privates are the more rookie commandos and the Captains are a hell of a lot more battle hardened. You can distinguish the 2 by their armour. Privates have simple markings and almost new looking paint, while Captains have scratches and blast marks all over their armour as well as a telltale double line going down the right side of their helmets. 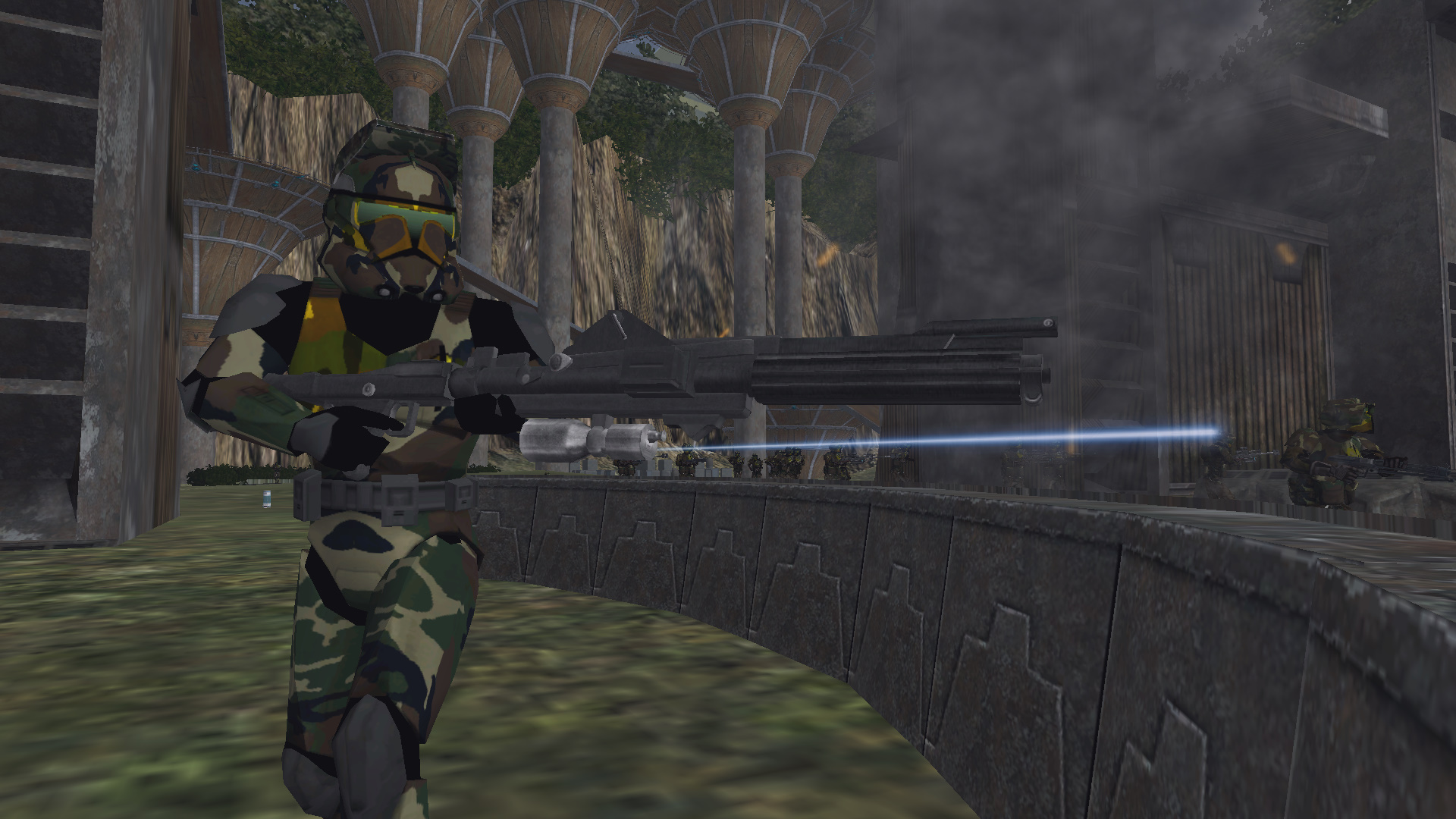 Captain Moss is the leader of the 62nd Scout Regiment and does his best to keep the moral of his troopers up at all times. He`s known for cracking jokes at anything and his regiment always laughs at them. His regiment have great respect for him and will serve under his command until the end. Moss is equipped with an advanced DC-15 Blaster Rifle which he has modified to fire in 3 round bursts (A trick he learned off Commander Needo), a "Hyper Sniper", 4 thermal detonators, 2 med kits, 2 "BOB"`s (autoturrets) and has special stealth class armour that can go invisible for a short time. He`s one if the more unique leaders in the 62nd. 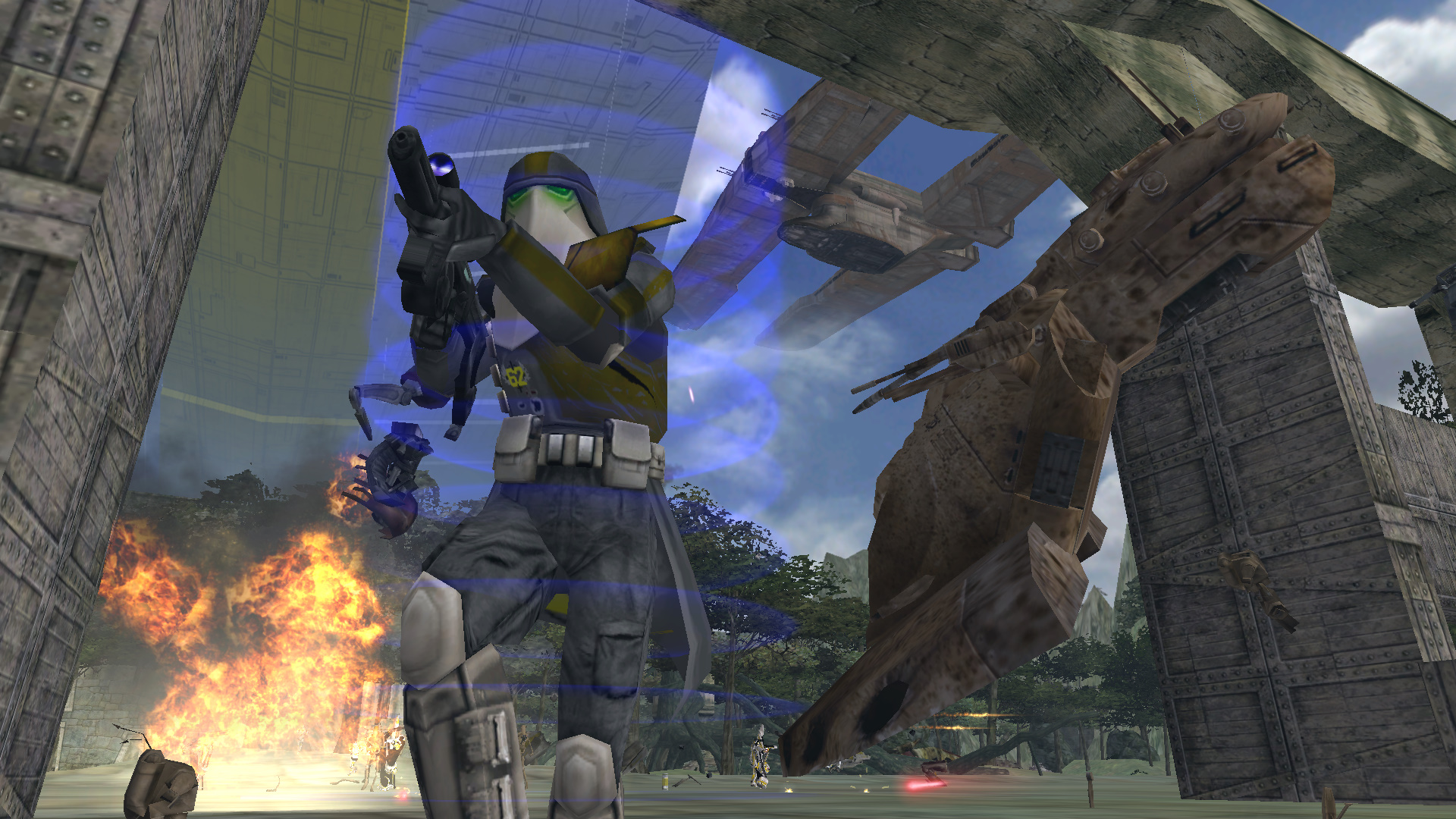 Well that concludes all the troops you`ll get to play as in : Valley Ruins. Of course this isn`t canon and was just for some fun. I figured it would make this mod a bit more unique. Make sure to tell me your thoughts by leaving a comment!

It looks pretty cool, can't wait to see the CIS side as well ;)

As for a suggestion, you should give more health to the Heavy Weapon Specialist than basic soldiers, in order to balance that point, make his movments slower.
It's an Interesting trick ;)

Ya know I've already done that! It is a good trick. I've been altering the health of lots of troops. And thanks for the feedback!The CIS isn't as good becuase the idea is you play as the Republic but I sure as hell haven't left them the same!

This Mod is gunna be a good one. Keep up the good work !!

Yknow, it looks good, but i think tons of people are gonna be scared off by the big giant 62 on their shoulder (that was quite obviously made in the Battlefield 4 emblem creator) and overuse of the word "badass". Just sayin.

Wellllll, maybe the word "Badass" has been a LITTLE overused here haha.
AND O MER GURD YOU FIGURED OUT HOW THE EMBLEM WAS MADE!!!
But I`m not going to change the "62" on their shoulder, I for one like it, and this is my legion so yeah. But thanks for the feedback bro!

can't wait for this mod!

"He`s known for cracking jokes at anything and his regiment always laughs at them." So Delta 62 but he owns a legion? Neat-o. Now from what I see this looks amazing. Part of me does want to see a campaign of sorts for the 62nd (kinda like the 602nd campaign or the Battles of the Storm mod). A suggestion for the campaign would be that it would probably span from EP2 to EP6 (which is a HUGE stretch but I'm a big dreamer) and maybe seeing the Yavin Scouts break away from the 62nd before Order 66 and we can either play as the 62nd or the Yavin Scouts and have them fight against each other. I probably sound crazy but I do get carried away when I talk about mods with potential for great things.

Hehe. And YEEES I so want to make a campaign for it, I have soo many ideas. But campaign scripting is hard so I can`t do any of that at the moment

I'm literally just waiting for this mod. Till then Battlefront 2 just sits lovingly on my home screen...

Wow, you mean your waiting for me to release this mod and then you`ll start playing BF2?