A more presentable and meaningful way to run the mod for Unreal Gold, if not any mod for Unreal Engine but the shortcut file method isn't just for a mod like Salvage Storm.

Hello, I've updated the file for the demo again but with a more presentable and meaningful way to run the mod for Unreal Gold, , if not any mod for a game powered by the Unreal Engine. This I thought was important over everything else I've created so far.

I really want to get onto the Steam Marketplace but I had to ... inspect the files I've made and used before making any attempts getting the kind of approval I want to get onto Steam and explain why (on here) are important and presented in such a way and unfortunately, this means going after my closest and unseen friends, the other mods (and explains why my methods are better then them or it was worth the time looking into).

This is the hard part. This isn't a joke. You've heard and read many stories of games and items being thrown off and taken off Steam? Stories like Nintendo going after products for violating copyright and trademark like River City Ransom Underground being removed from Steam for example. This is why this is important.

Executives, usually for Windows need to be coded and compiled and to do this professionally, this required a license with an agreement with the compiler to what expected when the programs are compiled, usually comes with something like Visual Basics C++ or a programmer which requires a license to be bought. Usually it's explains how to use the content for commercial purposes and the kind of boundaries a developer has to selling the product of the software.

So, what many modders here have done (including myself, which I'll stop and I've replaced thankfully with a more presentable and maybe lawful means) is that's they've copy the main executable which runs the software and just taken the .ini files which are automatically read by the copy executable. This allows modders to easily make their mod easily into their own identity, which allows anyone to believe that it's a clever way of presenting a total conversion mod.

However what it's really doing is that they've taken the developers hard work, like Ion Storm who've created Deus Ex and pay mass sums of money to get Deus Ex onto the market or Epic Games who've typed and written the Unreal Engine and allows the executible to be run with it. Especiality in American where software and code can be patented. They're taken the code and re-disturbuted. Interestly enough, another reason why they've done it is because no one is stopping them. I mean who knew total conversion mods would go as far as the Steam Marketplace?

Even when the item/mod is free, it's still commercial, because that's item is placed there and attracts attention which represents someone's career and etc. Not a big deal?. It's been un-noticed or no one doesn't have the means to prevent listing like that. They may not care. They will!

Anyways, I have a fix for this and a good replacement for mods which do this. Firstly, DO NOT COPY AND RENAME THE ORIGINAL GAMES EXECUTABLE FOR DISTRIBUTION. This violates DMCA laws in the United States because the code in those executable are usually copyrighted and I hope no one files a kind of complain like that in the future.

What can be done, because the Unreal Engine was written for Windows, the Epic Games' Unreal Engine takes advantage of the freedom Windows programming offers. Usually with running software on windows, if not in DOS, which Windows was built upon, software can tag code on programs to make them run differently, the method is still used today, interestly enough, with Steam also. 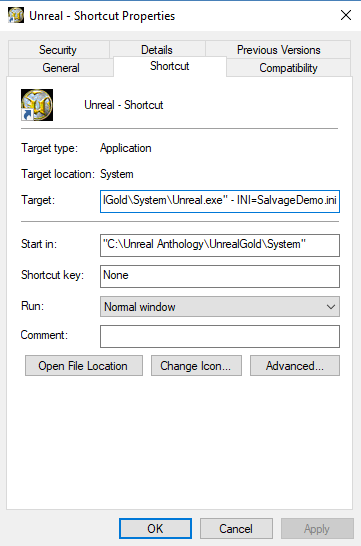 So this helps me place a reasonable fix onto the problem I see the files would violate copyright laws in America. The replacement is, to create a shortcut of the original executable like the Unreal.exe or DeusEx.exe files but to tag the target file with the INI label and this works, like this on the image above.

It's also the reason I've placed the console commands recently which is almost getting washed away, if anyone is interested because they help alot to improve design for mods: Moddb.com

Because as the Unreal Engine reads those .ini files to run the content it needs and with the help of windows, someone at Epic Games allows the Unreal Engine to run outside files in their system folders to change the experience running their Unreal applications. This is valid, because the shortcut file can be distrubited onto any windows platform and it requires and attached itself to the original .exe file to be run if anyone has this, only if someone else owns the original .exe file which the same. I strongly think this is more presentable for a mod then copying and renaming the original files which came with the game the mod is intended for.

This doesn't mean I'll dump and fully reject coping .EXE files to help build the mod. The copying .EXE technique can be a tool to help build mods in the Unreal Engine 1 community and to make it easy making the kind of content users want to make. I've benefited from it making Salvage Storm. I just don't distribute files when they become commercial as Steam's marketplace allows mods to be featured there for download and to be run by some means.

I mean, of course, it's not like the other mods take all the other files in the system folder and re-distributed them, still I wouldn't think it looks nice copying the original .EXE file and re-disturbing it because that file has been compiled from the developers, not from the modding community. The other files are fair use (in my opinion because it requires the intended .EXE file to power them. No .EXE file, no means to run them. It's debatable but I strongly believe that's the case, but really, I urge anyone to be careful about this.

The funny thing is... maybe the extremely funny, is that when a shortcut is created, re-programmed and works perfectly fine, with the help of Windows, these program can have their icons replaced. This is the best news about it. To replace icons within .EXE files because they've been compiled, no one can replace the icons on those, however what anyone could do, is download a special program to crack open those files and replace those icons and re-disturbed them. Cracking a .EXE file to replace icons, run the risk of violating copyright laws. They could have just placed a shortcut and change the icon from there. Who knows what someone going to do when they get the change to make takedowns, with the kind of culture we have at the moment. I know my fix wouldn't violate copyright laws and I'm preparing for explain what the files I've presented does.

So I've created an icon for my mod (Steam marketplace requires items to have icons, something I've pinched after seeing the what they require from the marketplace) and I didn't have to go the effort to find a crack program to replace icons for Unreal. Windows does it for me. So that's the mod... have a look with the download which I've updated and see for yourself. It works and it will be placed as my final download for Salvage Storm, which will be free and not a paid mod or any form of money making means. In this case,I had to rename the shortcut to the name of the file and place the icon there to make it different. Rather fitting that the shortcut tab hints what it really does, thus making it more of a mod. I think it fits.

Having said that. for those mods out there for those games from the Unreal Engine, could you please try and change this? It may be relaxed now but if mods appear and they keep using this technique to help distribute mods, someone is going to notice. Well I have and then claims would appear. This doesn't happen but because I'm pushing forward with what I'm trying to do, I'm trying my best not to leave anyone behind or have someone take the kind of example that would get them into trouble.

Really, check it out:

Epic actually included the source code for the game launcher in the unrealpubsrc224v and UnrealGoldPubSrc source releases for modding.

So there is no need for starting to copy the original executable as one can just compile an own version based on source Epic gave out specific for this purpose.

Also, it might be different for the Unreal Steam release, but otherwise the games won't work or worked correctly with the original executable anymore for various reasons.

Thanks for being that to my attention. I've spoken to the guys at TNM. The file and headers provided by Revision are mostly under fair use. I'll PM you! Excuse my late reply.