A group of modders, armed only with fond memories and an arsenal of artistic talent, are out on a mission to bring the visual spectre of the Monkey Island series back to life through Unreal Tournament 2004.

A group of modders, armed only with fond memories and an arsenal of artistic talent, are out on a mission to bring the visual spectre of the Monkey Island series back to life through Unreal Tournament 2004.

The action genre, or more specifically First Person Shooters, has fast become the most popular styles of gaming. How ironic you might find it then that a modification for one of the genres most popular games is inspired by a game from a genre widely accepted as being 'dead'. While the adventure game genre is anything but thriving, nostalgia and the fondest of memories for it are still held by an abundance of gamers.

While Lucasarts is perfectly happy to drain gamers pockets of their hard earned cash with countless, shallow and utterly bland Star Wars games, there are still those who remember a time when Lucasarts meant REAL quality, and an example of this quality is the Monkey Island series.

Now a group of modders armed only with fond memories and an arsenal of artistic talent, are out on a mission to bring parts of the series back to life. 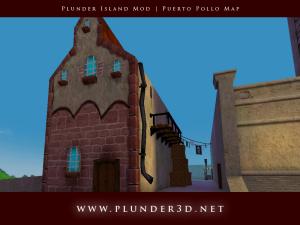 No Pirate town is complete without bendy drain pipes!!


Howdy! For those yet to be enlightened, could you please introduce us to the team working on Plunder Island, and how long you've been working on the project?

Although no more Monkey Island games have been announced, Lucasarts still own it as an intellectual property. Has this resulted in any legal issues with the mod? 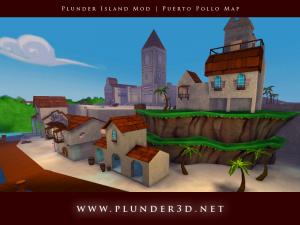 Fans of the series will pleased to see how well the artistic style has transferred.


We are doing every little bit of work on the mod from scratch, and have no intentions of making a profit on it. So no, we have not heard anything from Lucasarts.

As stupid a question as this might sound, why are you making this?

We like creating something of our own and we think we got a great concept. The Monkey Island series has fantastic atmosphere and we know there are a lot of die-hard fans out there really wanting this... And oh yeah, we like pirates 'n chickens.

Not all, but Goblin is enough of a fan to cover for the rest of us... 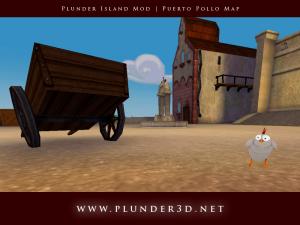 Terrible, it seems even chickens are on crack nowadays!


That's what I like to hear! Why did you feel Unreal Tournament would make the best foundation for an MI mod? Was it an easy decision or did you consider working with any other games first?

We were really on the thought of making it for Far Cry. But as Goblin got UED as a core subject and we saw the possibilities in the engine, the decision was easy enough.

There have been various Monkey Island mods in the passed on different engines (such as Quake 3 and the original UT) were any of the team involved with those? 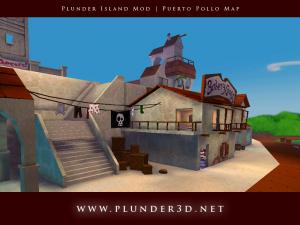 It's clear that while the mod stays true to its subject matter, the levels are clearly also well designed for deathmatch, and the game play style of UT2004


While it is clear you're doing a lot of work to bring visual elements of the Monkey Island series into the mod, can the gaming community expect anything in the way of new game types or mutators?

We're bringing in at least one game type we really think will hit it off. It's called loot and is team play based. You might find yourself hunting for treasure on the undead team, or defending it as the pirate you were meant to be.

Are you only going to be building Plunder Island for now or are there plans to develop further with more islands from the games?

We will only focus on Plunder Island and first get done building the two maps: Puerto Pollo and The Beach. Hopefully we will later expand with making other parts of the island as well. 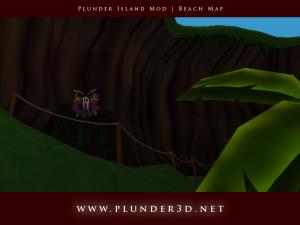 
In terms of the actual Island's design, are you sticking quite religiously to the way it's built / laid out in the actual Monkey Island game, or is it a more compact design that encompasses all the main features of the Plunder Island we know from the game?

We are trying to stick to the way it really looks, but since there are a lot of parts from the game you only can imagine, it opens for creativity and good game play.

Are weapons/characters also been changed to suit the MI theme?

The answer is yes, we even got Murray. 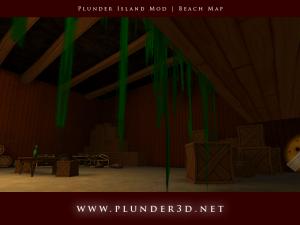 While the outdoor levels look great, it's also good to know there will be plenty of buildings to wander in and out of too


Are there any specific details you feel hardcore MI fans will really enjoy?

We think the general layout of the game will be enjoyed, and we try to get a lot of juicy details. If you've played the game, you'll recognize a bunch of places. Summed down thing: the chickens!

Your web site mentions you're even adding new sound effects and music. Is the music a direct copy/simulation of MI's many soundtracks, or are you creating entirely new songs in the same theme?

We will also here create it all from scratch, but it will also be inspired be the good ol' Monkey-theme. For a little taste, check out some of Goblins earlier makings: 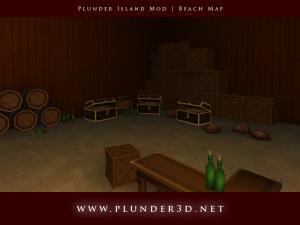 No pirate game is complete without treasure!


I have to ask this... what the hell is chicken surfing all about???

Hehe, well.. it exists and I guess you just have to wait and try it out for yourselves. It's fun!

Can you give us a rough estimate as to how much of the mod is now complete?

The two maps that will be included in the first beta are over halfway done and we're doing progress on a lot of areas. There's a lot to be done and we're a rather small team, but if we keep our pace up we will meet our schedule. We've been thinking of expanding the team to speed things up a bit, but since we're very picky we haven't announced any open positions.. Though, if you feel you got what it takes, feel free hit me with an e-mail metz@plunder3d.net (if I don't answer, send me a pm here at moddb)). If I was to guess, I’d say 20-30% 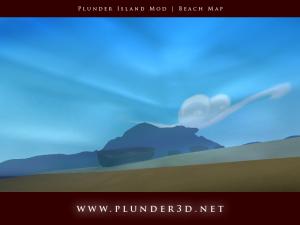 Ah.. so peaceful, right until you get shot in the face anyway


Any chance of a public beta or playable demo soon? Please??

We want our first public beta out in the first half of 2006, hopefully even earlier.

First of all, thanks for a great site here at moddb. Also, the support we get from those of you waiting for this mod is deeply appreciated, it makes us work even harder. Stick with us and you won't get disappointed . Big shout outs to www.mixnmojo.com

Thanks to you Metzy for doing this interview and best of luck to the whole team on the rest of production. If you'd like more information regarding the mod you can check out their official homepage here Plunder3d.net

As Penny Arcade fans call it: "The Dreaded Continuity"! It screws all good things over, especially Doctor Who.

Guybrush Threepwood is the fire that ignites my loins.

And he is dangerously sexxxy in MI2: LeChuck's Revenge with that sensual beard. Oh no! Just talking about it has made a mess.

lol yeah i know the feeling, its guybrush's haircut that doesnt it isn't it :D

I can't wait for this to come out. Long since I've wanted a new Monkey Island game, and you guys look to deliver. :)

hmmm, I think as soon as my current project is a little further into production I might have to start something! Grim Fandango would just look amazing on the Doom engine, especially sticking with the surreal and colourful visual style. I was thinking about maybe doing a remake of Blood on Doom aswell, I think Grim is a far more deserving prospect though :D

I loved seeing the cartoony version of MI2 Guybrush at the end of Curse of Monkey Island, though. It made me wish they would remake it, using the Curse graphic style, with dreamy Dominic Armato providing the voice of Guybrush. Mmmmmm, Dominic Armato...

I think that this team has an ingenious idea. It could actually become a very popular and really enjoyable modification using the Unreal Tournament Engine. I had thought of doing the same modification using a different engine, and some day, I probably will begin that project. So I salute you, Plunder Island Team, for starting this project and hopefully, finishing it.

this mod is further more convincing me that I really should do a Grim Fandango/Doom 3 mod. That'd be feckin lush!

Yeah, that would kick arse!

I would buy Doom3 for that. I would even be prepared to work for that.

I'll start my project VERY soon. I'm thinking of doing Grim Fandango or Monkey Island on the HL2 Source Engine, or UT2004, but I'll thnk about it. I hope a lot of people will appreciate the final product :) What engine do you guys think would be best for an 'Action/Adventure' Modification? This is going to be a large modification, which may result to custom .dlls etc...

Again, Doom 3 is wthout question the MOST suitable technology to do a port of grim for. I think ill wait til Prey is released before I start the Grim mod, make use of all the nice new features but the use of lighting and shadow in Doom tech is just perfect for Grim, no other engine will do the game justice. For MI, as is clear through the interview UT2004 works with the subject matter really well, but I think the PERFECT tech for an MI game would be Crytek. The cartoon shader supplied with it would look sweet, the water is excellent, the level of quality through night and day styles on the engine is consistantly high and the potential in terms of island size and being able to travel from one island to another is endless.

To be honest, HL2 engine although it looks pretty and has got some stunning technology behind it, it's a safe bet. HL2 graphics are nice but they lack the 'character' that games such as grim and monkey island really thrive upon, you need to use an engine that'll really help emphasise the whole visual universe of the games, and while a big advantage of source is that it's a very versatile engine, the drawback from this is that it can't necassarily bring the same depth of character to a game that maybe other, not so versatile engines can.

Sorry, that was a bit of an over the top superficial rant there :-D As I say, I'm pretty set that come the release of Prey I'll be ready to develop a Grim style mod, but I can see it being far more of a 'visual tribute' to grim than an actual game. For MI, I would personally reccomened ether Farcry tech, or UT2004. As the plunder team have shown, while UT2004 is hardly the most up-to-date technology, its totally up to the test.

Thanks for all the nice comments guys, it really motivates us.

is this dead? is this released?