This page is dedicated to creatures of Paradigm Worlds. 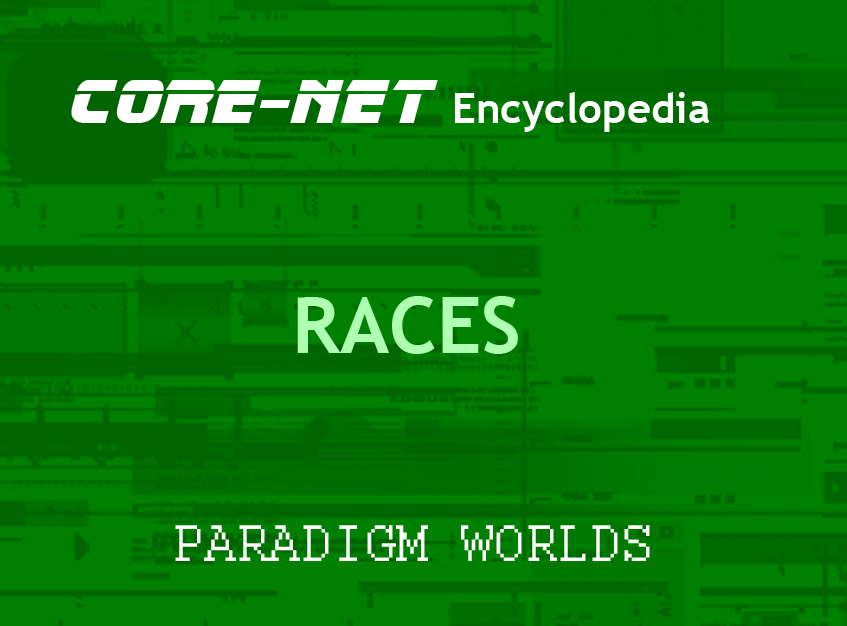 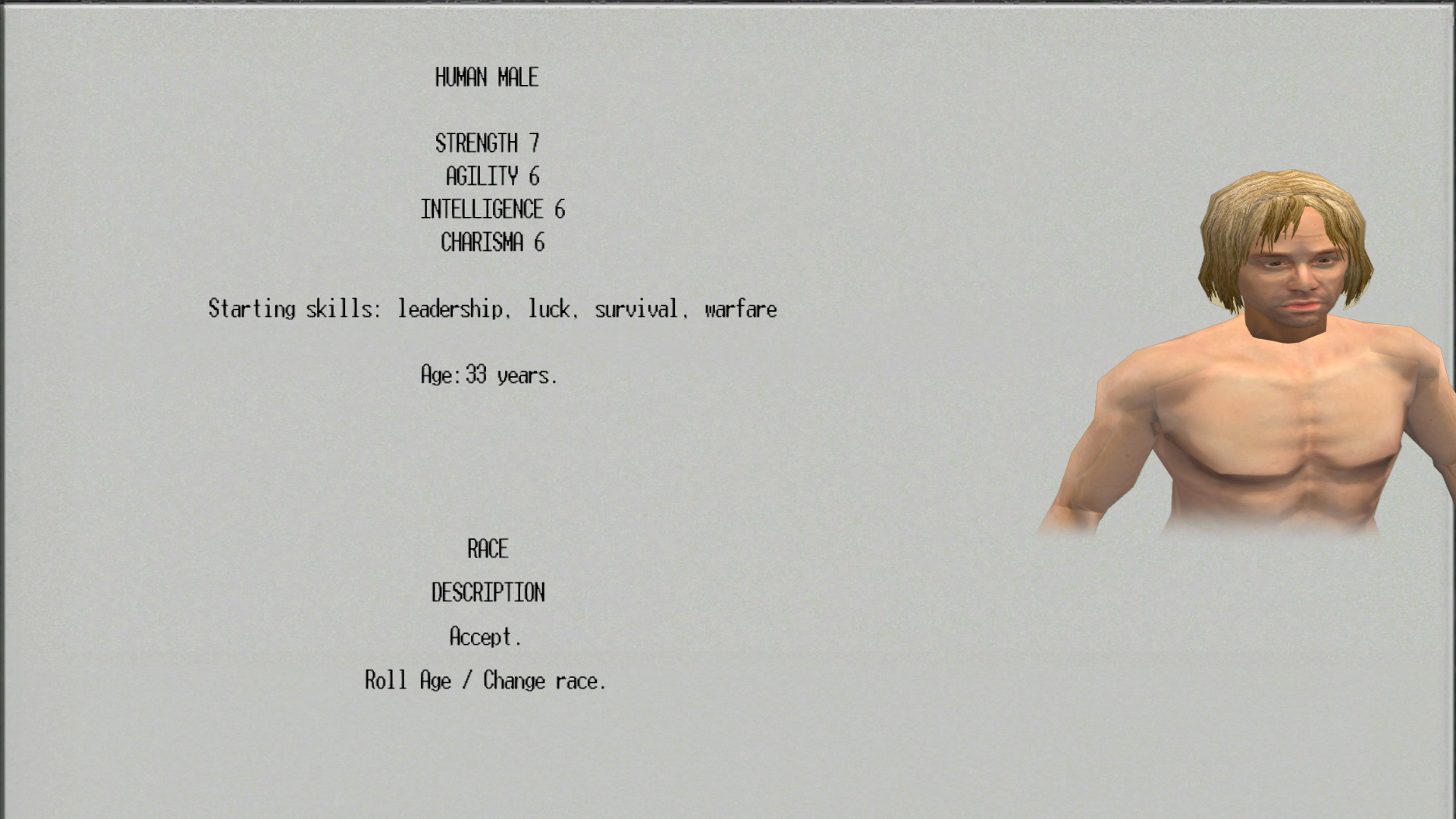 Maybe not the brightest part in a food chain, but resolute and resourceful.
Males are almost predestined to be a good leaders. At least in an event of army needing a skilled general.
There are races more intelligent or fitter in physical terms, but humans have developed skills that enable progress them in a civilized world. 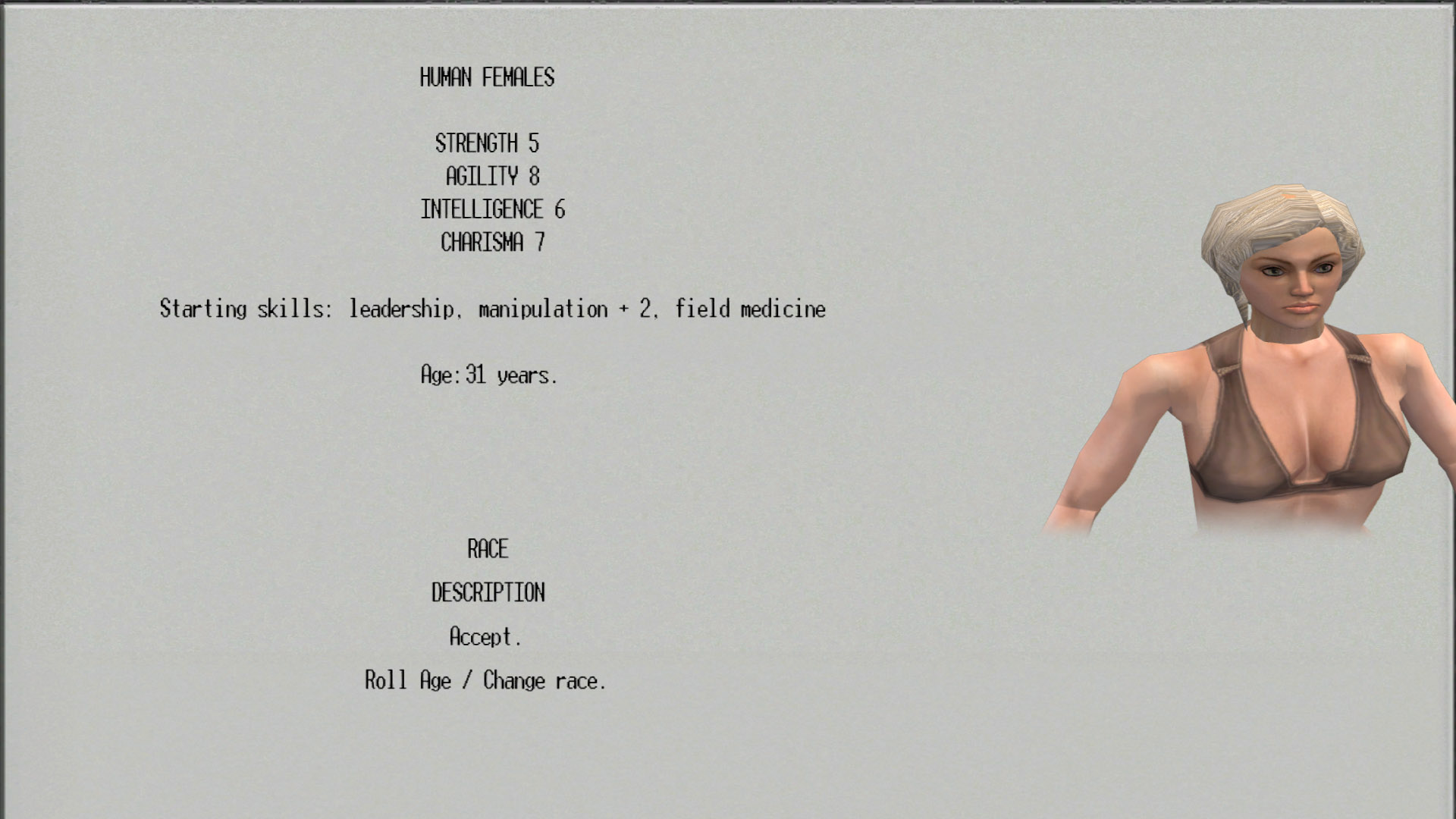 They are known for their outstanding beauty. Most desirable in this cruel world.
Skilled manipulators. Females take part in battles, but rather as medic than on the first lines. There are known exceptions of brave woman who became leaders. Females use their skills of persuasion to convince others do their dirty work. 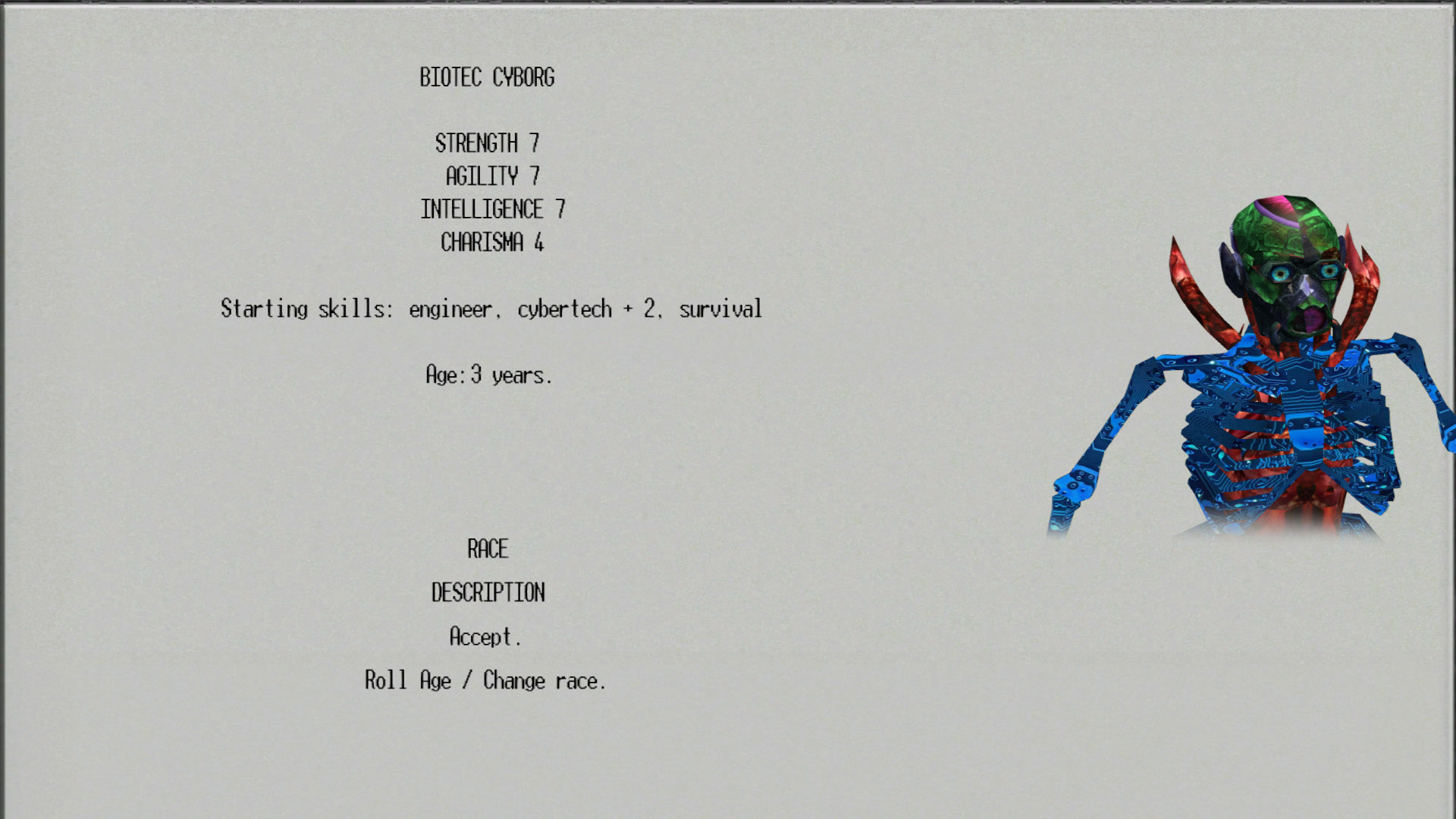 Imagine a triangle. In one corner put a cockroach, in second - Artificial Intelligence - and in the third any humanoid. Look in the middle and you understand who or what is a Biotec. After apocalypse AI calculated best chance to survive in the new upcoming world order and Biotec is a result of that calculation. Cold logic, high survivability and efficiency.

It is still a new being and lack of evolutionary experience may be a drawback. It's repelling appearance and dangerous posture doesn't help with making alliances with other races or factions.

Most of biotecs act in swarms gathered in hives, however there are reported units acting as independent individuals.
Special ability: Thanks to its uncommon origin, Biotecs' organism is very resistant to effects of Persuadraton, one of most dangerous, mind affecting weapon.

Thick mist of secrecy surrounds origins of these creatures. Is it really magic that keeps them 'alive'?

Or - as other say - there is a scientific explanation of their existence? Micro organisms invisible to a naked eye, could those control skeleton bodies?

Whatever explanation there is, let's focus on what we actually know: skeletons are very strong, even durable. They possess incredible intelligence and manipulative skills. They have also good organizational skills, that allows them to develop complex technology, or even whole societies.

Often called 'Uruk's poorer brother' that only proves how much underestimated are these creatures in a modern world. \
They might be not as strong as Uruks, but they are agile, fit and have good eye to a detail. At least when it comes to hit an enemy.
It is believed that Orcs come from chimps as they possess great agility. They are also not as aggressive as their bigger brothers - Uruks. They lead a lifestyle of a dominated species.
Orcs do servitude jobs for others: they work as slavers for example. There were reported small tribes in jungles, living in a very primitive conditions. However some Orcs have chosen a life of a 'nearly civilized' creatures. Those are accepted even in sole human towns and cities and cooperate in mutual benefit.

Orcs come from chimps, uruk come from gorillas. That popular proverb may be true. It describes correctly relations between these two species.
In time of evolution uruks developed strict honour warrior code. Uruks are born warriors. Their naive posture and low-civilized way of life makes them victims of powers more skilled in diplomacy or an art of manipulation.
More intelligent races often exploit mental weakness of Uruks. However, that may change. Recently many Uruk tribes decided to cease wars between each other and join together in fight for independence from major factions.

Creature that it's intelligence can be surpassed only by its ugliness. Often despised because of their look.
They do not care about their popular opinion. They happily use any chance, any advantage to their benefit. Morloks have great engineering skills, thanks to their high IQ. Their passion for politics push them into arms of totalitarian regime - a fact which can be hard to understand to outsiders.
Indeed Morlok's character is very chaotic, nature contradictious and they lack discipline. Their leaders decided that only way to gain control over them is to keep nation them under strict supervision and full surveillance. 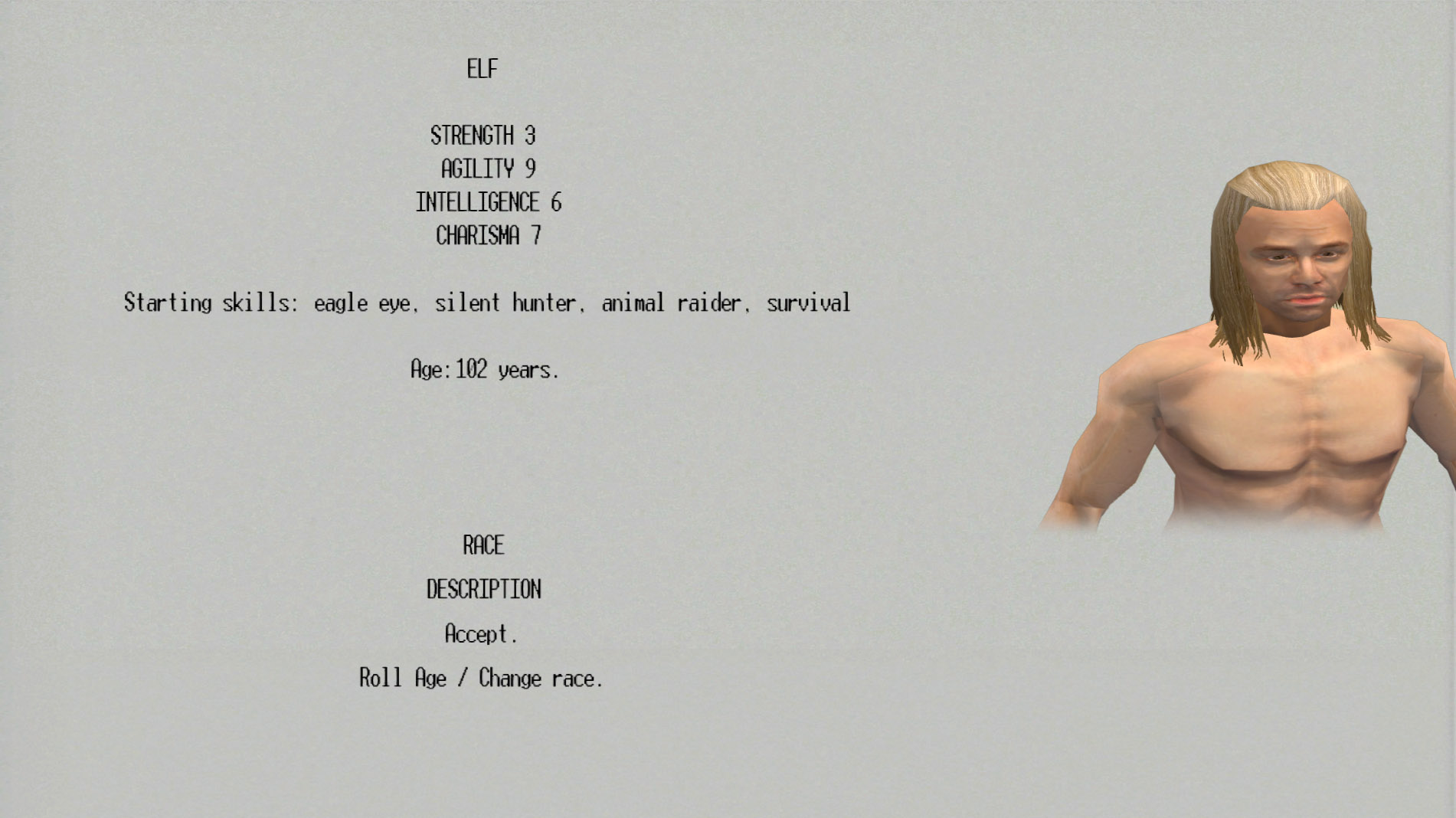 Probably biggest victims of their own prejudice. Their well known hate of technology puts them in a very misfortune position in modern evolution chain.

They believe to be the chosen ones, however it is hard to tell to what exactly. They await better fate with no luck for eras so far.
Elves are very agile, quite intelligent and are believed to have strong personalities. However their very primitive way of life and dislike to any form of civilization makes them vulnerable to other powers. They are skilled ranged warriors, good hunters.

Part of elven society has been corrupted. It is unknown what caused process of decadency, was it a cultural fall or was it caused by a virus, or whatever else. Some Paradigm scholars suggest that Pikts, or Rotten Elves are an example of devolution. Pikts are usually smaller than elves. Their intellectual potential is very limited. Pikts have basic tribal organization, based on animalism and shamanism.
When attacked, or during common war raids, Pikts are extremely aggressive. That gained them fame of being mad or crazy. 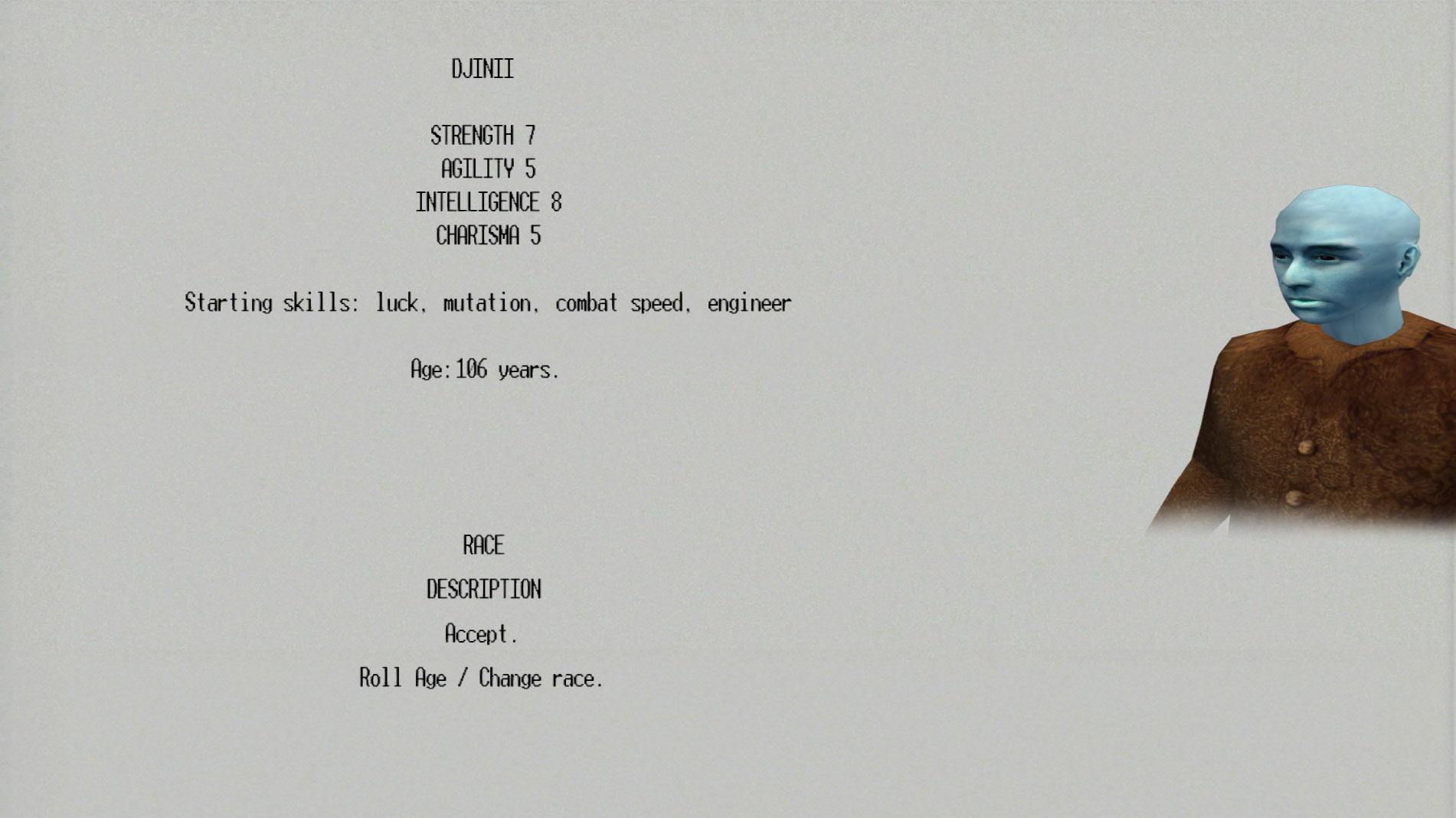 Their high intelligence and true love for spiritualism gained them opinion of magical creatures. They are egoistic, introvert or both - it depends on who is talking about them.

A term 'Reincarnation' - which is used for mutation currently, was developed by their race. It has some mystical meaning to them.
Djinii's avoid assimilation with other races, and keep to themselves. However their intellect places them often in roles of leaders.

Apart from blue djiniis, there also their red counterparts. Red Djiniis are driven by internal, consuming rage. Need to conquer, and possess. To have power over other beings. Being deadly efficient with any weapon, they evade open conflict to the last moment. They weave plots, corrupt, weaken their prey and attack when it is already harmless.

Blue Djiniis pursue knowledge and usually become scientists, scholars, diplomats. They are fierce warriors too, and most ruthless known Inquisitors were all blue. 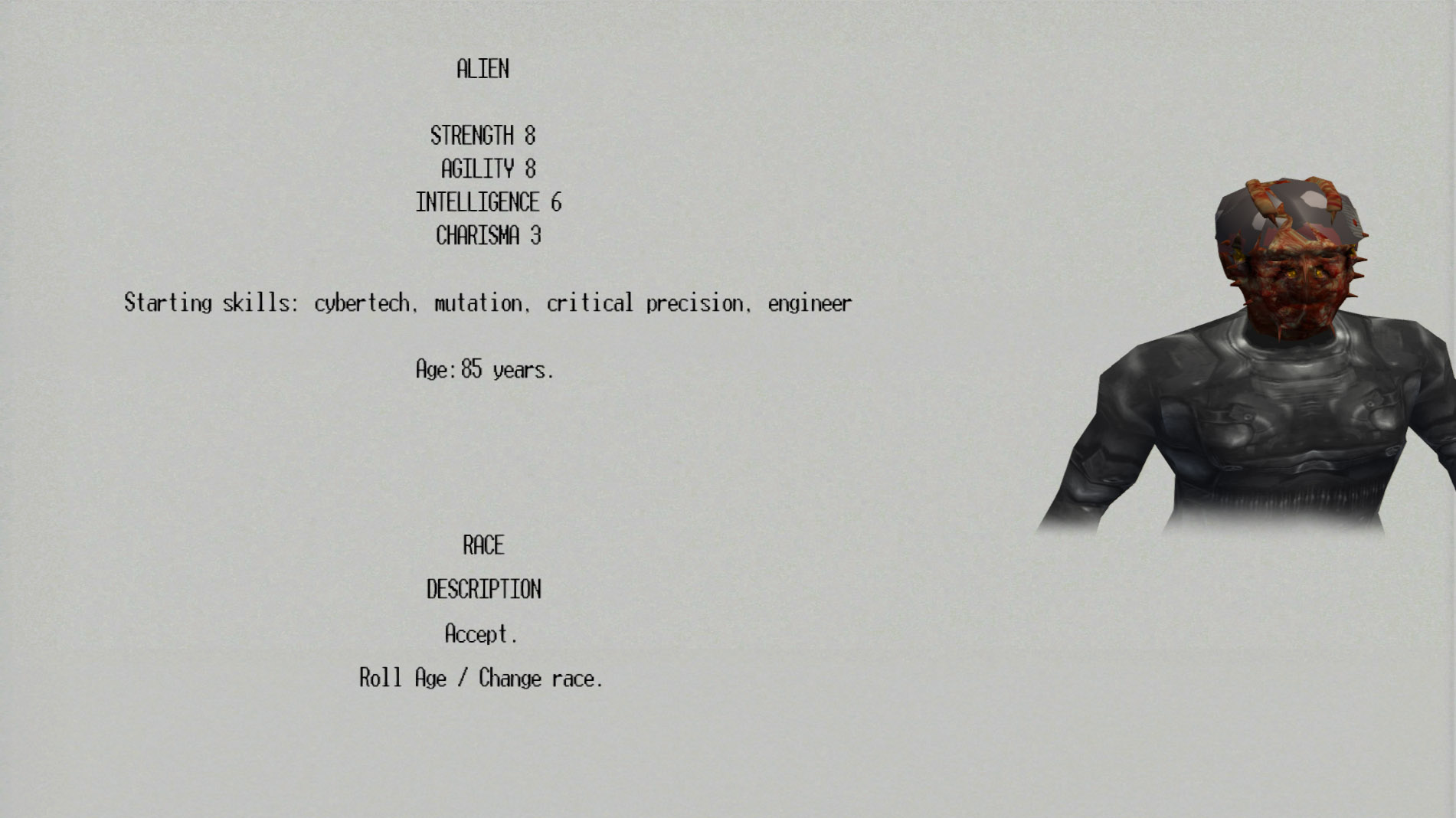 Gained their name because of their look which is very different to any other Earth humanoid. It is possible that they evolved from an organism of an alien origin. But nothing has been proven.

No matter their origins, they have decided to base their society on ancient pre-apocalypse data deciding that most fitting for alien culture is monarchy based on serfdom and warrior honor code named bushido. Alien scholars studied parts of human history to the degree, that they believe this form of government can be efficient if balance between tradition and technological advancement will be kept.

That is why, to these days, traditionalist, and close to nature, to jungle, way of life is very much respected. But... Alien's society is very much divided. Part of society still lives by traditional ways, while others entered era of super-advanced technology.

Aliens are skilled hunters and warriors. They have militaristic nature. They have pragmatic approach to any faction, they do not favor humanity over other races and vice versa. 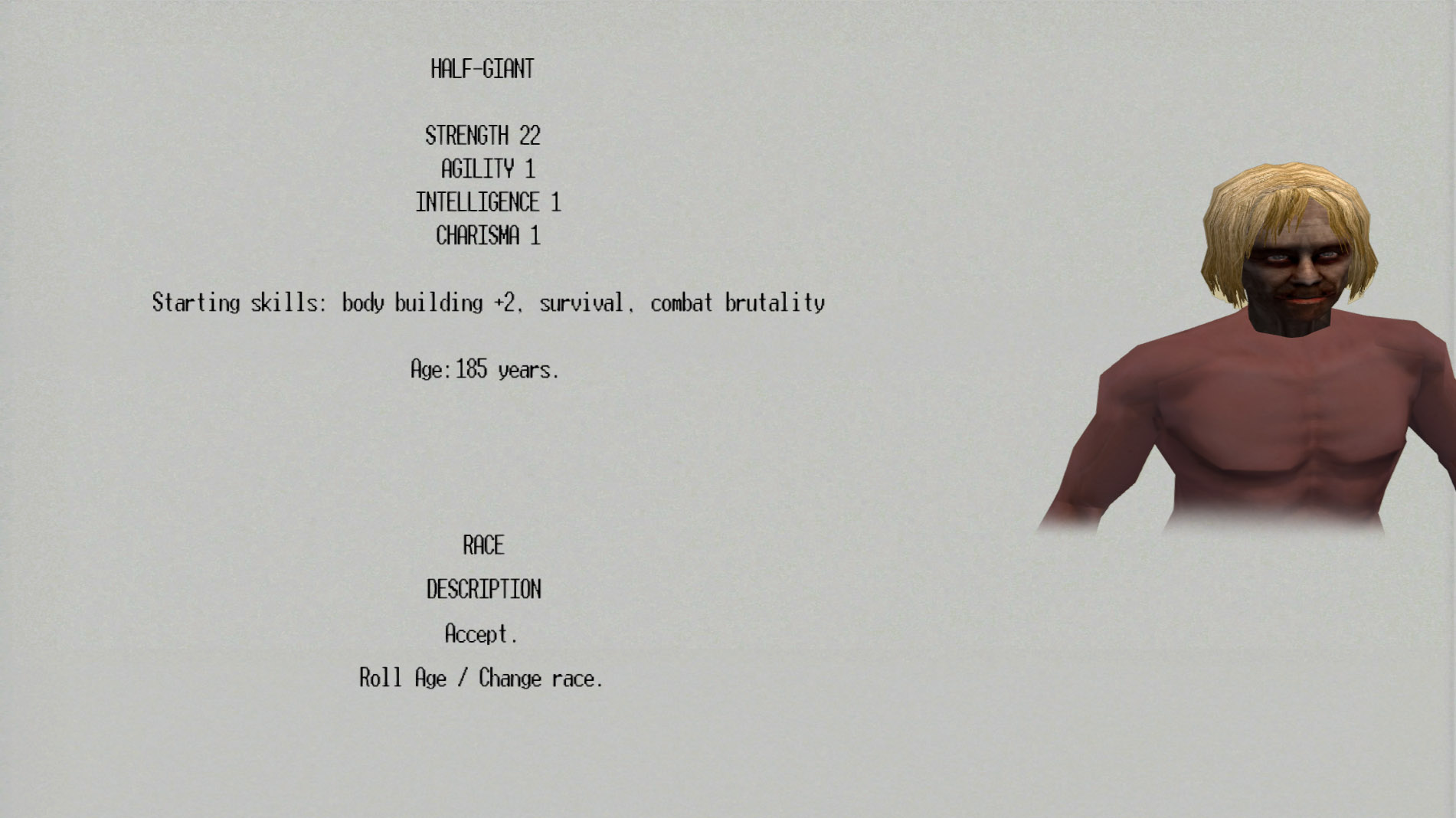 They are favored great esteem for their survivalibity on a battlefield. In later Eras, when firearms or energy weapon become more popular, half-giant's large size and low intelligence limited their usefulness on modern battlefield. 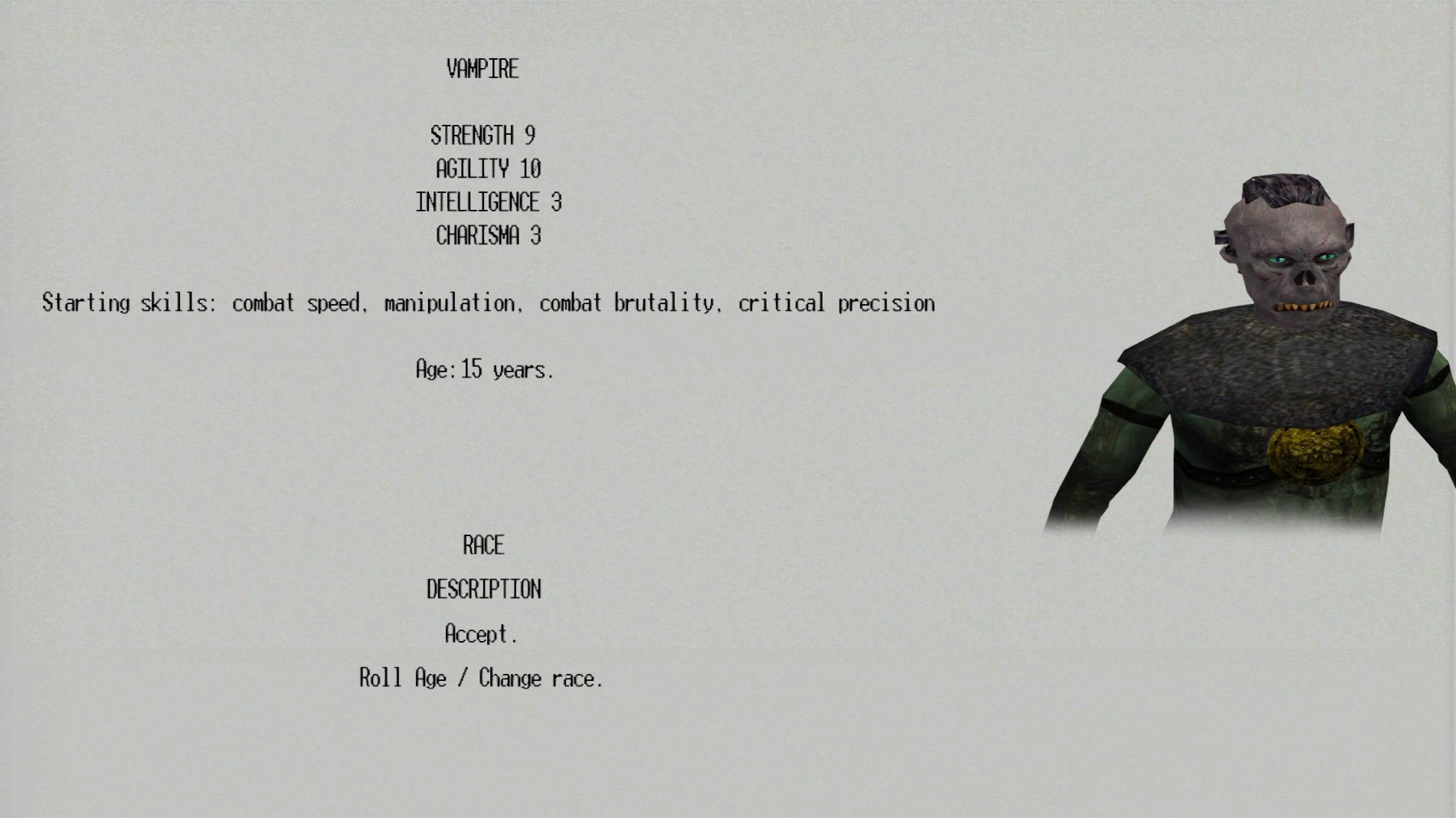 One have understand that vampires despite their humanoid posture they have more in common with animals than with any sentient race. Vampires are on an early stage of their evolution and they come from an organism not bigger than a bacteria.

Vampires rely on their cunning more than on intellect which - as it was mentioned earlier - is on basic stage of development. That doesn't mean that vampires are stupid. On the contrary, they are able to create complex plans to secure their existence. Vampires possess great mimic abilities that help them imitate humanoid behaviors, even if they do not comprehend their true purpose.

You will never understand a vampire from a human perspective. Despite their humanoid look, vampires still think more like animals, a foreign organism. Their cunning is more a gift from evolution, that came from need to catch up fast with the rest of the species on the planet. Vampires still evolve, almost as quick as mutants, and it is hard to tell what might be expected from them in the future. 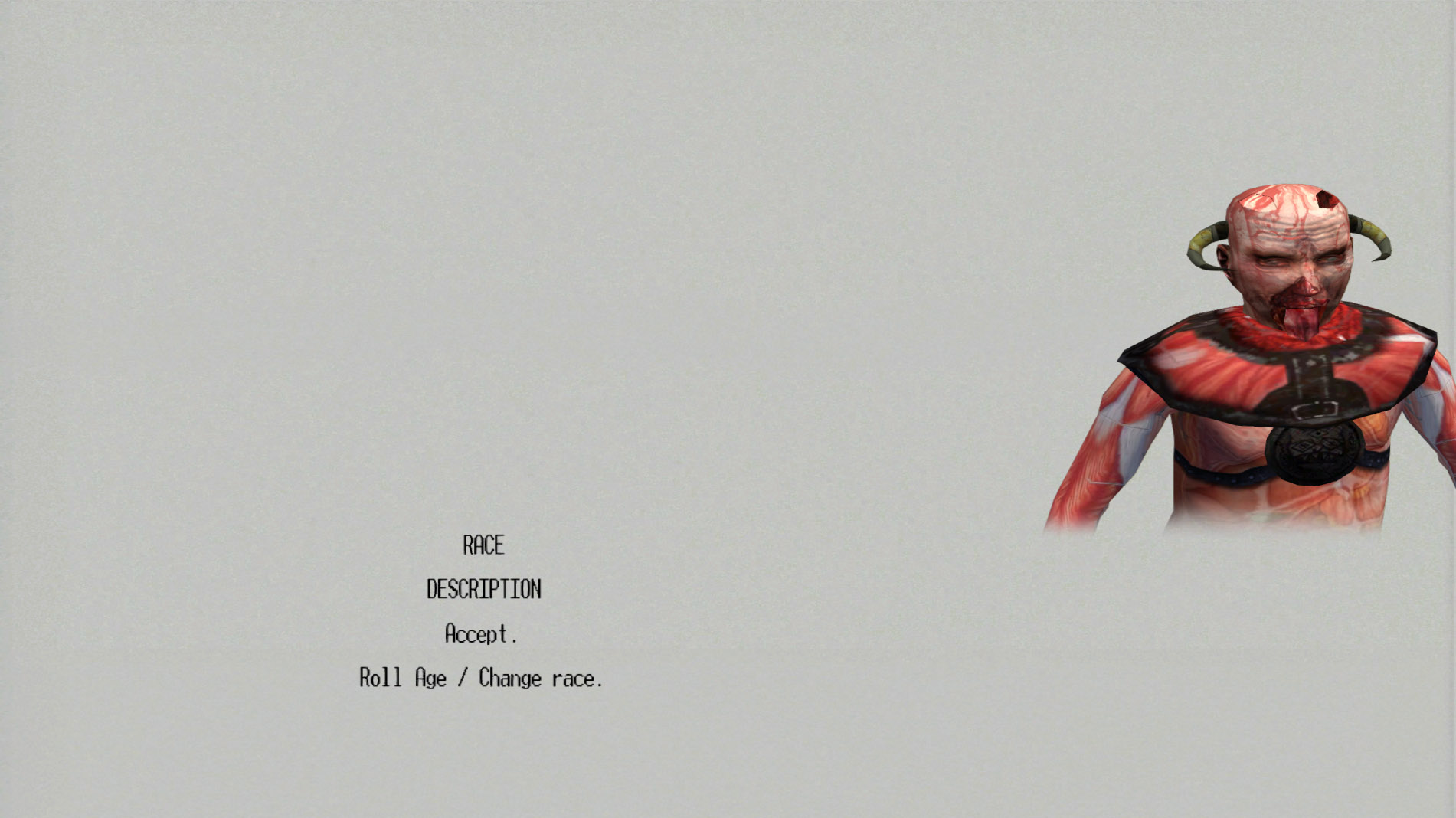 They are first and only - so far - species artificially engineered in a post-apocalyptic world.
Mutants were designed in laboratories of new world.

Despite no hard evidence, it is believed that Sanitarium Conspiracy scientists got into possession of pre-apocalyptic knowledge. Apparently it was used in experiment camps to create new organism.

Fear of plots, influence of foreign intelligence is considered to be major threat to Sanitarium Conspiracy. That's why any info on mutants is based mainly on rumors.

Sanitarium's scientists treated various races with a virus that's most probable name is Narvik-1 and later Narvik-2. That resulted in creation of various kinds of mutations, however most test victims died shortly after tests.
High death rate, but extensive tests resulted in very fast evolutionary process which outcome were mutants. Again, how they managed to escape from these test camps it is unknown. There is a theory - that mutant's escape has been planned by Sanitarium authorities, to test mutants behavior in open environment. Very fast evolution process resulted in emerging new race. New mutants, are very agile, but also sentient. Most intelligent created an Order that signed some kind of truce with Sanitarium. Regarding mutants - there are more questions than answers. 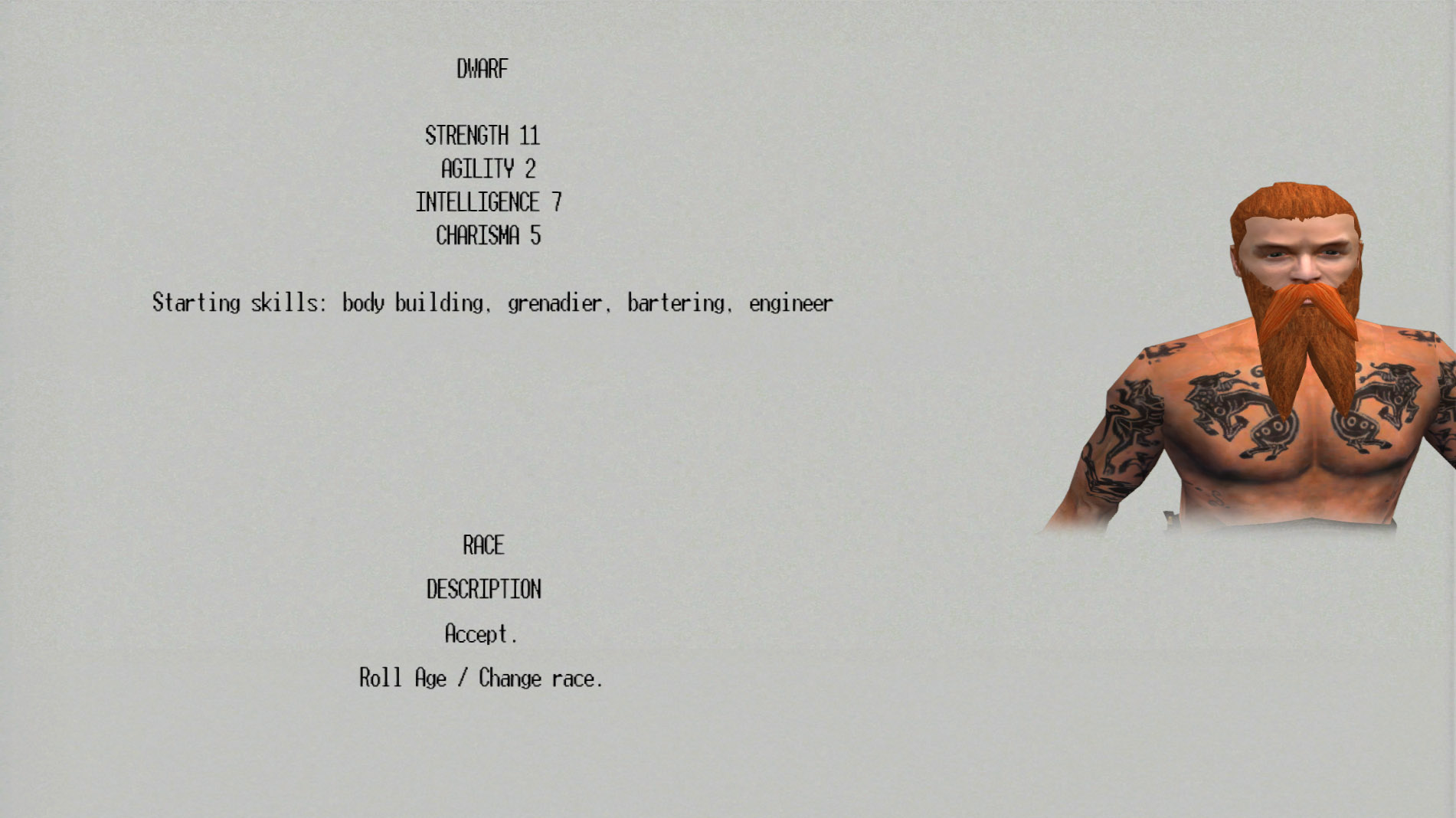 As far as it sounds incredible, dwarves most have to do with Morloks. They come from same kind, species, although their evolution paths split some time ago.
Both creatures share similar intelligence. Dwarves' path of evolution drifted in favor of physical strength. For centuries dwarves developed skills of engineering and knowledge of explosive materials.
As a race they prospered well until their mining bussiness has been overtaken by Morlok Creatures's Republic. They seek refuge in human cities, with small luck. Dwarves tried their chances with with Magioucratic powers, also with not impressive outcome. They have been allowed to live in 'ghettos', but they never reestablished important role in world's power ladder.

Latest rumors suggest that pyre crystal, previously mined by dwarves is contagious in its pure form. It seems that only Morloks are resistant to it. Refined version of pyre crystal is harmless.
Nevertheless some groups of dwarves have been reported to act irrationally. Named as 'angry dwarves' they attack merchants and caravans, even military patrols. Random targets, no pattern, indicates that their
behavior may be a result of some kind of sickness or mutagen disease.