There’s no better challenge then that of a human opponent. Now you can challenge that human to a game of Robo’s World 3 Multiplayer! The multiplayer comes complete with multiple game types and maps which you can read about in the main article.

Playing Robo’s World 3 DEM03 or later, you will have access to the game’s multiplayer component. Once you select “Multiplayer” from the main menu, you are taken to the Multiplayer Menu. Once there, you’ll have several options. 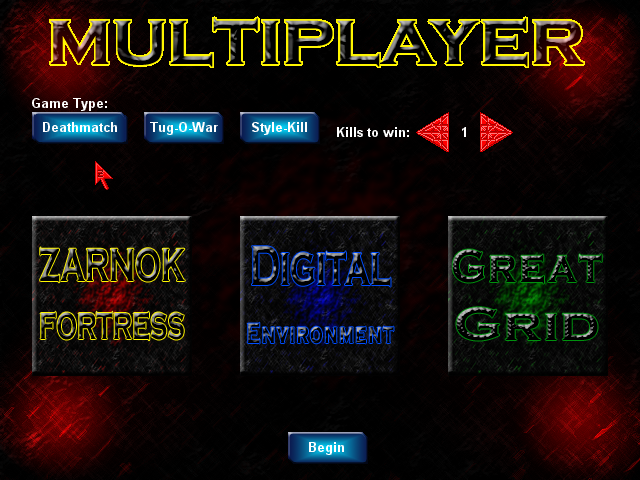 After setting the amount of kills required for a match, (1-100) you should select a game type.

Deatchmatch is a standard “first to the set amount of kills wins” game. Simple.
Tug-Of-War is slightly different. Now, every time one player gets a point, the opposite player loses one. This means that if player one kills player 2, player 1 gets a point and player 2 losses one. First person to the set amount of kills wins.
Style-kill is your third option. You get a choice of laser, grenade or melee, your three weapons. A kill will only count if it is performed with the weapon you select. So when you select “Laser” only a laser kill will count. You can still damage your opponent with the other of the two weapons, as long as the finishing blow is delivered with the selected weapon. When “Grenade” is selected, they will spawn more often on the map.

Once you have your game and kills set, select one of the three maps and click “Begin” at the bottom of the screen to start. The screen will re-size to “windowed” mode (if not already in that mode). This is because the total resolution of the game changes to 1280 by 480 to accommodate both players. You can still toggle the screen size but keep in mind the screen may get distorted.

Controls are the exact same as the Single player, but the “grenade mode” cannot be toggled to using the mouse. (1 mouse, 2 players: doesn’t work!) So you will need to specify an Angle measure instead. Don’t worry, the game will prompt you to do this as you click “Begin”.

The Multiplayer has a slightly different version of the HUD then in the single player. It is solely along the bottom of the screen, and shows your health, grenades (to a maximum of 2) and your score. Score is the only segment in need of explanation. It starts as an empty black box that slowly fills from red to blue. Once full, that player wins. Finally, to avoid confusion, if players get close to each other small indicators will pop up above each player, marking one as “P1” and the other as “P2”.

In the maps themselves, there are a few distinct features. These take the form of small glowing spots in the floor. Green spots are spawn points, a player will always re-spawn at the farthest spawn point from their opponent. Dark blue spots spawn HP Boxes which will fully heal a player. Light Blue spots spawn Point-Defense Drones; you can still collect up to 8. Red spots spawn grenades, which will be automatically collected if you have less than 2, giving you a maximum if 2.

Oh, and to make your time in the multiplayer all the more memorable, there is a special music track that has been added to this part of the game.

Enjoy killing each other!
To play the multiplayer, check out DEM03 in the "Downloads":

Interesting update. Although the interface sure looks like a 5min job in Photoshop with all the generic effects.

Yea, those buttons are temporary and will probably be changed by the final release. But Photoshop is the best tool I have for "buttonizing" pictures. There are three images to each button actually, they light up as you hover your mouse over them and are depressed when you click on them.
Also, in the menu, the four red dots in the corners light up depending on the position of the mouse.