This article is focused on the class called Shadow.

Shadows are dexterous warriors whose reputation has always been covered in a shroud of mystery. They often remain silent and only watch their surrounding. Although Shadows are short for words, in the battlefield they are first who attack without useless phrases and poses. These lonely warriors were born under a sign of Falcon and thus the rest of soldiers is no match for their ability of sight.

Due to their naturally perfect sight they favorites crossbows, but on the other hand, they are also often seen fighting with daggers and one handed swords. Combination of these kinds of weapons and their special abilities makes them one of the most fearful entities on the battlefield. 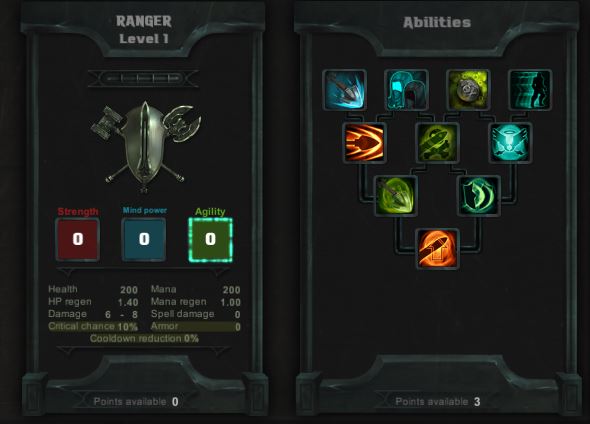 This skill is a powerful shot which causes high damage. Shadows really like this ability and it is very common for them to use it in battle.

It creates a standing copy of a Shadow which can confuse the enemies and also grants Shadows invisibility. It is one of the most useful skills by which Shadows can even win a seemingly lost battle.

It affects enemies by a special poison which makes them more vulnerable to critical strikes. A quick and very deadly skill.

This is a quick ability allowing Shadows to move several steps further within a couple of hundredths. Ideal for a sudden escape from danger.

Power Bolt can be unlocked after unlocking the previous skills Special Shot and Illusion. It adds a pushback effect to the shot.

Shadow Strike arises after the mergence of Illusion and Poisoned Cloud. It allows to poison the enemies during invisibility.

Second Nature allows Shadows to perform Dash without losing any mana. It is a mixture of Poisoned Cloud and Dash.

Corrosive Shot deals increased damage to the enemies affected by poison. It can be obtained after unlocking Power Bolt and Shadow Strike.

Ghostly Chill allows to dash through enemies and descrease their armor for easier annihilation. This skill arises after the mergence of Shadow Strike and Second Nature.

Precision Cut can be unlocked only then, when all previous abilities have already been unlocked. It increases critical damage by 30%.