This article is focused on the class called Vanguard.

Vanguards are skillful and brave warriors whose main atribute is strength. They are tall and muscular men who love steel. That is why their most favorite weapon are swords and axes of various kinds. Due to their high power and stamina they are also able to wear heavy armor protecting them from injuries resulting from close combat which is typical for them.

They do not feel fear and they are not afraid of predominance of their enemies. They are led by their desire for victory, which gives them power to overwhelm every danger they are facing. There is no menace they cannot handle and this is the reason they are highly used characters on the battlefield. They can use swords, axes, maces and shields. 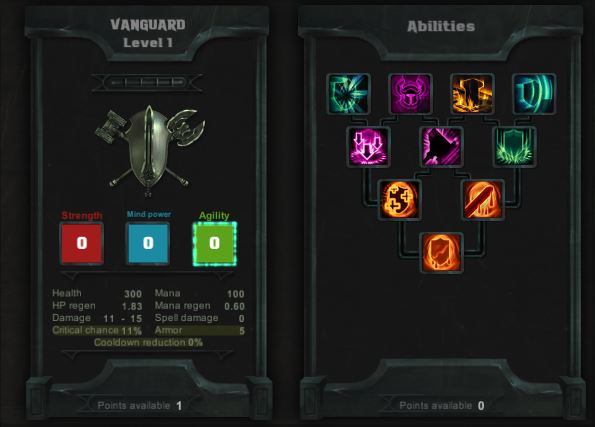 A strike with a shield that pushes back enemies. It is an useful ability best used when Vanguard wants to make some room or when he is overwhelmed by multiple enemies standing close to each other.

Mighty Blow deals a powerful areal hit that often stun the enemies standing close by the Vanguard. Perfect for a quick escape, when Vanguards are surrounded by enemies.

It is running with a shield held as a ram that knocks down enemies. Ideal for every situation.

Trembling Bash is a mixture of Shield Bash and Dreadful Scream which allows to slow down the enemies after they were hit by a shield.

Overwhelming Force is a mixture of Mighty Blow and Overwhelming Dash. Vanguard can knock down all the enemies standing in its path.

Blood Armor arises after unlocking Trembling Bash and Dreadful Hammer. This ability increases armour of Vanguards when their health dropped below 50% of their max health.

Blood Gutter arises after unlocking Dreadful Hammer and Overwhelming force. This skill increases the physical damage of Vanguards while their heath is lowering down.

Vital Protection, the final ability, can be unlocked only then, when all previous abilities have already been unlocked. Vital Protection increases the health regeneration depending on the current value of the armour.