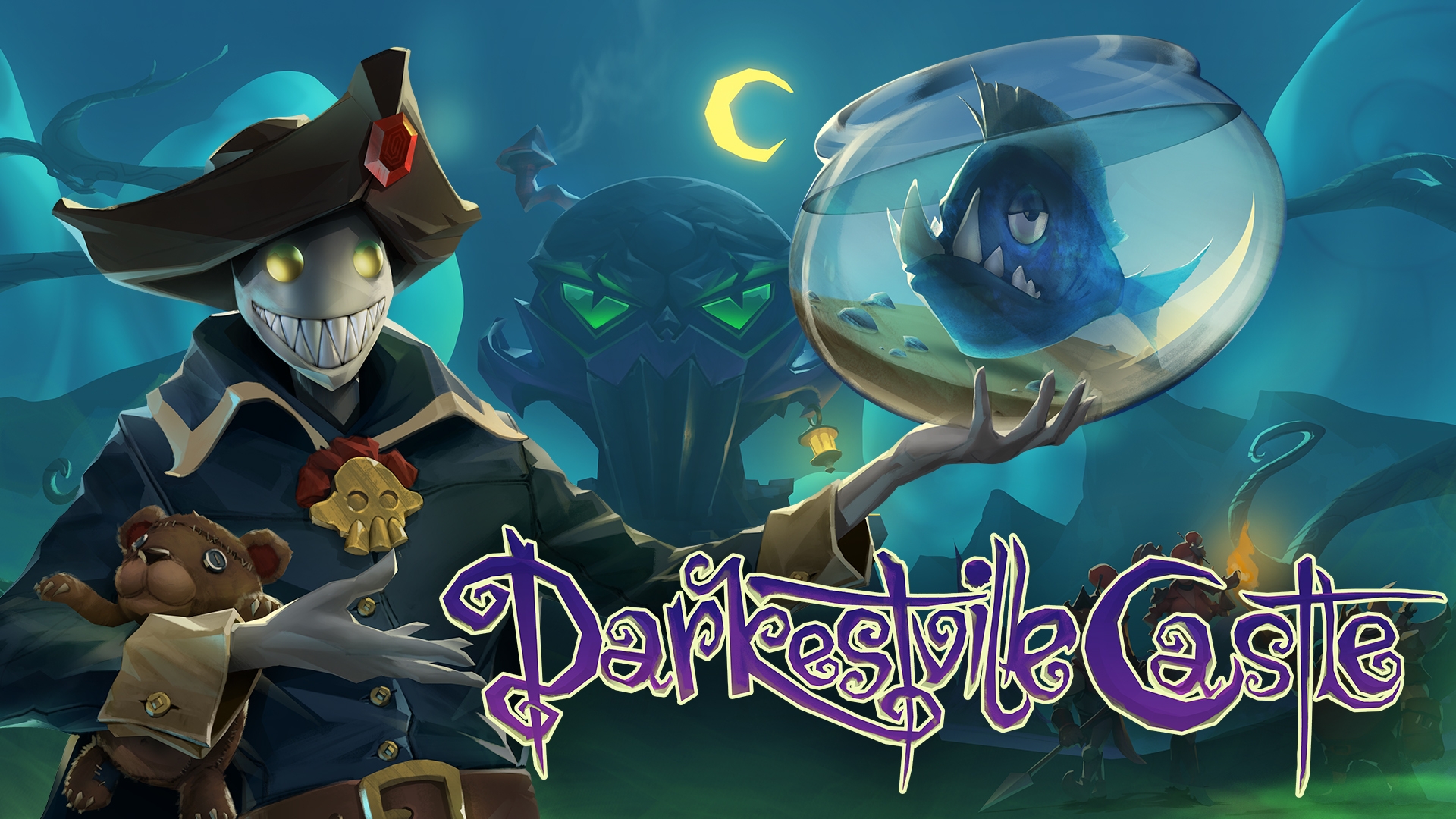 Hello, would you mind introducing yourself to our readers?

My name is Hernan Lopez and I’m producer at Epic LLama. Since we are a small developer team I did a lot of stuff in Darkestville Castle (like editing audio, fixing some minor things on the graphics, and stuff like that). But I guess the more relevant thing I did in Darkestville Castle is write the story and design the game!

Why did you decide to enter the world of videogames? How long have you been actually creating games?

Well I really loved video games when I was growing up, and as a kid and as a teen we use to play a lot with our friends, we designed our own games as kids… on paintbrush… growing up I learned to use flash… and started to make games for my friends… as a hobby, then I realize… Hey... I could sell flash games to gaming portals. Then I quit my job as a call center guy and started to do videogames for living… and that's how Epic LLama started… like… almost 10 years ago!

What was your first games console (or computer), and what did you like and dislike about it?

My first console was a Famicom… What I liked… everything… To this day I collect Famicom and NES cartridges. The only thing I disliked was that my mom didn't let me play it more than 2 hours a day… and only in weekends… and only if I had good grades… So… I'm not a psychologist… but I guess that making videogames a prize to earn… played a major role on making me a video game developer… And that's why I went to my friend’s house to play videogames… Now everything makes sense.What made you want to make video games and specifically what made you want to make Darkestville Castle? Darkestville castle is one of those games that WE ALWAYS WANTED TO MAKE, but since we made flash games for browser… that was impossible… don't get me wrong, we loved to make flash games… but flash games are so much smaller in size on scope… than… FLASH got sick and his market shrunk… so we as studio have to choose a new path… or just leave the industry… And since there is no way we are going to leave the game industry we decided to grow, to grow in a direction we always loved… to make that game we always wanted to make, but we weren't able… and so we starting the development of Darkestville Castle. With Fabian Peruggia Ribeiro (super mega awesome programmer of the team) we are not just colleges, we are friends from out teen years we lived a few block from each other (in fact we have moved but still live a few blocks from each other)… and if a franchise made us bond a lot was the Monkey Island franchise… Our favorite one Monkey Island 3. We spend hours playing it… So we wanted to make something that feels as if it is the late 90’s again and you are about to play a forgotten graphic adventure of that era.

What is Darkestville Castle about? Could you tell us what the story of the game is without revealing any spoilers?

Thats a tuff one… talking about the story without spoiling… But I’ll do my best, Darkestville Castle is a game about being the bad guy... Cid. The character we follow, is the Demon of Darkestville Castle, he loves to do evil and evil loves him, every night he disrupt the lives of the citizens of Darkestville that are used to his presence and evil deeds, in fact, they rized Cid since he was just a cute little Demon. As every villain Cid has a nemesis… Dan Teapot, and he will trigger the events that will change Cid life… The rest… is spoiler.

What will the gameplay be like… what will make this game different to other games in the same genre?

The game is like a classic graphic adventure from the late 90’s not only in the style, the art and tone but also in the gameplay with the 3 action verb coin, grab, see and talk!We believe you don't have to fix what isn't broken, however we added something of the new graphic adventures, a button that highlight the things you can interact with, we want the player to focus on the puzzles and not on the pixel hunt, of course this is button is optative…But the main new thing here is the fully voiced story, we will be on the shoes of Cid, The Demon of Darkestville a declared villain, and he will live a pretty unusual story.

I love the art style, what inspired this style in art direction and why were you drawn to this style? Is there a particular method you are following? How did you come up with the main character?

Thanks! We tried to emulate the late 90s art style of Monkey Island 3, but with our own touch, so we make him a bit darker and with the perspective of the scenes a bit more twisted, matching the tone of the story. For the art we made 2D digital painting using Photoshop, Gonzalo Sayavedra is the man behind those lovely backgrounds you see in game. The artistic result ended looking like a son between Monkey Island and The Nightmare Before Christmas.To make Cid we used as basis an old nameless character I used to draw on high school… the original one was more skeletical and creepy, yet had the distinctive BIG Smile Cid have for mouth, the big round eyes, the cape and the hat. We adapted that nameless character making him more likeable and easier to draw… that resulted in the Cid you can see and play now.For all the characters we used vector graphics as base, that later we animated, those were drawn by Juan Arfinetti and animated by me and Fabian Peruggia Ribeiro.

What game development tools are you using?

What were the greatest challenges in the making of this game, and how did you overcome them?

I think one of the greatest challenges on the technical aspect was handing and editing the hours and hours of voice acting the story has… organizing the sessions with the actors, doing all the data entry and checking that the lines are ok, well delivered and with the right timing.

Music is such an important part of the gaming experience; what style/genre of music would you like in this game?

Again, we wanted to transport you back to the late 90s graphic adventures but with our own dark twist and that detail was persistent on the music, so when you listen to the tunes of the game you surely will feel like in a spooky graphic adventure game of that era.

What was your favorite game (or most inspirational game) growing up?

Well I have many games that are favorite and inspirational… but right now I can't stop to think on Monkey Island 3, I simple loved it… and I have to admit it… The first time I played it wasn’t on my own PC… when we were teens Fabian home was the «kids headquarters», it was a time when you played graphic adventure games… in local multiplayer and we played session of like 4 guys trying to save Elaine from the cursed ring!

What is the most rewarding aspect of being an indie game developer?

Living of the gaming industry is awesome because it was a dream so big and so impossible to reach when I was a kid that is just incredible… but being an indie is more than that… is following your dreams and driving your little dream boat as you think is best… that is just great… and when you find someone who played your game and you see that it means something to him it's just awesome.

What about your thoughts on the current state of gaming?

As developer I see that visibility is starting to be a problem… there are so many games released every day that showing your game to people is so hard! Don't get me wrong I love the idea of a lot of people making games that's what gives that many released… But that makes hard to find a public for a game!

When will we be seeing Darkestville Castle and what platforms will the game be available for?

In the last quarter of the year, and will be for PC and mobile devices... And I would love to see it on consoles! What does the future hold?For now… releasing Darkestville Castle is the only future, is our baby we put so much effort on it, so many nights without sleep so many coffee, it's our dream game and we want to release it to the world!

What games are you playing now? Which are you excited for this year?

Right now I'm playing Overwatch (when I find the time) with the same guys I used to play Monkey Island when I was a kid… (the magical wonders of online multiplayer) … And for this year… I'm excited about releasing Darkestville Castle!