Tactical gameplay requires significant changes to how ships move, fire, and take damage. Simply adding new ships and structures isn't enough - without alterations to the most basic elements of gameplay, it's just a mini-mod and not a total conversion.

Note: These latter four journals are unique in that they're structured to discuss how both base Sins and other mods have implemented these features. This is because they are substantially more "tweak"-ish than our first update, and at first glance it would be relatively easy to confuse their implementation with duplication. Multiple rationales can lead to the same change in gameplay, and so I'll try my best to explain why certain features behave the way they do, instead of just discussing the end result.

Tactical gameplay requires significant changes to how ships move, fire, and take damage. Simply adding new ships and structures isn't enough - without alterations to the most basic elements of gameplay, it's just a mini-mod and not a total conversion.


What we started with
Gravity wells in Sins were rather small. Planetary bonuses often changed total well size or the point at which you could build tactical structures, but smaller wells kept ships clustered together. Weapon ranges were often extremely similar across frigates, cruisers, and capital ships, meaning it was difficult to achieve a victory based on tactical maneuvering rather than ability micromanagement or fleet composition differences.

What they did
A lot of mods have drastically increased gravity well size and have been much better for it. Even base Sins can benefit from larger gravity wells, especially with regard to planetary defense placement. A lot of people don't take advantage of it, but gravity wells also slow you down the farther in you are, so larger wells also provided a more subtle gradient in this respect.

What we did
Gravity wells are a lot bigger in Dawn of Victory. 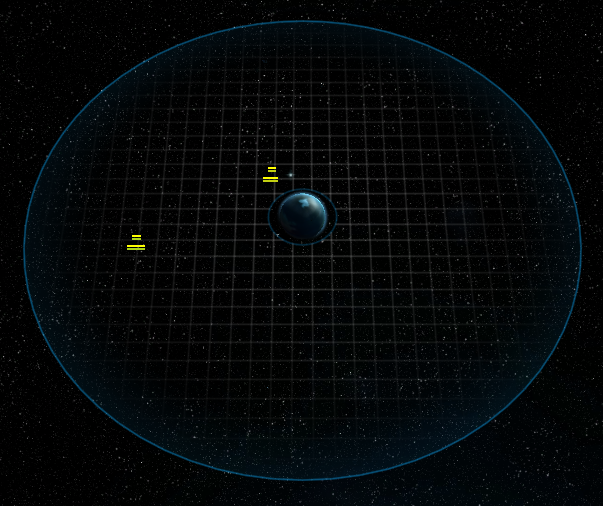 There's two main reasons for this: to accommodate long-ranged ships (more on that later), but also to make sure that players can use tactical structures like mines intelligently. With lots of space, you can draw an enemy into a certain area and then attack him: with small gravity wells, it's much more advantageous to either cover the entire well with mines or place them near each other, where an opponent would jump in.

In Sins, frigates were often treated as cannon fodder, and because of the way their weapons were aligned, the extent of strategy when it came to frigates was often simply repeatedly moving them out of range. Thanks to larger gravity wells, longer-range ships can successfully stay behind and fire their torpedoes or railguns while gunnery-focused ships with a focus on closer-ranged engagements can move up and hold a line in front of those ships. In short, it prevents homogenization of unit types, making each unit seem different rather than just another frigate to throw at the enemy.

And ranges are very different in Dawn of Victory. Ships like torpedo cruisers can often fire across the entire extent of a gravity well, depending on the planet's type and well size. Guns like medium cannons have decent but not exceptional range, and low-caliber guns like light turrets and flak have very poor range. Players again are encouraged to stagger their units rather than sending them in one big auto-attack blob.

In short, what different ranges and gravity well sizes do is help discourage "fleet composition wars". But tactical movement is only half of it.


What we started with
Sins' approach to damage is rather scattershot. Before I show the big damage graph, let me explain how it works. Ships in SoaSE have a set armor type, and weapons have a set damage type. Certain damage types do better or worse against certain armor types through damage multipliers - for example, a bunch of Garda Flak Frigates are going to do very little damage against a Kol Battleship because the Kol has VERYHEAVY armor, while they'll do a lot of damage against strike craft because the strike craft have an armor type of VERYLIGHT. Here is a graph showing how certain damagetypes do in base Sins: 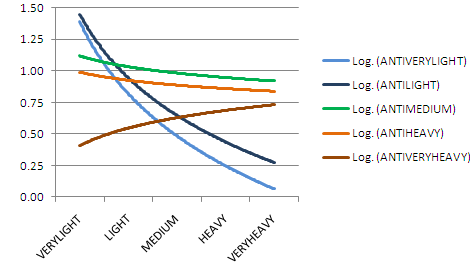 As you can see, ANTIVERYLIGHT and ANTILIGHT behave how you'd expect, but ANTIMEDIUM and ANTIHEAVY do nearly the same amount of damage across all armor types, with ANTIVERYHEAVY actually doing more damage to heavier armor than not. Why is this? The most likely explanation is to keep capital ships, one of which is free at the start of most Sins games, balanced in the early game. Another possible reason is accounting for accuracy - Sins uses a damage per tick system, and so visual effects don't always line up and shots always hit. Since accuracy therefore cannot be reduced, nearly every ability in Sins' that reduces accuracy simply cuts damage, and so the curve of ANTIVERYHEAVY may reflect smaller ships' ability to get away.

In addition, ships had shields that regenerated relatively quickly, with hulls that did not. Sins had a Repair structure as well as several units that provided hull repair and sometimes shield regeneration.

What they did
It varies. Some mods that kept the Shield attribute made it even quicker to regenerate while weakening the Hull attribute. This also ties in with damage, since if shield mitigation is kept in and damage is raised, downing a shield is a much bigger deal. I'm thinking of Stress's mod Sacrifice of Angels 2 mostly here, and the system (except for its sort of confusingly high damage numbers) does work really well.

What we did
Remember that graph up there? Ours looks a little different. Here's them side to side:

Since our unit tree is linear, rather than relying on capital ships at the start, we have no excuse not to heavily linearize damage. As a result, heavy guns do a lot of damage against smaller ships.

You might ask how this is balanced for longer games: after all, what's the use of a frigate when everybody's got lots of heavy guns? The answer is that a majority of the per second damage on a larger ship is in ANTILIGHT and ANTIMEDIUM, because the heavier guns fire a lot slower. For example, the Slavny has a medium cannon on the front, but the engine will turn your Slavny sideways most of the time because its light guns on the side have more average DPS. In fact, a ship with ANTIHEAVY damage, the Torpedo Frigate, is specifically designed to be balanced against the Flak Frigate, with ANTILIGHT, and the Destroyer, with ANTILIGHT and ANTIMEDIUM. In testing, it's worked just as well as in theory.

As a result, you achieve a sense of progression while keeping your older ships still relevant. The flak on a Slavny or Retivyy is never as powerful as that flak frigate, and so while your big ships can still counter unit spam and aren't completely vulnerable forever (like in base Sins), the role will be better served by a smaller dedicated ship, even later in the game.

Repair is a similar overhaul. If you've been paying attention to past journals, you'll know that since "shields" have been replaced with "armor", your armor does not regenerate. Your hull does, though, but since your hull is a tiny % of your ship's HP, that doesn't matter much.

As a result, ships cannot just sit around in a gravity well for ten years regenerating all their health. You have to send them back to a shipyard for repairs or choose which ones to send to a forward advance. Often I would save my frigates in base Sins when raiding neutral planets by retreating the ones that were near death, but then I realized the replacement costs for those ships weren't even worth the micromanagement. Here, it often is, and since getting to a torpedo frigate line is like a massacre waiting to happen, you may want to consider retreating your forces even when they're not half-dead. Think of how you can cause an enemy's artillery to route by flanking them with cavalry in E:TW for a similar example.

Right now light shipyards can repair frigates and heavy shipyards can repair cruisers - we fully intend for players to make regular trips back to repair their ships while sending fresh reinforcements in to hold systems rather than keeping their forces stagnant in a system. The relevant shipyards are relatively expensive, though, so destroying an enemy's shipyards might be an interesting way to cripple their fleets or make them dump a lot of money into a replacement.

Quite impatiently awaiting any release. :P

Very interesting analysis of the Sins system. I can't wait to see this in action.