A look at the concept work for developing the First person interface and some hints at future Excalibur Game Play Features.

Although currently far in the future of game development, at some point Star Trek Excalibur is going to need to consider how to handle core aspects of player interaction for First person game play.This does not just include how to show the players health or manage the interface, but all aspects of game play; Mini games, maps and sensor feeds, not to mention the many functions of Starfleet devices, especially the tricorder.

There are several problems with integrating the required features into the game. The goal of course is to work out how to integrate the interfaces needed to support the features in a way that it fits into the Star Trek Universe, and in such a way that preserves the immersion levels we areaiming for.

We also need to create a solution that fits into the LCARS theme we will be using for our UI designs. One approach is to disregard the immersion requirement and to simply have an interface which appears in the middle of the screen (Think Skyrim). However, we would rather avoid that in deference to the focus we have placed on immersion.

The solution to the immersion problem is to provide a "medium" for the interface to be rendered on. For an example of where this works well, you need only look at Fallout's 3 and New Vegas.

While providing a medium solves many of our problems, it also creates another; What device can we use to provide a medium in the Star Trek Universe?

There are of course several possibilities, which means we have to start researching. Below are some of the Star Trek Devices which we could have used for the Medium, and the reasons why they were eventually discarded:

The PADD is the most obvious choice to provide a medium. It comes in many forms and has existed in every series is some way or other:

So why has the device been discounted as a medium?

Well, it doesn't make any sense for Starfleet officers to be carrying the device into a combat situation. After all, you don't see many away team members carrying around a bulky PADD. The device appears to only have one function which is to display data. This means that Starfleet officers would be required to carry both a PADD and a Tricorder on away missions, which seems inefficient. This leads us on to the second candidate.

The Starfleet wrist Tricorder seems like a promising possibility, being wrist mounted and having a reasonably sized screen which could accommodate the interface. It is also a portable device, freeing up both hands for moving around and manipulating objects.

The problem is that, aside from the film Insurrection, the device was never really used again and seemed to act more as a control for the Isolation suit than in any other capacity. The device is also overly bulky, appears heavy and is difficult to hide, making it impractical for stealth missions. From a real-world perspective, it also seems to resemble the Pipboy from Fallout a little too closely (despite the Wrist Tricorder coming before the Pipboy). At this point it seems obvious that the device we are looking for must be multipurpose, have a screen and be portable, while being easy to hide in steal missions; luckily Starfleet already has such a device in circulation.

The Tricorder in Trek does so much more than simply scan. It can identify substances and atmospheres, monitor health, act as a com link, modulate force fields, hack computers and download information from a variety of source. It seems to be a clear choice to use in Excalibur and meets all our needs. However, still we are faced with a problem; Which model Tricorder should we use?

(For the purposes of this decision we would assume that all devices have been updated and are equal in terms of sensitivity and performance.) The typical models shown in TNG, DS9 and VOY are the Tricorders we, as fans, are most familiar with. They are versatile and durable, and function after being dropped in water, utilised in sub zero conditions and temperatures in excess of 500 degrees Kelvin on the most inhospitable terrestrial planet known to federation scientists the dreaded 'Class Y' (Named Demon Class.)

For Excalibur, however, the device has one critical flaw; it lacks the display area needed to handle the interfaces. But there is still one model Tricorder, which debuted in 'Star Trek: Nemesis', and covers all the bases. It also has the appropriate screen size and can perform all the required actions.

The Tricorder, given the name MK XII due to its departure from previous design styles, was seen in the movie remotely controlling the Argo Shuttle Craft, performing terrain mapping, and taking bio-readings. It was also interacting with internal ship functions, which makes it perfect for our needs. We have utilised the device, as the basis of our concept, for creating an interface: 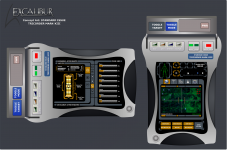 The device is part of the players’ inventory, and can be accessed with one of two key bindings; Opens the device in ‘System Access’ mode:

In this mode the device can be linked to a Starship or shuttlecraft, and using the appropriate command codes, can remote control the vessel and change settings on board. There probably won’t be the same level of control as seen in Nemesis, but specifying a landing point, enabling the autopilot and causing the shuttle to fly to your location, are possibilities which will be explored at a later date.

The device includes a "micro-gyroscope" which enables it to calculate its orientation and as a result which function it is in. When held horizontally, the Tricorder establishes a subspace connection with the target object and automatically logs in. Using biometric security to authenticate the person using the device it checks for appropriate clearance. The interfaces provided are greatly simplified versions of their Space Combat counter parts and so only provides simple functions; the goal here, is to mimic the captain giving only the most basic of orders. The main challenges are keeping the interface layout clear for such a small screen and maintaining a consistent ‘look and feel’ with the design of other interfaces. Opens the interface in the ‘Mission mode’:

This is the most common mode and contains all the functions a standard away team may require, including; a Map, Medical Scanner, Engineering functions (Hacking, decryption), Science and a Database up link to the ships computer.

The data uplink allows the user to view the current mission status and download new information on cultures, people and technology. The screen also includes a basic health monitor, a compass, an inventory management tool, a clock and additional options which in the example image are the toggles for the various map functions.

It's worth noting that the design and features included in the example above are by no means an indication of the final build. This is just a concept with the mechanics of ground combat used as an example. The final interfaces are still to be decided, however, utilising the Tricorder as a medium for the interface is the most likely route we will take.

Some of you may also be wondering why the interface isn't being modeled on the Tricorder, Team Member Luke has been designing, in this thread: The Tricorder

We need a device that can showcase both forms of the interface, which this concept couldn't do. This doesn't mean we won’t be using the design, however! One idea suggested is to have multiple devices available, each providing a different function or specialty.

If this is the case, then we can reflect it in Excalibur and introduce a strategic element to the game play, where the player can choose what equipment is best for a given away mission. The Tricorder concept above, for example, could serve as a multi-function device with no real specialty other than proving an uplink to the ship.

This is ideal for away missions, where having a star ship in orbit would be especially useful, or for co-ordinating large teams of people. Conversely, Luke's design may have enhanced sensor diodes, and thus be better at analysing geography or detecting life signs, making it ideal for science missions.

It's far too early in the design phase to say for sure what will and won't be in the game, and we do need to look at how certain things impact the game play mechanics. Luke's Model and the Nemesis Model fit different roles and, as the old saying goes; ‘Use the right tool for the right job’.

Quite a read! Worth getting through though :)

I wish you to find the best solution,

but this is entirely up to personal preferences

I disagree. As you say, personal preferences, but I think having a unique tool with less functionality would be OK, but different tools have different uses.

You use a bread knife to cut your bread, not a swiss army knife. Likewise, if you want to saw through weak metal, you will use a hacksaw.

I think having specialised tools is a better approach, as it increases immersion, sticks closer to ST lore and also, assuming you have a limited inventory capacity, you will need to plan your away missions and decide what equipment you need to take.