Part of what makes Orbit Tower Defense Redefined is the enemies in the game. Learn more about what makes enemies in Orbit different than other TD games.

In Orbit, we set out from the beginning with a focus on "differences in kind". Rather than focusing on the boring game of one-upmanship typical of most Tower Defense games, in Orbit we gave each enemy a specific strength and weakness. 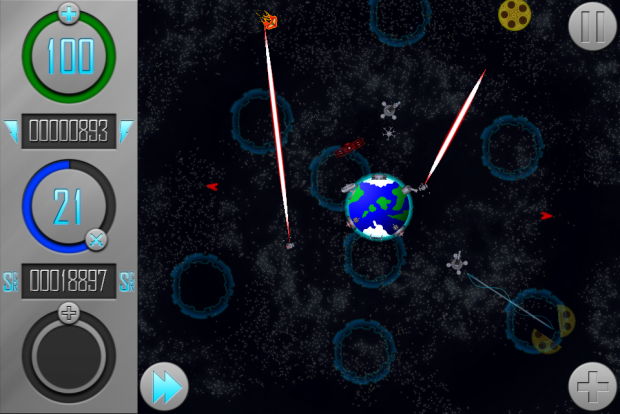 All powerful in their own right:

Even the very first enemies you encounter are worthy opponents, having more health than some of the later enemies you encounter. As the Waves progress, more types of aliens will approach the planet and each has a strength that you should be wary of; Scouts that rush at your satellites at great speed, Phases that slip past your shields, Shades that are invisible to your satellites, and Bursting Jellies that detonate on contact with your satellites in a spray of corrosive acid. There are a number of enemies in Orbit which I'll be posting about in detail in the near future. For now, it suffices to say that there aren't any enemies that are simply "upgrades" of weaker enemies, and this leads to a more compelling gameplay experience overall.