The Darkest Hour team answers some questions asked by the fans on the Paradox Interactive forums.

Darkest Hour was officially announced by Paradox Interactive only two months ago. Yet many questions arose from the community.
We already introduced to you some of the game's features in previous development diaries. Therefore, we chose to dedicate this one to a session of questions and answers.
Let us start at first with general questions about the game philosophy.

Did anyone asked about the philosophy behind the new combat mechanics?Earlier you told us, that the combat mechanism will be changed/updated. How? At least on the general aim level.


We kept in mind the idea that combat pace was too quick in Hearts of Iron II. We thence developed several tools to modify it easily (so modders can play with it as well). We tweaked many new misc parameters in such a way that land combats are now more realistic, e.g. slower and deadlier. Terrain and climate modifiers have been tweaked as well to provide players with more accurate results.

How are you approaching the issue of challenge? Are you going to do sth in order to curtail WC? If yes, then what exactly?


The main idea behind the game was to put players in the same position as world leaders during the darkest hours of XXth century. Therefore, you have to deal with dilemmas and, most of the time, no solution will be completely satisfying.
Playing Germany, will you be looking to wage the war as soon as possible and take the risk to leave your army or industrial base unprepared for a long conflict? As Japan, will you intend to invade new lands and thus have access to new resources or will you try to prevent a clash with the United States and the Western allies?
So generally speaking, you have to lead your nation dealing with constraints (more than in Hearts of Iron II). On the other hand, we were obviously very careful in letting minors still fun to play.

This question is aimed at Fernando. A few years back you worked on a mod project for WIF called 'T.H.E. Project' which was abandoned in the early stages.
Did DH, give you the opportunity to put in idea's/features that you couldn't do then into practice?


DH obviously offered to me the opportunity to implement ideas and features that I had dreamed of for years. I worked on this closely with Martin for two years now.
I for instance supported the implementation of a decision system for many months and finally convinced Martin to introduce it. Then I took care of the soft coding part with Björn and I can say that I am pretty proud of what we did in that regard. I believe this new feature brings a new dimension to the Hearts of Iron saga.

... and have you been able to achieve what you wanted?

You always think you could do better or more. There are still areas where I have tons of ideas ranging from minor enhancements to complete revamp. But development could go on for years this way. You have to make hard choices. And I am very happy with what we implemented so far.

Will country flags change according to the ideology of the ruling regime?


It is indeed possible to change country’s flag. We have implemented a new event command that changes not only the flag but most national graphics (such as the skin or the counter, etc).
Nevertheless, we choose not to change flags automatically based on the ideology, yet it is possible to write simple events to create this behavior. Something along the lines of "if government = communist and flag = democratic then change_flag = XXX_communist" would fit perfectly.

Is the tech tree the same as HoI2, slightly expanded, massively expanded, or entirely reworked?

Given the trade window automation introduced in AOD, and the spy mission automation you've previewed, does the team have any more plans with allowing the player to "hand-off" parts of the game? Perhaps something similar to HOI3's production screen or full/partial AI unit control?

Unfortunately, we cannot reveal much now, but a future development diary will introduce the new automated trade system. It is one of the most efficient part of the game. Many will be surprised how easily it can be relied on.

Hi, a short question: As DH is supposed to enhance modability, I wonder if there are any new event commands or triggers or the like? Well, other than the ones concerning the new features, of course.An example I had in mind would be something like a control or owned not only for provinces but for areas or regions as well. This way, you can not only check if someone holds e.g. Moscow, but if he controls the surrounding region as well.


There a lot of new commands and triggers, but we will introduce them in a future development diary. For now we can say that we have worked with the aim not only to correct and improve the existing triggers and commands, but also to add new ones! Based on the example you made, we can say that you'll be positively surprised.

Please make it possible to set military control by events!

Yes, we have implemented such command and players will be able to take decisions featuring them. As Germany, you will for instance be able not only to support the Fascist coup in Spain but also to directly control the Spanish army. American players can also assume the control of Chinese and French armies alike, which is especially useful for multiplayers sessions. We believe this feature will bring a lot of fun!

I've played with the E3 map, and I had one major problem with it, that small provinces like Gibraltar would be unclickable because the sprites/counter were too big, has this problem been fixed?

Yes. We have added a nice and functional zoom effect. It gives a clear view of what is going on on such small provinces while adding a nice touch to the map.

How is lend and lease modeled? Just by an IC increase like in earlier HOI-games?

When certain requirements are met, the United States can pass the Lend-Lease Act. Then they can choose how they want to help the Allies. This help can go from merely sending them resources to becoming an actual “arsenal of democracy” (reflected by the displacement of factories).
Moreover, the Lend-Lease shipments can be intercepted and stopped by the Axis. Britain can for instance no longer receive the American aid when they do not have enough transport convoys. Therefore, the Atlantic submarine warfare becomes much more important than in Hearts of Iron II.


As time goes by and new doctrines are put in use, firepower increases whereas casualties tend to decrease. Thus, battle mechanics are completely different in 1945 compared to 1914. Not to mention that the advent of tanks and airplanes is a major revolution in military doctrines.

Are victory points present? If so, any changes to how these function and are distributed?


We have reduced the total amount and the number of provinces with victory points. We think that this is a better representation of the world.
And now, to close this Development Diary, here are two screenshots, the first depicting the Caribbean and the second depicting the Horn of Africa. 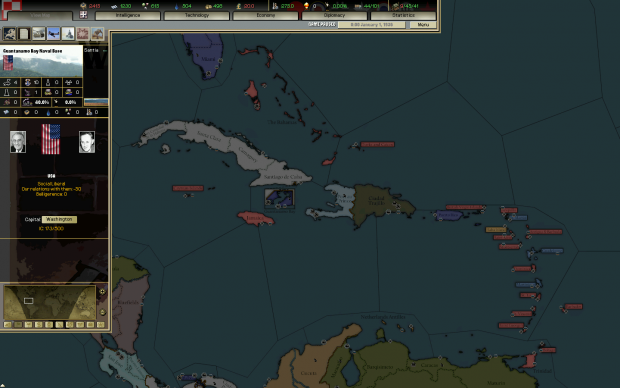 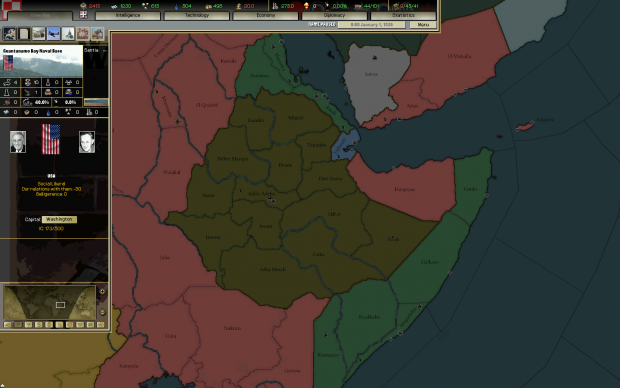