Darkest Hour has a new decision system that makes events in game happen far more dynamic. This dev diary is all about that.

Hello again, this time it's actually me.

We promised you a big one today, and here it is even when it is a bit late.

“Politics is the womb into which war develops”.


State policies and ideologies indeed play a central role in the process, of going to war and how to wage it. Isn’t the Second World War often called a « war of ideologies »?

On the other hand, international relations and diplomacies never ceased to get more complex during the XIXth and XXth centuries. We always felt that the impression to lead, not only the armed forces, but a whole nation, was missing in Hearts of Iron games. We were therefore looking forward to making players actually feel they embodied a Head of State. This is one of the major philosophical design choices that has defined Darkest Hour development.

We believe it will provide an unprecedented experience for those who will get the chance to play our game.

Being a Head of State first starts with taking policy decisions.
In Darkest Hour, you will have the opportunity to dictate a decisive policy change every two years that will have in influence in the years to come, beginning with the ministers that you will appoint. We have also implemented an auto-reminder notification system that can be turned on/off that lets you know when such change is possible.

We all know characters that had a considerable influence for the history of their country. Prime Minister Winston Churchill was often described by British war propaganda as a bulldog ready for duty and fight. Such figure is alleged to have inspired courage to the British people. Darkest Hour reproduces this through a unique minister’s personalities system that is entirely modifiable by users.

Most prominent State figures have already their own personality that in turn affects their country, but there is nothing stopping you from creating indivdual personalities for each minister in the world. 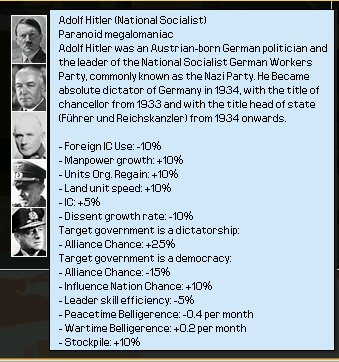 But being a Head of State is also a matter of decisive and even sometimes impulsive policy decisions.

There are two other ways to influence the course of history from a diplomatic perspective in Darkest Hour. Historical events are one of them. We have entirely rewritten the events using our new syntax which opened up much more possibilities for ourselves and modders. There will now be tons of new diplomatic events simulating for instance the United States foreign policy, from the decision to send destroyers to the British Navy to the passing and the enforcement of the Lend-Lease Act.

There will also be situations when you will be able to take immediate decisions when certain conditions are met. We have indeed implemented a unique “Policy decisions” concept in Darkest Hour that allows players to take a specific decision when they think the time is right (provided that they match all requirements). As an example, when playing the 1936 Grand campaign as Germany, a “Reoccupation of Rhineland” decision will be available with specific requirements to be activated. As soon as the player activates the decision, a newspaper notification appears, offering him a little bit of historical background. 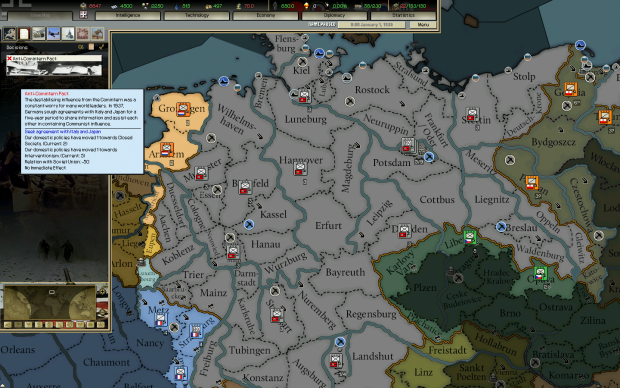 Lastly, the course of events has been made more dynamic.

As players now actually have an influence on when and how certain events occur, they will influence the timeline. As Germany, you can obviously lead your country to war as fast as possible. But be aware that your army or your industrial base may be left unprepared for a long conflict.
Of course the artificial intelligence will always try to surprise you and take decisions when you are not ready for them. For example, playing as China, the Japanese Army will not always invade your country at the same time and the same place so you can just wait for them and push them back when they come.

We truly believe that as a Grand Strategy game, Darkest Hour needed an in-depth diplomatic model.
While we are still polishing it and adding new parts with every build, especially to provide even more user modifiability, this development diary should have given you another glimpse at the very basics of our philosophy and we hope you will appreciate it.

awsomeness, i really cannot wait for it to come out