Playermade Modifications
Hello again, it is monday noon, and that means it is time for another Development Diary. As you should have already seen in the last weeks, one of our main goals was to keep it extremly easy to use your favorite HOI 2 mod with Darkest Hour.

And this week I gonna talk about how this actually gonna work for you, be it as a Modder for one of the Big Projects, someone who would like to play an old mod that is nolonger developed, or just as someone who likes to modify his own game a bit.

The first thing you gonna start to love is that Darkest Hour finally offers full MODDIR support, you no longer need jsgme or individual installations for each mod you use.

You only need one Darkest Hour installation! Copy the mod you fancy in a subfolder the Mod folder.
Pick the mod you like to play the next time you start the game with the launcher. 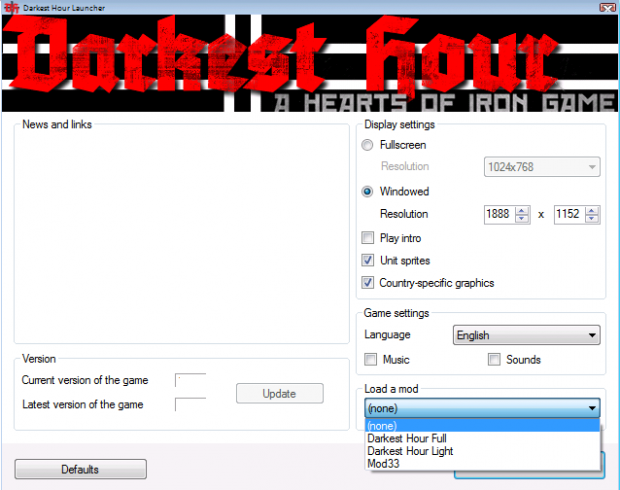 This works of course only when the mod is adapted to Darkest Hour, some bugfixes and new features were not possible without modification that affect basic files, there are few things that need to be changed for a mod to start properly. Don't worry It's not much, and you don't even need real modding experience to do it yourself.

Depending on mod's complexity this could take from 1-2 minutes (Confederate Armageddon) to about 15 minutes (CORE as this mod already use moddir and some paths in its DB files have to be edited and many dummy pictures to be skipped).

In one of our latest version we included a Darkest Hour Mods Pack (located in the Modding documentation folder of your installation ) that can be used for easy Armageddon 1.3 to DH mod conversion. It contains the following files:

These are the files that need to be in the new DH format in order for the game to work and are the only files that modders should worry about when porting their mods to DH.

Notes:
1. This pack is supposed to be Merged with the mod.
2. Only files that were actually changed by the mod, which are included in this pack should actually be updated/replaced by files from the pack. The rest (except 3 - see next) can be skipped as they are identical to DH Core files already installed in the game's main folders.
3. The only files that must be included into mod's folder are \db\ministers.txt, \db\leaders.txt and \db\teams.txt

It really is that straight forward and easy to convert a mod to Darkest Hour, we are testing it often enough to be sure.

Some feedback on the topic from AC of the Kaiserreich team:

AC wrote: Well, as I said the conversion was very simple, basically because the Kaiserreich Team never messed with misc.txt and other configuration files (as far as I know). So, conversion is actually not the best word to describe this, as the process didn't involve much more then copying the files to the Mod folder. The real conversion of the Kaiserreich for DH will use the new map and all the new features offered by DH. This is a simple "adaptation" of the KR mod from Armageddon to Darkest Hour.

However, as soon as a new game starts, it is possible to see how the Mod benefitted from this adaptation. At the start of the game, a reminder tells me that I can move my political slider: very useful to avoid missing this opportunity at the beginning of each year!

After unpausing the game, the performance increase is immediately noticeable and the game flows quickly without problems or CTDs. In my opinion, this is the biggest benefit for a casual player, but there is much more: the automated spying system, ... * peep* *peep* *peep* ..., the many useful tooltips (for example in the research tab), the colorscale of the unit and the pictures close to the units name, the * peep* for the air and naval missions and other smaller, simpler, but nonetheless useful things.

If you want, you can add that I've been using Kaiserreich over DH since May and I've developed current version 1.2 of the KR Arma Mod using DH! This was very useful especially because thanks to the debug log we could fix many (40 maybe) wrong minister traits, some problems with leaders, mistakes in the Tech Teams (missing components) and a bunch of other. So, from a certain point of view, you could say that the current version of Kaiserreich Mod for Armageddon already benefitted from DH.

I've written about many things still undisclosed, feel free to change my words as you like.


I did. *g* White & Sea as always guys. But you can Sea even when using DH without most of its new features there are quite a lot of improvements to talk about, even if we won't talk about them yet.

Here's a list of mods that already officially announced porting to DH:

I hope you enjoyed those new informations at least a bit. See you next week for a new development diary. Take care. 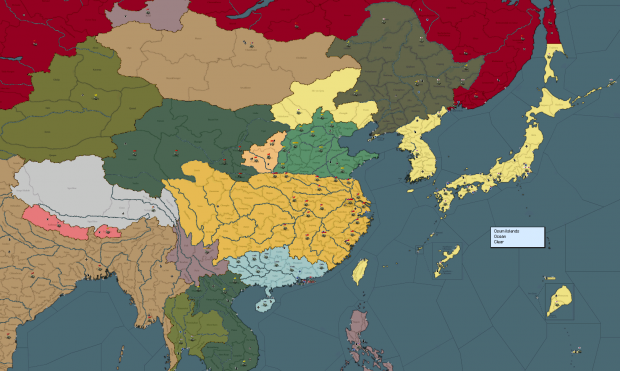