'Introduction: Some history'
Spying in DD/Arma 1.2 had many bugs: missions that do not work for the AI - including counter-intelligence, broken AI mission selection code, and incorrect messages to name just few. Once we fixed all known bugs in the code and ran some tests using advanced logging (logger is part of DH) we found that in a game AI countries do tens of thousands send and kill spy missions outperforming any player because of the micromanagement involved in the spying and very few real missions (about 10%). It was clear for us that the old system needed to be changed and after some brainstorming and few tries Martin and Chris came up with the spy system used in Arma 1.3.

Its main features are:
- Fixed spying AI - it can do any mission
- Send/kill spies missions removed and replaced with Spy network levels (0..20)
- increased game speed
- all modifiers exported to spy_cost.txt and AI files
- there are more here that are out of my mind after 2 years

These changes while to drastic for a patch and not welcomed by all modders at the time paved the road to the auto-spying system we implemented in DH.

'All warfare if based on deception'
That quote from Sun Tzu enlightens the prominent role played by intelligence operations in times of war. But while popular myths have been created around a few people like Mata Hari or Joseph Sorge, intelligence and counter-intelligence operations have truly been of a great importance in the events of two World Wars witnessed by the XXth century. Darkest Hour therefore intends to put a certain emphasis on this matter.

Darkest Hour spying system addresses two main issues which are the realism of the intelligence operations and their planning in the long-run as a Head of State.
The first thing that you need to know is that there two modes: manual and semi-automatic intelligence. While the manual mode has many similarities with Hearts of Iron II spying system, the semi-automatic is much more interesting. There you can allocate a certain part of the national income to intelligence operations. There are also others factors that you can play with such as spy activity or the minimum level of infiltration required prior to any foreign operation.

Furthermore, as the Head of your State, you can assign generic or specific priorities to your intelligence services. Playing the United Kingdom, you might for instance be willing to grab more informations about Nazi Germany. Specific country priorities can therefore be set in that regard.

But there are also missions specific priorities which allow you tell your intelligence services what specific mission to perform (either globally or in a certain country). You will for instance be able to perform only industry sabotage in one country or couple it with industrial espionage, provided that you need two times more sabotage missions.

That way, you have a relative control over the operations led by your intelligence agency. You are also encouraged to plan your spying strategy in the long run and check the reports on a regular basis when you used to be overwhelmed with micro management in Hearts of Iron II (where you had to send every spy and perform every operation manually). Hence Darkest Hour spying system is not a clicks contest but instead, a panel that lets you plan your policy in the long run.
This was also a matter of realism because as a Head of State, you obviously have a certain level of involvement, which sending all spies one by one should be excluded from.

Automation:
- Can be enabled or disabled
- Even when enable players still can do any mission to any country manually if they want
- auto-increase of spy levels to manually set Max level (0..20)
- set spy money threshold (use money above XXX)
- Min. spy level threshold before try to do any foreign missions (0..20)
- Spy activity
- Min chances for every spy mission - do no try a mission if chances are less
- Can add/remove countries from spying list
- Can set country priority for each country in the list
- Can set missions priority for each country in the list
- Can apply same priorities to all countries at once
- Can clear countries list at once

Moddability
We are also looking forward to making Darkest Hour as mod friendly as possible.
Thus, many parameters will be subject to changes in mods, such as:

And mission basic costs and chances

And here are the two screen-shots of this week. 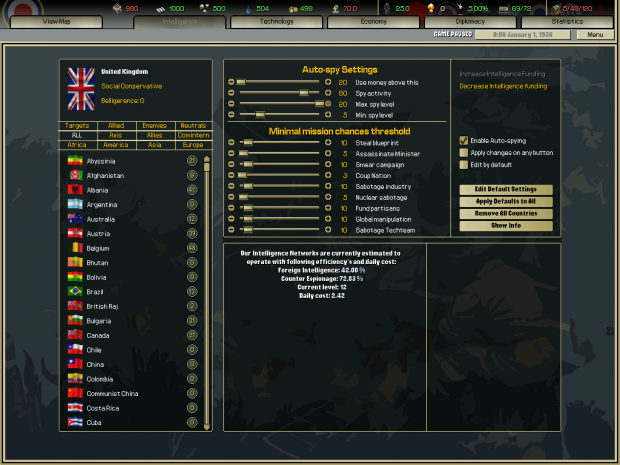 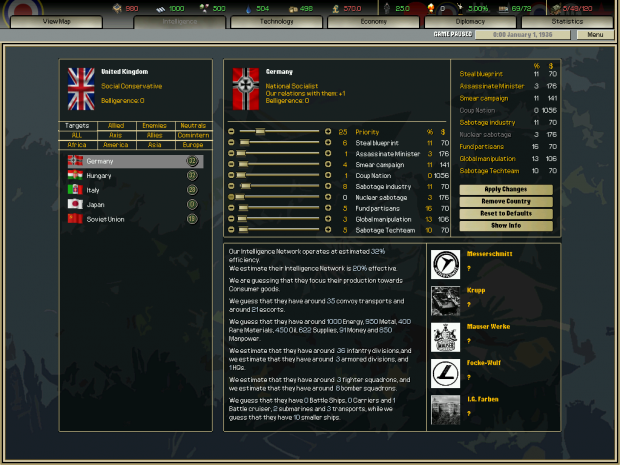