What is Darkest Hour and who are its the developers?

We know you have been all eager to grab fresh information about the game : what is Darkest Hour and who are its the developers?

Darkest Hour Core (no relation to the mod), in its early stages still know as "The Project", can be viewed as a continuation of the 1.3 patch for Armageddon because it is based on it and is nearly 100% compatible with all existing 1.3 mods, and offers for the first time full moddir support.
What started as a small project to fix the remaining hard-coded bugs, after the last beta patch became much more over the last years.
Starting with initial bug fixes, a huge amount of code optimization to increase performance quickly followed. Hard-coded modifiers were then moved to moddable files, Hard-coded limitations removed, and then new features added.
Over the weeks, it became pretty obvious that we were no longer aiming for a patch to fix the last bugs, but for a new platform as standard for the HOI community. One that would offer modders what they have been asking for over the years and to keep our beloved mods alive and enjoyable for many years to come. For it has indeed been developed by fans and modders.

By fans, for the fans
MartinBG, who was the Lead programmer of HOI2 Armageddon Patch Project, and Gormadoc, Lead programmer on the Community Database Cleanup Project, started the whole thing more then two years ago.
Fernando Torres developer of World in Flames mod, who has been our most vocal Developer in the forum until now, joined up shortly after, initially aiming to create a new WIF mod for the new improved engine. But things went a bit different, and out of the idea to create an independent mod emerged Darkest Hour Full, the first "mod" for Darkest Hour using the full potential of the new code right from scratch.

Over time even more people joined the team, some as bug testers, others as active contributors.

As for myself, I actually joined the DH team pretty late in the progress, only 6 months ago, and I can't really offer any real recognition value for you guys as I have been not very active in the Paradox community and basically only enjoyed playing the games. But I think you will not hold that against me for long.

What do you guys do?
Although the borders are a bit blurry, as all of us work on the database from time to time (add the odd event, fix one thing or another), let me try to give you an idea of who is in charge in our development team:

I think we now have more than 30 people who are helping out to a different degree, and listing all of them would just be too much for this diary.This here is just a (not so) short list for a start with those who contributed the most over the last months in no specific order:

Mumia allowed as to use the E3 map as a base for our new map, and helped with most of the initial concepts.

Eginhard 38 from WIF did an incredible job when he finalized the designs for the new map, always standing on the edge balancing AI capabilities and geographic reality.

Arturius from the 1914 mod, well you can think for yourself where he contributes.

Bizon from the NWO mod made our game launcher, helped out with translations and the implementation of new minors.

^AC^ from Kaiserreich helped out adapting vanilla scenarios to the new map and translations.

Rhysaxiel from WIF is working on event chains for 1914 and coordinating the pre-WW2 scenarios.

tedescoo from Turning Point and BIP helped out with translations and as a tester.

Jrhindo from the Yugoslavian Wars helped with translations and ideas.

The famous sonofliberty has outdone himself in the last weeks as one of our main testers, and offered a lot input in many design aspects.

Cardus helped with new OOB for Italy and Abyssinia, making the Ethiopian war much more interesting..

TeutonburgerW from the Minor Graphics Mod has contributed ideas for new minors a bit of modding, graphics, beta-testing.

Miihkali from Anatolian Wars Mod has done some scenario and event design, and some graphical help. Ideas, suggestions and little historical research.

WilhelmII from Gamerkollektiv helped with some graphics in addition to the obligatory beta-testing.

thewookie1 added the first concept for the inclusion of the Transsibirian Railroad.

And many more that haven't been that active in the last months, like Koenig from Mod33, 49h from WIF, GAGA Extreme from the GAGA Tech Mod, and a lot others I simply forgot... I elaborate further on their contributions in future development diaries.

This should give you a glimpse of who has been involved in this, how many familiar names to find, and how many of those are still actively developing mods out there. Thus you can draw your own conclusions about what you can expect for the future. Expect for instance some mods to be available for DH from day one...

Here are now a few words from our contributors:

TeutonburgerW wrote: Being a long time HOI player, there were several things I've always dreamed of if they would come true but I thought the engine was too old and it was better to adapt and start playing HOI3. That was, until Rayan (aka Fernando Torres) invited me to contribute to what is now called Darkest Hour. Most of the things I've ever wanted (a smarter AI, a better map, automated stuff and higher moddability plus a whole lot more) was there. I'm very pleased that the DH development team listened so much on us "modders" as well as long time players during the development phase; what we enjoyed, what we didn't enjoy and, of course what we wanted to make DH the best WW simulation out there!


Inner wrote: When I was invited to the Team, i knew only little, until i got some screenshots from a Beta Build. I was really impressed and eventually agreed to help them.
My contributions are mostly graphics, beta testing and recruiting new contributors. Every new Beta is better than the last one and for the first time i have the feeling to play the HoI game I always wanted...


AC wrote: Darkest Hour is a dream come true for me. A game made by fans for the fans... or even better, made by modders for the modders. We have assembled such a good team, that worked together for months (years, some could say) with one objective in mind: to create a game enjoyable by the fans and loved by the modders! Being a part of this is an honor, even if for now my contributions have been limited to beta testing, suggestions and translation.


And maybe a word from Mumia, one of our map geeks (he usually does not communicate with us except to post with strange words and show awesome maps he just drawn but maybe he will make an exception for you...)

mumia wrote: 'Me no spiking Inglese'.

Design philosphy
Our philosophy is to stay true to the community and provide the most fun for players as well as the best platform for modders.

We think it first starts with being honest with the fans. And there is one thing that has been claimed around that we wanted to correct. The game timeline is indeed set to span from 1914 to 1964, which means there will be small and large scenarios available throughout this period. What it does not mean is that there would be a giant scenario allowing to play straight from 1914 to 1964.
It is obviously unrealistic to think that a game like Darkest Hour could cover all (un)historical possibilities for such long period of time (yet).

On the other hand, we focused on a few unhistorical and yet plausible outcomes, be it during or after the First World War or during the Second. We shall not go into details for now but you can rest assured that Darkest Hour rejects the sandbox approach.

The other thing is, we are here to stay, even after two years we are still far from reaching the limits of the Europa engine, and we have all intentions to keep developing Darkest Hour further for a long time to come.

We are still looking for new contributors and testers, as this is basically a project from the community for the community. We will be looking forward to helping modders prepare their contribution even before the release date (we are aiming for November release). Feel free to contact us at darkest.hour.team(at)gmail(dot)com.

We are also going to answer a few general questions later today. But please don't expect too much details yet, as there is still some time left and we need to keep you curious!
Thus, in-depth explanations are left for the following development diaries.

The second development diary will be dealing with maps!
So see you around folks, and take care. 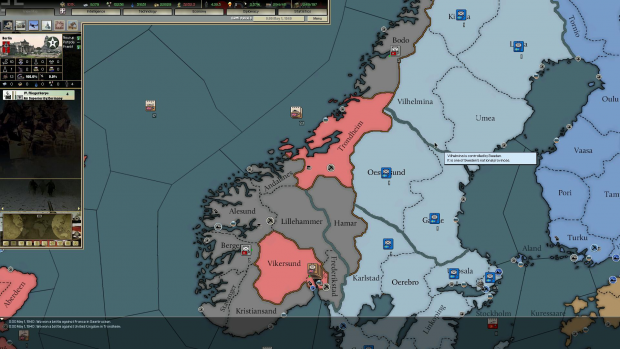