A customizable User Interface is taken for granted by most mods, however the Quake UI has been unchangeable for a long time until CSQC came along!

The Quake User Interface (UI) layouts are hard coded in the engine, there is no customization options or config file that changes them. Both Quake expansions packs added more weapons and items, however their UIs are also unchangeable. Essentially the Quake UIs are the bane of mod developers because they are so inflexible and impossible to change without modifying the actual engine!

There are two UIs in quake that appear along the bottom of the screen and are selected by using the + or - keys. The first one shows the essential player information like health and armour and the ammo for the currently selected weapon. The second UI (expands upward on top of first UI) shows the extra inventory information like keys, runes, active powerups and what weapons and ammo has been collected so far. 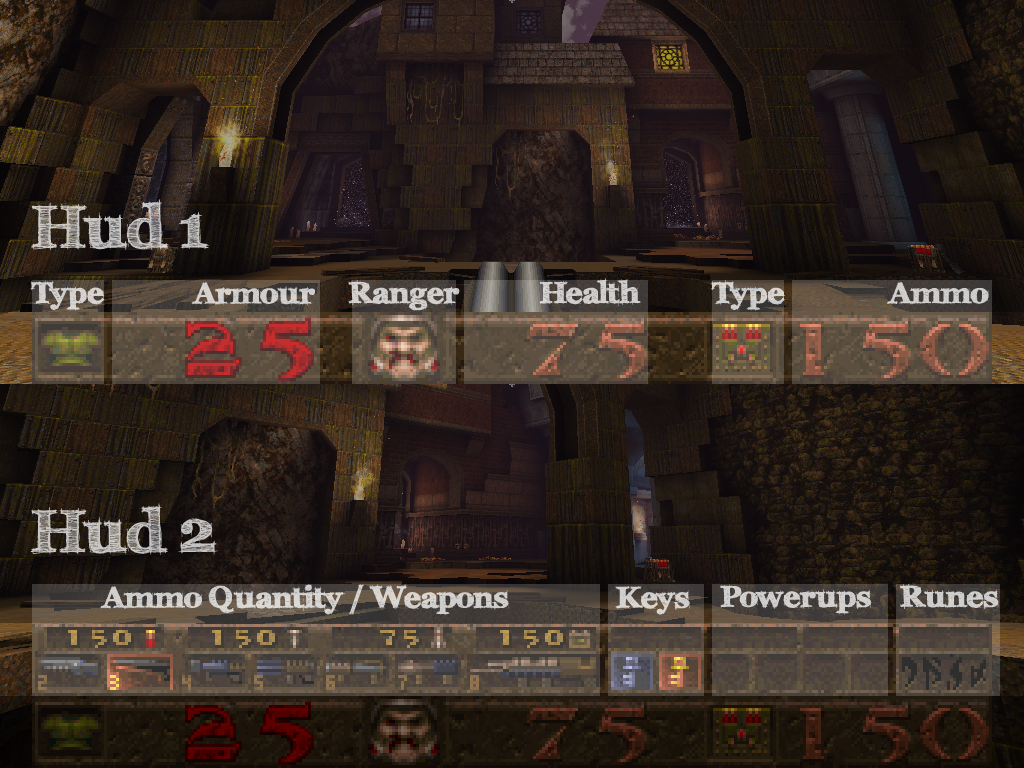 Arcane Dimensions has lots of new elements (arcane keys, weapons and powerups) and luckily the latest Quake engines offer something called Client Server QuakeC (CSQC) which allows the creation of new UI layouts and content. Creating a new UI can be a daunting task and at the time it seemed like a good idea to start with adding all the new AD UI elements to the existing Quake UI first.

The initial problem is space on the second UI bar and Quake expansion pack 1 fixed this issue by moving the silver and gold keys to the first UI bar where they are better suited because they often appear in most maps anyway. The Lightning gun icon was then squashed to allow room for the axe and the runes were turned on their side to allow for the 'vania' items below. Finally there was enough space for the Arcane keys (optional keys found in AD maps) to exist above the Quake powerups. 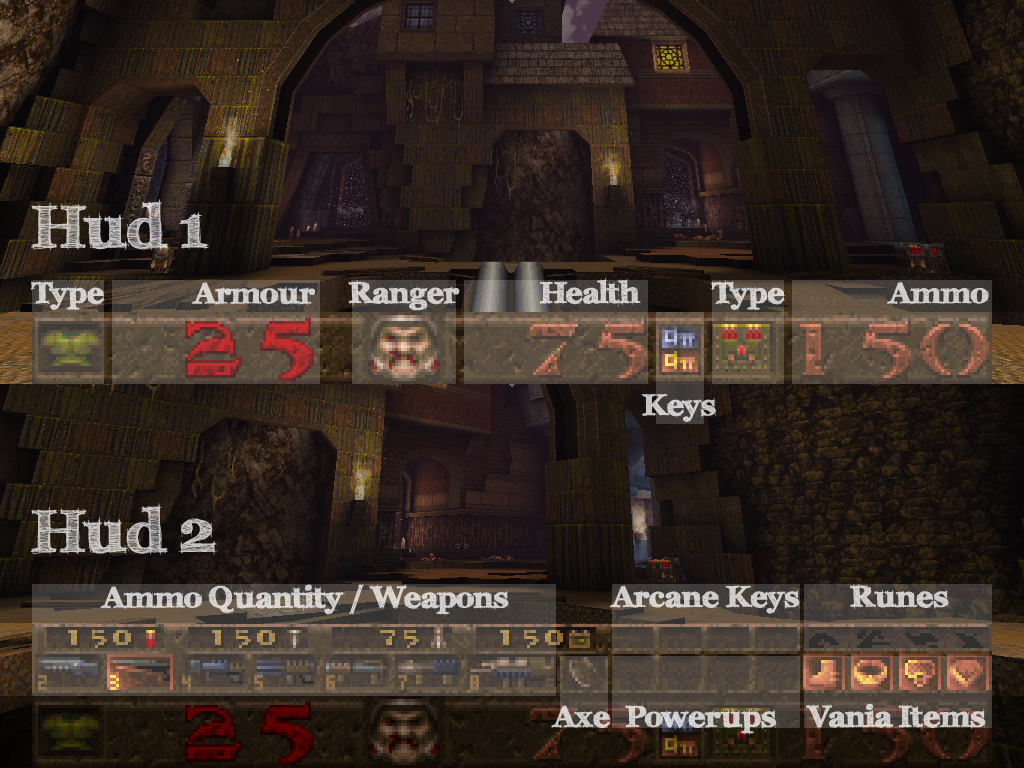 The default Arcane Dimensions UI is 0 and has all the new AD elements squeezed into the original Quake UI layout. To change the AD UI to a different layout (Currently there are 7 available) either use the console variable 'scratch1' or open up the 'quake.rc' text file and change the variable at the bottom of the file (as shown below) instead. 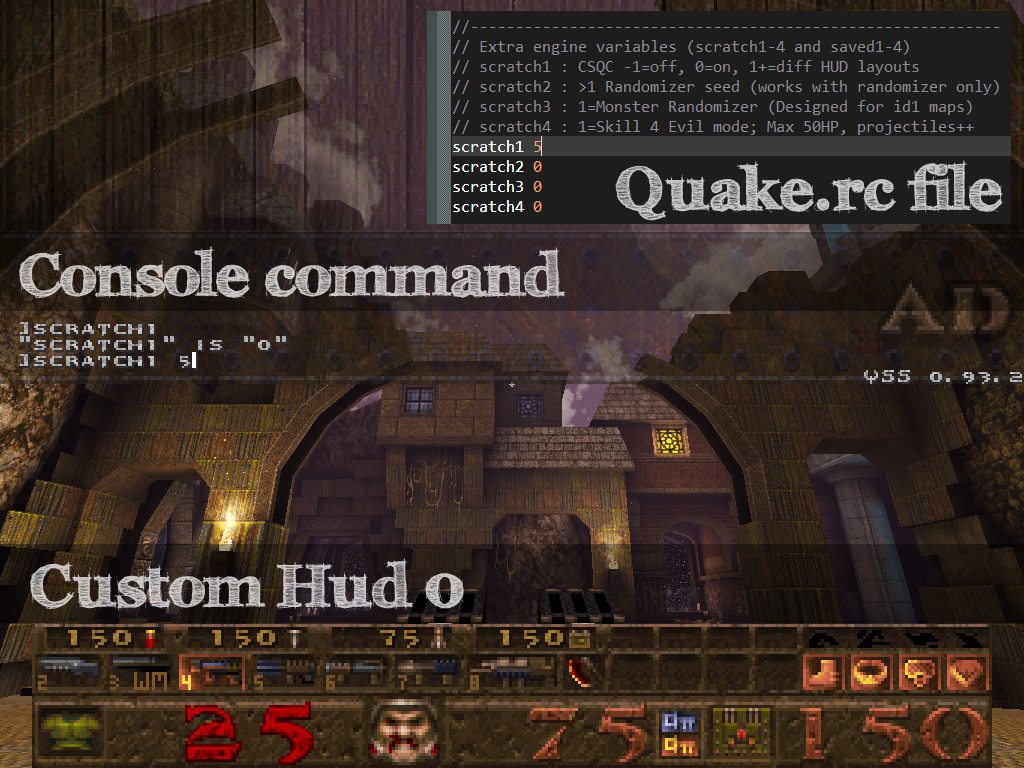 The first Arcane Dimensions UI is very similar to the default Quake UI, however the second (inventory) bar is split either side so that the currently selected weapon is not hidden. This UI is designed for a wide screen (at least 1440) format because the extra side elements are fixed to the first UI bar and don't move around if a lower screen resolution is used. 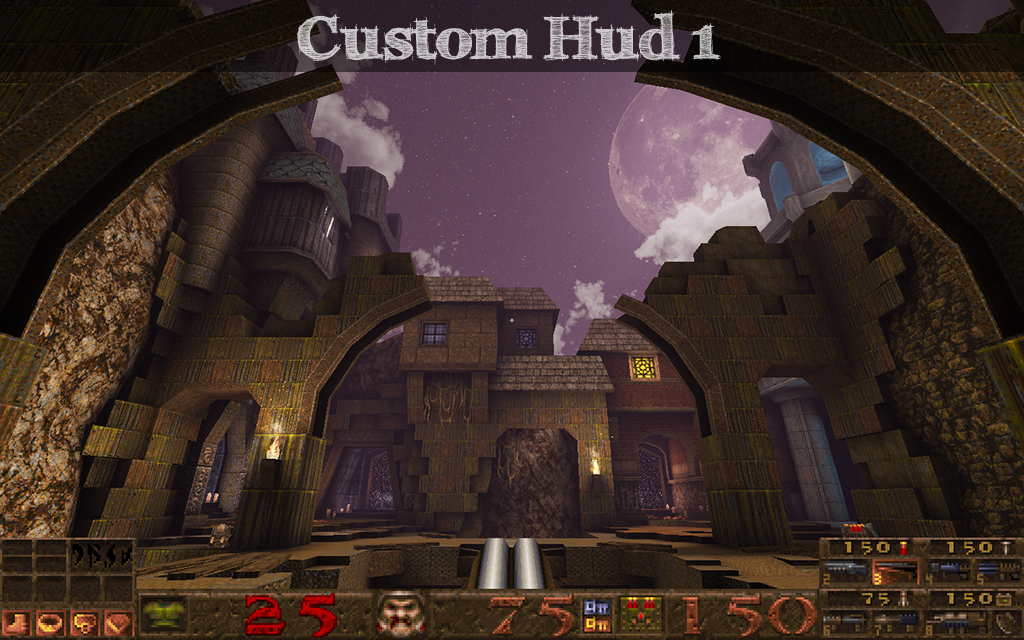 The second Arcane Dimensions UI has the second (inventory) UI bar elements split and fixed to the side of the screen instead. This allows for the new UI layout to cope with variable screenshot resolutions without losing sight of the extra UI elements on either side. 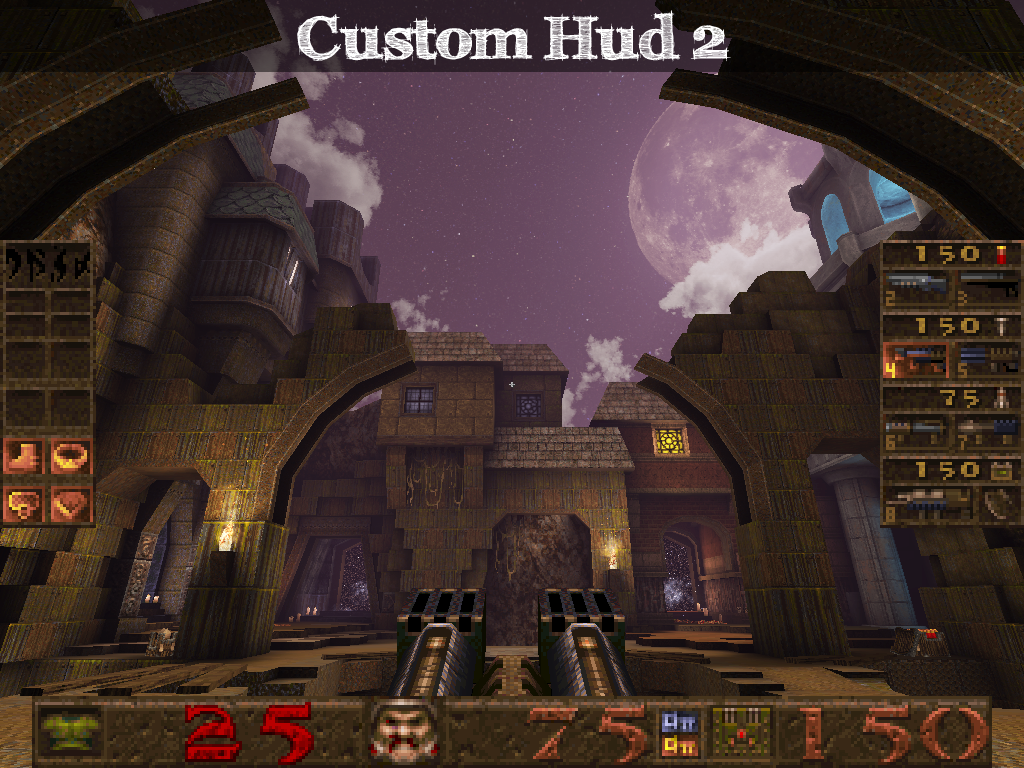 The fourth Arcane Dimensions UI is inspired by Doom with the currently selected weapon fully displayed in the middle and all the UI elements compressed either side into two blocks, which will move further apart if a higher screen resolution is selected. 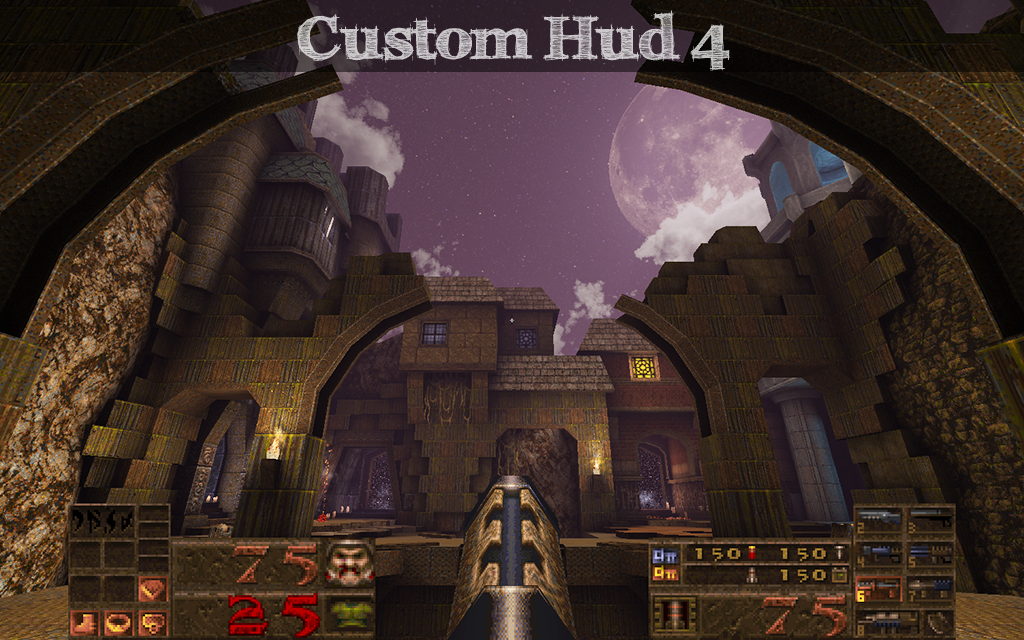 The fifth Arcane Dimensions UI is inspired by Quake Champions with the currently selected weapon fully displayed in the middle and all the UI elements push to the corner and edges of the screen. This layout will cope very well with different screen resolutions and all the UI background graphics are as uncluttered as possible so that the UI is not distracting. 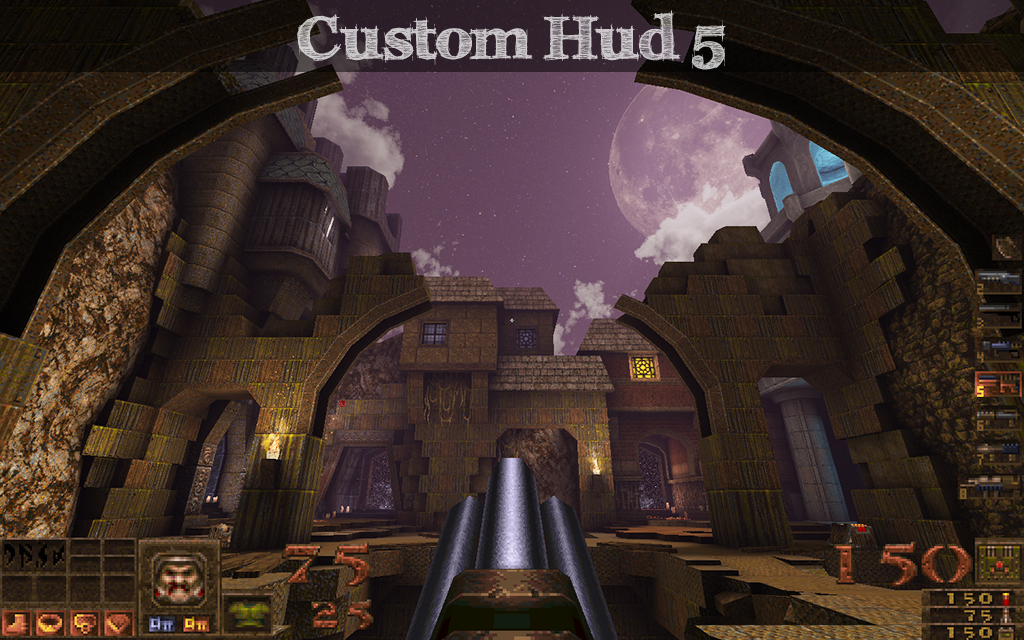 The sixth Arcane Dimensions UI is designed for massive wide screen (1920+) resolutions with all the UI elements on one giant bar across the bottom. The UI layout does not cope with or change if lower screen resolutions are used and the new UI elements can be hidden off screen. 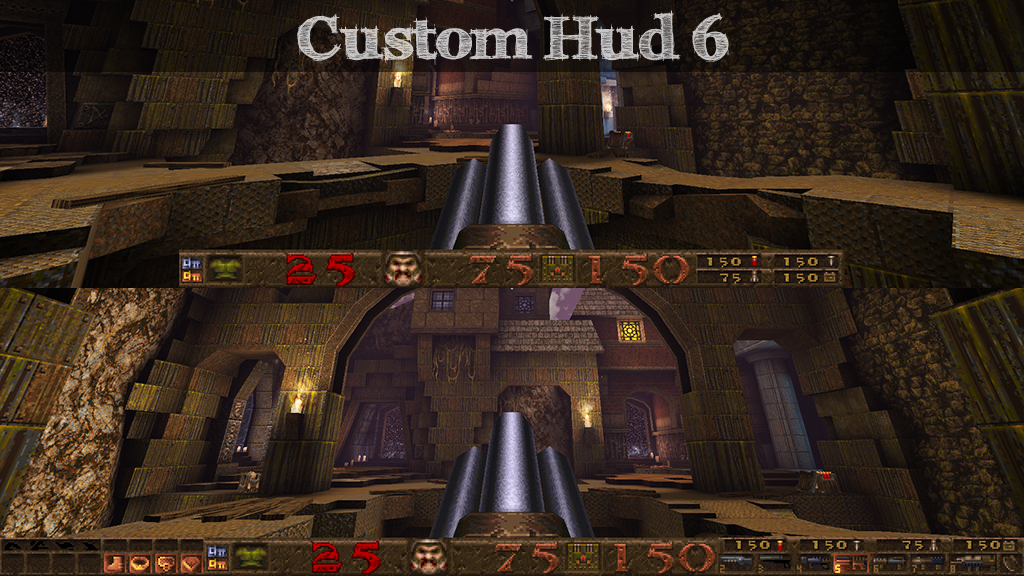 The seventh Arcane Dimensions UI is inspired by Diabotical with all the UI elements scattered below and around the crosshair in the middle. This is a minimal distraction UI for players who want to purely focus on the crosshair at all times and most of the UI elements have transparent backgrounds. 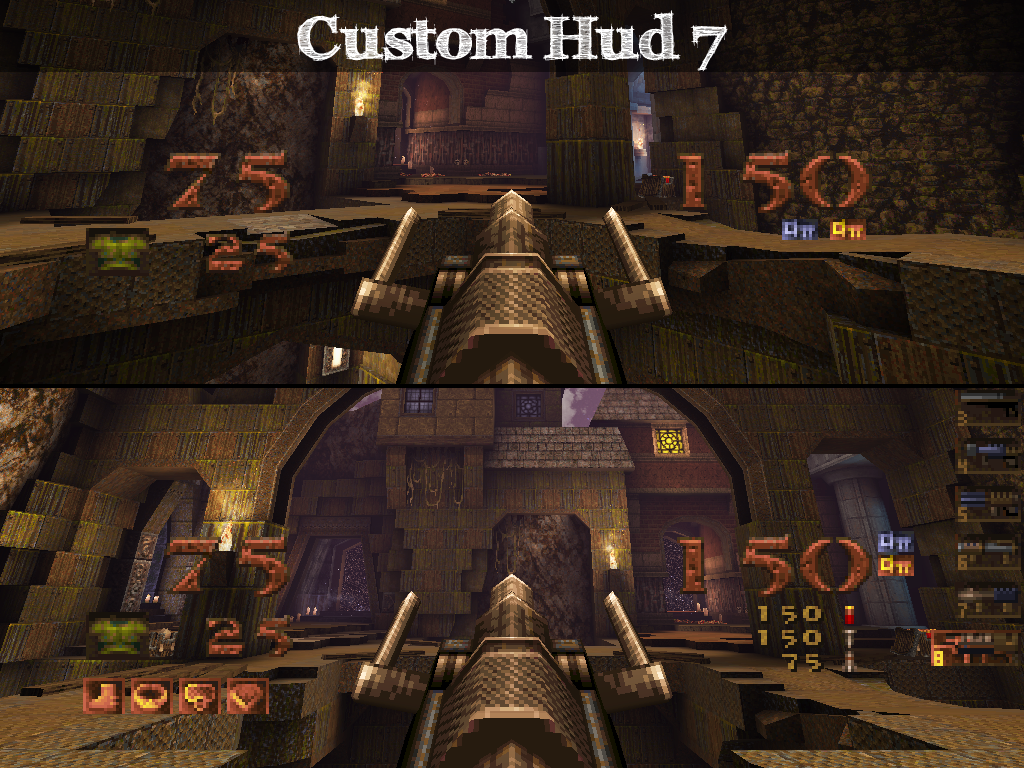 There is also a hidden option to reverse the User Interfaces to the top of the screen, however not all UIs support this option and it depends on the initial layout. To try this option add 100 to the UI number, like for example UI 5 becomes 105 and see if this suits your taste! 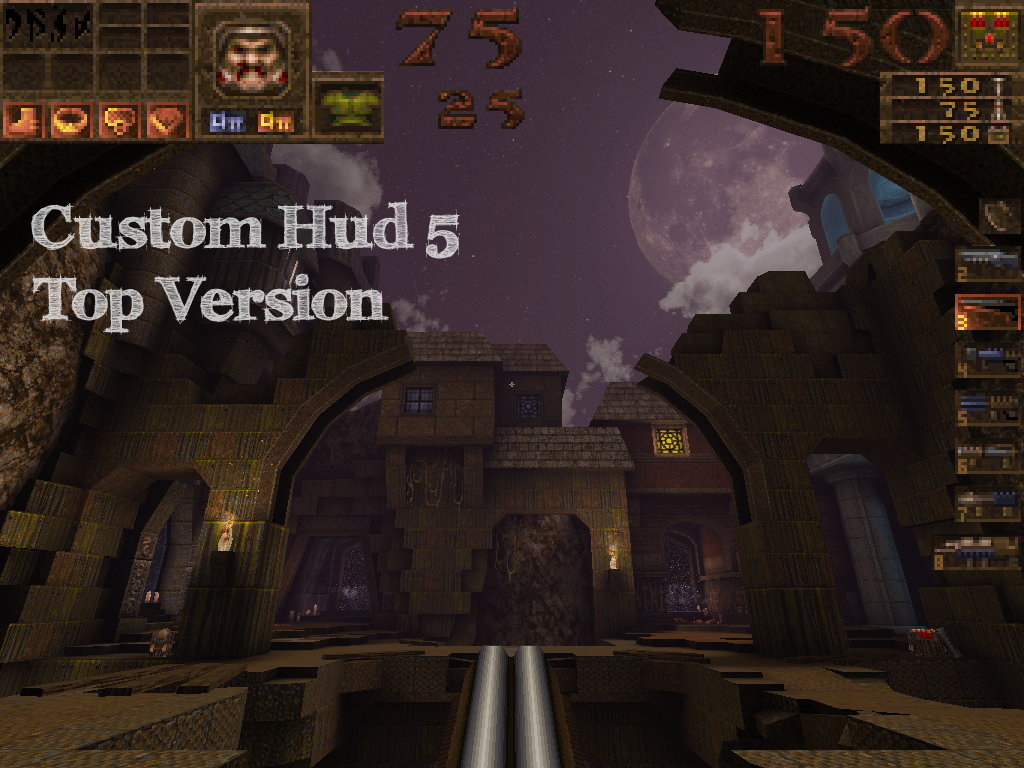 Your articles are very well made simonoc!

I have no idea how to get these HUDs to work and I've been trying for 2 hours... I just want to use HUD 5.

Edit: You must use GS-Spiked for this to work.

Sorry, the CSQC custom HUDS are advanced engine only, should of made it clearer in the article. Engines supported = QS-Spike, FTE and DarkPlaces (latest version only)

is it fit for any mod or even normal quake?

These new custom HUDs are designed for AD only. The source code (QuakeC) for all of these HUDs are available on github if any other mod wants to create their own version.

Is there a way to make them translucent?

Quakespasm Spiked has the console command "scr_sbaralpha", however its not 100% consistent with every element on the new HUDs because I did not design all the elements to use alpha.

I noticed that custom hud 0 obscures the gun, is there any way to move the view model up? I'm currently using QS-Spiked

You can use the +/- keys to extend the HUD up/down to reveal the gun underneath.