I mentioned yesterday how hats played a big role in Boot Hill Heroes as a way to learn new Vantages to grow and customize your character. In Boot Hill Bounties, hats also play a large role but work a little differently and function more like traditional RPG “job classes”.

Each hat, rather than each character, has its own customizable set of Vantages. So if a character takes off one hat, and plops another on their head, they may play very differently. Even though, Boot HIll Bounties still only has four playable characters, it has dozens of hats that are similar to playing as a different character.

Now each hat, like a job class, can also level up as the hat gains Vantage Points (VP) during battle. New Vantages are unlocked when a hat gains a level and the player must decide which of these Vantages should be set since, at first, only four Vantages can be available at once. 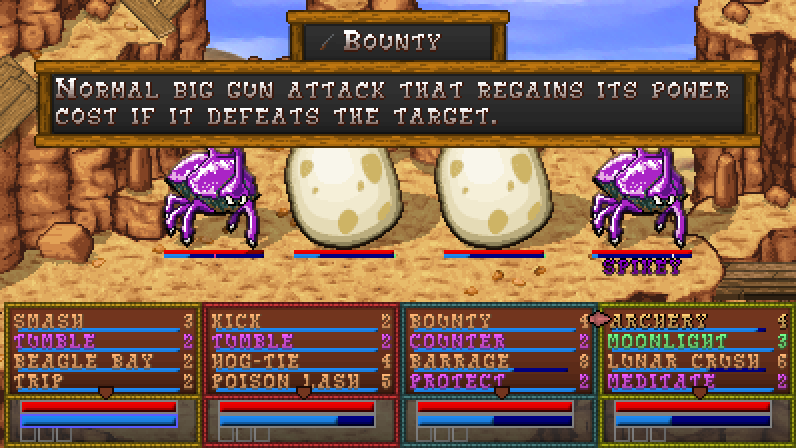 But hats can also unlock extra spaces for new Vantages. So it’s possible to increase the number of available Vantages at once to up to six. But you have to get your hats to pretty high levels before this happens!

Also, at high levels, hats will transform some of its earlier Vantages into Deluxe Vantages. Deluxe Vantages can be transferred to any other hat. For example, the Stetson unlocks the Vatnage Trip at level 4, and at level 8 Trip evolves into a Deluxe Vantage. So now Trip can be set in another of Kid’s hats, like the Boater or Bird’s Nest.

Deluxe Vantages retain some of the overall customizability of Boot Hill Heroes, while also making individual hats feel distinct. Players should try to have certain hats customized for certain situations.

The maximum level a hat can reach is level 10. On level 10, a hat unlocks its most devastating and powerful signature Vantage. This Vantage is always unique to that particular hat. But levelling a hat to 10 is no easy feat and it’s more likely players will switch between many new hats before sticking with a single hat until it reaches level 10.

Well that was a lot of game mechanics to get through! Now I’m starving for something to eat. But I’ll have to wait until tomorrow!