Post feature RSS Boss fights – what losses are you willing to take?

When it comes to the upcoming rework, one of the final pieces of the puzzle are Boss Fights. They are not being added for the sake of just improving WarZone, but also introduce some new mechanics, an extra connection with BootCamp and expand the arsenal of progression strategies.

The one thing the previous version was really missing, are “stepping stones” or progression obstacles to make War Zone feel much less linear. Making it feel more fun and make users think how to tackle these big challenges was one of our main goals here. We initially wanted to achieve this with our defense mechanic, but it simply doesn’t work as we wanted to, as it’s really tricky to handle progression/rewards with it and it doesn’t really fit well into our core game loop. 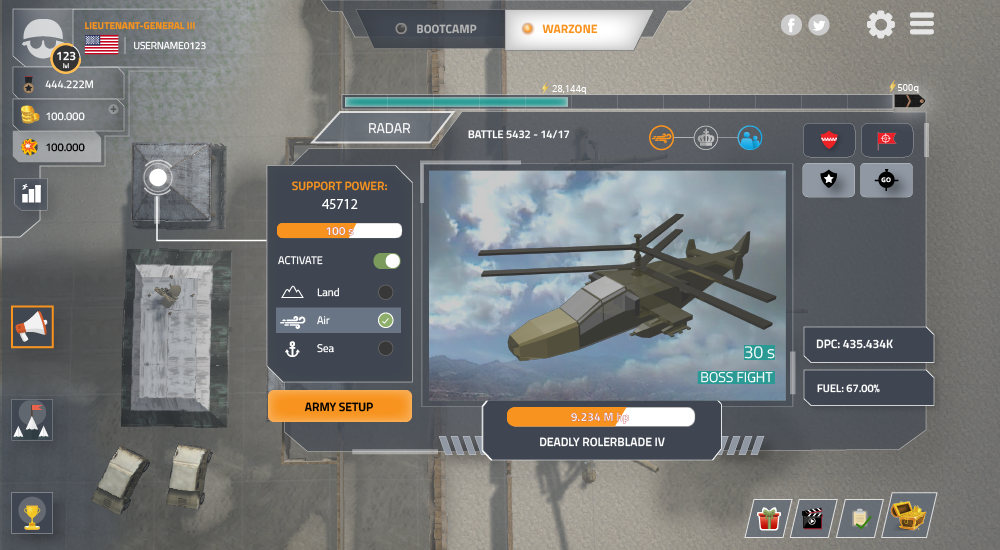 So with the latest rework, defense was removed, and Boss Battles are (sort of) taking its place, but in a much cooler way!

Boss Battles will be extra tough enemies (appear every 5th battle – note that every 10th battle is a Player vs. Player -> PvP battle), that you will have to battle your way through in a limited time in order to be able to progress to further battles. Like with defense, attacking in boss battles will not consume any fuel, but it will consume support units attack points – if you’ll be using support to help you battle through them. Winning will reward you with big gold piles and masses of Battle Stars!

If the boss is too strong for you and manages to fend you off, you will have two options:
a) Either choose to send your support troops (sacrifice function) to finish the Boss off, at the cost of losing up to 10% of your overall support units.

b) Be forced to retreat to the previous battle, fight more enemies, gain more Battle Stars and as you increase your strength have another go at overwhelming the Boss! Note that, if you’re pushed back, you will have to clear the battlefield completely before being able to strike the boss again.

The timed double Damage Per Click (DPC) upgrade, and even the 2xDPC and 3xDPC upgrades from the shop will now become a huge asset to help you deal with these Boss fights efficiently. On top of having to consider using your support troops to help you finish the Boss fights more easily – as remember, any support attacks spent in a Boss Fight will NOT be returned in case you lose. So will you try and go for the “optimal damage” approach and try to save every single support attack and risk having to sacrifice your troops/be fended off, or will you put all of your cards on the table to ensure you can progress to the next battle ?

A lot of new strategies will open up now, and how players deal with Bosses at a certain time can make all the difference when it comes to reaching the top rankings. Blast your way through, calculate things down to the click or sacrifice a part of your long term progress to make sure you can pass on to the next battle are all perfectly acceptable options… which one is the best, will depends on the circumstances. Strategize, adapt, conquer.